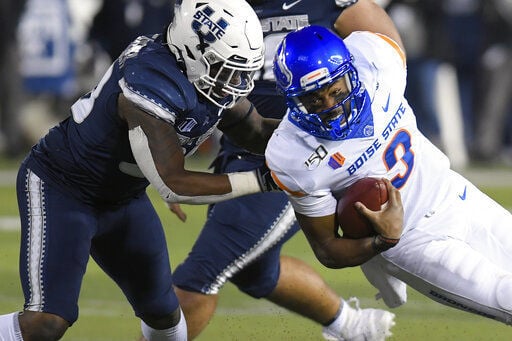 LARAMIE — The more lucrative television contract Wyoming and the rest of the Mountain West have been anticipating for months is official — and with a new partner in the mix.

The league has reached a six-year, $270-million media rights agreement with CBS Sports and FOX, MW commissioner Craig Thompson announced Thursday. The deal will go into effect July 1 and run through the 2025-26 season.

CBS remains the primary rights holder, but FOX’s inclusion means the network will get the rights to the games that were carried on ESPN’s family of networks as part of the current media rights package, which includes a $1.1-million annual payout for each member school other than Hawaii, a football-only member. The new deal is worth approximately $45 million per year, which is expected to nearly quadruple each school’s cut to more than $4 million annually.

“It was clear from my first conversations with FOX Sports national network president Mark Silverman and executive vice president Larry Jones that the level of commitment for FOX and what they’re making towards college sports both on FOX broadcasts and FS1 is tremendous,” Thompson said. “Also in that conversation, early conversations with Mark and Larry, they both made it clear they had a significant interest in having the Mountain West as part of the FOX family and helping and desirous of us growing the conference.”

Boise State will continue to get the additional revenue it receives under the current deal to negotiate its home games separately. As part of the new deal, FOX will get those exclusive rights that ESPN previously held while CBS will get rights to the Broncos’ conference road games.

Thompson said this will likely be the last contract in which Boise State gets to negotiate its home games separately — a stipulation that was allowed by the conference in 2012 as incentive for Boise State to stay in the MW after the school announced plans to join the Big East. As part of the current deal, Boise State receives $1.8 million annually in additional revenue.

As for the length of the deal, Thompson said six years was the maximum the league was willing to go given the ever-changing media landscape.

Keep reading for FREE!
Enjoy more articles by signing up or logging in. No credit card required.
Log in Sign up {{featured_button_text}}
Football

“The bottom line is eight, nine or 10 years, we just could not justify because of the changes potentially we’ll see in the marketplace and the other rights fees that are going to open up in the next five or six years,” Thompson said.

A concern for Wyoming fans and those around the league has always been the late start times for football games, but that’s not changing much. The broadcast windows for FOX will be 11 a.m. to 7:45 p.m. on Saturdays and 5:30 p.m. to 7:45 p.m. on Fridays. That window on both days extends to 8 p.m. for CBS, though that eliminates the possibility of any kickoffs later than that. Some men’s basketball games will start as late as 9 p.m. on the networks.

Thompson said there won’t be a limit as to how many times each team can appear in the late time slot, but just because there is one, particularly with FOX, doesn’t necessarily mean MW teams will always be playing in it. Mark Silverman, FOX Sports president of national networks, noted the network also has a deal with the Pac-12, a league with most of its members residing in the Pacific Time Zone and therefore an hour behind many MW member locations.

That could make it easier to put a Pac-12 game in the late slot, but Silverman said it’s too early to know for sure how many late kicks will be slotted for the MW. Wyoming played six night games last season, including an 8:15 p.m. local kick at Boise State, an 8:30 p.m. local kick at San Diego State and a 7:30 p.m. local start against rival Colorado State on a Friday.

“One of the benefits of obtaining these rights was to fill a 7 or 8 roughly local kick but not the sole one,” Silverman said. “I would expect some game times to be more in the afternoon, some to be in the evening. Occasionally, we’d love to get one actually the opposite, on the early side, which is really what we’ve been focused on as a network, that early time frame literally. It was the second-highest rated window in all of college football last year, our noon eastern time. We’re looking all over the board. We’re not only focused on late night.”

FOX or FS1 will televise the MW football championship game while CBS will continue to broadcast the men’s basketball tournament title game.

Outside of the 10 potential football and men’s basketball games that could be carried on CBS All-Access, the new deal doesn’t include any streaming services. But the conference is still negotiating its third-tier rights, which could change that, Thompson said.