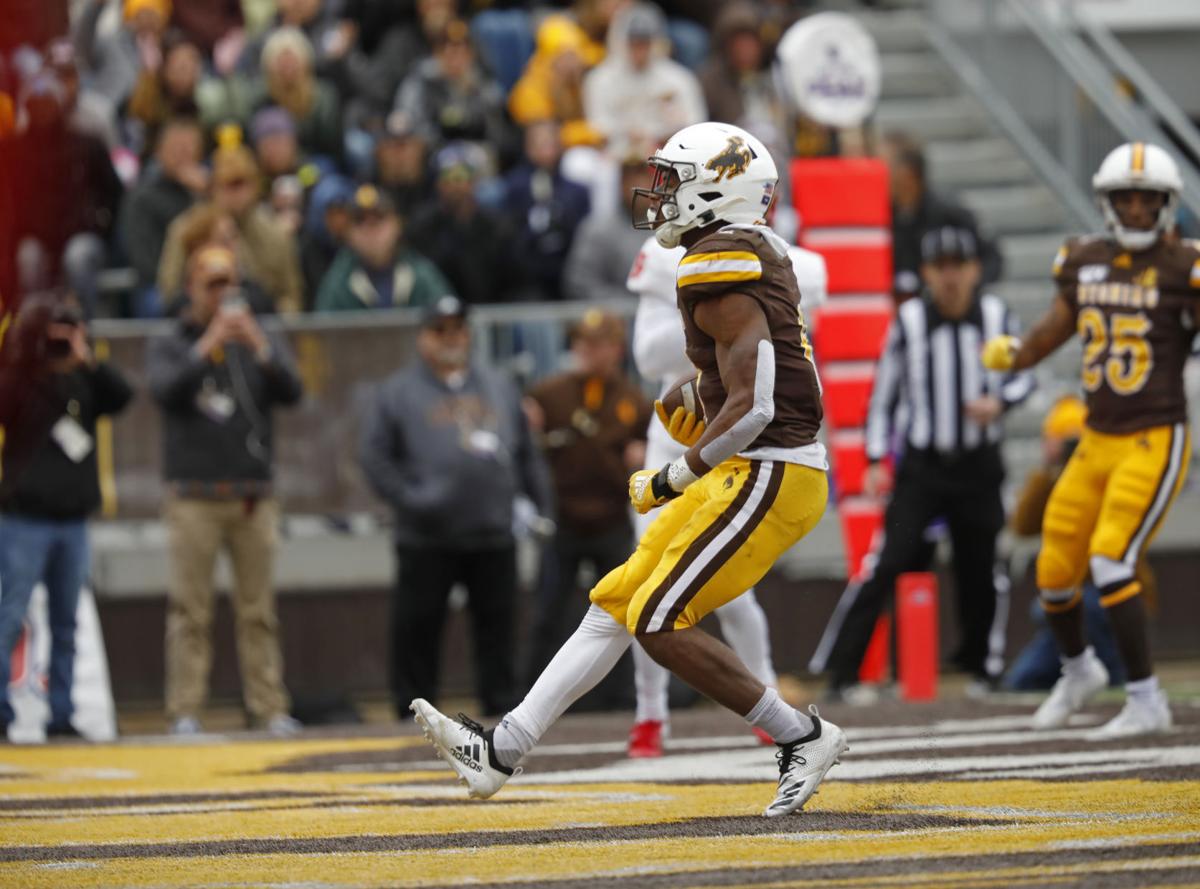 Wyoming's Xazavian Valladay breaks into the end zone for a touchdown against New Mexico on Oct. 19, 2019 at War Memorial Stadium in Laramie. Valladay is coming off a 1,265-yard season -- tops in the Mountain West. 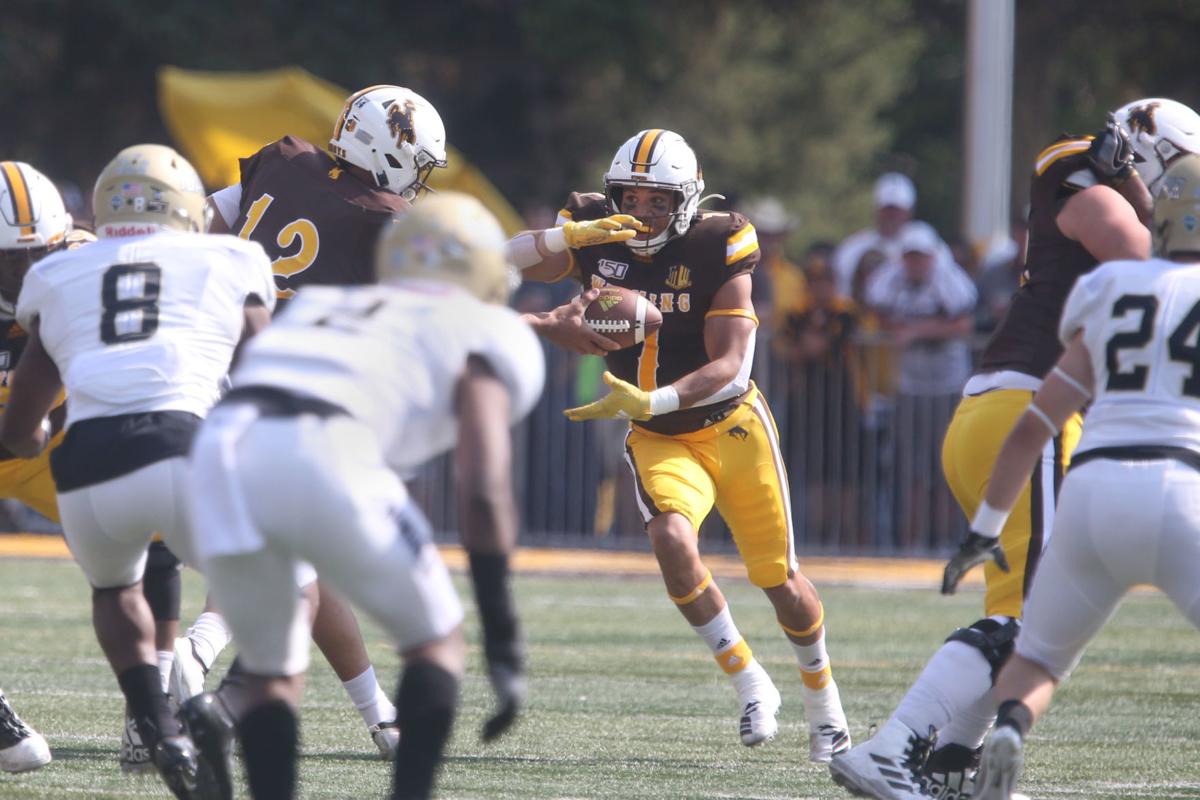 Wyoming running back Trey Smith (7) takes a handoff in the first quarter against Idaho on Sept. 14, 2019, at War Memorial Stadium in Laramie. Smith will be back this spring after receiving a sixth year of eligibility. 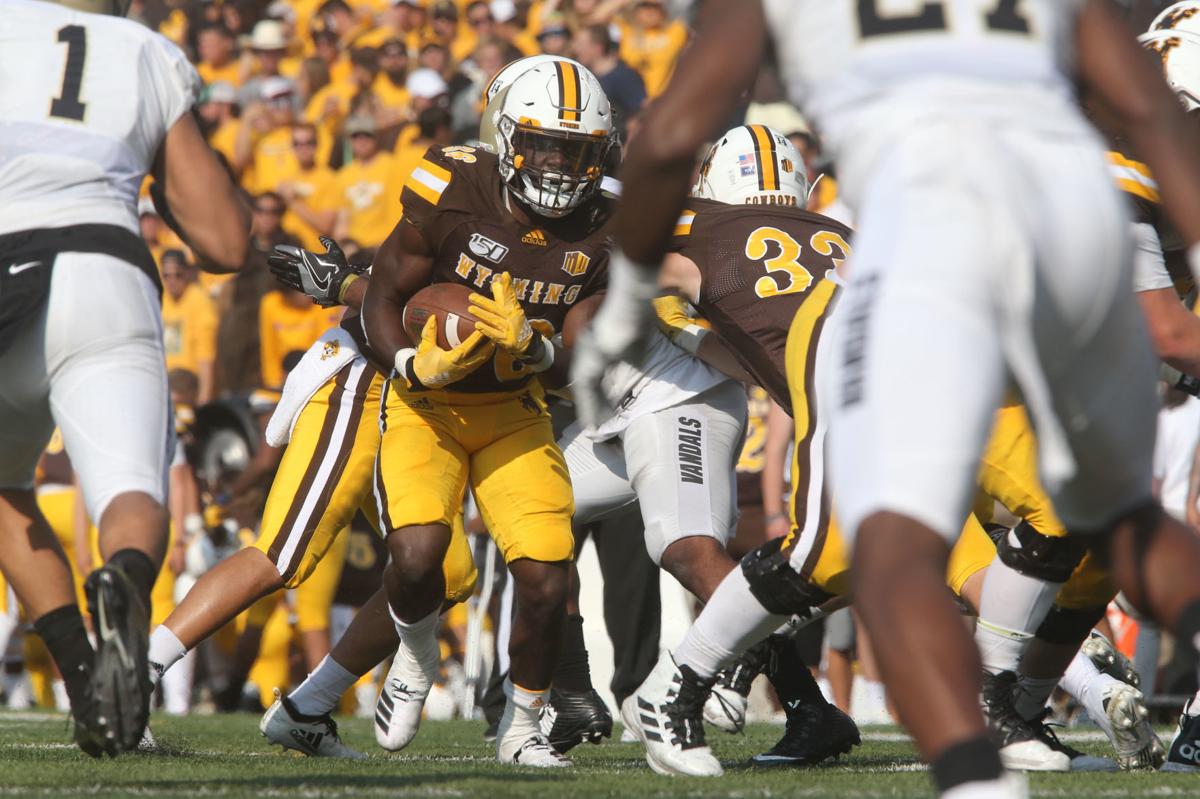 Wyoming running back Titus Swen runs for yardage in the Cowboys' game against Idaho on Sept. 14, 2019, at War Memorial Stadium in Laramie.

After rushing for 396 yards as a reserve his redshirt freshman season, Valladay emerged as the workhorse for the nation’s 23rd-ranked rushing attack this past season, finishing as the Mountain West’s leading rusher with 1,265 yards.

Valladay did his best work late in the season when there weren’t many other options available. The Cowboys’ depth at running back took a hit with injuries midway through the season, but Valladay hit the 100-yard mark in six of UW’s last seven games. The 6-foot, 196-pounder, who was just as much of a pass-catching threat out of the backfield with two games in which he surpassed 250 all-purpose yards, averaged 5.1 yards per carry, scored eight touchdowns and enters his junior season as the Cowboys’ unquestioned No. 1 option at the position.

But he’s far from the only one.

UW enters the spring with the kind of depth and experience that rivals any backfield in the MW. With Trey Smith and Titus Swen back in the fold, the Cowboys return their top three running backs from last season.

Smith is back for his second season with the Cowboys and sixth overall in college. The Louisville transfer injured his ankle just four games into his inaugural season with UW and has been granted a sixth year of eligibility by the NCAA, UW coach Craig Bohl said. One of the bigger backs on the roster at 6-0 and 220 pounds, Smith averaged 5.2 yards on his 44 carries a season ago and scored three touchdowns, including a season-long 80-yarder against Idaho.

Swen was a part of the backfield rotation immediately as a true freshman and moved into the backup role until he went down with a season-ending knee injury in mid-October. Swen ran for 349 yards, including a 59-yard touchdown, before the injury. His 5.2 yards per carry match Smith for the most among UW’s returning backs

Smith and Swen return for spring, but two freshmen are available to provide depth. Dawaiian McNeely and Alphonzo Andrews Jr. both redshirted last season after signing with the Cowboys as part of their 2019 recruiting class. McNeely gives UW a bigger body at the position at 6-2 and nearly 210 pounds while Andrews, who played in one game last season, is on the smaller side at 5-10 and 180 pounds, so the pair bring contrasting styles to the position.

There’s even some experience among the walk-ons. Casper native Brett Brenton is back after averaging 5.9 yards on his 29 carries a season ago. So is Yoder native Jeff Burroughs, who’s played in 19 career games entering his redshirt senior season.

True freshman Titus Swen emerging as Wyoming's No. 3 running back

The group also has its lead blocker back in senior Skyler Miller. The Torrington native made the move from linebacker to fullback before last season and enters his second season as the starter there after playing in all 13 games as a junior.

As UW found out last season, the numbers can be decimated by injuries in a hurry. And the Cowboys will need at least two or three healthy running backs given how much their pro-style offense relies on the running game (top 50 nationally in attempts the last two seasons).

But UW has plenty of options. Another one, three-star signee Joey Braasch, will arrive in the summer to add a sixth scholarship back to the mix.

This is the second in a 10-part series previewing each position for Wyoming heading into spring practice, which has not yet been canceled in response to the coronavirus pandemic. UW has suspended all athletic competitions until further notice.

A UW spokesman told the Star-Tribune on Friday the football team is still hoping to hold practice at some point, but a decision hasn't yet been made.

STRONG IN NUMBERS: UW will have five scholarship running backs going through the spring, including Trey Smith (ankle) and Titus Swen (knee), who are coming back from injuries.

Wyoming's Logan Harris should be ‘fine,’ but RB Trey Smith will miss 6-8 weeks

LARAMIE — The list of injuries was long for Wyoming coming out of its first loss of the season, but the Cowboys are hopeful it will be shorter…

Wyoming began signing players to its 2020 recruiting class during the early signing period back in December. The Cowboys have added six more r…

Wyoming's Xazavian Valladay breaks into the end zone for a touchdown against New Mexico on Oct. 19, 2019 at War Memorial Stadium in Laramie. Valladay is coming off a 1,265-yard season -- tops in the Mountain West.

Wyoming running back Trey Smith (7) takes a handoff in the first quarter against Idaho on Sept. 14, 2019, at War Memorial Stadium in Laramie. Smith will be back this spring after receiving a sixth year of eligibility.

Wyoming running back Titus Swen runs for yardage in the Cowboys' game against Idaho on Sept. 14, 2019, at War Memorial Stadium in Laramie.