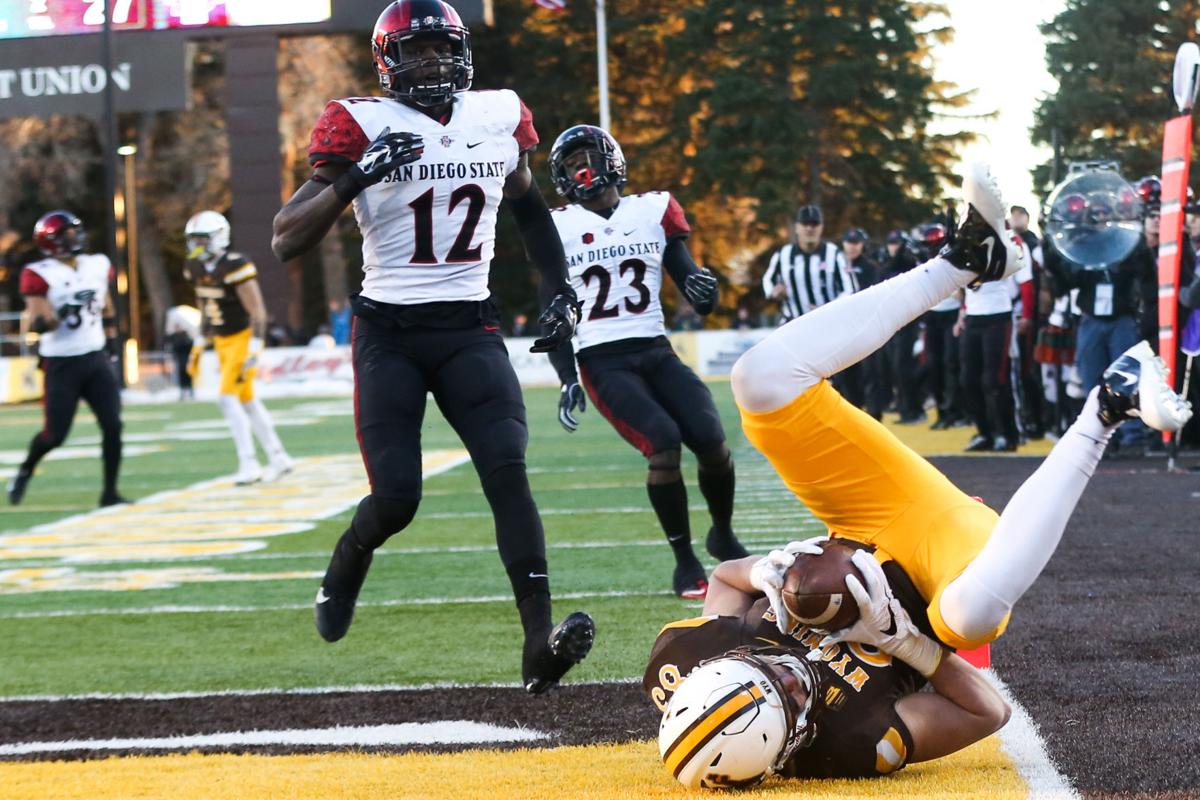 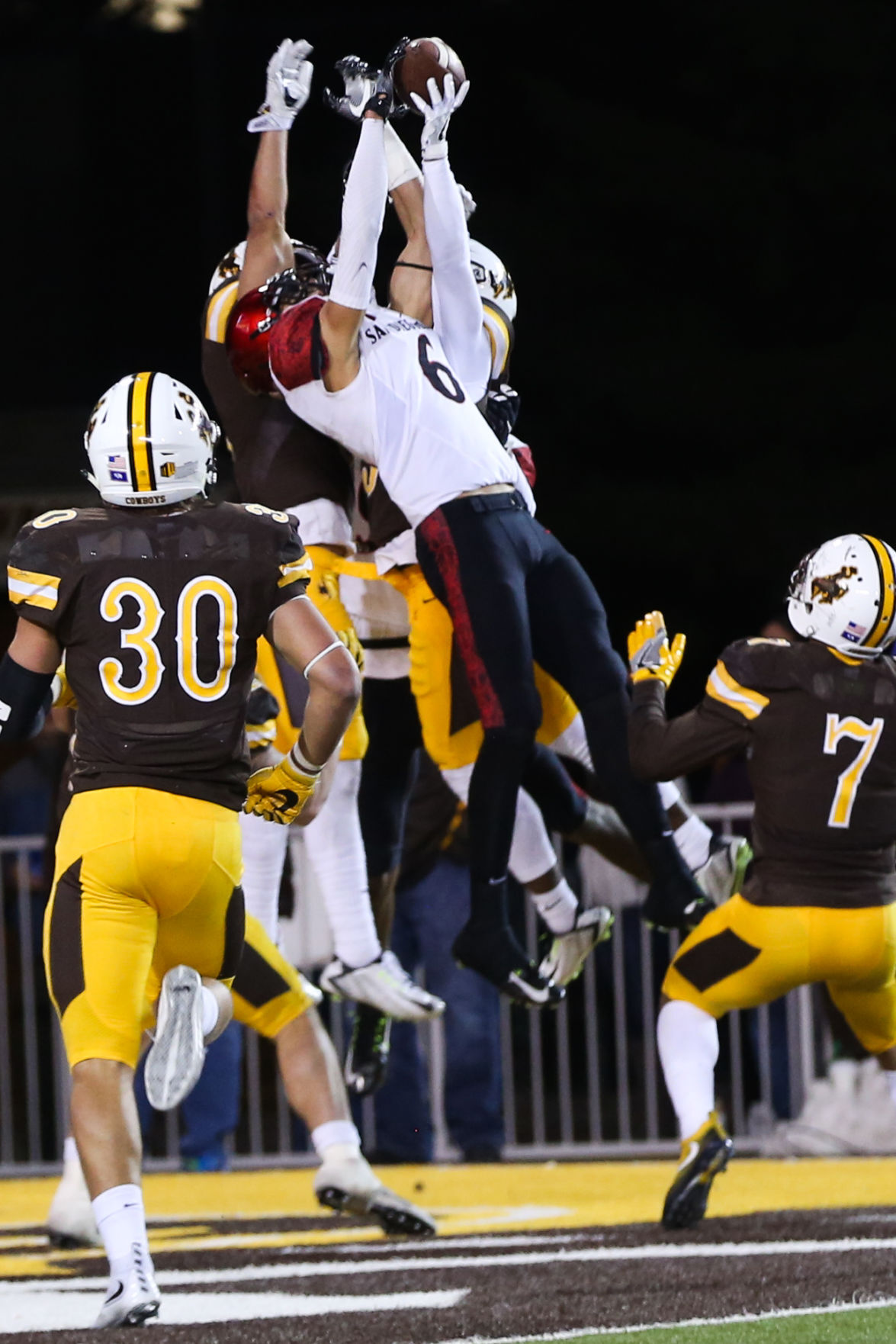 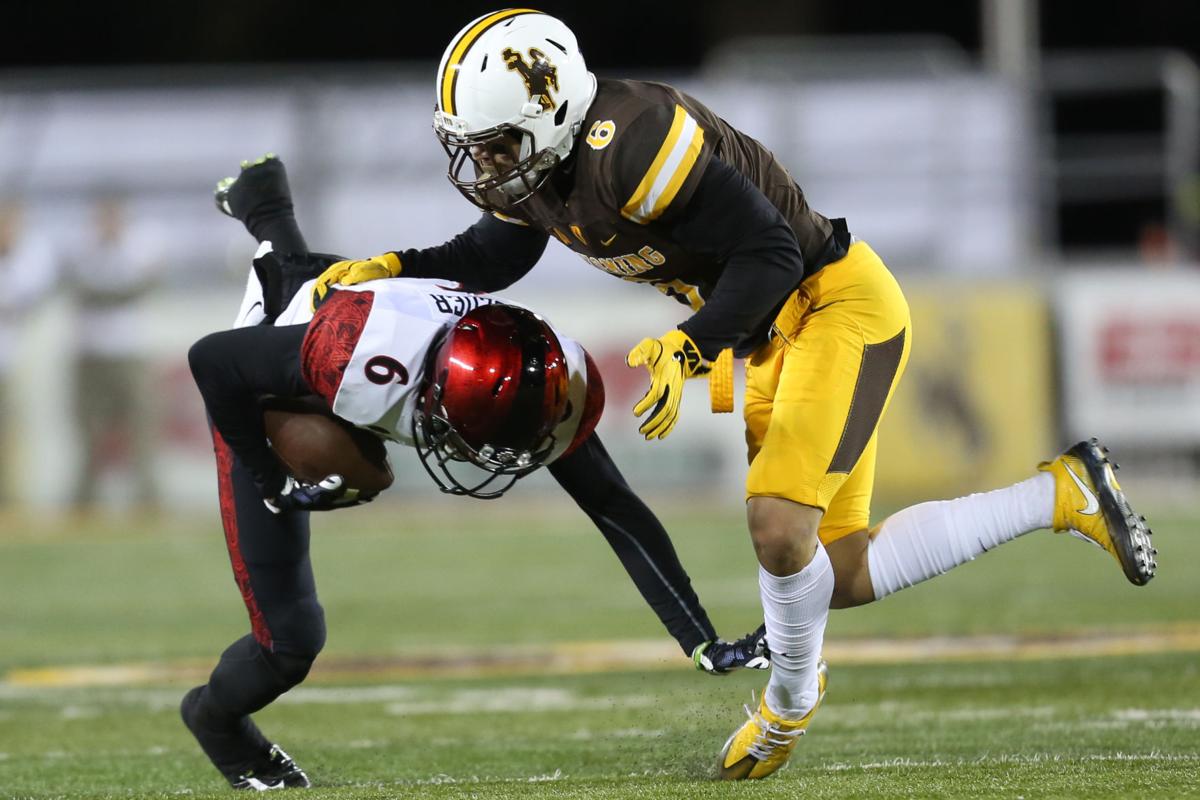 San Diego State's Mikah Holder (6) is tripped up on the play by Wyoming's Marcus Epps (6) in the second quarter on Saturday, Dec. 3, 2016, at War Memorial Stadium in Laramie.

Coming off a triple-overtime loss to UNLV, the Cowboys entered their final stretch of the 2016 season tied atop the Mountain West’s Mountain Division standings with Boise State, which UW had upset a few weeks earlier at War Memorial Stadium. The Cowboys needed to do the same to No. 24 San Diego State in late November to keep pace.

The back-and-forth contest featured a little bit of everything, including last-play dramatics, but a 34-33 win ultimately got UW to a place it had never been since joining the Mountain West in 1999.

“It came down to a play,” UW coach Craig Bohl said afterward. “And it was a big play, but there were a lot of big plays in this ballgame.”

Between Juwan Washington, Rashaad Penny and Donnel Pumphrey, the nation’s leading rusher, SDSU came in with one of the nation’s most potent rushing attacks. Yet that’s not where the group hurt UW the most.

UW bottled Pumphrey up to the tune of just 76 yards on 17 carries, but Penny and Washington each returned a kickoff for a touchdown. Penny’s 93-yard return on the opening kickoff immediately gave the Aztecs momentum.

But the teams traded punches from there, fitting for a heavyweight fight between division leaders.

Brian Hill capped a seven-play, 80-yard scoring drive for UW with an 11-yard run to tie the game at 10 late in the second quarter. But SDSU quarterback Christian Chapman connected with Parker Houston from 3 yards out on the final play of the quarter to put the Aztecs up 17-10 at the break.

The Cowboys milked most of the remaining time off the clock on their next possession with a 15-play, 85-yard scoring drive capped by Allen’s 29-yard toss to C.J. Johnson that gave UW its first lead at 34-27. To answer, SDSU needed to cover 99 yards in the final 1:07.

The Aztecs spent most of that time driving to UW’s 23-yard line, and with 1 tick remaining, Chapman heaved a jump ball to the end zone, which looked as if it was deflected to the ground.

Officials ruled the pass incomplete, igniting an on-field celebration by fans that proved to be premature. After a lengthy video review, the call was overturned after it was determined Quest Truxton actually caught the ball before it was knocked out of his hands, leaving the Aztecs an extra point away from forcing overtime.

SDSU, however, elected to go for a two-point conversion and the win, but Chapman’s pass was knocked away by cornerback Antonio Hull at the goal line, sending UW fans rushing from the stands onto the field officially this time. Not only had the Cowboys snapped the nation’s longest active conference winning streak — the Aztecs had won 17 straight Mountain West games coming in — but they’d also beaten two ranked teams in the same season for the first time since 1999.

UW lost at New Mexico the following week, but Boise State had already been upset by Air Force. So, more importantly, the win over SDSU kept the division tiebreaker intact for UW and sent the Cowboys to their first-ever Mountain West championship game.

“We want to see San Diego State on Dec. 3 here,” Johnson said, referencing a potential rematch with the Aztecs in the conference title game that UW ultimately got.

20 for 20: Wyoming's most memorable football games of the century

Sophomore signal caller carted off the field after Cowboys' third play from scrimmage.

Three things we learned from Wyoming's overtime loss at Nevada.

Redshirt freshman steps into starting role as Cowboys await official word on whether or not Sean Chambers will need surgery on fractured leg.

Sophomore signal caller carted off the field after Cowboys' third play from scrimmage.

Everything to get you ready for Wyoming's game at Nevada

Miss any of the Star-Tribune's preview content leading up to the Cowboys' season opener? Find it all in one place here.

Wroblewski is the Cowboys' eighth verbal pledge for the 2021 recruiting cycle.

'Kind of a no one before I came in', freshman John Hoyland remains UW's starting kicker

Walk-on was a perfect 6-for-6 in his collegiate debut en route to Mountain West Special Teams Player of the Week honors.

After an extended wait, Wyoming starts unique season with a unique trip to Nevada

Matchup of teams with Mountain West title aspirations will play out in front of a largely empty Mackay Stadium on Saturday.

San Diego State's Mikah Holder (6) is tripped up on the play by Wyoming's Marcus Epps (6) in the second quarter on Saturday, Dec. 3, 2016, at War Memorial Stadium in Laramie.