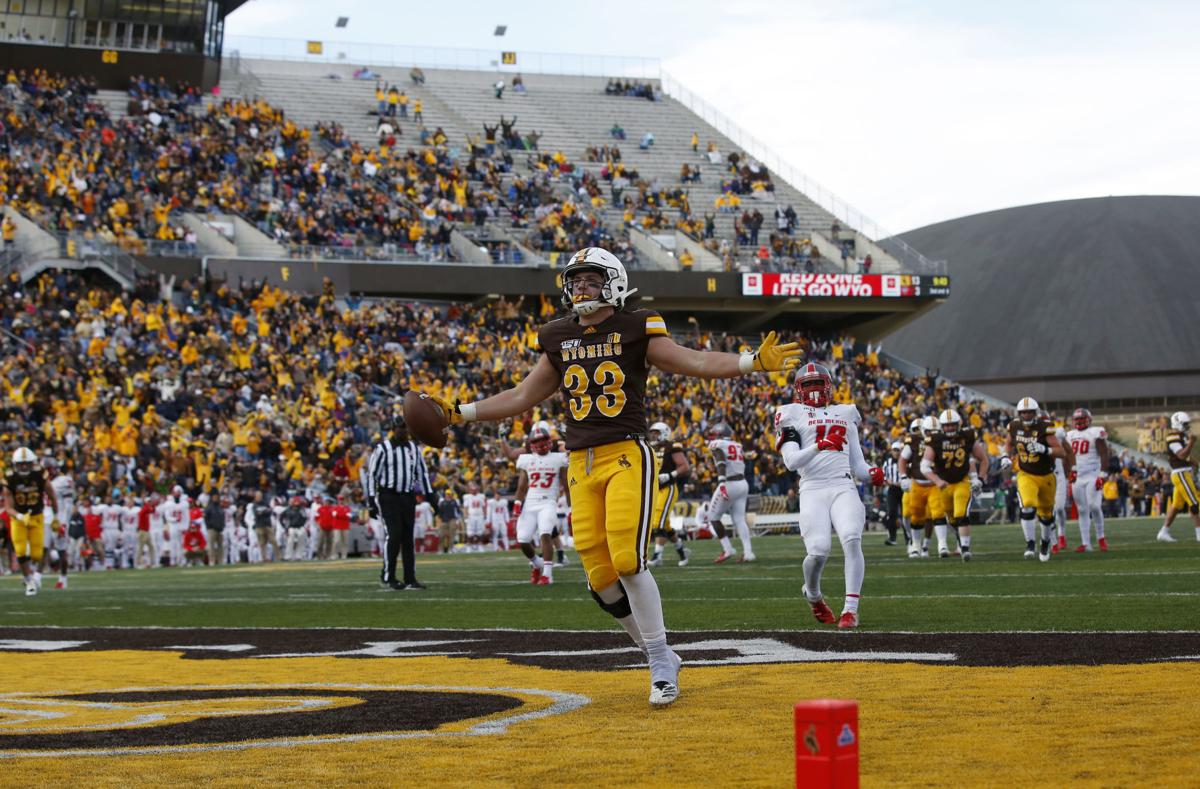 Wyoming tight end and Casper native Josh Harshman steps into the end zone for a touchdown reception during the Cowboys' Oct. 19 victory over New Mexico at War Memorial Stadium in Laramie. UW will receive roughly $630,000 to fund its Arizona Bowl appearance, but will still lose money on travel and expenses. 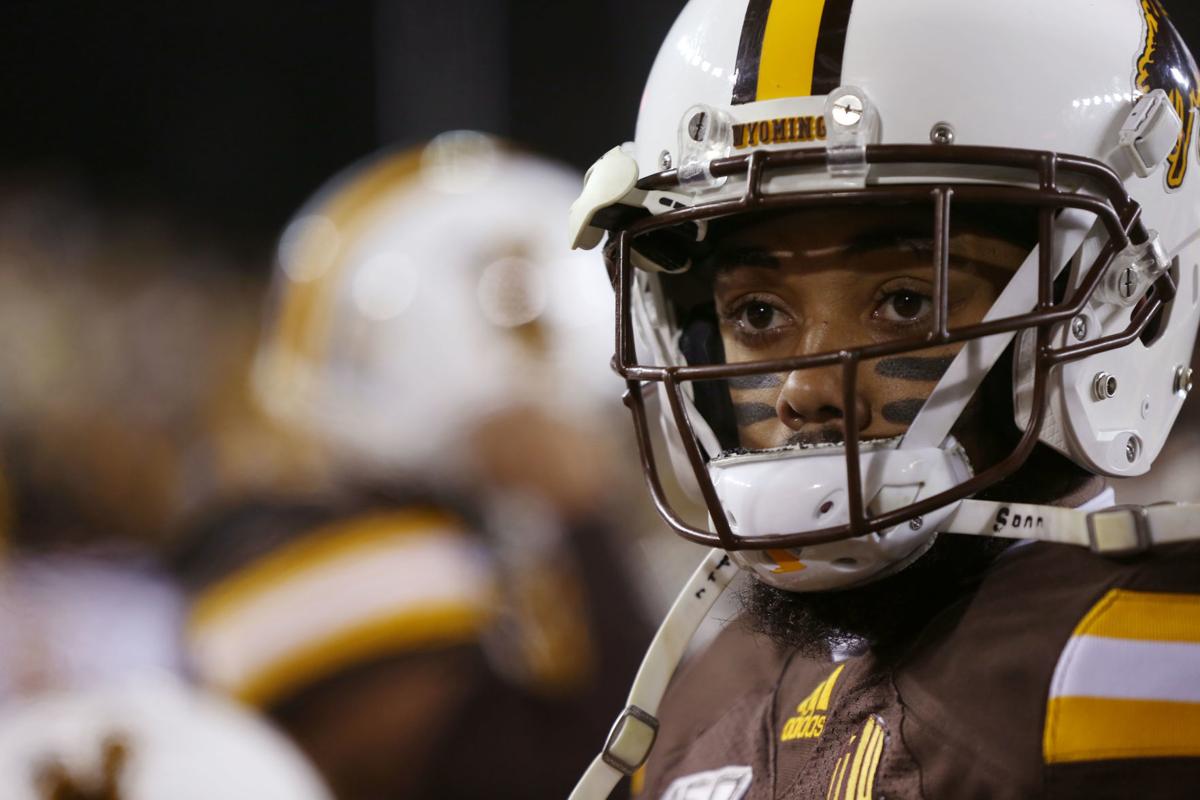 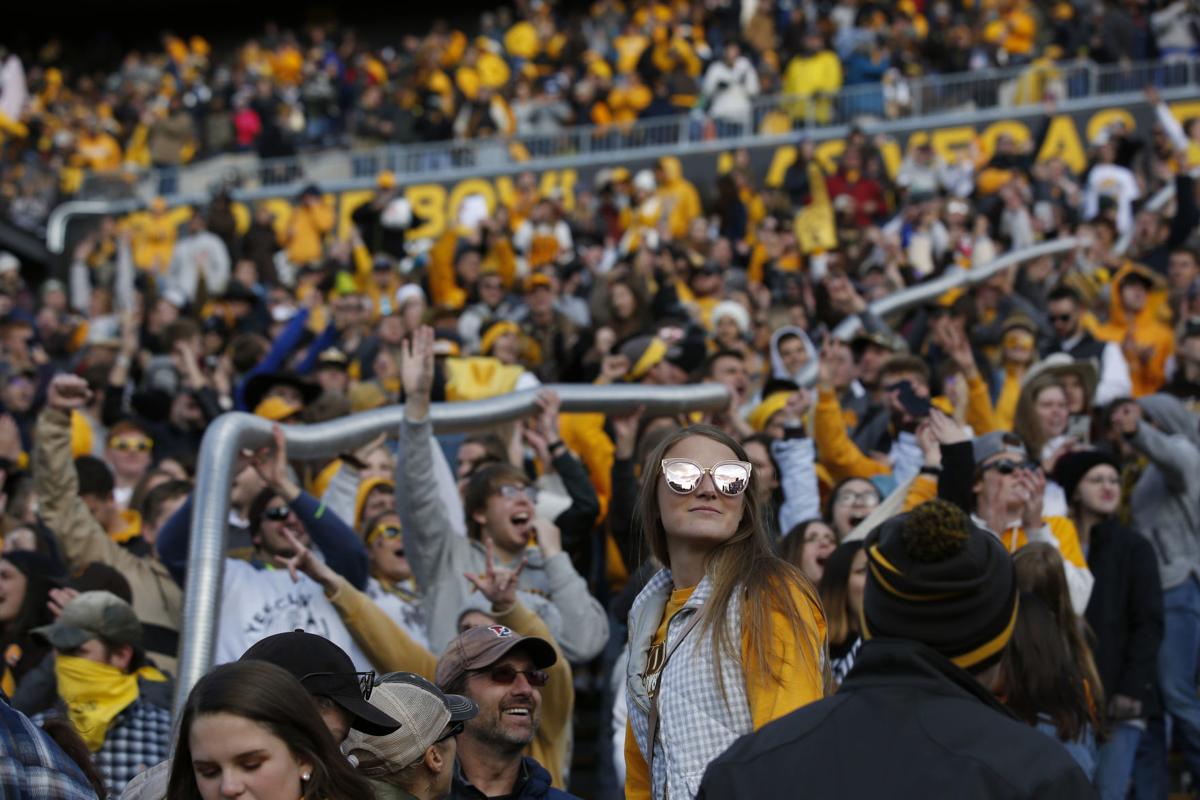 Wyoming fans cheer from the student section during the Cowboys' Oct. 19 homecoming win over New Mexico. UW has sold out of its ticket allotment for the Arizona Bowl, totaling roughly roughly $196,000.

The Wyoming marching band, cheerleaders and football team parade through tailgating fans into War Memorial Stadium before the Sept. 28 game with UNLV. UW is required to bring the full 158-member marching band for its Arizona Bowl appearance, plus the complete cheerleading squad.

LARAMIE — For the third time in four years, Wyoming is part of the postseason. That means the Cowboys are in line for a sum of money just like the other 77 teams playing in a bowl game this year.

But not all of those sums are equal.

Bowl games will pay out hundreds of millions of dollars once it’s all said and done. Typically, the more prestigious the bowl game — the individual payouts from the College Football Playoff semifinals and the rest of the New Year’s Six bowls are in the millions — the better the pay.

Those kinds of games give participating teams, which are almost always from a Power Five conference, a real chance to make a profit once expenses are paid. That’s not the case for Wyoming, which will meet Georgia State in the Arizona Bowl in a New Year’s Eve matchup pitting two Group of Five foes against each other.

The harsh reality is the game will leave the Cowboys in the red.

“Unless you’re going to one of the major bowls — basically a New Year’s Six bowl — most of the rest are not that financially lucrative,” said Bill Sparks, Wyoming’s senior associate athletic director for business operations. “In fact, most of the time, you lose money on them. You just do.”

Just because teams are selected to play in a certain bowl doesn’t mean the payout goes directly to those schools. Instead, bowl guarantees are paid to the conferences, which then share that money among their member institutions. For teams participating in a bowl, that means a certain amount of funds determined by the conference based on distance and other factors to be used as a travel subsidy.

Wyoming is getting approximately $529,600 from the Mountain West to help cover bowl expenses. The school also gets to add the $100,000 minimum it had to sell in tickets to that number, so Wyoming’s total bowl travel subsidy is right at $630,000, athletic director Tom Burman said.

But Sparks said the athletic department is projecting to be close to $70,000 over budget.

“You try to minimize it and try to hold it down as much as you can, but there are some requirements that really kick in,” said Sparks, who added that projection is based on how many people the school is paying for to get to the bowl site and for how long.

During the regular season, teams take a smaller travel squad for road games, but that’s not the case for bowl games. Every eligible player makes the trip. Wyoming is also required by the Arizona Bowl to bring a full 158-member marching band as well as a cheerleading squad and mascot.

The band and cheer squad will bus to the bowl site in Tucson, Arizona, while players, coaches, trainers, equipment managers and other team personnel will use a charter flight and another 30-passenger jet to travel, Sparks said. It will cost roughly $100,000 to fund the band’s transportation, meals and lodging and approximately $175,000 for the flights. The team’s hotel stay will also run in the hundreds of thousands of dollars, Sparks said.

The school will provide players and coaches with a certain number of game tickets for immediate family members just like it does for regular-season games, but it also has to pay for all the seats band members will occupy during the game. Wyoming is on the hook for approximately $36,000 in tickets, though Sparks said the school could possibly sell any tickets that go unused back to the bowl.

“But that’s typically not the case,” Sparks said. “Most of the time, the people show up for those.”

Sparks said the school will also pay for 63 student-athletes to fly out of Tucson back home for the rest of the holiday break once the game is over. All of those one-way plane tickets will roughly cost an additional $38,000, but Sparks sees it almost as breaking even since that will free up enough seats for Wyoming to use just one plane getting everyone else back to Laramie.

Whereas most road trips during the regular season consist of leaving the day before the game and traveling back immediately after, the team will be in Arizona for nearly a week in order to get a few on-site practices in and take part in certain bowl-related events.

Players and coaches reported to the bowl site Friday, meaning more nights spent in a hotel and more meals to fund than usual. In order to keep those costs down as much as possible, they’re the only ones who arrived in Tucson that early.

“We’ve got a number of people that are going to fly commercially and not come down until later so we’re not incurring hotel and meal expenses until they get there,” Sparks said. “And we’ve got some, quite honestly, that just aren’t going. We just have to make decisions that unless they have an essential business function, then we can’t take them along.

Wyoming sold out its ticket allotment for the bowl game, which totaled roughly $196,000. But instead of what was sold in excess of that $100,000 minimum going directly to the school, roughly half of it goes to the bowl game while the rest goes back into the pool to be divided among conference members, Sparks said.

Last year, Wyoming got a cut of more than $8,000 as a result of Boise State overselling for the First Responder Bowl. The school will have to wait and see if it gets anything back this year.

Whatever Wyoming ends up spending over budget, it will be covered by self-generated funds. That could mean donations from the Cowboy Joe Club, matching funds from the state, money from ticket sales, student fees or any other source of revenue that doesn’t come from the university.

“We don’t pay any of this out of the money the university gives us,” Sparks said. “The university only provides us money for scholarships and salaries.”

For some schools, going bowling comes at a price.

SEEING RED: Wyoming has roughly $630,000 from bowl payouts and ticket sales to cover travel expenses for the Arizona Bowl. The school is projecting to be roughly $70,000 over budget.

MAKING UP THE DIFFERENCE: Anything the school spends over budget will be covered by self-generated funds, not university dollars.

HE SAID IT: "Unless you’re going to one of the major bowls -- basically a New Year’s Six bowl -- most of the rest are not that financially lucrative." -- Bill Sparks, UW senior associate AD for business operations.

Huskies replace Clemson on UW's non-conference slate for that season.

With both starting linebackers drafted, what's next for Wyoming at the position?

Chad Muma will take over at MLB, but there's far more uncertainty on the outside.

Wyoming tight end and Casper native Josh Harshman steps into the end zone for a touchdown reception during the Cowboys' Oct. 19 victory over New Mexico at War Memorial Stadium in Laramie. UW will receive roughly $630,000 to fund its Arizona Bowl appearance, but will still lose money on travel and expenses.

Wyoming fans cheer from the student section during the Cowboys' Oct. 19 homecoming win over New Mexico. UW has sold out of its ticket allotment for the Arizona Bowl, totaling roughly roughly $196,000.

The Wyoming marching band, cheerleaders and football team parade through tailgating fans into War Memorial Stadium before the Sept. 28 game with UNLV. UW is required to bring the full 158-member marching band for its Arizona Bowl appearance, plus the complete cheerleading squad.