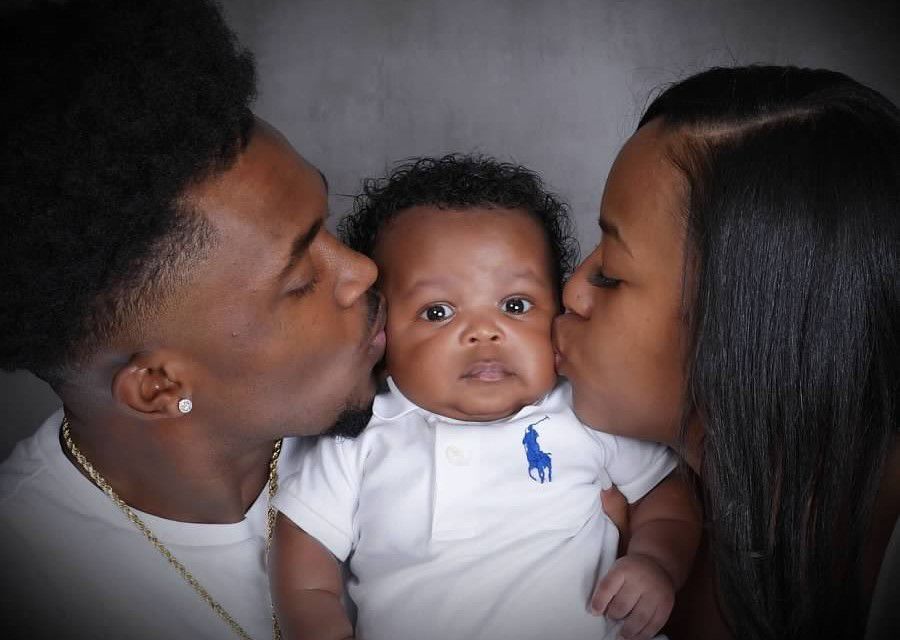 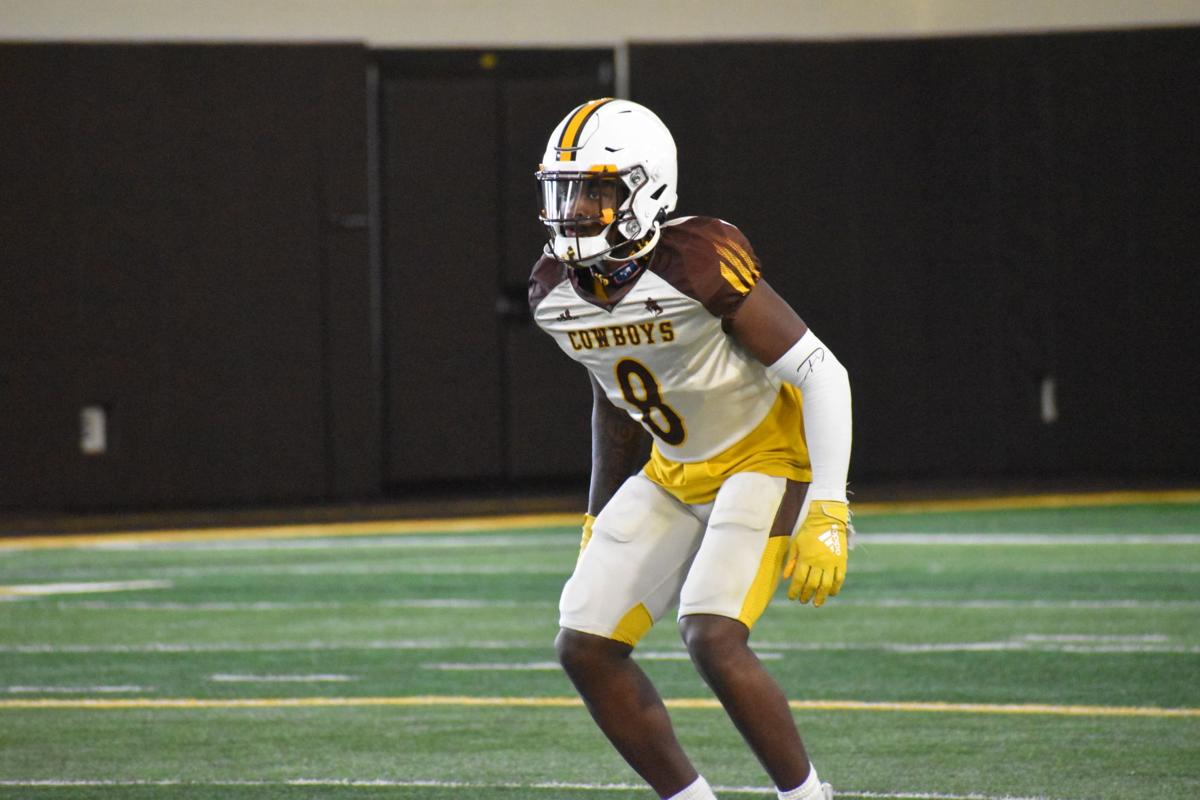 Wyoming safety Rome Weber runs through a drill during practice April 22 at the team's indoor practice facility in Laramie. Weber returned to the team this spring after opting out of the 2020 season.

LARAMIE — Had it been a choice that might have only affected him, Rome Weber would have played football last season.

Nowadays, though, Wyoming’s defensive back has much more to think about than himself.

Weber rejoined the Cowboys’ football program this spring after nearly a year away, and he did so following a major addition to his life. He’s long been a son, student and athlete, but he recently became a father when his first child, Rome Kentrell Weber, was born on Dec. 16.

“That was crazy, man,” Weber said of holding his son for the first time inside Ivinson Memorial Hospital in Laramie. “I was a little scared at first because they’re so small and you don’t want to hurt him or anything. But holding him for the first time, that’s a great experience. That’s something I’ll never forget.”

Naming their newborn was the easy part for Weber and his girlfriend, Kristina Cantrell. They wanted their son’s name to have at least some variation of theirs, so they switched up the spelling on Cantrell’s last name to come up with baby Rome’s middle name. It’s different than his dad’s middle name, so baby Rome isn’t a Junior.

Like all other first-time parents, though, figuring out everything that comes with such a life-altering experience has been a learning process for Weber and Cantrell. One of the biggest changes initially for Weber was getting used to fewer hours of sleep each night, though he said baby Rome sleeps “really good” as a 5-month-old, which has helped his parents’ sleep schedule.

Future Real Bright but It Got War In It. pic.twitter.com/TPpy9Moql3

“When he was first born, I did most of the staying up because my girl was pretty tired and worn out from being in labor,” Weber said. “So I would try to take quick naps when the baby was taking naps, but when he would cry, I would be the one basically getting up to take care of him, feeding him and stuff like that. She would feed him a couple of times if she could, but the doctors really wanted her to rest and get some rest so she could feel better.

“I always say it’s the best experience but the most tiring at the same time. But it’s been great. It’s not really tiring anymore, but when they’re a real newborn, it’s tiring. It’s been great, though. I love it.”

Weber admitted news of Cantrell’s pregnancy came as a surprise last summer. A pregnancy test came back positive, and a visit to the doctor confirmed the result. Weber said those feelings eventually gave way to excitement.

But the pregnancy came amid a pandemic in which the unknowns far outweighed the knowns. Weber was getting ready to prepare for his redshirt sophomore season after starting all but one of UW’s 13 games at free safety in 2019, but since Cantrell and Weber live together, the possibility of contracting COVID-19 and infecting his pregnant girlfriend gave him pause.

Ultimately, Weber decided any health complications that could come from that scenario weren’t worth it.

“I always say if I was out here in Laramie by myself and living by myself, I would’ve still played because I could catch the virus and (there is a) 90% (chance) I would be fine,” Weber said. “But with the virus at the time, it was still kind of new. We didn’t know a lot of things about it. We didn’t know even how adults react to it 100%, so I didn’t know how pregnant women would react to it if she did end up contracting it. So that was really the main part of the decision.”

Like the other five players who opted out of UW’s abbreviated 2020 season, that decision meant Weber wasn’t allowed to practice or access any team facilities during the season. Weber, who hasn’t played a snap since UW’s Arizona Bowl win to cap the 2019 season, didn’t rejoin the team in an official capacity until the Cowboys began winter workouts at the start of the new year, just weeks after his son was born.

As expected, getting reacclimated has been a process.

“If a defensive back misses time, that’s not a position where you go, ‘OK, let’s go. Let’s just plug and play,’” UW defensive coordinator Jay Sawvel said. “From footwork to vision to everything else … there’s been progress. But it takes some time.”

The fundamentals along with the physical part of the game is one part of getting back into the swing of things for Weber after the lengthy layoff. He also spent the spring getting caught up on Sawvel’s defense since he didn’t learn the second-year coordinator’s system last season.

“In terms of knowing the defense as good as I want to and things like that, I wasn’t in any meetings for the whole year. I was out,” Weber said. “So basically I’m coming in and trying to learn a new defense, so that was really the main part. But I’ve really been getting more comfortable. Coach is telling me I’ve improved every week, so that’s a good thing. And now I just think I need to keep improving and keep tweaking the little things.”

On the field, Weber said getting back in game shape is at the top of his to-do list, which is going to take even more time as he tries to reclaim his starting job. UW has yet to release a post-spring depth chart, but senior Braden Smith, who started all six games in Weber’s absence last fall, is expected to be listed ahead of Weber when that happens after UW coach Craig Bohl said late in the spring Smith had started to separate himself in that competition.

“I haven’t played football in over a year” Weber said. “It’s been a while, but it feels good though.”

He’s back with even more motivation.

“It’s like every day I get to take care of (my son), it’s like I’m falling in love with him more every day basically,” Weber said.

FAMILY MAN: Wyoming safety Rome Weber and his girlfriend, Kristina Cantrell, welcomed their first child into the world on Dec. 16.

BACK IN ACTION: Weber returned to the team this spring after opting out of last season because of health-related concerns for his family amid the coronavirus pandemic.

Unit still finished last season in the top 45 nationally in points and yards allowed despite mass attrition, but the Cowboys want more in Year 2 under coordinator Jay Sawvel.

Wyoming safety Rome Weber runs through a drill during practice April 22 at the team's indoor practice facility in Laramie. Weber returned to the team this spring after opting out of the 2020 season.