LARAMIE — Sean Chambers is back in the same spot he’s been for most of the last three seasons when healthy.

Chambers is officially Wyoming’s starting quarterback heading into fall camp. UW released its post-spring depth chart Wednesday, and Chambers was listed ahead of his primary competition for the job, freshman Levi Williams.

Chambers and Williams were in what UW coach Craig Bohl called a neck-and-neck battle for the starting spot all spring, but the prevailing thought was Chambers always had the edge considering the 6-foot-3, 225-pound sophomore has been the leader of the Cowboys’ offense since the end of the 2018 season when he’s been on the field.

Chambers has accounted for 2,081 yards and 22 touchdowns in 13 career games for the Cowboys, leading UW to a 9-3 record in his 12 starts. Twelve of those touchdowns have come on the ground for the dual-threat signal caller, whose physical running style combined with some bad luck have cut each of his last three seasons short.

Chambers returned this spring with a clean bill of health after his latest season-ending injury came just three snaps into the 2020 season, but he wasn’t the only UW quarterback to do so. Williams, who has started six games in Chambers’ absence the last two seasons, banged up his throwing shoulder late last season and also dealt with a hip pointer.

Williams has rushed for eight of his 12 career touchdowns, but both signal callers returned with a clean bill of health this spring looking to do their part in improving the Cowboys’ much-maligned passing game. Working under new offensive coordinator Tim Polasek, the two received mixed reviews from the coaching staff through the spring in regards to their accuracy in the passing game.

“I know Coach P is going to put in the best guy, and that’s all that matters,” Williams said. “He’s going to play the hot hand. If that’s me or that’s (Chambers), it doesn’t really matter. It’s just what’s best for the team. That’s how it’s going to go.”

Bohl again referred to the quarterbacks’ performances in UW’s spring game as a mixed bag, wanting better efficiency from both quarterbacks in the short passing game while also praising the kind of explosiveness through the air that’s been sorely lacking from the Cowboys in recent seasons. Chambers and Williams combined for three of the four touchdowns thrown in the game, averaging 27 yards on those scoring tosses.

They also threw an interception apiece, but the overall numbers were a far cry from what they’ve been for two quarterbacks who’ve combined to complete less than 50% of their passes during their careers. Chambers went 8 of 13 passing for 172 yards while Williams was 10 of 17 for 132 yards. Most of that production came in the first half.

“My play, it was OK (in the spring game),” Chambers said. “There were definitely some throws and some stuff I wish I had back, but I haven’t played much football in the last year. So I’m going to take it with a grain of salt and get back to work.”

The only question now is whether or not Chambers will actually take the first snap for UW three months from now when the Cowboys open their season against Montana State at War Memorial Stadium. Bohl said the plan all along was to name a starter after the spring, but that doesn’t mean things couldn’t change over the course of fall camp.

What Bohl sounded more certain of is that he won’t play two quarterbacks like he planned on doing heading into last season.

“What I’m not going to do is just have musical chairs there,” Bohl said toward the end of UW’s spring. “We’ll take a look and name a starter unless some things really become uneven during fall camp. That does not mean there won’t be an evaluation during the fall, but I don’t think you’re going to see an either/or. I really don’t. However, I can tell you the competition is razor thin. It’s been very, very good.”

The good news for the Cowboys is they have two signal callers with starting experience assuming both stick around in Laramie, which is no guarantee with the NCAA’s implementation of the one-time transfer rule. But the post-spring depth chart made it clear the job is once again Chambers’ to lose. 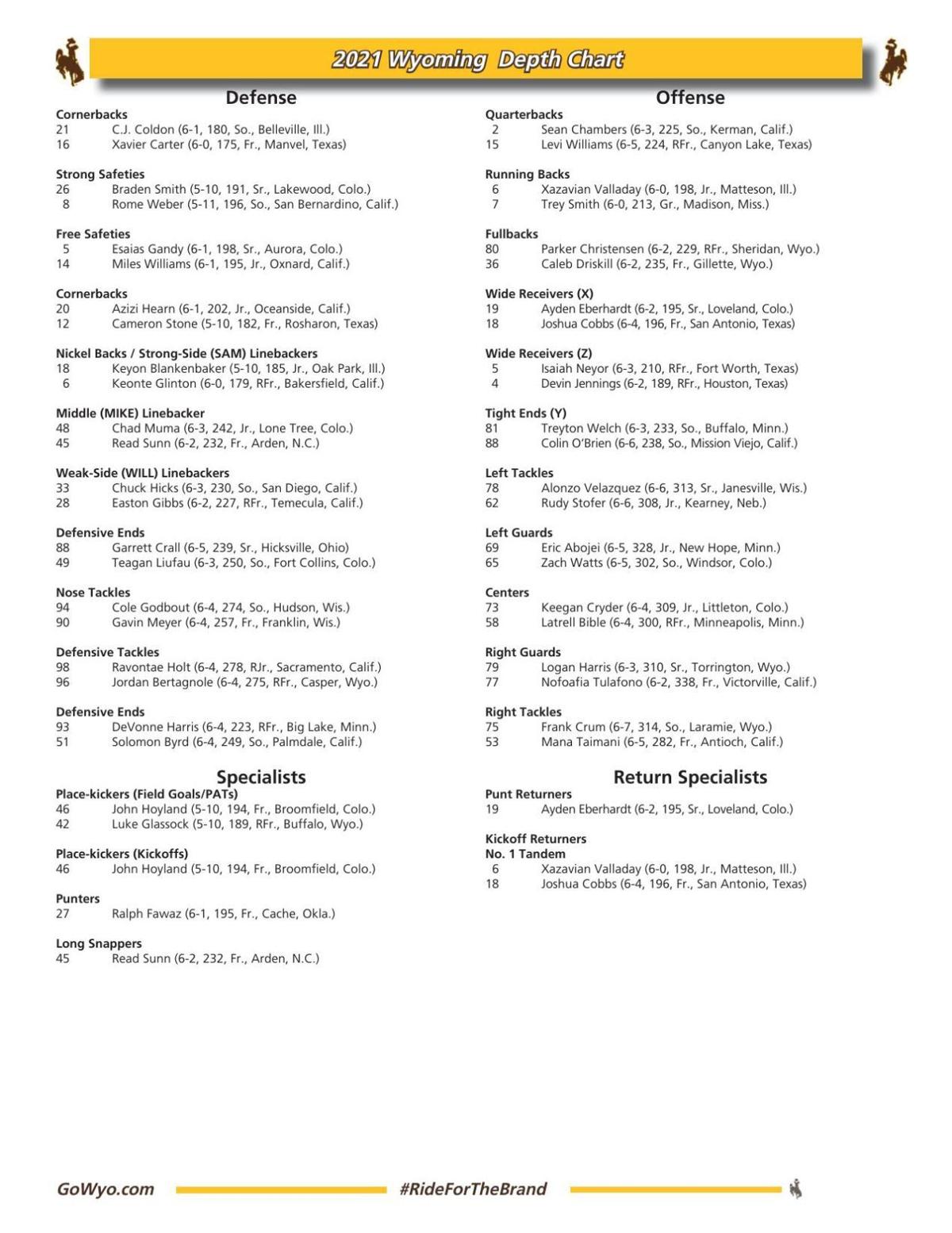 The Cowboys' sophomore quarterback briefly contemplated calling it quits after his third season-ending injury in as many seasons. The only thing he ultimately gave up was his old jersey number.