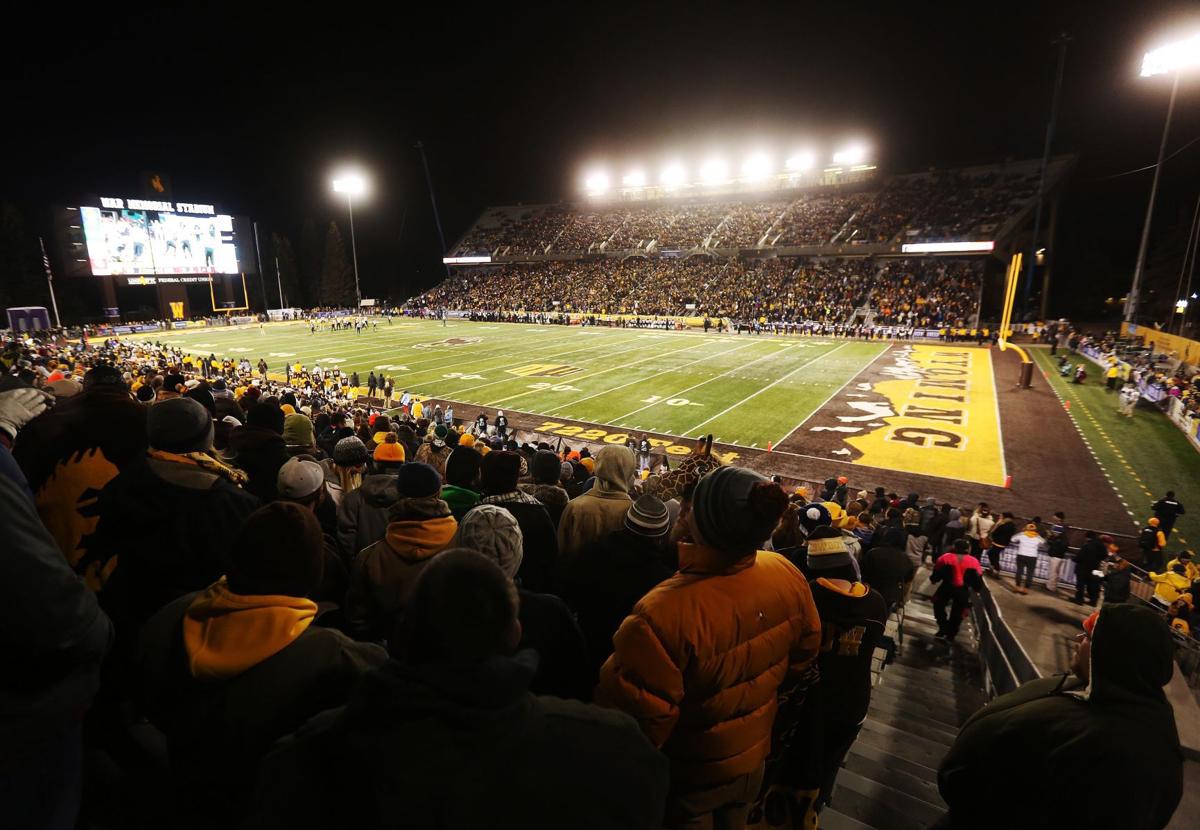 Fans crowd into the University of Wyoming's War Memorial Stadium for the Mountain West Football Championship Game between the Cowboys and San Diego State on Dec. 3, 2016. 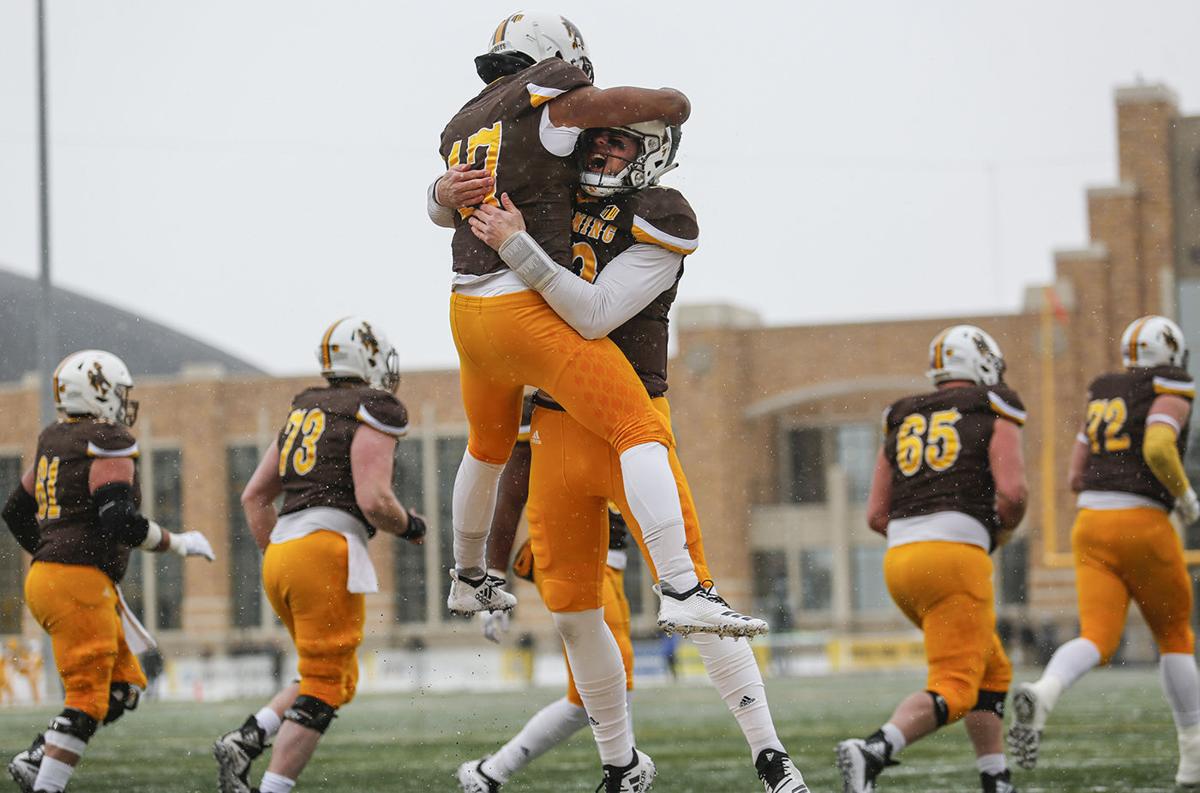 In the only Mountain West title game played at War Memorial Stadium to this point, Wyoming and San Diego State played another instant classic in a rematch of their 2016 regular-season tilt. Josh Allen's three touchdown passes helped the Cowboys rally from a 14-point deficit in the second half to get within a possession, but SDSU held on for a 24-21 win on an otherwise historic day for UW's program.

Wyoming didn’t qualify for a bowl in 2003, but the Cowboys soured a bowl-eligible season for its most bitter rival in comeback fashion. UW rallied from a 21-14 halftime deficit to take a lead in the third quarter, and after Colorado State tied it early in the fourth, Casey Bramlet connected with Malcom Floyd in a driving snowstorm for a 53-yard touchdown pass that proved to be the difference in a 35-28 victory -- UW’s first Border War win at home since 1991.

Wyoming made the trip to Utah State in September of 2001 with heavy hearts after eight UW cross country runners died in a car accident a week earlier. Still, Casey Bramlet threw for 422 yards, and the Cowboys rallied from an 11-point deficit to lead 43-36 before Utah State scored with just 25 seconds left. But the Aggies were penalized for excessive celebration after the play, and their 35-yard extra-point attempt was blocked by Scottie Vines, preserving an emotional 43-42 win for UW.

Wyoming took the lowest-scoring offense in the Football Bowl Subdivision to Knoxville, Tennessee, as a major underdog. By the time UW walked out of Neyland Stadium, the Cowboys had spoiled the Vols’ homecoming. UW’s defense limited Tennessee to a single touchdown, and Ward Dobbs’ 24-yard interception return for a score helped the Cowboys muster just enough points to pull off a 13-7 shocker, which doubled as the Vols’ first-ever loss to a Mountain West team.

Wyoming opened the 2007 season as an underdog against a Virginia team that went on to win nine games and finish the regular season ranked No. 21 in The Associated Press Top 25. But UW’s defense was suffocating, limiting the Cavaliers to 7 rushing yards and 110 total yards. By the time it was over, the largest opening-game crowd in War Memorial Stadium history (31,620) witnessed a 23-3 shellacking of a Power Five opponent.

Ole Miss expected to celebrate a win in Ed Orgeron’s home debut as the Rebels’ coach. Instead, Wyoming sent many of the fans inside Vaught-Hemingway Stadium back to the Grove early. The Cowboys forced four turnovers, scored 24 unanswered points and left SEC country with a 24-14 win -- UW’s second upset of Ole Miss in as many seasons.

Wyoming trailed Air Force by two touchdowns with 8 minutes, 38 seconds left and didn’t have its starting quarterback, but that’s when the Cowboys made their move. Backup Tyler Vander Waal, stepping in for an injured Sean Chambers, led three fourth-quarter scoring drives and put UW ahead with a 22-yard touchdown pass to Austin Conway with 1:09 left. The Cowboys’ defense came up with interceptions on the Falcons’ final two possessions, helping UW hold on for a 35-27 comeback win that seemed improbable just minutes earlier.

Wyoming and UNLV needed three overtimes to decide a winner at Sam Boyd Stadium. Ultimately, J.J. Raterink’s fourth and final touchdown pass -- a 25-yarder to Jovon Bouknight -- lifted the Cowboys to a 53-45 win. The victory also spoiled the final home game in the famed coaching career of UNLV’s John Robinson, who’s since been elected to the College Football Hall of Fame.

In the final Border War ever played at CSU’s Hughes Stadium, Wyoming took control with 21 second-quarter points and cruised to a 38-17 win. Defensive lineman Chase Appleby had a pick-six while quarterback Josh Allen threw for a touchdown and ran for another, but the night belonged to Brian Hill. The Cowboys’ senior running back ran for 166 yards on just 19 carries to surpass Devin Moore as UW’s all-time leading rusher, a designation he still holds today.

Wyoming matched Hawaii blow for blow in a record-setting tussle that saw seven lead changes and overtime before the outcome was decided. UW quarterback Brett Smith threw a school-record seven touchdown passes, and Robert Herron caught four of those, which is still tied for the Mountain West single-game record. Stuart Williams’ 36-yard field goal ultimately lifted the Cowboys to a 59-56 win, but not before UW racked up 793 total yards, which was a Mountain West record at the time.

20 for 20: Wyoming's most memorable football games of the century

True freshman went from walk-on to one of the top placekickers in the Football Bowl Subdivision.

Three-year starter is Cowboys' active leader in tackles and sacks.

Fans crowd into the University of Wyoming's War Memorial Stadium for the Mountain West Football Championship Game between the Cowboys and San Diego State on Dec. 3, 2016.