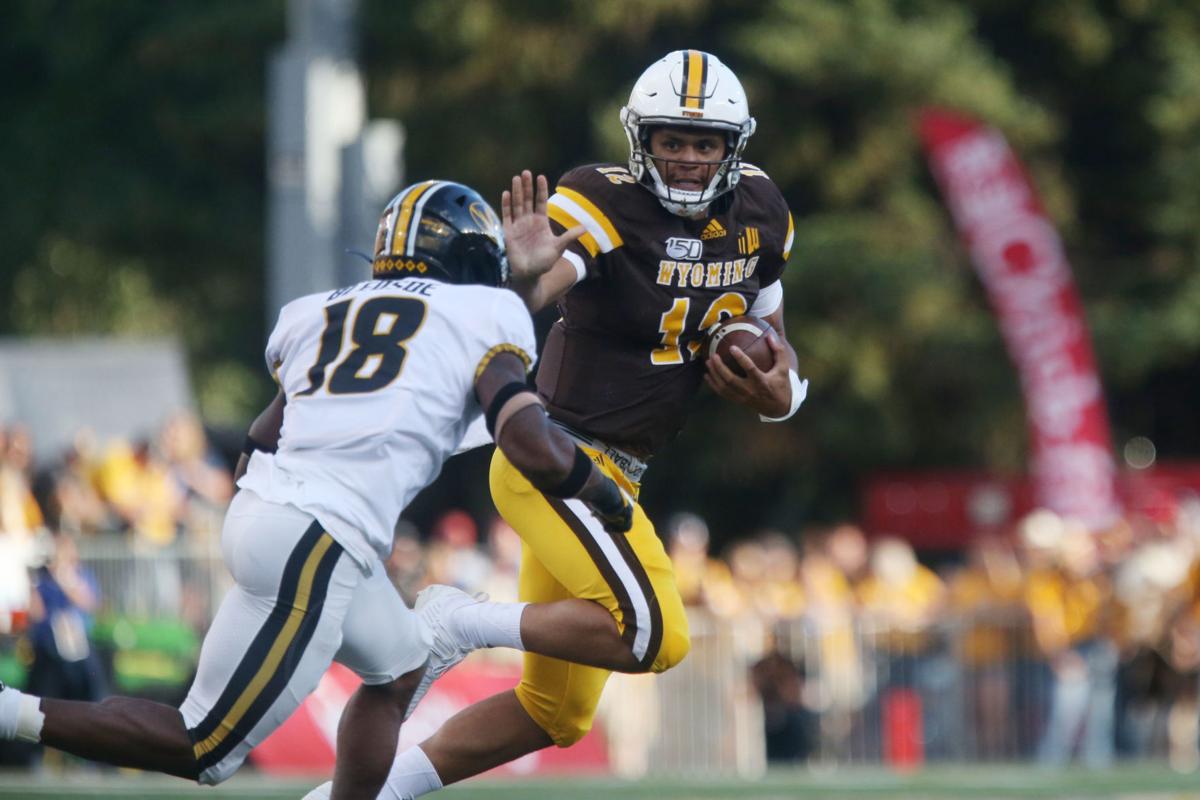 Wyoming quarterback Sean Chambers stiff-arms Missouri safety Josh Bledsoe while running for a touchdown during their game on Aug. 31, 2019, at War Memorial Stadium in Laramie. Chambers is healthy following knee surgery but will have to hold off redshirt freshman Levi Williams to keep the starting job. 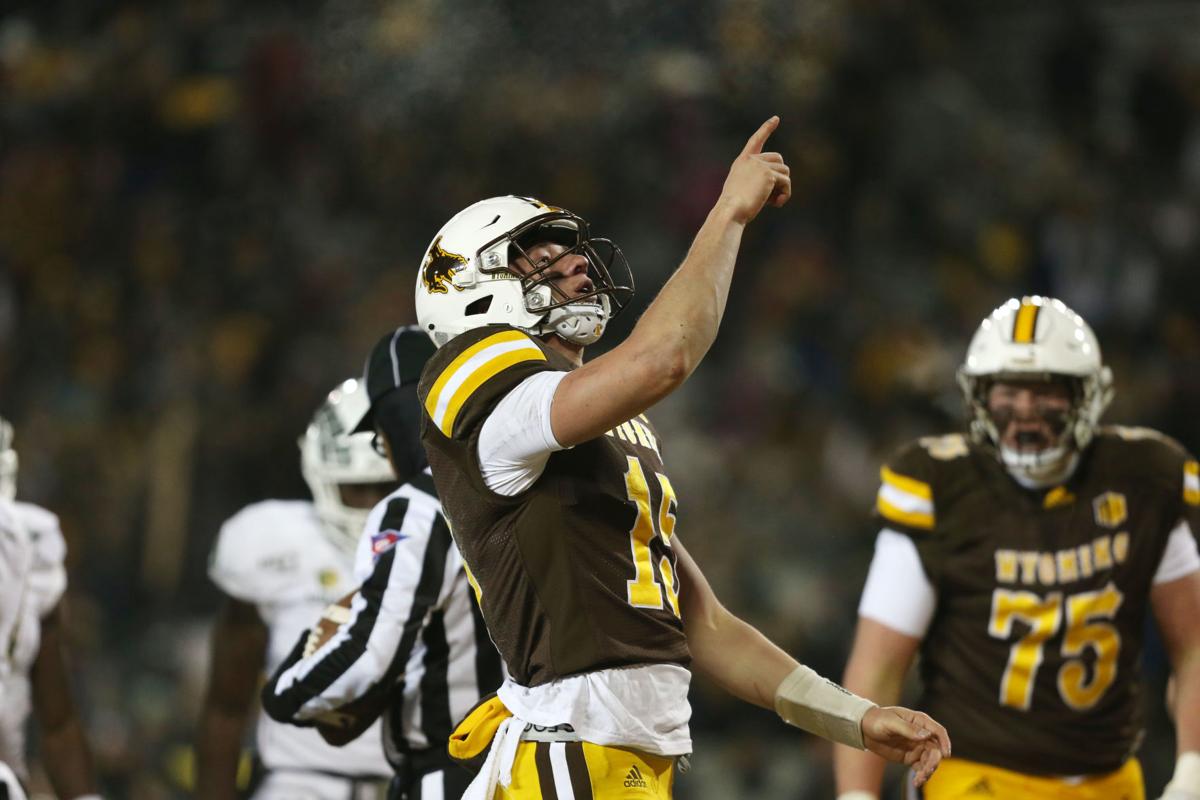 Wyoming quarterback Levi Williams points to the sky after scoring a touchdown against Colorado State in the second half of the Border War on Nov. 22, 2019, at War Memorial Stadium in Laramie. Williams, now a redshirt freshman, came on strong at the end of last season and made his first career start in UW's Arizona Bowl win.

LARAMIE — Sean Chambers and Levi Williams have always known what was coming. What they’re still not sure about is if it will actually happen in the near future.

Since the end of last season, a competition between Wyoming’s quarterbacks for the starting job has been inevitable. UW coach Craig Bohl said as much back in February before the Cowboys started spring football practice, which never happened because of the coronavirus outbreak that brought sports to a halt.

In fact, Bohl was banking on the competition being so close between his young signal callers that he admitted then he was already “kind of leaning toward” playing both of them this coming season.

“Even if I didn’t get hurt and finished the season, I always think there’s going to be competition,” Chambers told the Star-Tribune this week. “I think competition brings the best out of everybody in that situation. I just figured there was going to be a competition regardless, so it’s kind of nothing new.”

But the continued spike in COVID-19 cases nationwide is threatening to keep college sports shut down this fall, so whether that competition actually unfolds in the next month or two is anybody’s guess. Although the Mountain West has yet to make any decisions in regards to football, the pandemic is starting to force the proverbial hand of some conferences at multiple levels now that the scheduled start of the season is less than a month away.

The Ivy League as well as numerous Football Championship Subdivision leagues have already postponed or canceled fall sports while two of the Football Bowl Subdivision’s Power Five conferences — the Pac-12 and Big Ten — have announced they will be playing conference-only football schedules, which has already scrapped Utah from UW’s non-conference slate. The Atlantic Coast Conference is reportedly in favor of doing the same, though the league is exploring a “plus-one” scheduling model that would allow its teams to keep one non-conference game, according to national college football reporter Brett McMurphy.

That’s assuming there’s a season at all this fall, but with decisions still pending, Williams and Chambers both said they’ve made a concerted effort to stay positive with themselves and their teammates about the situation.

“Our strength coaches have really preached to us to prepare like there is going to be a season,” Chambers said. “They say all of the things we’re doing right now will pay off at some point in time, so I really, truly believe that we’re not doing this for nothing. We’re not working out for nothing. I think we’re going to have all of our hard work get paid off whether it’s Sept. 5 or late October.”

For Chambers and Williams specifically, preparing for the season has included getting their bodies and minds ready for a competition that figures to be heated — preparation that began during the shutdown.

Once UW’s spring football practices were called off in March, Williams said he spent a majority of his time back home in Texas. Chambers said he split his time between California, his home state, and Laramie, where he was undergoing rehabilitation on his surgically repaired left knee, which would’ve forced him to miss most if not all of spring drills.

Chambers underwent rehab and treatment almost daily. Some days, he rehabbed twice. Eventually, Chambers, who suffered the injury at the tail end of a touchdown run against Nevada in late October, got to the point where he began to run again on the War Memorial Stadium turf, which was “really helpful to get me back into shape and get my knee healthy, too,” he said.

On April 28 — more than six months after the injury — Chambers announced via social media that he’d been cleared by doctors to return to football-related activities. He said he still takes part in rehab three times a week as a precaution.

“I feel great,” Chambers said. “I think the training staff and the strength staff did a really good job this summer kind of easing me back into stuff. With a summer full of training, I feel really, really good and almost back to where I was last year.”

While Chambers worked on getting his body healthy, Williams was busy transforming his. Williams said he played last season at roughly 210 pounds, but he wanted to pack on some more in order to better handle the physical rigors of playing quarterback in an FBS conference.

Working out was part of the equation, however unconventional it might’ve been during quarantine. Williams said he ran and lifted whatever weights were available to him as often as six days a week. He even posted videos to Twitter of himself pushing a car and pulling a vehicle with a rope.

But Williams also significantly increased his daily calorie intake, eating what he described as a “really big meal” for lunch and dinner with frequent snacks in between. By the beginning of the summer, Williams had added more than 30 pounds to his 6-foot-5 frame.

“I really didn’t change too much of my diet,” Williams said. “I just ate more of my diet. Lots of meat and potatoes.”

In between rehabbing, training and eating, there were throwing sessions and film study, some of which came during virtual position meetings each week with offensive coordinator Brent Vigen, who doubles as UW’s quarterbacks coach. Zoom meetings were held at least twice a week with each one lasting roughly an hour.

“I’m just trying to get my mind right as far as film study and learn the offense we play in,” Williams said.

Once the NCAA approved voluntary summer workouts for football teams, both quarterbacks returned to UW’s campus the first week of June, where, as recently as this week, Williams weighed in at 245 pounds. Both are healthy, and even as the number of COVID-19 cases in Wyoming continues to climb, Williams and Chambers said there was no reluctance on their part to return to campus that early.

“I want to play football,” Chambers said. “I want to be here. I want to be around the guys, so it was an easy decision for me.”

Analysis: Wyoming needs passing game to evolve in order to take next step in the Mountain West

It’s also easy to understand why a competition between the two awaits given the way last season ended.

Chambers started the first eight games while Williams played in three and started one, so both have multiple games worth of experience. Though neither would be older than a sophomore on the field this fall, Chambers, who was inserted into the starting lineup late in his true freshman season, suddenly finds himself taking on the veteran role in the quarterback room having played in 12 career games. UW is 9-2 in his 11 starts.

A 6-3, 225-pound dual-threat signal caller who’s been used almost as much as a runner as a passer so far in his career, Chambers threw for 915 yards and seven touchdowns last season, though efficiency is one facet of Chambers’ game he said he’s emphasized this offseason after completing just 43 percent of his passes. He added 567 yards and 10 scores on the ground in UW’s first eight games before sustaining the injury.

Bohl and Vigen have both maintained that injuries don’t cost their players their spot on the depth chart, so Chambers is heading into the fall with a leg up in that regard. But Williams impressed with the way he performed in Chambers’ absence once he got his shot.

Williams sat and watched for two games behind Tyler Vander Waal, who has since transferred, before making his collegiate debut against Colorado State. Over UW’s final three games, Williams, who will be a redshirt freshman next season, accounted for 524 yards and five touchdowns and completed 49 percent of his passes, though he attempted only 39 of them.

In his first career start, Williams threw for 234 yards and three scores in the Cowboys’ Arizona Bowl win — both season-highs for a UW quarterback — but he didn’t exactly lack mobility either. Williams averaged 60.3 rushing yards in those three games while two of his touchdowns came on the ground.

“(Chambers) is a great guy. He’s a great competitor, he always pushes me, and I always push him,” Williams said. “It’s going to be fun. … I’m excited for the competition.”

It’s that similarity in style that makes it equally as easy to see why separation between the two may be hard to come by. With both quarterbacks having the ability to run, consistency through the air may be the most important factor in deciding who gets the job operating an offense that’s statistically been among the nation’s worst the last two seasons in passing yards (124th in 2018, 123rd last season) and completion percentage (125, 128).

Assuming there’s actually a job to win come this fall.

“Obviously it’s crossed everybody’s mind: Will there be a season? Will there not be a season?” Williams said. “But I think our guys are really focused on what we can control, and that’s just getting better. And if there is a season, we’ll be ready for it. And if there isn’t, we just have more time to get better for our next season whenever it comes around.”

Wyoming coach Craig Bohl on QB situation: 'You could see both of them play' in 2020

Levi Williams and Sean Chambers will likely both see playing time next season.

Wyoming quarterback Sean Chambers stiff-arms Missouri safety Josh Bledsoe while running for a touchdown during their game on Aug. 31, 2019, at War Memorial Stadium in Laramie. Chambers is healthy following knee surgery but will have to hold off redshirt freshman Levi Williams to keep the starting job.

Wyoming quarterback Levi Williams points to the sky after scoring a touchdown against Colorado State in the second half of the Border War on Nov. 22, 2019, at War Memorial Stadium in Laramie. Williams, now a redshirt freshman, came on strong at the end of last season and made his first career start in UW's Arizona Bowl win.