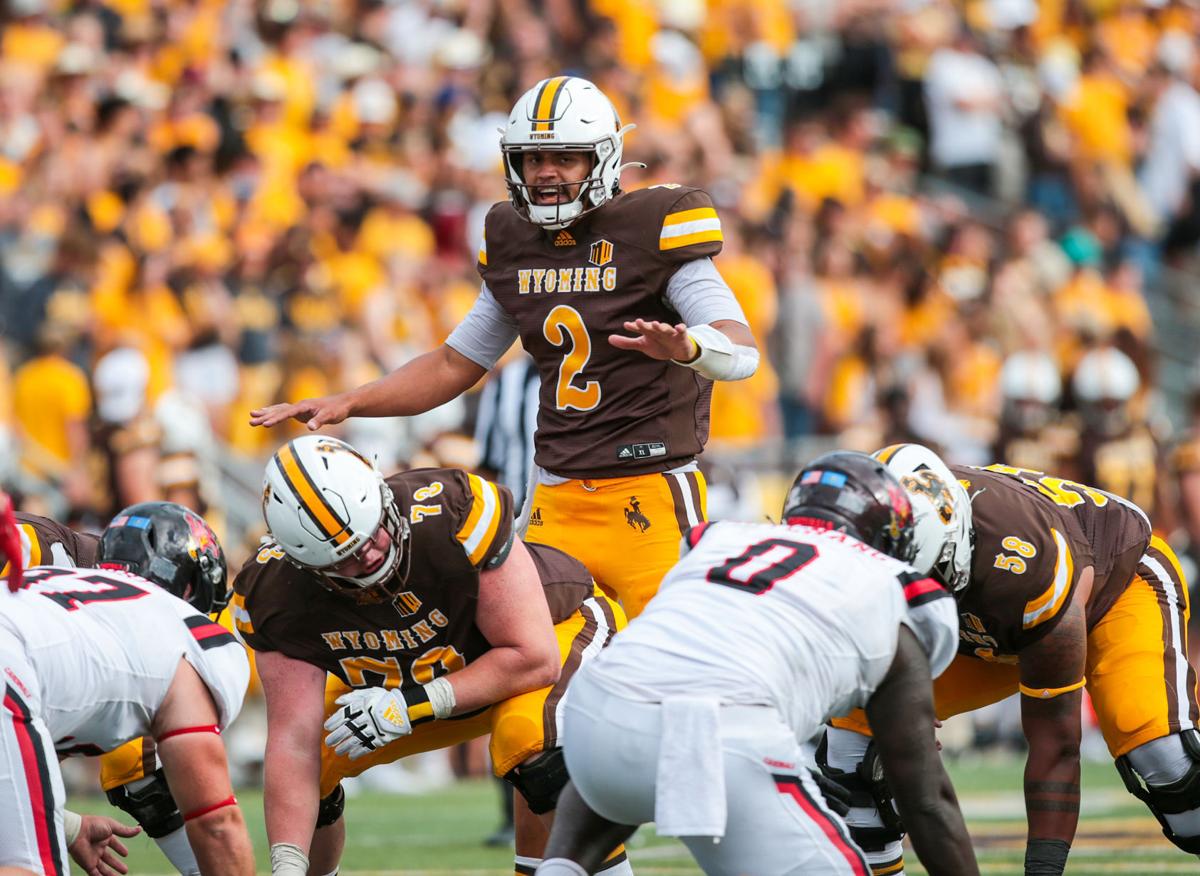 Wyoming quarterback Sean Chambers calls out a play at the line of scrimmage during the Cowboys' game against Ball State on Sept. 18 at War Memorial Stadium in Laramie. 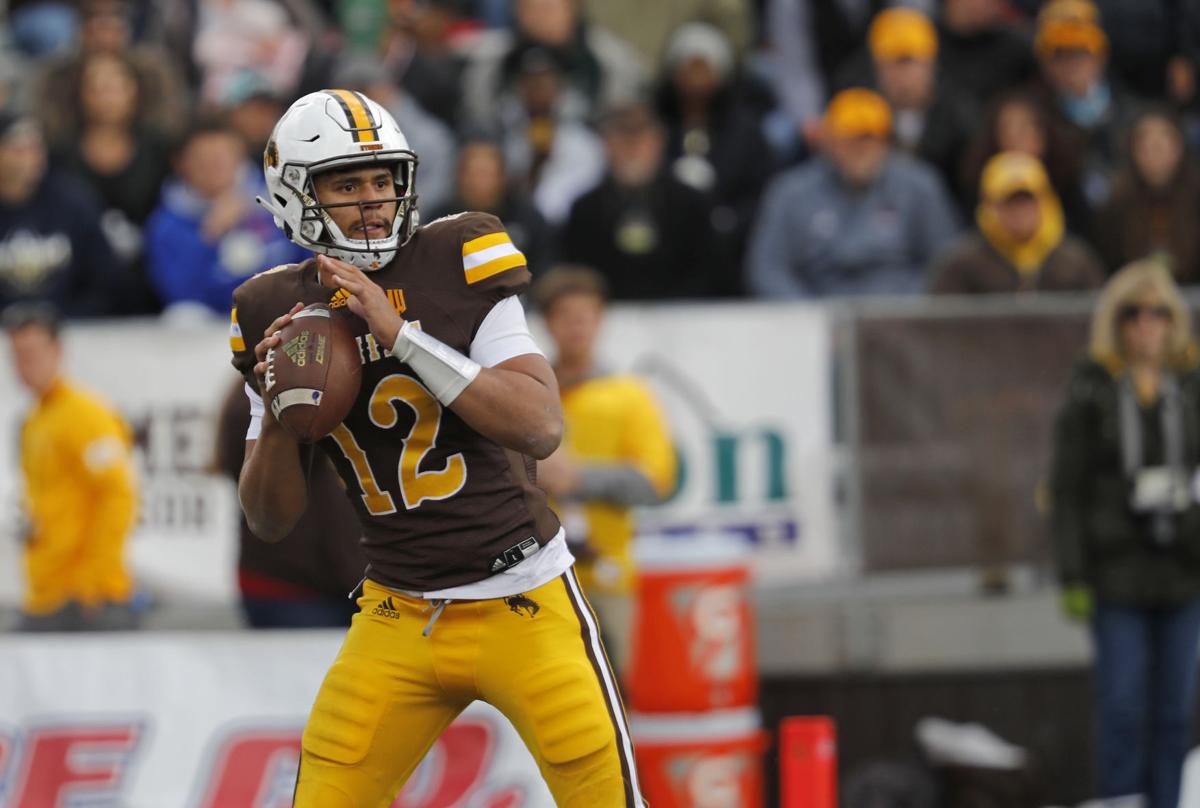 Wyoming quarterback Sean Chambers looks to pass during the Cowboys' game against New Mexico on Oct. 19, 2019 at War Memorial Stadium in Laramie. 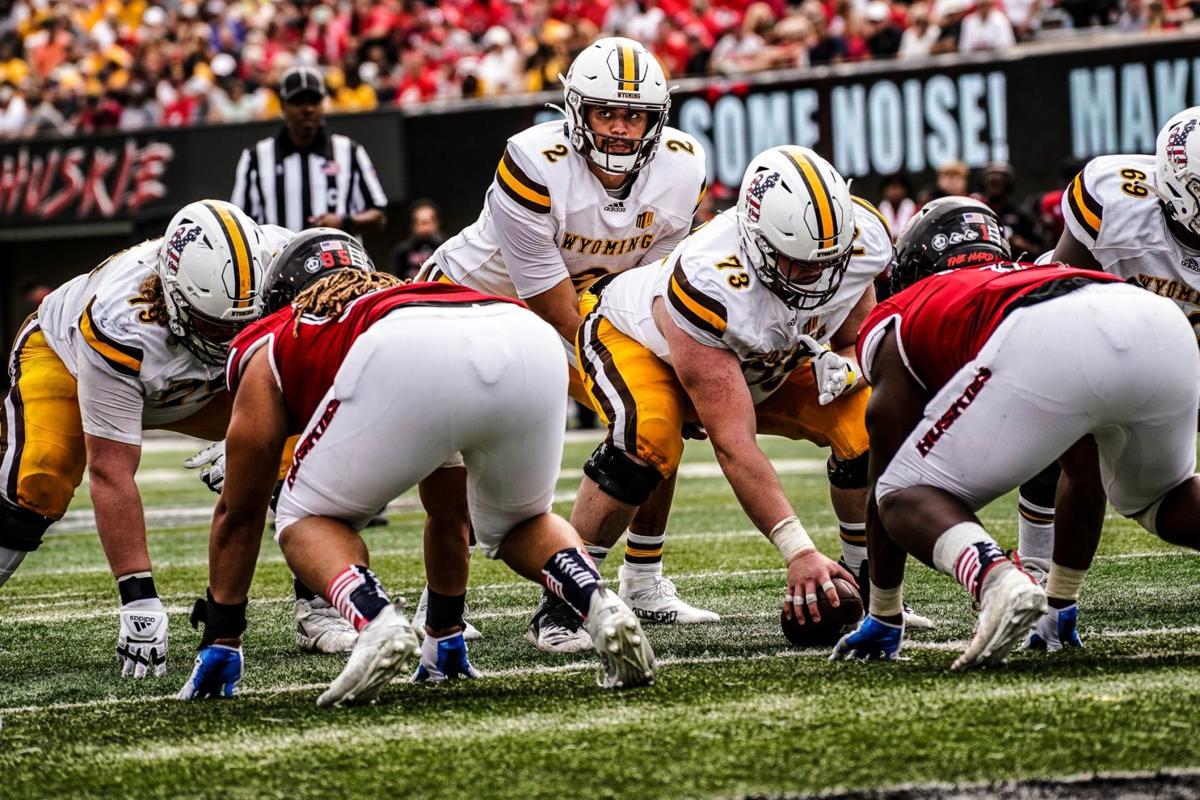 Wyoming quarterback Sean Chambers checks the Northern Illinois defense before taking the snap from center Keegan Cryder during their game Sept. 11 in DeKalb, Ill. The Cowboys lost 14-3 to New Mexico on Saturday at War Memorial Stadium in Laramie. 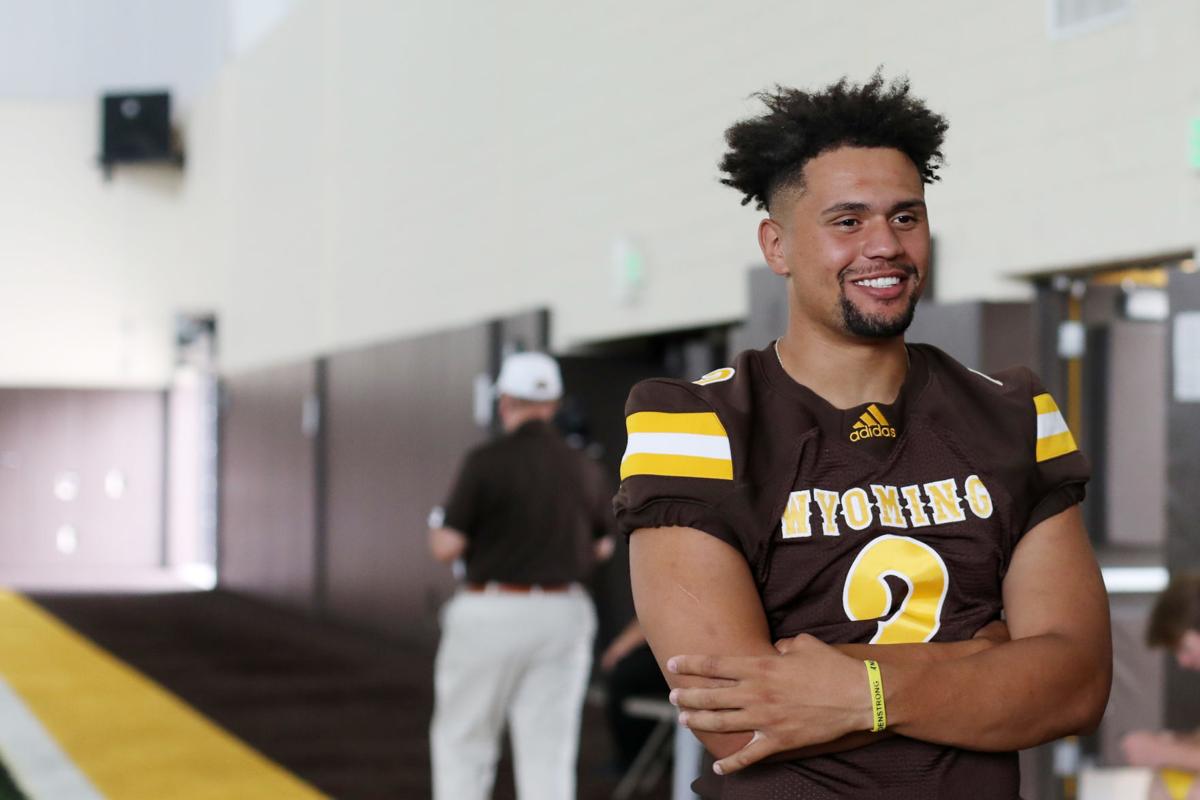 Quarterback Sean Chambers smiles as he talks with members of the press during Wyoming's Media Day at UW's Indoor Practice Facility on Aug. 6 in Laramie.

LARAMIE – Dejon Kelly admits with a laugh that his timing could have been better.

The longtime prep football coach took over the Firebaugh High program in 2016 as alumnus Josh Allen was about to make a name for himself at Wyoming.

Kelly is now in his second season as the Kerman High head coach, where Sean Chambers was the star quarterback before packing up his pickup truck and leaving for Laramie four years ago.

The ties that bind Allen and Chambers to California’s Central Valley remain strong.

“I love the Central Valley, that’s my home. I love Kerman and that whole area is near and dear to my heart,” said Chambers, who credits his mother, Britteny, a breast cancer survivor who works for an insurance company, and father, John, who works for a sheet metal company and coaches Pop Warner football, for his toughness and work ethic. “It’s so unique and it instilled a lot of values in me that I couldn’t have gotten anywhere else, so I’m very appreciative for that.”

After Allen wore a Firebaugh Eagles sweatshirt during his on-camera walk into the stadium earlier this season, Buffalo Bills fans purchased 4,600 hoodies in seven days to raise $100,000 for the Firebaugh High athletic department.

“I think that’s pretty cool,” Kelly said. “Just knowing him before he became the Josh Allen he is now, he’s still that humble person. The school got flooded with calls (about the sweatshirt), and the NFL merchandised it.”

Chambers doesn’t have quite the platform Allen does, but UW’s current starting quarterback does what he can to give back to the community.

Before joining the Cowboys for fall camp, the dual-threat quarterback held a passing camp at Kerman High this summer and gave the team a pep-talk.

“It was great. He put on a really good camp. My son even partook in the camp,” Kelly said. “It was fun to see the kids respond to him and have a good meeting with Sean afterwards. … He knows what it takes as a Kerman athlete to put in that hard work and overcome adversity.

“We all have stuff we have to go through. He’s been injured three times the last few years and has had to overcome those. His message was to persevere.”

‘Bro, you need to check out this kid Sean Chambers’

Allen’s recruitment story – or lack thereof – has been well documented. Every FBS program, including nearby Fresno State, ignored the raw physical freak from Firebaugh coming out of high school.

After sending out his own highlights from Reedley Community College to every school he could think of, Allen received interest from Eastern Michigan – where current Fresno State coach Kalen DeBoer was the offensive coordinator – and UW.

Ironically, after suffering a broken clavicle in his first game for the Cowboys in a 2015 loss to Eastern Michigan, Allen developed into a top-10 pick and is now an NFL most valuable player candidate for the second consecutive season.

“I tell you what, Josh Allen would have given his left leg to go to Fresno (State), and they took a guy who was 6-foot,” UW head coach Craig Bohl reflected this week. “We’re not interested in the guy who has been to every quarterback camp and Elite 11 and only plays quarterback and if he can’t do really well he’s going to transfer.

“We’re looking for a team guy. That was Josh Allen.”

During a subsequent visit to Firebaugh High, longtime UW assistant Pete Kaligis checked in with Kelly to see if there were any other hidden gems the Pokes should be aware of in the area.

Chambers, a rugged running quarterback and baseball catcher, was suddenly on the Cowboys’ radar.

“Coach Kaligis always used to come and visit me in Firebaugh, and I was like, ‘Hey bro, you need to check out this kid Sean Chambers because he is going to be a dude,’” Kelly said. “Sure enough, they did.”

Bohl even made an in-season trip to watch Chambers play under the Friday night lights at Kerman High. The extra effort was needed to lure Chambers to Laramie after he had originally committed to Rutgers and was also receiving interest from Fresno State.

“When I went out to Kerman, what I saw was a small town, an ag community that was almost a carbon copy of Firebaugh,” Bohl said. “I think there were some common themes between Sean and Josh. … I also saw an unbelievably competitive guy. Sean was out there trying to block a punt and dove and landed on his head. And I thought, OK, here’s a quarterback that’s a catcher on the baseball team. We can clean up his fundamentals, but that DNA as far as him being competitive, it’s there.

“It was a neat, neat evening that I spent at the ballgame. They have some of the best tacos in the world there, and I was able to get back home and then we were able to close the deal and get him.”

Bohl making the trek from Laramie to Kerman, a town of 13,500 located 15 miles west of Fresno and 28 miles southeast of Firebaugh, made UW stand out during the recruiting process.

“The entire crowd was wearing red and there’s only one person in the whole crowd wearing yellow,” Chambers said. “That was coach Bohl, which was pretty cool, I thought. The town thought it was cool, too. It was a neat feeling, a neat experience.”

Chambers made an official visit to UW on Sept. 30, 2017. The three-star prospect met Allen, who passed for three touchdowns during a 45-10 victory over Texas State.

The size of Laramie and the scene at War Memorial Stadium sold Chambers on becoming the next quarterback to leave the Central Valley for the High Plains.

“I felt really at home here when I took my visit and I knew this was the place I wanted to be,” Chambers said. “(Allen) didn’t have to say anything. Seeing that he’s from 25 minutes away from where I’m from, I knew that if he liked it then I would like it. We kind of grew up in very similar towns. I knew that if he enjoyed being out here and he valued being here, then I would.”

Bohl believes Chambers has a lot more in common with Allen than being raised in the Central Valley and playing quarterback at UW.

They were both big, strong, multi-sport athletes in high school. Both were developmental prospects who have had to overcome injuries.

And they are both winners.

Allen led UW to the Mountain West championship game in 2016. The 6-foot-5, 237-pound NFL franchise quarterback has dramatically improved his passing accuracy since coming back from a shoulder injury in 2017 to lead the Pokes to a win over Central Michigan in the Potato Bowl.

After overcoming three season-ending injuries, including last year’s fractured leg in the opener at Nevada, Chambers is just happy to have an opportunity to correct his mistakes and play again this week.

And his teammates have his back after last week’s rough outing in the 24-14 loss at Air Force.

“Sean is a great guy, and I know that he will bounce back from any adversity he faces,” defensive tackle Jordan Bertagnole said. “I look forward to seeing what he’s going to do because I believe that he’s going to put on a show this next week.”

The Cowboys (4-1, 0-1 Mountain West) will obviously need a bounce-back performance at quarterback against Fresno State on Saturday at War Memorial Stadium (1:30 p.m., FS2).

Unlike Allen, who missed UW’s 13-7 home loss to the Bulldogs in 2017 due to injury, Chambers will get a chance to play against the Central Valley’s favorite team.

“And we’re in hopes that Sean is going to take that same trajectory. He’s got the competitiveness, he’s got a strong arm, he’s got to learn how to play quarterback better.”

Chambers is fine with the comparisons to Allen and is up for the challenge.

The Bulldogs (4-2, 1-1) are led by Washington transfer Jake Haener, who is third in the FBS with 2,230 passing yards with 18 touchdowns and six interceptions.

Chambers has thrown for 893 yards with six touchdowns and three interceptions.

“Rome wasn’t built in a day,” Chambers said. “I know Josh wasn’t perfect when he was at Wyoming. He was a guy that was developed and was made into the player he is today. It definitely is inspiring. I know that I’ve got a lot of work to do and I don’t want to be compared to a guy like that because that’s him. I know he wouldn’t want to be compared to me because that’s who he is.

“I mean, it’s nice being compared to Josh like that, but I’m my own player and I’ve got my own name, so I’m just going to try to write my own story.”

Is there a chance Levi Williams gets the start Saturday against New Mexico?

The struggling Pokes are reopening the QB competition following two straight losses and a sputtering offense.

Wyoming quarterback Sean Chambers calls out a play at the line of scrimmage during the Cowboys' game against Ball State on Sept. 18 at War Memorial Stadium in Laramie.

Wyoming quarterback Sean Chambers looks to pass during the Cowboys' game against New Mexico on Oct. 19, 2019 at War Memorial Stadium in Laramie.

Wyoming quarterback Sean Chambers checks the Northern Illinois defense before taking the snap from center Keegan Cryder during their game Sept. 11 in DeKalb, Ill. The Cowboys lost 14-3 to New Mexico on Saturday at War Memorial Stadium in Laramie.

Quarterback Sean Chambers smiles as he talks with members of the press during Wyoming's Media Day at UW's Indoor Practice Facility on Aug. 6 in Laramie.