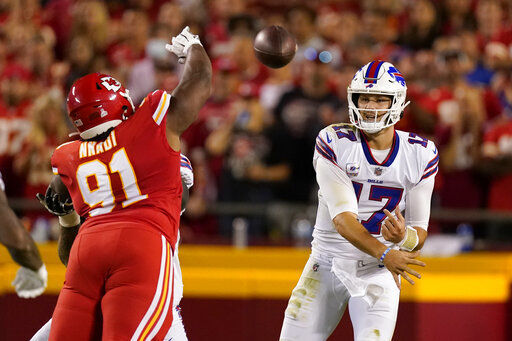 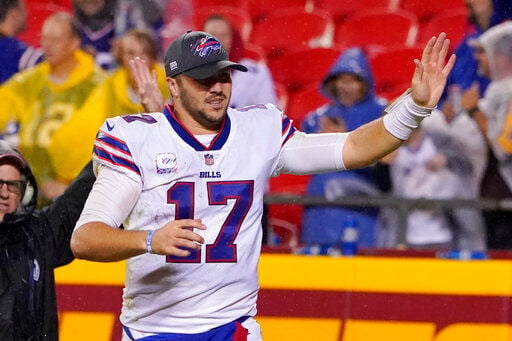 Buffalo quarterback Josh Allen celebrates as he runs off the field following the Bills' victory over the Kansas City Chiefs on Sunday night in Kansas City, Mo.

LARAMIE – Buffalo wide receiver Emmanuel Sanders, who is in his first season with the organization, has quickly realized something Bills and Wyoming fans have known for a while.

“(Number) 17 is special,” Sanders said after Buffalo’s 38-20 victory over the Kansas City Chiefs on Sunday night at Arrowhead Stadium in a rematch of last year’s AFC Championship Game. “Special”

Allen was a special talent during his time with the Cowboys, but still a pretty raw prospect entering his rookie season three years ago.

UW head coach Craig Bohl reflected on Allen’s remarkable transition to NFL most valuable player candidate on Monday after Allen shredded the Chiefs’ defense for 315 yards passing with three touchdowns and no interceptions and a team-high 59 yards rushing and another touchdown.

“It has been heartwarming for me,” Bohl said. “I believe playing quarterback in the NFL is the hardest thing in all of sports. To see him take his physical skills and hone that up into understanding how to play quarterback has been great.”

Bohl had discussions with Bills head coach Sean McDermott and offensive coordinator Brian Daboll about the type of person and player they were getting when Buffalo traded up to select Allen with the No. 7 overall pick in the 2018 draft.

“I spent a great deal of time with their head coach and said, ‘You know what, he’s immature,’” Bohl said. “That’s not a knock. When they took him, I don’t think he shaved. Now he’s got a beard. I said he’s really skilled, but you’re going to have a hard time with him when he’s younger. He has been ahead of the curve. …

“I spent some time with the offensive coordinator. We had dinner together. Brian has done a great job mentoring him, and you’re seeing a complete quarterback. What you will never see is him shy away from being competitive.”

Allen, the runner-up for NFL MVP last season to Green Bay’s Aaron Rodgers, is a frontrunner for the award again after completing 62.3% of his passes for 1,370 yards with 12 touchdowns and two interceptions during the Bills’ 4-1 start.

The 6-foot-5, 237-pound franchise quarterback has also rushed for 188 yards and two touchdowns.

A lot of Wyoming fans will be watching and thanking this week’s opponent – the Pokes host Fresno State on Saturday at War Memorial Stadium (1:30 p.m., FS2) – for not recruiting Allen from nearby Firebaugh, California.

“I know this, he rides for the brand,” Bohl said. “His parents come back for the first game. He loves the University of Wyoming and he’ll never forget his time here.”

Here’s a look at how other former Wyoming Cowboys currently on NFL rosters fared during Week 5:

Jacob Hollister, tight end, Jacksonville Jaguars: Caught a 1-yard touchdown, his first of the season, from No. 1 overall pick Trevor Lawrence during the Jaguars’ 37-19 home loss to the Tennessee Titans.

Andrew Wingard, safety, Jacksonville Jaguars: Finished with five tackles during the Jaguars’ loss to the Titans.

Marcus Epps, safety, Philadelphia Eagles: Finished second on the team with eight tackles during the Eagles’ 21-18 home win over the Carolina Panthers.

Tashaun Gipson, safety, Chicago Bears: Returned from a hamstring injury and finished with three tackles, one quarterback hit, 1.0 sack and 1.0 tackle for loss during the Bears’ 20-9 road win over Las Vegas in what turned out to be Jon Gruden’s final game as the Raiders’ head coach.

Carl Granderson, defensive end, New Orleans Saints: Was credited with one tackle, 1.0 sack and 1.0 tackle for loss during the Saints’ road win at Washington.

Mike Purcell, defensive tackle, Denver Broncos: Did not have any tackles but had one pass defended during the Broncos’ 27-19 road loss to the Pittsburgh Steelers.

Tyler Hall, cornerback, Los Angeles Rams: Did not record any statistics during the Rams’ 26-17 win over the Seattle Seahawks.

Tyler Gentry, wide receiver, Buffalo Bills: Was not activated from the practice squad for the Bills’ road victory at Kansas City.

Austin Fort, tight end, Tennessee Titans: Was not activated from the practice squad for the Titans’ 37-19 road win at Jacksonville.

Rico Gafford, wide receiver, Denver Broncos: Was not activated from the practice squad for the Broncos’ road loss at Pittsburgh.

Eddie Yarbrough, defensive end, San Francisco 49ers: Was not activated from the practice squad for the 49ers’ 17-10 road loss to the Arizona Cardinals.

Taven Bryan, defensive tackle, Jacksonville Jaguars: The former Natrona County High standout did not record any statistics during the Jaguars’ loss to Tennessee.

Buffalo quarterback Josh Allen celebrates as he runs off the field following the Bills' victory over the Kansas City Chiefs on Sunday night in Kansas City, Mo.