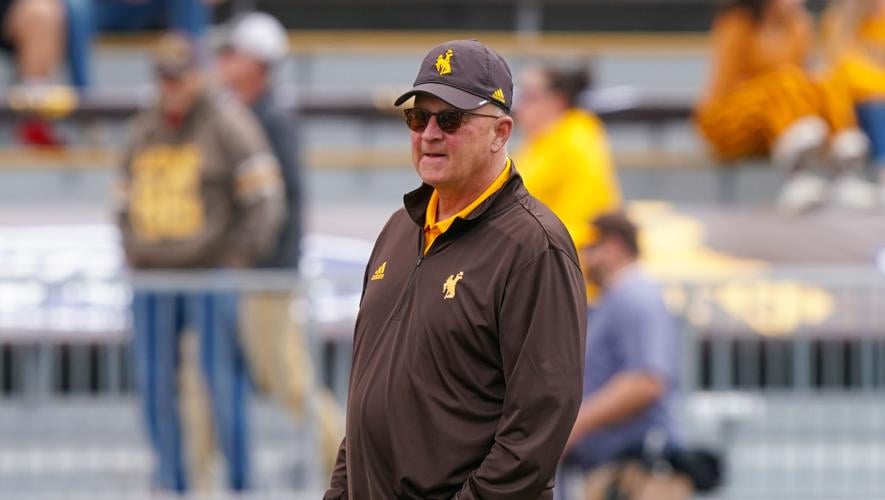 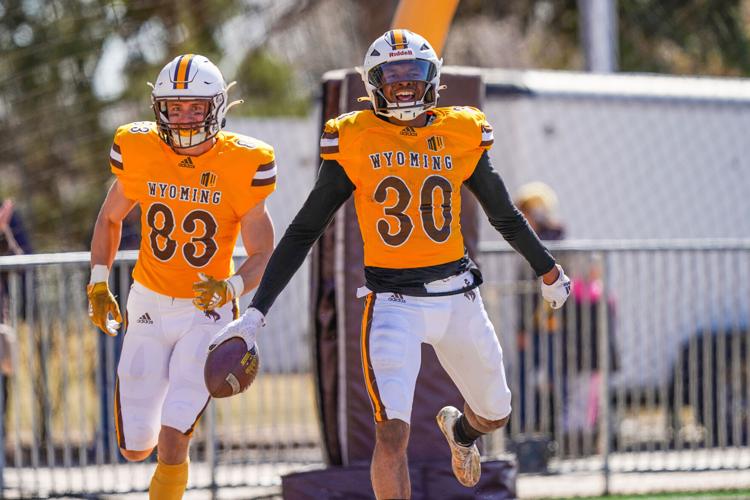 Wyoming running back Dawaiian McNeely celebrates after his touchdown run during the Brown and Gold spring game April 30 at War Memorial Stadium in Laramie. 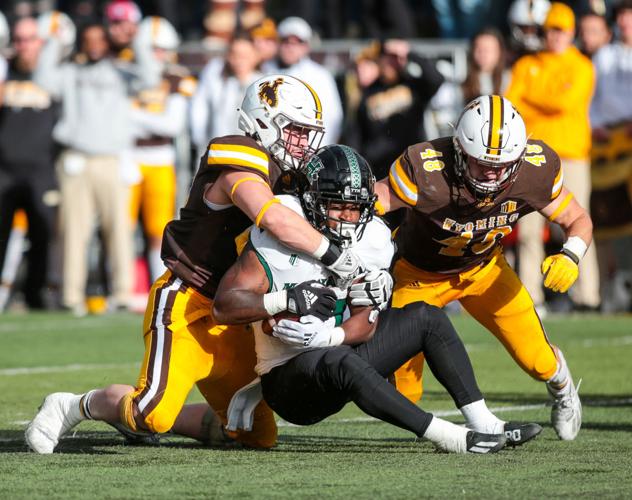 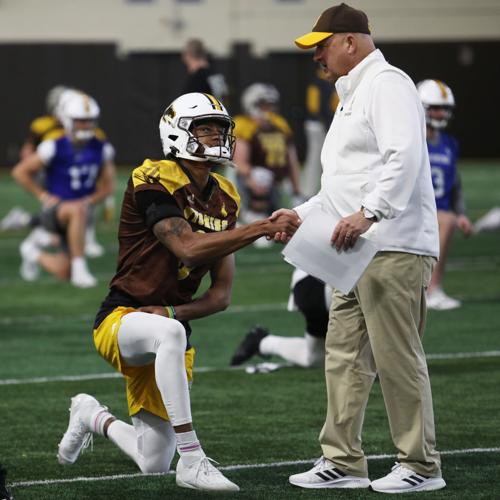 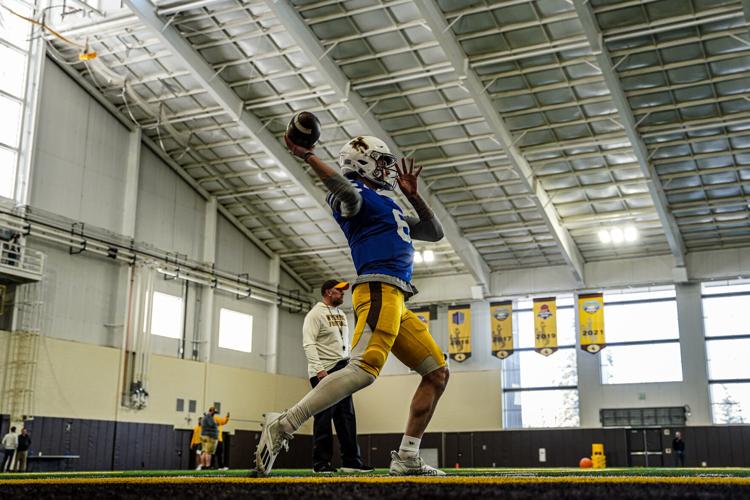 On one side is the old-school Wyoming head coach.

That version of Bohl blew down from the press box after the spring game to read his players the riot act for participating in an NFL-style celebration after the game-clinching interception.

“It was a good thing I was perfect when I was in college,” Bohl joked after a brief cooling-off period before his postgame press conference. “I hope they understand.”

A different side of Bohl emerged in the aftermath of a volatile winter for the program, which saw 13 players enter the NCAA transfer portal between the end of the Famous Idaho Potato Bowl and the start of spring practice.

Before embarking on his ninth season leading the Cowboys, Bohl vowed to take self-inventory and make changes to improve his relationship with his players.

“I have made a point to be more present,” Bohl said. “Many times as college head football coaches our time gets spread out so many different ways. When you’re a CEO head coach, that’s a negative side. I’m trying to meet more with the players, not so much on formal meeting times, but I always make a point to go into the training table and sit down with them, which is why I’ve probably gained some weight.

“And then just other informal conversations to let them know that we care about them. I care about them. But to lead them you’ve got to know them, and I looked myself in the mirror and said I’ve got to improve in this area and get a better pulse on our team.”

Determining a time of death for the 2021 Pokes is difficult.

UW started 4-0 for the first time since 1996 before stumbling through Mountain West play with an unacceptable 2-6 record.

Sean Chambers was benched and replaced by Levi Williams, but not until UW was out of contention in the Mountain Division.

The home losses to New Mexico and Hawaii were embarrassing. The dominant wins over rival Colorado State and eventual MW champion Utah State provided short-term gratification during an excruciating 7-6 campaign.

“It was definitely frustrating to lose some of the games we lost and then completely destroy the Mountain West champions like we destroyed them,” nose guard Cole Godbout reflected.

So how could an experienced team with so many seniors and so much depth lose to the lowly Lobos on Homecoming in Laramie and also push the Aggies all over the field in Logan, Utah?

“I was confused myself. I was like, ‘Damn, what’s going on?’” cornerback Cameron Stone said of the Pokes’ wild inconsistency. “I think collectively our team chemistry has gone up, which is something we didn’t really have as a whole. I think all the guys now will feed off each other and the chemistry is a lot better.”

Williams and Chambers seemed to be highly respected in the locker room. However, the duo did not get the job done on the field, combining for 2,115 yards passing with 15 touchdowns and 12 interceptions.

“Everybody was buying in and competing and working hard and executing,” Chambers said after the devastating defeat to New Mexico, which turned out to be his final game as UW’s starting quarterback. “We had a good week of preparation. I have no idea.”

When Bohl’s formula for offensive success works – controlling the line of scrimmage and breaking the opponent’s will with a bruising running game – it’s simply beautiful for Cowboy fans to watch.

During the emphatic 52-38 victory over Kent State in the Potato Bowl, Williams earned most valuable player honors after rushing for 200 yards and four touchdowns.

“It’s really awesome,” Williams, who also led UW to a win in the 2019 Arizona Bowl, said of picking up the Potato Bowl MVP trophy after starting the season as Chambers’ backup. “It’s about not quitting and knowing your role. I think I did that role pretty well.”

Shortly after Bohl had a bucket of French fries dumped on his head on the blue turf, Williams announced his intention to transfer to Utah State.

Neither quarterback is projected to start for their new team in 2022.

“I’ll stay in touch with those guys. We came in here together and those will be brothers for life,” right tackle Frank Crum said. “I wish them success at Montana State and Utah State. It was sad to see them go, but if they felt like they could prosper somewhere else, that’s up to them.”

A list of other popular players – including Valladay, star wide receiver Isaiah Neyor and starting cornerbacks C.J. Coldon and Azizi Hearn – followed the quarterbacks out the door.

But the attrition, coupled with the addition of some notable transfers, headlined by Utah State quarterback Andrew Peasley and Mississippi cornerback Jakorey Hawkins, allowed a younger roster to bond during winter conditioning.

“I really just look at it as the new normal in college football. It is what it is,” Easton Gibbs, who will replace All-American Chad Muma at middle linebacker, said of the roster turnover created by the one-time transfer rule. “You can look at it as good or you can look at it as bad. Whatever viewpoint you want to have on it you can have on it. I personally think it’s a good thing.

“We are a lot closer as a team with a lot more team-focused guys, which I think is going to be really beneficial to us. And we brought in some guys that are good dudes and we’re excited to play with them.”

UW’s 14 spring practices and the Brown and Gold Game were defined by competition after most starting positions last year had been wrapped up before fall camp.

The battle for spots will only intensify in fall camp with the arrival of the 2022 recruiting class.

“We’re a family here,” senior offensive lineman Eric Abojei said. “No one is being excluded, everyone is welcome, everyone is coached the same way and everyone is trying to battle. You can definitely tell a lot of those guys are here to fight for their spot.”

Bohl did not release a post-spring depth chart. Only two players, backup safety Michael Chavez and super senior defensive tackle Ravontae Holt, decided to enter the portal with the hope of playing somewhere else next season. UW received a commitment from Alabama defensive end Keelan Cox hours after the spring game.

A new leadership group, which will include program staples like Swen and Gibbs and fresh faces like Peasley and Hawkins, will try to continue the team building during player workouts this summer.

“I just want us to get closer as a family right now,” Swen said. “If you can’t play football as a family there is no reason to go out there.”

After an offseason of chaos, the coaching staff is confident the 2022 Cowboys will have a smoother ride.

UW should be more efficient in the passing game during Tim Polasek’s second season as offensive coordinator. Peasley provides experience, but the talented junior will have to hold off Evan Svoboda, Hank Gibbs and Jayden Clemons in fall camp to officially take the reins.

Defensive coordinator Jay Sawvel expects to make up for the loss of some experienced players with more overall team speed and play-making on the back end. The Pokes should be strong up the middle with Gibbs, Godbout and defensive tackle Jordan Bertagnole looking like all-MW players in the spring.

“You can tell people have a chip on their shoulder,” linebackers coach Aaron Bohl said. “They want to prove to people that everything is all right. I understand the concern in the outside world when you see so-and-so leave. But a lot of these guys have been taking a thousand reps at fall camps and spring practices for two years and they’re like, ‘I’m a pretty good player and I’m ready to step in and showcase that. It’s going to be OK.’”

Something went terribly wrong last season. Opinions on the root cause of the problems vary.

“I would say pointing fingers maybe when things got rough,” Stone said after a long pause. “Which we won’t do this year. I know that for a fact. We just weren’t collectively in tune with each other.”

Craig Bohl, who will tie Lloyd Eaton (1962-70) for the longest head coaching tenure in program history this season, seems excited to walk inside the white lines with this team.

“To have a young, hungry football team is a really good thing to do to serve as a head football coach,” Bohl said. “Now they’re going to do some bonehead things because they’re young, but the fact that they’re hungry and there’s no sense of entitlement … my best friend is a banker and he said bankers make bad loans in good times. When you get complacent that’s when you think you’ve arrived, and this group has not arrived.

Wyoming running back Dawaiian McNeely celebrates after his touchdown run during the Brown and Gold spring game April 30 at War Memorial Stadium in Laramie.