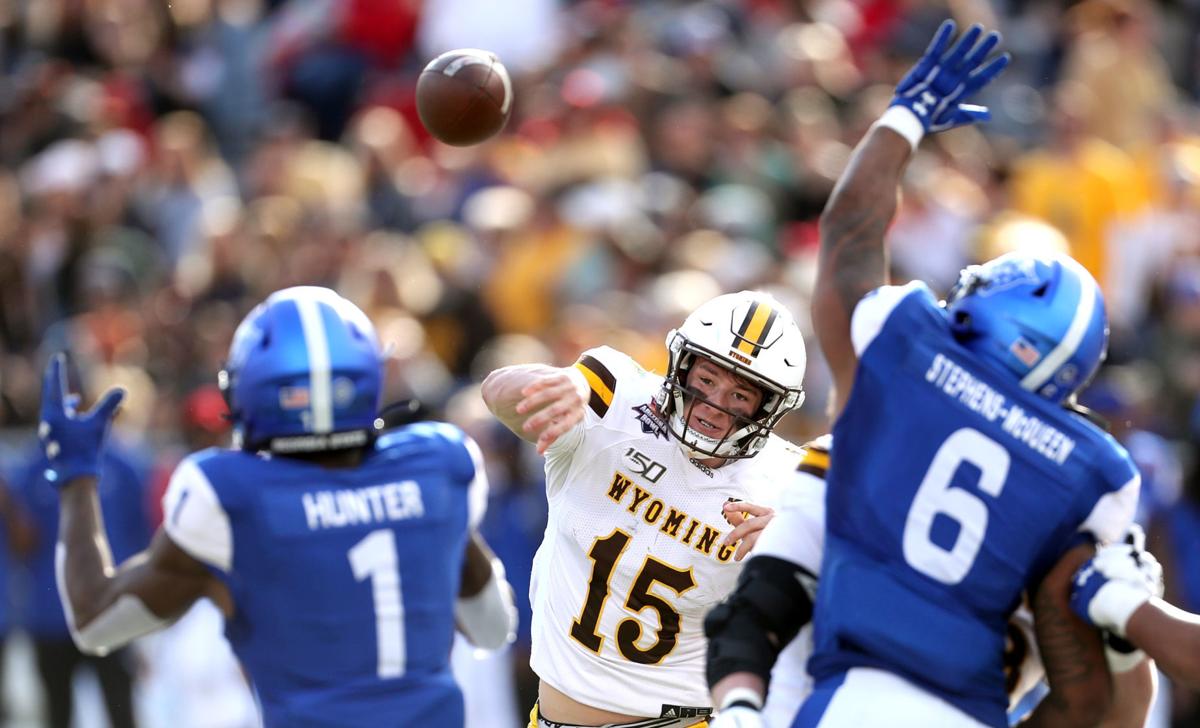 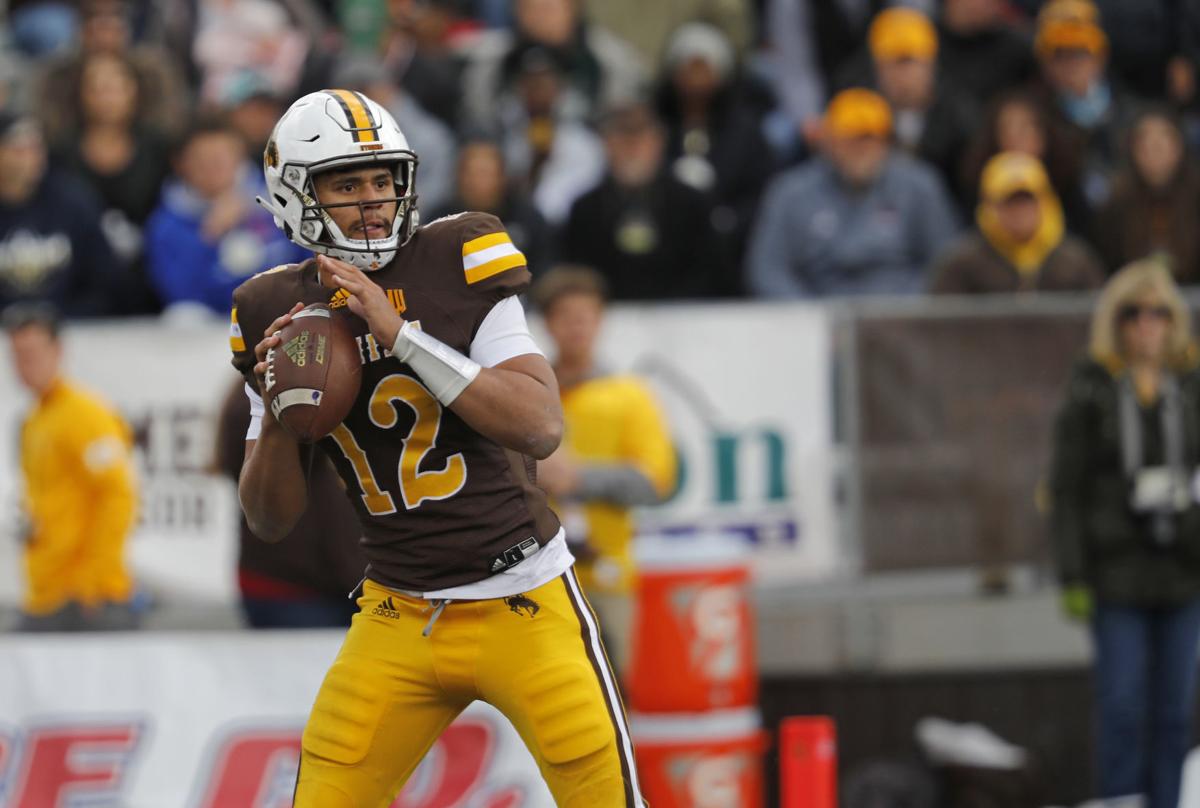 In fact, even though there’s still more than a month until the Cowboys start spring practice and six months before fall camp begins in August, it’s something Bohl is more than considering.

“We’re kind of leaning toward doing that,” he said.

Wyoming has a pair of quarterbacks that each started games last season in Sean Chambers and freshman Levi Williams. Chambers, who will be a redshirt sophomore next season, began the season as the starter before a season-ending injury limited him to just eight games. Williams ended it with that distinction, helping lead the Cowboys to a 38-17 Arizona Bowl win over Georgia State in his lone start.

Chambers, who’s still recovering from knee surgery, will miss most of spring practice, though Bohl said Wednesday that Chambers may be able to return toward the end of the spring on a limited basis. That will leave Williams, who will get to keep his redshirt after playing in just three games this past season, to get most if not all of the first-team reps before Chambers returns on a full-time basis in the fall.

“We’ll try to have Sean come along physically in the course of the summer, but we’re not going to rush Sean along just to try to get him out there to get some repetitions. We’re going to make sure he’s able to come back and be more than just serviceable.”

Chambers and Williams are two of three scholarship quarterbacks on Wyoming’s current roster. Tyler Vander Waal, who started the last four games of the regular season in Chambers’ absence and 13 games total over the last two seasons, transferred to Idaho State after falling behind Williams on the depth chart late in the season. Incoming freshman Gavin Beerup will join the team this summer but will be a strong redshirt candidate should Wyoming be able to stay healthy at the position.

But that’s been an issue for the 6-foot-3, 220-pound Chambers, whose physical running style as a dual-threat signal caller has resulted in season-ending injuries each of the last two seasons. Chambers has rushed for 896 yards and 12 touchdowns in 12 career games. His 10 rushing touchdowns this past season would’ve ranked ninth among Football Bowl Subdivision quarterbacks had he played enough games to qualify.

But Chambers has completed just 45.9 percent of his passes for his career, a clip that dipped to 43 percent this past season. Neither quarterback has a large sample size to go off of with Chambers attempting just 67 career passes so far, but Williams showed he could do a little bit of both in the limited playing time he got this season.

Bohl started rotating the 6-5, 213-pounder with Vander Waal in the final two games of the regular season. Williams completed more than 60 percent of his passes before going just 11 of 26 in his first career start, though his 234 yards passing and three passing touchdowns in the bowl game were both season-highs for a Wyoming quarterback.

Wyoming also got plenty of use out of Williams’ legs. He ran 40 times for 181 yards and a pair of touchdowns, including a team-high 79 yards against Air Force in the regular-season finale.

Williams and Chambers combined to average nearly 12 carries per game this season, the kind of usage Bohl said he wants to lessen on his quarterbacks in the running game. Wyoming’s primary offensive concern is improving efficiency in a passing game that’s ranked in the bottom 2 of the Mountain West in yards and last in the league in completion percentage the last two seasons.

Once headed elsewhere, QB Levi Williams is now helping Wyoming in a pinch

Williams gave the offense a spark in that department with his performance down the stretch, but Bohl said he believes the two quarterbacks’ skill sets are similar enough to play both without tipping off opposing defenses as to what’s coming.

“The fact both of these guys show a really good ability to run at times that are pre-determined and at times are unscripted, that really opens up our playbook,” Bohl said. “Now we would not like to have them run as much as we have, but the dual threat of both of those guys I think warrants that both of them are going to get a really hard look. (Former Florida coach) Steve Spurrier ran quarterbacks in every other play. I doubt we’ll do that, but I think you could see both of them play.”

Bohl said he’ll wait to see how both quarterbacks perform in fall camp when Chambers is back at full speed before making any final decisions.

“I think it’s going to be great, healthy competition,” Bohl said. “We’ll have two very capable quarterbacks that are great competitors and provide a lot of leadership.”

Once an ankle injury limited running back Trey Smith to just four games this season, Wyoming pursued a medical hardship waiver and thus a sixth year of eligibility for the graduate transfer.

Bohl said that request has been granted by the NCAA, meaning Smith will officially return to the Cowboys’ backfield next season. Smith, who used his redshirt during his freshman season at Louisville in 2015, ran for 227 yards and averaged 5.2 yards per carry before sustaining the season-ending injury against Tulsa on Sept. 21.

“We should be pretty deep at the running back position,” Bohl said.

Levi Williams may be the only available scholarship quarterback during spring drills.