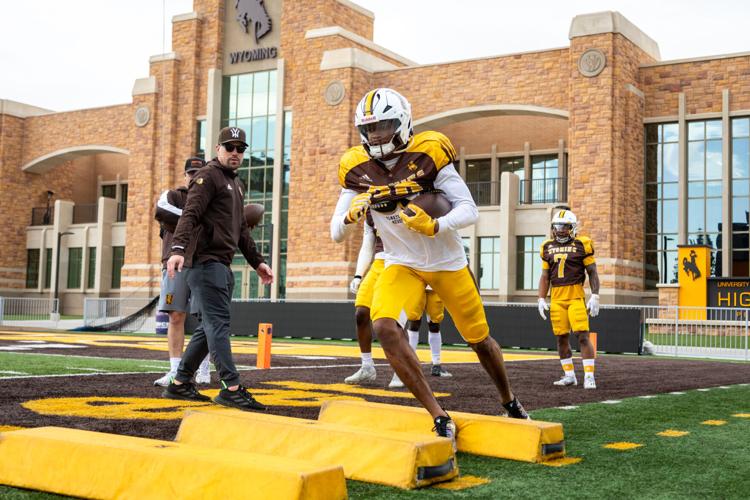 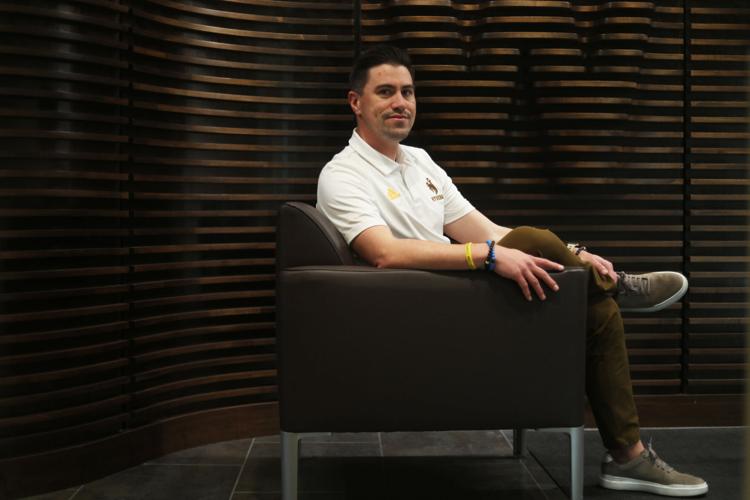 University of Wyoming running backs coach and Director of Player Personnel Gordie Haug sits for a portrait on Feb. 4 at the High Altitude Performance Center in Laramie. 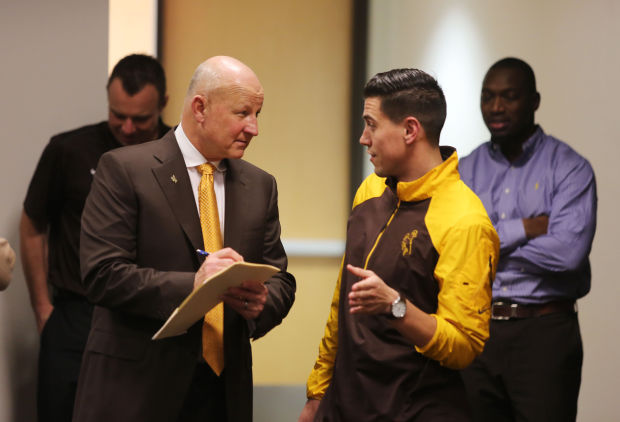 LARAMIE – On the eve of fall camp, Gordie Haug received a promotion.

Craig Bohl wants Haug to “double-down” on the program’s recruiting efforts as UW adapts to the transfer portal era.

The Cowboys lost 15 players to the portal and added nine transfers to the roster during the last cycle. The newcomers came from Power 5 programs (five), Mountain West rivals (two) and junior colleges (two).

“Recruiting has always been the lifeblood of any program. So just doing the best you can with the resources you have is what we talk about every day,” Haug said of the changing recruiting landscape after Monday’s practice. “We’re fortunate here at the University of Wyoming to have unbelievable resources to get the right type of guy. That’s really important to us.”

Jake Davies, a 6-foot-6, 240-pound tight end prospect from Yorkville, Illinois, added to the surge by announcing his intention to play for the Pokes Tuesday night.

Bohl is hoping to reduce the number of outgoing transfers after quarterbacks Levi Williams (Utah State) and Sean Chambers (Montana State) left and seven other players moved on to Power 5 programs following the 7-6 finish in 2021.

But UW’s old-school head coach understands the portal is going to be a factor every offseason.

“It certainly has changed, and a guy like myself needs to evolve,” Bohl said. “Gordie came here as a recruiting coordinator. If you look at the makeup of our football team, through that time our talent level improved exponentially. I’m looking at the lay of the land with where we’re at and the skill set he has.

“(Haug) had a desire to coach running backs and he’s a good running back coach, but we’re going to ask him to double-time and double-down and reengage with our strategy. Everything from our high school recruiting to what we’re doing with transfers and everything else.”

Haug arrived at UW with Bohl in 2014 as the director of recruiting. He started coaching the wide receivers in 2015 and has been coaching the running backs since 2018.

At the conclusion of the 2021 season, there were 16 Cowboys on NFL rosters, which was the most among MW programs.

“He’s very capable, he’s a bright guy, he’s watched a lot of tape,” Bohl said of Haug. “A lot of (NFL) guys you see (photos of) hanging up in the (Indoor Practice Facility), he identified those guys.”

Several transfers, including cornerbacks Harrell (Wisconsin) and Jakorey Hawkins (Mississippi) and linebacker Cole DeMarzo (Michigan State), are in the mix for starting spots or major playing time this fall.

Utah State transfer Andrew Peasley is the frontrunner to be the starting quarterback in the Aug. 27 opener at Illinois.

“It’s not a formula by any means,” Haug said of building through the portal. “That’s something where, if there’s a need, we need to explore it. If there’s not a need, high school is still where we want to be. All those things still matter to us. It’s just another piece to the puzzle of trying to make your program better.

“We’ll take advantage of it when we need guys, but predominantly we still want to get guys and develop them and do it the way we’ve done it here.”

Drake is from Robinson, Texas, and will play for new UW defensive tackles coach Oscar Giles, a longtime assistant with the Longhorns who knows the recruiting landscape in the Lone Star State as well as anyone.

“It has been fun to see him embrace all of our guys,” Bohl said of Giles, who is living in the dorms with the freshmen during fall camp. “Coach Mack Brown and I are dear friends and close, and he and I had a long conversation about Oscar.”

Boise State head coach Andy Avalos believes Hank Bachmeier's experience at quarterback and improved depth on the defensive line will lead to a bounce-back season after a 7-5 finish in 2021.

The Cowboys' defensive line won the day, but Monday's practice was designed to put the offensive line and quarterbacks under duress.

The Aztecs could be a candidate to join the Pac-12, but Brady Hoke is focused on winning the Mountain West after last year's disappointing loss to Utah State.

During Wyoming's football media day Wednesday, head coach Craig Bohl challenged his players to work together to hang a Mountain West championship banner before next year's event in the Indoor Practice Facility.

Oluwaseyi Omotosho didn't play high school football until his junior year, but the redshirt freshman is developing into an impactful defensive end for the Pokes.

The Pokes were their own worst enemy in key moments last season, but OC Tim Polasek believes fewer mistakes and a more efficient passing game can turn the offense around.

Pokes wide receiver Gunner Gentry, who missed all of the 2021 season after suffering two knee injuries in five months, is making his presence felt in fall camp.

University of Wyoming running backs coach and Director of Player Personnel Gordie Haug sits for a portrait on Feb. 4 at the High Altitude Performance Center in Laramie. 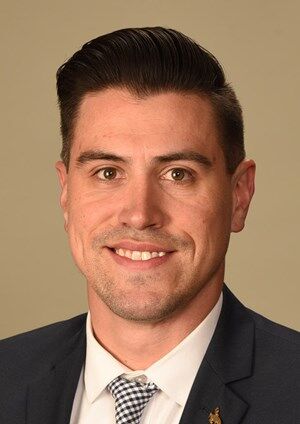