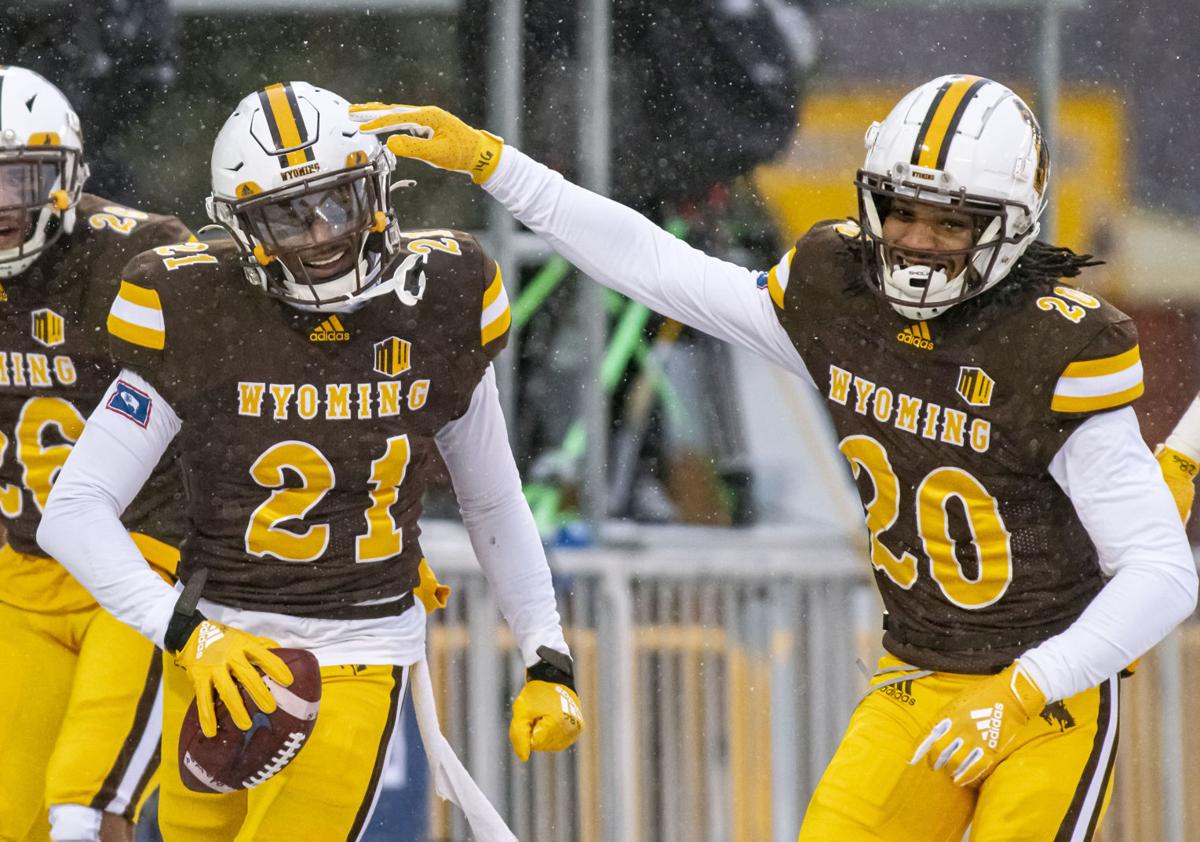 Wyoming's C.J. Coldon (21) celebrates an interception with fellow cornerback Azizi Hearn during the Cowboys' game against Boise State on Dec. 12, 2020, at War Memorial Stadium in Laramie. The duo is back this spring to lead a seasoned group of defensive backs that has 49 career starts among them. 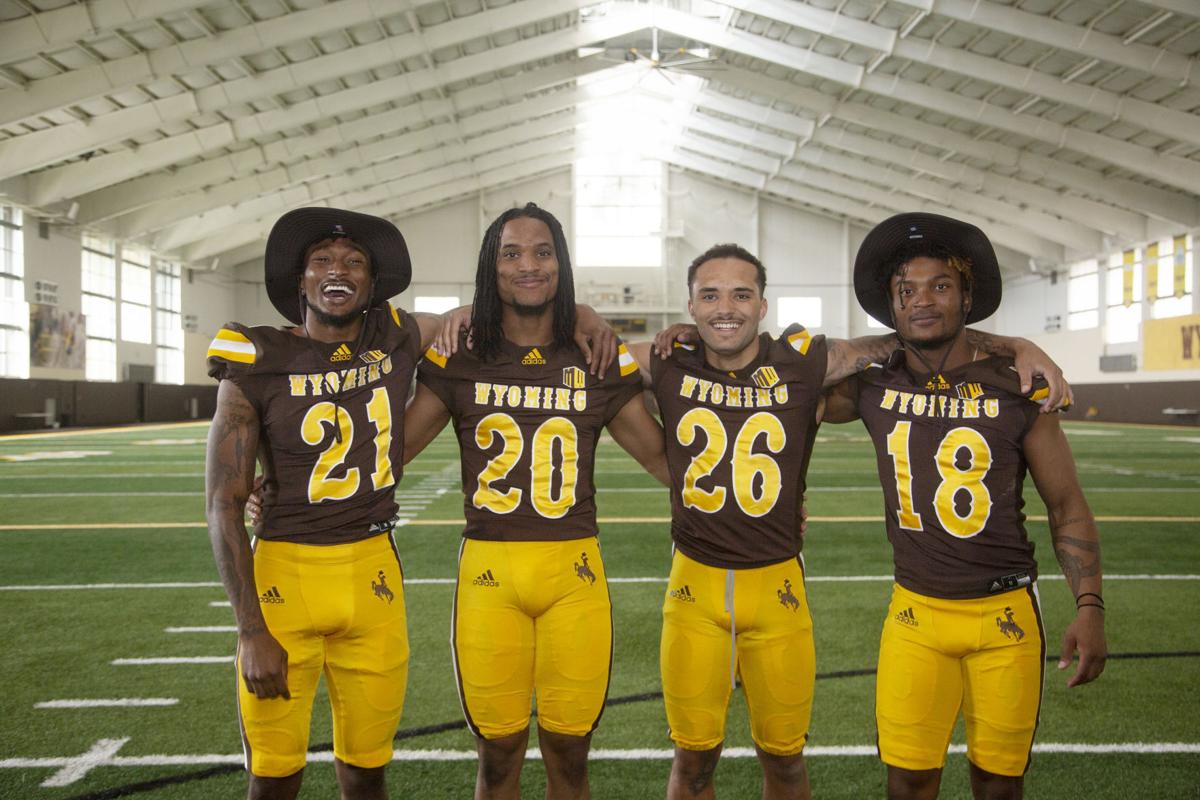 LARAMIE – Craig Bohl and the Cowboys desperately wanted to play.

But Wyoming’s high-speed ramp-up to the abbreviated 2020 season went off the rails in the opener.

“Here’s a couple things, and I’m going to cry,” Bohl recalled of the adversity the team was facing at Nevada. “Our whole freshman class was quarantined for I don’t know how many days. So we had no scout team. Then we had two quarterbacks going into the game that were healthy.”

Sean Chambers suffered a season-ending injury on the third snap, and Levi Williams did his best to rally the Cowboys, who lost 37-34 in overtime at Mackay Stadium in Reno.

Adding to the issues that night was a lack of conditioning for starting cornerbacks Azizi Hearn and C.J. Coldon, who faced arguably the best quarterback (Carson Strong), wide receivers (Romeo Doubs, Tory Holton) and tight end (Cole Turner) in the Mountain West that October night.

Hearn lost a bunch of weight sitting at home in California between the cancellation of the season and the announcement that the MW would play a conference-only slate.

Coldon was also struggling to get acclimated with the physicality and speed of the game following a bout with COVID-19 in mid-September.

“It drove an old coach to drinking,” Bohl said. “We’re in a better place right now.”

Hearn and Coldon started all six games of the 2020 season, growing stronger physically with improved performances along the way. They should be one of the top cornerback tandems in the MW this season.

“I feel like I’ve improved tremendously mentally, physically and understanding the game,” said Hearn, who transferred to UW from Arizona after the 2018 season. “My football intelligence is higher than it was last year. The game is slower for me now, and I see things I didn’t see before.

“Last year was kind of chaotic and it made me feel kind of blessed to have a regular summer, a regular spring ball, a regular fall camp. It kind of humbled me.”

Hearn started his final three games in the Pac-12 with the Wildcats in 2018 and finished with 37 tackles over 13 games (10 starts) for the Cowboys in 2019. He thought his return to Tucson for UW’s victory over Georgia State in the 2019 Arizona Bowl was the start of a special year.

“Then 2020 came around,” Hearn said. “We had a good winter, and then all the COVID stuff hit the air, so they sent us home. Then we were preparing to play Weber State week one in early September and got sent home gain. Then they called us back. As athletes we’re used to structure, and we didn’t have any structure last year. We went through it and we learned from it.

“I feel like it was a blessing for us. Some guys got experience for us that probably wouldn’t have played if it had been a normal year.”

Hearn led the team with four pass breakups and recorded a career-high seven tackles against Colorado State last season. Coldon, who was limited to a total of six games during the 2018 and 2019 seasons due to injuries, matched that total and had a team-high two interceptions in 2020.

“As soon as my quarantine was up, I hurried up and got on the road,” said Coldon, whose father and brother also tested positive for COVID-19 while he was back home in Belleville, Illinois. “It was difficult getting acclimated back to the weather and the air and football shape. I wasn’t in shape, so the first game was kind of difficult, it took a lot out of me. I had to get back in my groove.

“That was just important to me coming back for that year and playing and being here for my teammates.”

Hearn and Coldon established themselves as trusted starters during the otherwise miserable 2-4 campaign.

UW still has a lack of depth at cornerback, although redshirt Cameron Stone had a strong camp and nickel backs Keonte Glinton and Blake Harrington have been cross training at the position.

The Cowboys are in good shape at the safety spots with the return of Braden Smith, Rome Weber and Esaias Gandy. Keyon Blankenbaker will also get a lot of snaps as the starting nickel.

Despite giving up 420 yards passing and four touchdown passes against Nevada, the Cowboys finished the season ranked 28th in the FBS in passing yards allowed (202.7 per game).

“Their growth and maturity is light years from where it was last year, and I think we’re going to see that come game day,” Boyd said of Hearn and Coldon. “I’m very confident they’re going to be one of the best, if not the best, groups. That’s our goal. We want to be the best in America.”

THURSDAY: Wyoming continued its preparation for next week's season opener against Montana State.

DOUBLE TROUBLE: UW returns its two starting cornerbacks, Azizi Hearn and C.J. Coldon, who came on strong after a rough start to the 2020 season.

HE SAID IT: "Their growth and maturity is light years from where it was last year, and I think we're going to see that come game day." -- UW cornerbacks coach Benny Boyd.

Next man up: With Chuck Hicks transferring, Gibbs will take over full-time duties.

Sophomore delivers as next cornerback up after starter Azizi Hearn was ejected in first quarter against Montana State.

Wyoming's C.J. Coldon (21) celebrates an interception with fellow cornerback Azizi Hearn during the Cowboys' game against Boise State on Dec. 12, 2020, at War Memorial Stadium in Laramie. The duo is back this spring to lead a seasoned group of defensive backs that has 49 career starts among them.