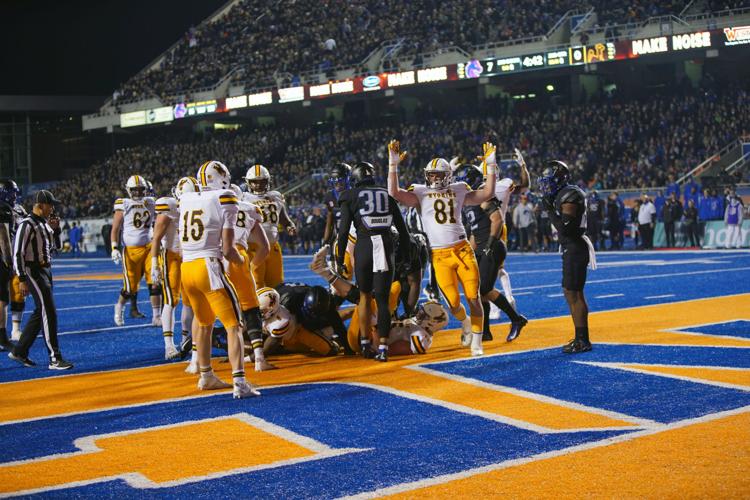 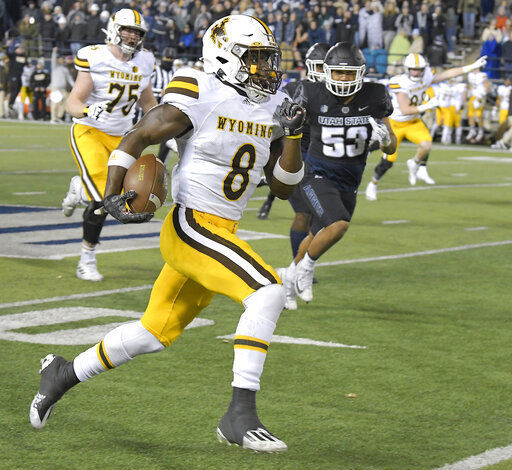 Wyoming running back Titus Swen runs for a touchdown in the Cowboys' game against Utah State last season in Logan, Utah.

LARAMIE – Wyoming football fans can start planning tailgates for five of the six games this fall at War Memorial Stadium.

The Mountain West and its broadcast partners released television schedules Thursday for the 2022 season.

UW’s home opener against Tulsa on Sept. 3 will kick off at 1:30 p.m. on Fox Sports 1. The Sept. 10 game against Northern Colorado is at 2 p.m. with broadcast information TBA.

The Pokes then open the MW slate under the Friday night lights in Laramie against Air Force at 6 p.m. on Sept. 16 (CBS Sports Network).

The Pokes lost to the Falcons, Spartans and Broncos on the road last season during a disappointing 2-6 finish in conference play.

A kickoff time for UW’s Oct. 22 game against Utah State has not been announced, but the battle for Bridger’s Rifle will be televised on the Fox Sports Networks.

The Pokes beat the MW champion Aggies 44-17 last season in Logan, Utah, and the teams swapped quarterbacks this winter with UW’s Levi Williams transferring to Utah State and Andrew Peasley joining the Cowboys.

UW’s opener against Illinois on Aug. 27 in Champaign, Ill., will start at 2 p.m. on the Big Ten Network. The Pokes are currently 11-point underdogs against the Illini.

The kickoff time for the Sept. 24 non-conference road game at BYU has not been announced, but the reunion of the former MW rivals will air on the ESPN Networks.

The Cowboys’ road games at New Mexico (Oct. 8) and Colorado State (Nov. 12) will both begin at 5 p.m. on CBSSN. The start time and broadcast information for the Oct. 29 game at Hawaii has not been released.

UW suffered humiliating home losses to the Lobos and Warriors last season, but took possession of the Bronze Boot with a win over the Rams.

The regular-season finale at Fresno State will be at 8 p.m. on Friday, Nov. 25 (FS1). The Bulldogs won last year’s meeting at War Memorial Stadium.

Wyoming running back Titus Swen runs for a touchdown in the Cowboys' game against Utah State last season in Logan, Utah.