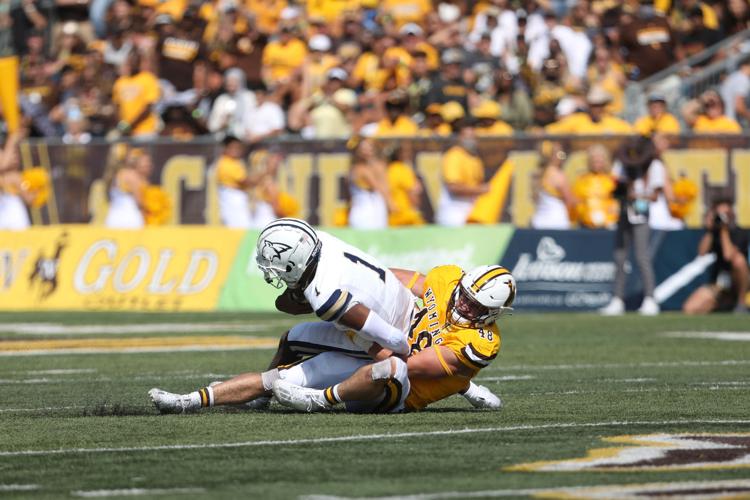 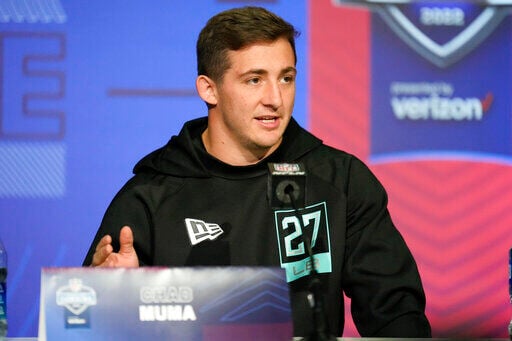 Former University of Wyoming linebacker Chad Muma speaks during a press conference at the NFL scouting combine on March 4 in Indianapolis. Muma was taken by the Jacksonville Jaguars in the third round of the NFL Draft on Friday night in Las Vegas. 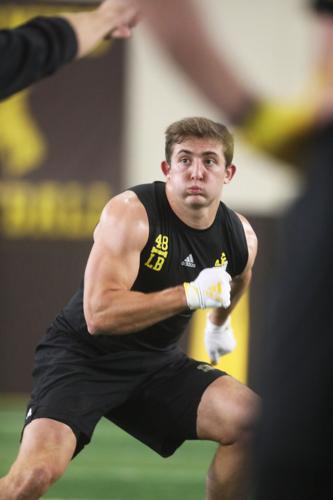 Former University of Wyoming linebacker Chad Muma works out for scouts at UW's Pro Day on March 29 at the Indoor Practice Facility in Laramie. 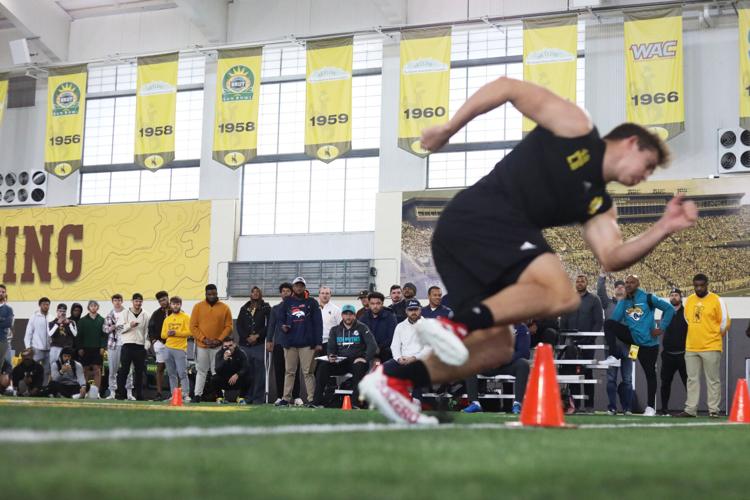 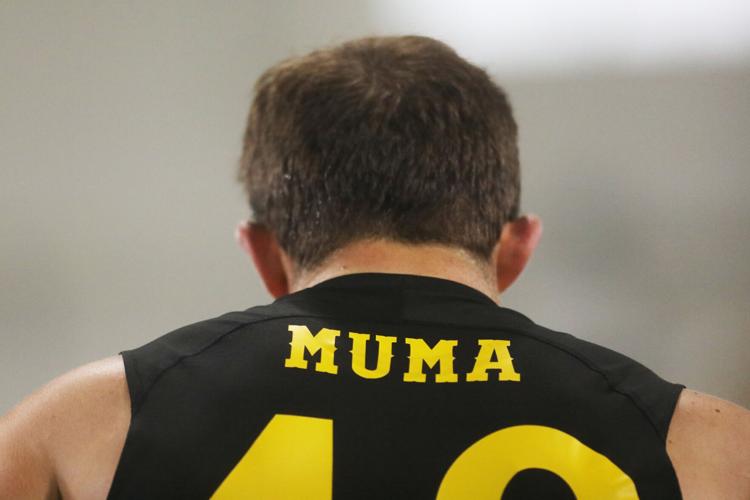 Former University of Wyoming linebacker Chad Muma rests before his next drill at UW's NFL Pro Day on March 29 at the Indoor Practice Facility in Laramie.

LARAMIE – Chad Muma will be the latest Wyoming player to ride for the brand in the NFL.

Members of the Cowboys coaching staff will attend a draft party at the star linebacker’s family home in the Denver area Friday night.

The first round of the NFL draft will be held Thursday. Muma is expected to come off the board in either the second or third round Friday.

UW led the Mountain West with 16 players on NFL rosters at the end of the 2021 season, headlined by Buffalo Bills quarterback Josh Allen and Cincinnati Bengals linebacker Logan Wilson.

“It’s another great example of a Wyoming player that has come here, has developed, that is going to be a big player on the biggest stage in football,” head coach Craig Bohl said. “So we’re going to be excited to see where Chad goes.”

Muma led all players in tackles at the Senior Bowl in January in Mobile, Alabama, performed well at the NFL Scouting Combine in February in Indianapolis and worked out again for 29 of the 32 NFL teams during UW’s pro day last month in Laramie.

The 6-foot-3, 239-pound All-American backed up his on-field production with the Pokes – Muma finished second in the FBS in tackles (142) and returned two interceptions for touchdowns last season – by recording a 40-inch vertical and running the 40-yard dash in 4.63 seconds during the draft process.

UW linebackers coach Aaron Bohl is confident Muma will succeed at the next level at middle linebacker like his college mentor, Wilson, who led the AFC champion Bengals in tackles and interceptions last season.

“He has so many traits in terms of his length and his explosiveness and his intelligence that he’s going to thrive more at the inside traditional Mike spot,” Aaron Bohl said of Muma. “But he’ll be able to still do well at the outside backer spot.”

Wilson and Cassh Maluia passed their knowledge down to Muma before getting drafted two years ago. Muma continued the tradition the last two seasons.

Easton Gibbs, who will replace Muma at middle linebacker this season after playing beside him on the weak side in 2021, was paying attention.

“He’s very about business,” Gibbs said. “Whatever he’s doing is about putting it back into the game, whether that’s watching film or being in the hotels in the road games with his pregame rituals. I really looked at the way he prepares and I’m going to try to transfer what he did.

“Mentally, Chad is a very tough guy. That’s probably the biggest thing I’m going to take from him is how to prepare for stuff and really dissect film and things like that.”

Muma racked up 266 tackles in 33 career games for the Pokes while navigating his Type 1 diabetes and finishing a degree in mechanical engineering.

Even while preparing for the NFL draft, Muma made time for UW’s linebackers this spring when he was training in Laramie.

“The last couple months I got to hang out with him a little bit and he is an A-plus dude,” walk-on freshman linebacker Nic Talich said. “He’s a great student, he’s a great linebacker and he’s great in the film room as well. Then off the field he’s even a better guy.

“I think what I take the most from him is outside of the football how much preparation you need to put into football.”

The loudest roar of the weekend could be inside the High Altitude Performance Center when Muma’s name is called on the eve of Saturday’s spring game at War Memorial Stadium.

“Muma was the kind of person that you see and aren’t like, ‘Oh, NFL guy,’” sophomore linebacker Shae Suiaunoa said. “He was just such a great guy that he was just a friend first and a football player after.

“It’s just going to be exciting for him, his family, us as friends and the Wyoming community.”

THURSDAY: The Cowboys will conduct their 14th practice of the spring before the Brown and Gold Game.

MUMA TIME: Former Wyoming linebacker Chad Muma is expected to be taken in the second or third round of the NFL draft on Friday.

Titus Swen will finally be Wyoming's featured back in 2022 after opting out of the 2020 season to support his family during the pandemic and backing up Xazavian Valladay in 2021.

Former University of Wyoming linebacker Chad Muma speaks during a press conference at the NFL scouting combine on March 4 in Indianapolis. Muma was taken by the Jacksonville Jaguars in the third round of the NFL Draft on Friday night in Las Vegas.

Former University of Wyoming linebacker Chad Muma works out for scouts at UW's Pro Day on March 29 at the Indoor Practice Facility in Laramie.

Former University of Wyoming linebacker Chad Muma rests before his next drill at UW's NFL Pro Day on March 29 at the Indoor Practice Facility in Laramie.