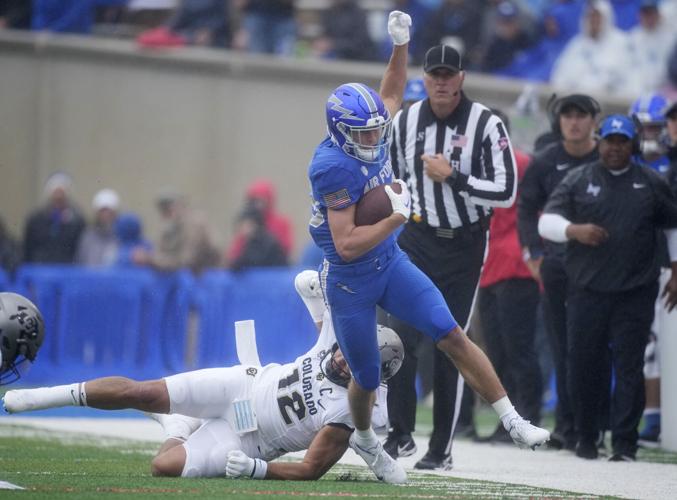 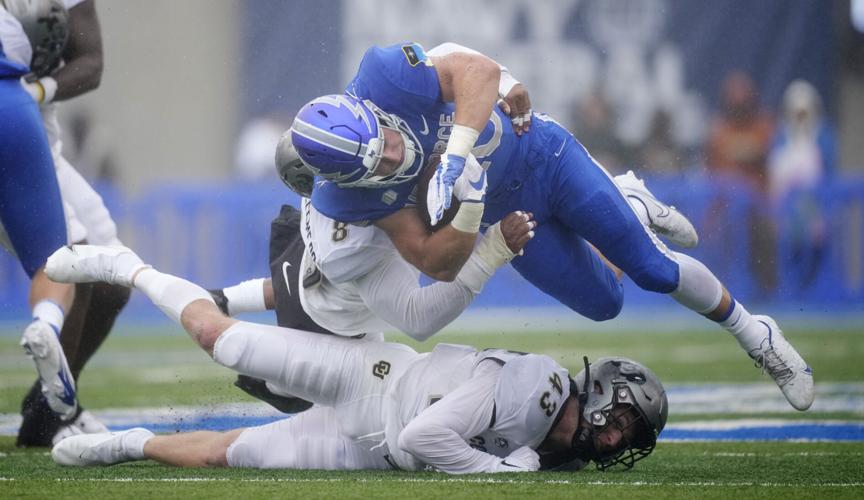 Air Force running back Brad Roberts is stopped after a short gain by Colorado linebacker Josh Chandler-Semedo and safety Trevor Woods in their game Sept. 10 at Air Force Academy, Colo. 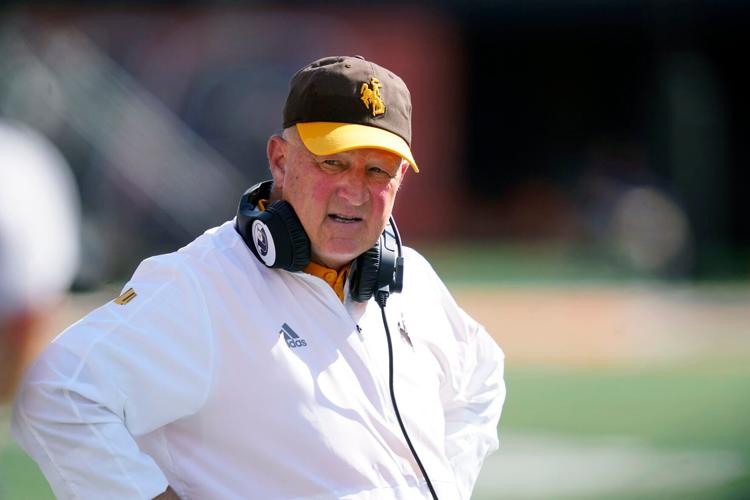 Wyoming head coach Craig Bohl looks around his team's bench during the first half of the Cowboys' game against Illinois on Aug. 27 in Champaign, Ill.

LARAMIE – Craig Bohl is noticeably calmer and gentler this season.

When asked about the youthful mistakes Wyoming has been making through three non-conference games, the program’s ninth-year head coach laughed while providing some anecdotes from last week’s 33-10 victory over Northern Colorado.

After one of the Cowboys’ touchdowns, right guard Emmanuel Pregnon casually trotted off the field and forgot about blocking for the extra point.

After his breakout three-sack performance, defensive end Oluwaseyi Omotosho asked Bohl if he could get a day off from practice to rest a sore thumb.

Instead of turning red and reading the redshirt freshmen the riot act, Bohl bit his tongue.

This is a different era with the transfer portal and UW’s leader must adapt with the times with one of the youngest rosters in the FBS.

“I love them to death,” Bohl said. “There’s some growing pains you go through as a head football coach. They’re trying hard. But if you just start looking through all of the new faces that are out there, the best way I would say it is, they’re an emerging team. They’re still going to be making some mistakes. We have to recognize there’s going to be some ups and downs. With that we’re going to have to stay the course and keep on encouraging them.

“We don’t know how the year is going to end, but I can tell you this is going to test us to the mat. But they have been a joy to coach.”

That inexperience will certainly be put to the test when the Cowboys (2-1) host Air Force in the Mountain West opener Friday at War Memorial Stadium (6 p.m., CBS Sports Network).

The Falcons (2-0) are on the cusp of cracking The Associated Press top-25 poll and look like the favorite in the MW after beating up on Colorado last week.

Air Force leads the FBS in rushing, averaging 508.5 yards per game, which is over 200 more yards per game on the ground than Minnesota (302.0 ypg), which ranks second nationally.

Fullback Brad Roberts is second in rushing (144 ypg) and bulldozed through the Buffaloes for 174 yards and three touchdowns during Air Force’s 41-10 romp during CU’s first visit to Falcon Stadium since 1974.

Haaziq Daniels has only passed for 117 yards this season, but the veteran quarterback burned the Pokes with his passing in the second half of Air Force’s 24-14 win in the 2021 MW opener.

“As a defense you have to stop the run. That’s the foundation of it all,” UW senior strong safety Miles Williams said. “Air Force, you know they’re going to try to run, run, run and then go up top every now and then. There’s nothing secret at all about what’s going to happen, it’s only a matter of alignment, assignment. We’ve been doing that pretty well so that’s nothing new for anybody.”

UW’s defense has made strides since allowing Illinois running back Chase Brown, who leads the nation in rushing (168 ypg), to get loose for 156 yards rushing with three total touchdowns in Week 0.

“Roberts is as tough a runner as I’ve seen,” Bohl said. “I know last year he and Chad Muma went nose to nose. Chad got him down but it was a real struggle. Chad may have been one of the strongest Mike linebackers we’ve had. I think he’s just a phenomenal fullback. …

“I would say their running game is like, as an old defensive coordinator they scare you to death, it’s like a hot knife going through butter. Their numbers are phenomenal.”

UW will counter the formidable Daniels-Roberts combination with Andrew Peasley and Titus Swen.

Peasley came off the bench for an injured Logan Bonner and threw three touchdown passes in the second half to rally Utah State for a 47-45 victory last season at Falcon Stadium.

The Cowboys are hoping their new quarterback’s success against Air Force will rub off on his young teammates.

After deleting his Twitter account to avoid online vitriol following the 5-for-20 passing day in the 38-6 loss at Illinois, Peasley has completed 65% of his passes for 400 yards with two touchdowns and no interceptions in the two home wins.

“We evaluate one football game and everybody wants to throw the kid in the trashcan. Then he plays alright and we want to anoint him,” Polasek said. “Right now the biggest thing for us is staying humble and hungry. We’re just not quite there where we can take a practice off or not value an opportunity to move forward.”

Swen did not start against UNC but finished strong with 75 yards rushing and three touchdowns, including two scores late in the fourth quarter to ice the game.

CU quarterback J.T. Schrout finished 5-for-21 passing for 51 yards with no touchdowns and an interception in rainy conditions at Falcon Stadium. The Buffs’ rushing attack also struggled, averaging 3.5 yards per carry for 111 net yards with one touchdown and one lost fumble at the goal line.

“We got a lot of confidence from the last two games,” Swen said. “Actually, from the last three games because we stayed in the fight (at Illinois) all 60 minutes.”

Bohl is 4-3 against Calhoun over the previous eight seasons and said this is the best team Air Force team he has prepared for since coming to UW.

The 2020 game in Laramie was canceled due to COVID-19 issues for the Falcons – the lone remaining unbeaten team in the MW – who are seeking their first win in Laramie since 2012.

The winner will have a leg up in the Mountain Division race. Reigning champion Utah State was dominated by FCS Weber State last Saturday and preseason favorite Boise State must play Air Force and UW on the road.

“I think it’s a statement game for us for sure,” Cowboys middle linebacker Easton Gibbs said. “They’re riding high, it’s the first conference game, and conference games are always important. We’re really excited to just get after it. It’s a big game and it’s a rivalry game. Can’t beat it.”

GROUND ATTACK: The Falcons lead the FBS in rushing, averaging 508.5 yards per game.

HE SAID IT: “We don’t know how the year is going to end, but I can tell you this is going to test us to the mat." -- UW head coach Craig Bohl.

Wyoming QB Andrew Peasley, who led Utah State to a key win at Air Force on the road to the Mountain West championship, will try to beat the Falcons again at War Memorial Stadium.

Wyoming running back Titus Swen, who finished with 75 yards and three touchdowns against Northern Colorado, said his bruised ribs are getting better.

Pokes in the Pros: Josh Allen accounted for four touchdowns in the Buffalo Bills' victory over the Los Angeles Rams.

Wyoming will be facing the nation's best rushing team and perhaps the Mountain West favorite when Air Force arrives under the Friday night lights at War Memorial Stadium.

Air Force running back Brad Roberts is stopped after a short gain by Colorado linebacker Josh Chandler-Semedo and safety Trevor Woods in their game Sept. 10 at Air Force Academy, Colo.

Wyoming head coach Craig Bohl looks around his team's bench during the first half of the Cowboys' game against Illinois on Aug. 27 in Champaign, Ill.