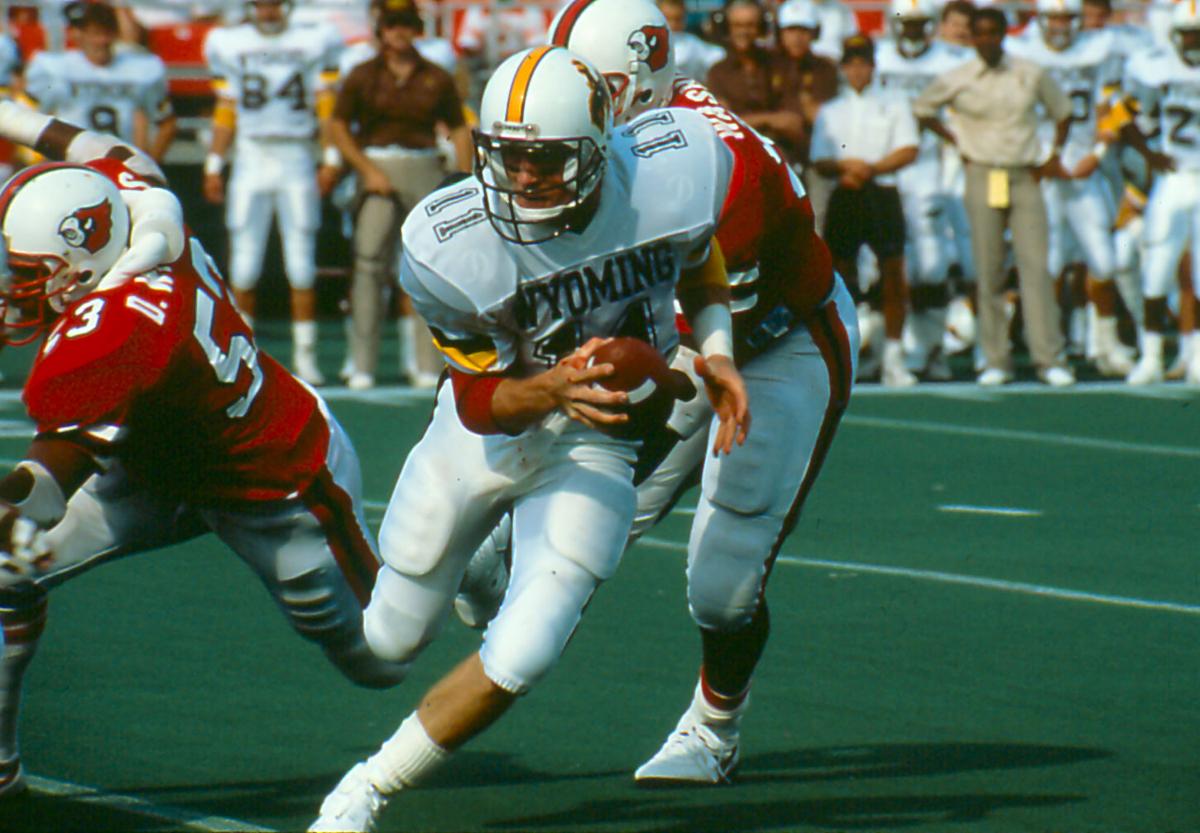 Former Wyoming quarterback Randy Welniak runs for yardage in the Cowboys' game against Louisville on Sept. 10, 1988 at Cardinal Stadium in Louisville, Ky. 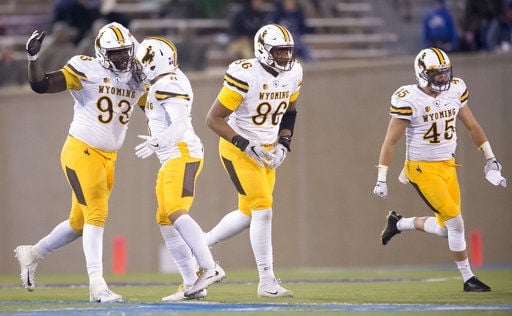 Wyoming defenders celebrate after they held Air Force on fourth down in their game on Nov. 11, 2017 at Falcon Stadium in Air Force Academy, Colo. 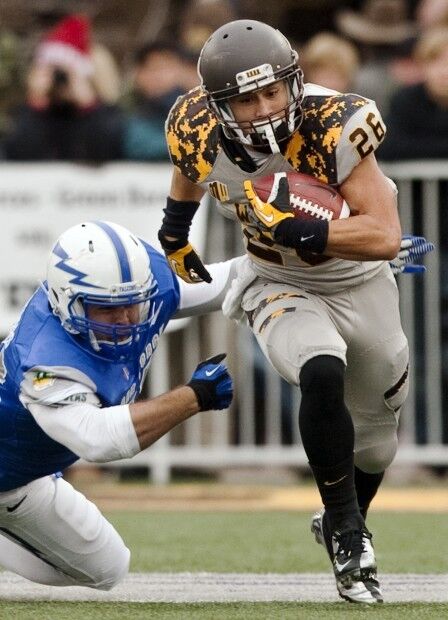 Wyoming running back Shaun Wick breaks away from an Air Force defender in the Cowboys' game against the Falcons on Oct. 13, 2012 at War Memorial Stadium in Laramie. 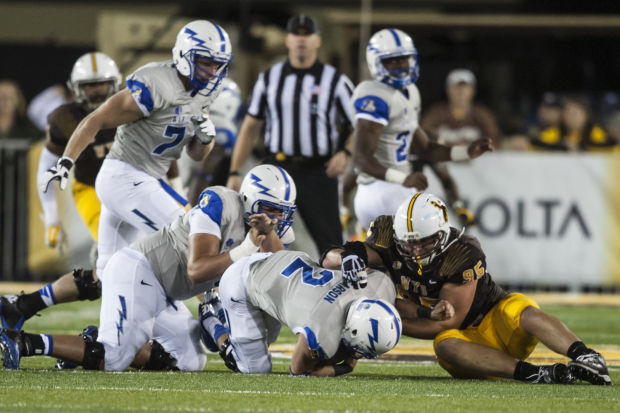 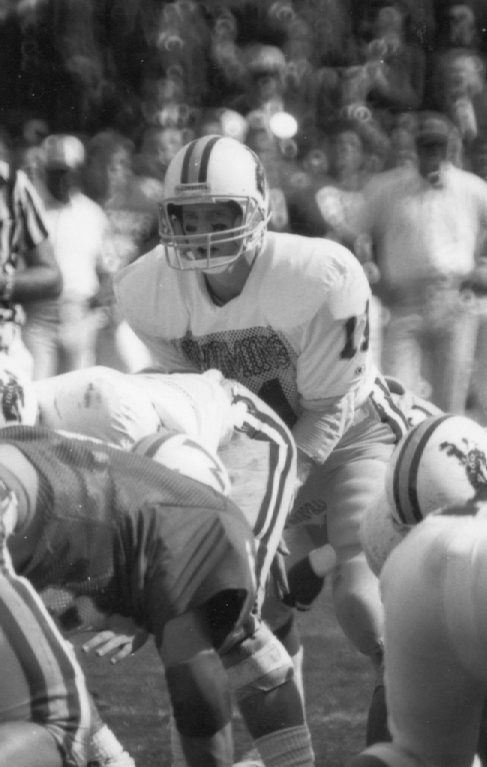 But last week the Falcons strongly considered leaving the nest they helped build two decades ago to join the American Athletic Conference.

Trips to Greensville, North Carolina, and Philadelphia and Tampa, Florida, wouldn’t bother Air Force, but the extra travel costs and loss of regional rivals were not worth a few extra television dollars to Boise State, Colorado State and San Diego State.

The decision by the four schools to rebuff the AAC’s courtship and remain in the MWC during Wyoming’s bye week was met with a collective sigh of relief in Laramie.

UW, which lost longtime rivals BYU and Utah during the last round of realignment, enjoys a highly competitive series with the Falcons and circles the Border War with the Rams on the schedule every season.

“We’ve been in our own foxhole, but I can tell you the Mountain West is an excellent conference,” UW head coach Craig Bohl said when asked about Air Force and CSU considering leaving one Group of 5 conference for another. “It is a conference that has challenged me personally, and I’ve coached in about every single one of them. We’re all excited about the 12 members we have.

“While (against) Colorado State we’re playing for the (Bronze) Boot, the Air Force game as players and coaches is a game we always look forward to. They’ve been hard-fought games, and we’re anticipating one this coming Saturday.”

The teams played to a 7-all tie during the first matchup in 1957 and neither side has gained much separation since.

Air Force’s cancellation of the 2020 game at War Memorial Stadium due to COVID-19 issues within its program ended a streak of 40 consecutive seasons playing UW.

“I had hoped that cooler heads would prevail,” longtime UW sports information director and associate athletic director Kevin McKinney, who retired from most of his duties but still does color for the radio broadcast, said of the reports Air Force and CSU were nearing a deal to join the AAC. “I’ve been around long enough of course to see teams leave for greener pastures than that.”

Two years later, Air Force joined the WAC. After the conference had ballooned to 16 members, Air Force, BYU, CSU, Utah and Wyoming decided to leave together in 1999 to form the MWC, inviting New Mexico, San Diego State and UNLV to join the split.

The Falcons have a 20-19 edge all-time in conference games against the Pokes. UW will try to even the ledger Saturday.

“This is a huge game for us to every single year,” said linebacker Chad Muma, who is from Lone Tree, Colorado. “I think that everyone kind of goes into this game with a little chip on their shoulder. We're all excited to play Air Force, because at the end of the day it is also a rivalry.

“It may not be as big as the boot, but it's kind of like an extended Border War. So we're all looking forward to it.”

Comeback for the ages

Randy Welniak will always be remembered for playing a leading role in one of the greatest games in program history – UW’s 48-45 victory at Air Force on Sept. 24, 1988.

Current Air Force head coach Troy Calhoun, who won’t concede this is a rivalry game, was on the opposite sideline that afternoon.

“I talked to him one time about it,” Welniak said. “Dee Dowis was the starting QB at that time and Troy was part of that team as well. He tries to forget it, and I love to bring it up.”

Air Force, led by the spectacular Dowis, erupted for four touchdowns in the third quarter to take a 38-17 lead going into the fourth quarter.

Welniak led the visitors on a comeback that makes this year’s Cardiac Cowboys seem boring – passing for 359 yards and three touchdowns and rushing for 108 yards and another score.

After 21 unanswered points by UW, Dowis ran for a 61-yard touchdown to give the Falcons a 45-38 lead with 2:42 remaining. The Pokes answered with a clutch drive capped with a 9-yard touchdown run by Steve Bana.

Welniak completed a 14-yard pass to Freddy Dussett, ran for 10 yards on a quarterback keeper, and Dabby Dawson scampered down to the 10-yard line to set up Sean Flemming’s 27-yard game-winning field goal with 1 second left on the clock.

“When you feel that momentum shift and it starts going in your direction, you truly believe you're going to win,” Welniak said 33 years later. “You just get that confidence back in your mind, knowing that your teammates are going to do what we've been training and practicing to do. … I didn't really realize what had happened until reflecting back on the game and going, ‘Oh my God, I can't believe we were down by 21 and we ended up scoring 31 points in the fourth quarter to win the game.’

“Pretty amazing. We were very fortunate to have an incredible coaching staff, and some outstanding athletes on our team.”

The Cowboys improved to 2-0 on the way to a 10-0 start. UW won its second consecutive WAC championship under Paul Roach and finished 11-2 following a lopsided loss to Barry Sanders-led Oklahoma State in the Holiday Bowl.

The rousing victory over Air Force, which finished 5-7 overall and 3-5 in the WAC, was the signature performance of the historic season.

“That would be one of the most phenomenal games I've ever seen,” McKinney said. “Things went so badly for so long in that game. I just didn’t see how Wyoming was going to win the game. That was just remarkable. What can you say? I don’t know how you can have a much better comeback than that.”

Recalling some other classics

The 1988 win is clearly the greatest game in the series from a UW perspective, but there have been many other memorable moments over the decades.

Lloyd Eaton led the Cowboys to back-to-back 10-1 seasons in 1966 and 1967, which were capped with trips to the Sun Bowl (defeated Florida State) and Sugar Bowl (lost to LSU), respectively.

In 1969, Eaton may have had his best roster, and the Cowboys opened the campaign with a 23-7 victory over Arizona in Laramie. The next week, the Pokes headed down to the Academy and escaped with a 27-25 victory over the Falcons.

“I recall vividly that everyone was saying, ‘If we can just get by the Air Force game, we can have a heck of a year,’” McKinney said. “The irony of that thing is they were a pass-happy team and threw for 388 and rushed for minus-32 yards in that game. We had a bunch of sacks.”

One of Eaton’s standout defensive players, Tony McGee, brought the quarterback down seven times behind the line of scrimmage. UW started officially keeping sacks as a statistic in 1980 with Dave Edeen setting the single-game record with five against BYU in 1988.

After the win over Air Force, the Pokes were No. 19 in The Associated Press poll. They blew out CSU (39-3) and Texas-El Paso (37-9) the next two Saturdays in Laramie.

Then Eaton kicked McGee and the other members of the Black 14 off the team when they asked for permission to wear black armbands against BYU to protest Mormon Church policies they viewed as racist.

The Cowboys defeated BYU and San Jose State after Eaton’s program-changing decision, but dropped the final four games of the season and finished 1-9, including a 41-17 home loss to the Falcons, during Eaton’s final season in 1970.

“That was going to be one of our very best years,” McKinney said. “It was a heck of a game down there at Air Force. Just huge win.”

UW’s next winning season was in 1976 when Fred Akers guided the program to an 8-3 finish during the regular season before leaving for Texas abruptly ahead of the Cowboys’ 41-7 loss to Oklahoma in the Fiesta Bowl. Akers’ final game at UW was a 41-21 loss at Air Force.

Joe Tiller’s 1996 Pokes finished 10-2 and won their half of the WAC. The most memorable game from the run was the 25-24 victory at CSU, which was capped with UW’s version of the drive as Josh Wallwork and Marcus Harris had their way with the Rams at Hughes Stadium.

But the Cowboys also escaped with a 22-19 win against Air Force early in the season. Wallwork finished with 453 yards passing and Cory Wedel kicked the game-winning field goal with 36 seconds remaining.

“I don’t remember that game,” McKinney admitted. “I can tell you everything about the CSU comeback.”

The 2012 game will forever be remembered for what happened after Air Force backup quarterback Kale Pearson scored on the only snap he took to deliver a 28-27 victory over the Cowboys at War Memorial Stadium.

Christensen was suspended for one game and fined $50,000 for a postgame tirade that included calling his counterpart “Mister (expletive) Howdy Doody.”

In the 2013 rematch at the Academy, Brett Smith – who missed the previous meeting with an injury – passed for 373 yards and four touchdowns and rushed for 138 yards and one touchdown to lead the Cowboys to a 56-23 romp that ended with a Gatorade bath for Christensen.

“With the heartbreaking loss last year, I know he wanted to come out and win this game," Smith said of Christensen after his 511 total yards broke the school record of 482 set by Wallwork against Idaho in 1996. “And I think it not only meant a lot to him but it meant a lot to everybody.”

Christensen was fired after a 5-7 finish. In five seasons at UW, he posted a 4-1 record in the Border War but was 2-3 against Calhoun and the Falcons.

Bohl’s first MWC victory was a 17-13 win over the Falcons in 2014. Entering Saturday’s game, the Cowboys are 4-3 against CSU and 4-2 against Air Force under his watch.

In 2017, the Pokes prevailed 28-14 at Falcon Stadium, but an injury to Josh Allen that night would derail UW’s MWC title chase.

In 2018, Sean Chambers was knocked out of the game in the first quarter, but Tyler Vander Waal led a mini-1988 comeback – the Cowboys trailed 27-14 with 8:44 remaining before scoring 21 fourth-quarter points to win 35-27 – to stun Air Force on a snowy night in Laramie.

Now the programs will start a new streak of games following last year’s cancellation with both programs committed to the MWC for the time being.

“We don’t like them. They don’t like us,” UW safety Rome Weber said of the rivalry. “We’ve just got to go out there and win.”

Linebacker is looking to make some big plays against the Falcons after a relatively quiet game at UConn.

Former Wyoming quarterback Randy Welniak runs for yardage in the Cowboys' game against Louisville on Sept. 10, 1988 at Cardinal Stadium in Louisville, Ky.

Wyoming defenders celebrate after they held Air Force on fourth down in their game on Nov. 11, 2017 at Falcon Stadium in Air Force Academy, Colo.

Wyoming running back Shaun Wick breaks away from an Air Force defender in the Cowboys' game against the Falcons on Oct. 13, 2012 at War Memorial Stadium in Laramie.