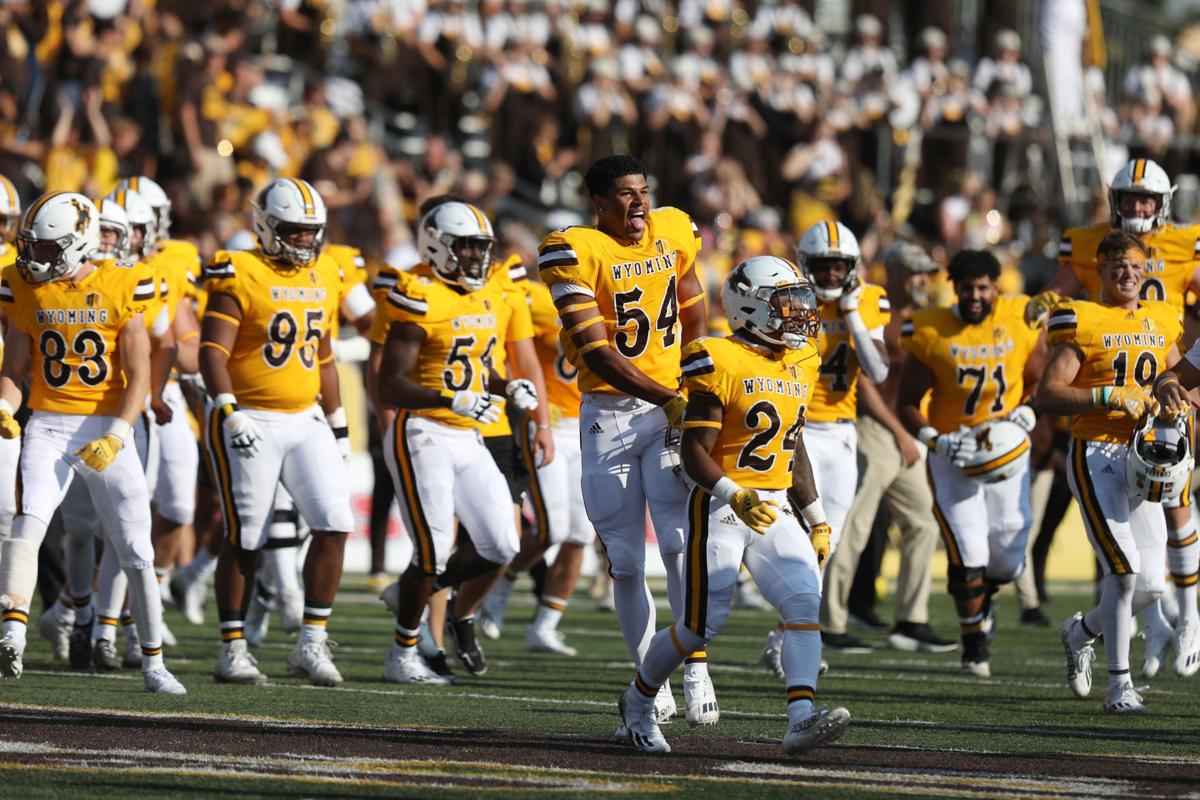 Wyoming players rush the field in celebration after defeating Montana State on Saturday at War Memorial Stadium in Laramie. 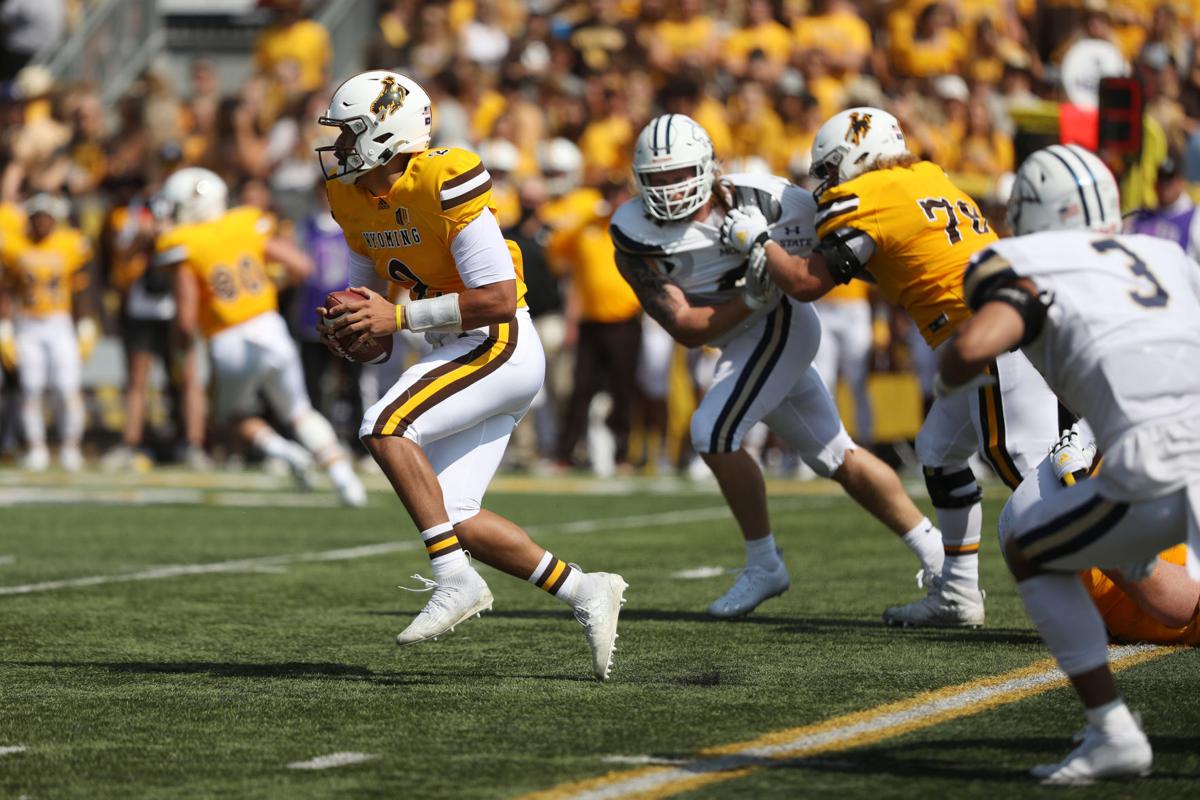 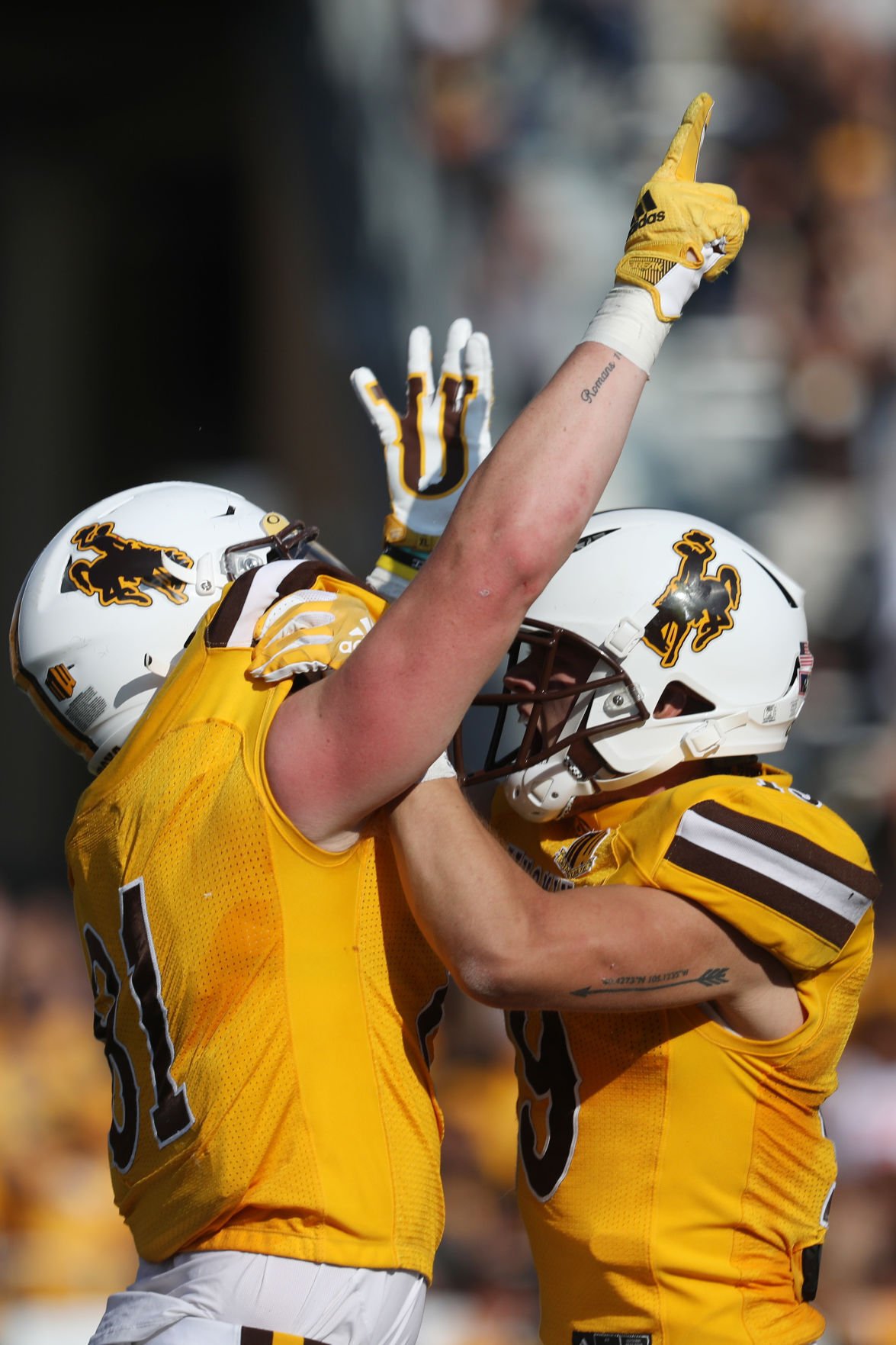 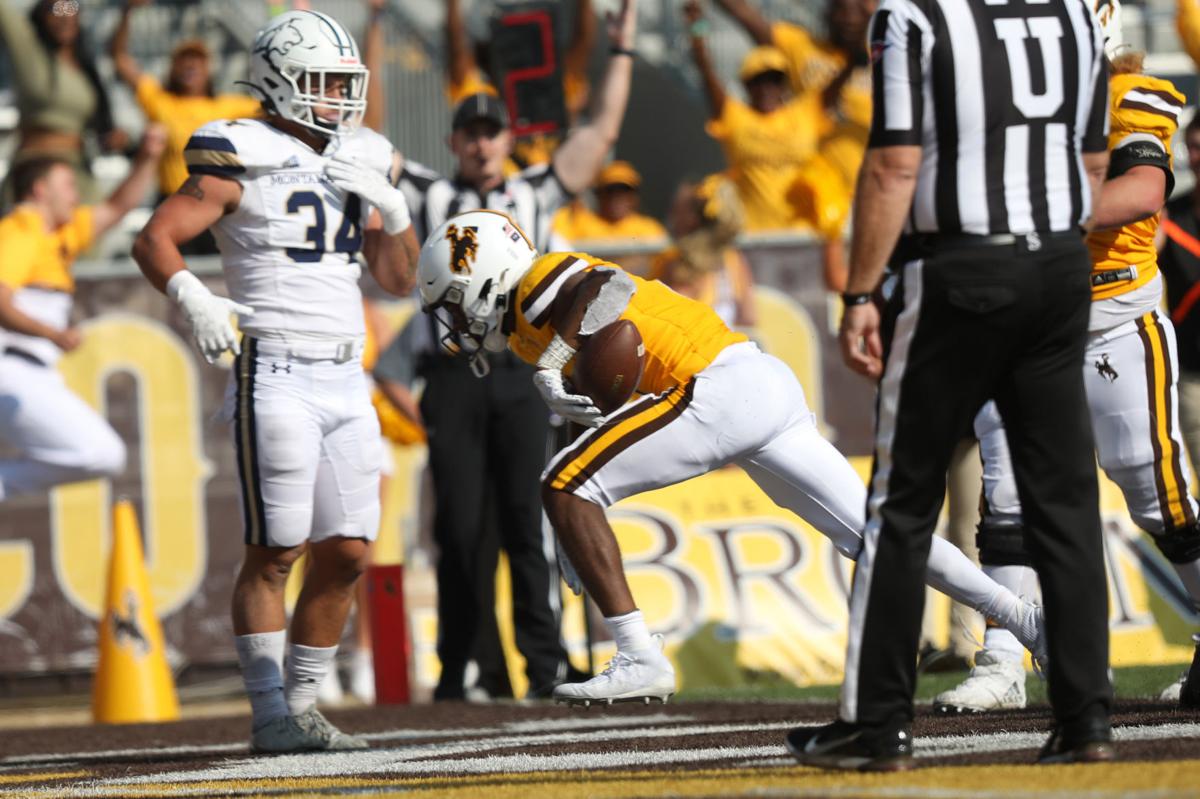 Wyoming's Xazavian Valladay score a touchdown in the fourth quarter of the Cowboys' victory over Montana State on Saturday at War Memorial Stadium in Laramie.

Sean Chambers refused to succumb to the recurring nightmare and delivered a memorable victory to start the Cowboys’ next chapter.

After the offense sputtered for three quarters, much as it did throughout last year’s dreadful 2-4 finish, Chambers came through in the clutch by leading two fourth-quarter scoring drives.

UW’s 19-16 victory over Montana State may not be worthy of a spot in the Louvre, but the final drive was a masterpiece for Chambers that finally gave the crowd of 20,007 something to cheer about at War Memorial Stadium.

“I wasn’t nervous. I don’t even know how to describe it,” said Chambers, who suffered a season-ending injury on the third play of last year’s opener at Nevada. “I felt like this was after the 2019 season. This was the next season and it was like 2020 didn’t happen. It was weird. ...

“It was emotional today. I can’t find the words right now for it.”

Brent Vigen almost slipped out of town with an upset victory at Craig Bohl’s expense.

The Bobcats (0-1) were in control for most of the game but were unable to give Vigen, UW’s former offensive coordinator, a signature win in his debut as Montana State’s head coach.

A relieved Bohl rushed out on the field to hug his counterpart after time ran out on the visitors’ bid to get in position for a game-tying field goal.

“He’s a heck of a person and he’s going to be a great head coach. Today demonstrated out how he prepared that football team.”

And when Chambers missed a wide open Alex Brown down the sideline for what would have been an easy touchdown in the third quarter, the audible gasps from the crowd seemed to suggest it might be the Bobcats’ day to pull off an FCS-over-FBS upset.

Montana State returned the ensuing punt for a touchdown, but a block in the back penalty nullified the score and pinned the visitors back at their own 8-yard line.

That swing opened the door for a UW comeback.

Chambers delivered a strike to Ayden Eberhardt for a 22-yard gain to get the Cowboys in the red zone, and pass-interference and taunting penalties against Montana State defensive end Daniel Hardy moved the chains on a third-and-9.

Xazavian Valladay gave UW its first lead of the season, 9-7, on a 2-yard run with 13:36 remaining. The extra point was botched after a bad snap.

“Sean, in all the situations we’ve been having in fall camp, the confidence has been building up and he’s leading us in the right direction,” Valladay said. “We do have a lot of work to do and we need to get in the film room. But it starts with our quarterback and the confidence he has in leading this offense.”

Isaiah Ifanse broke off a pair of 21-yard runs to get freshman Blake Glessner close enough to make a 53-yard field goal that gave the Bobcats a 10-9 lead with 10:23 remaining.

The Cowboys answered with Chambers finding Alex Brown for seven yards to convert a third-and-4, Valladay breaking through the line for three yards on fourth-and-1 and Eberhardt hauling in a 39-yard reception to set up a first-and-goal.

The unflappable Bobcats calmly went on a 6-play, 75-yard drive that included a facemask penalty against the Cowboys, a 30-yard reception by Lance McCutcheon and a 1-yard touchdown grab by Treyton Pickering to make the score 16-12 with 2:17 on the clock.

The moment Chambers has been waiting nearly two years for had arrived.

“I’m kind of getting goose bumps right now talking about it. Confident,” Eberhardt said when asked about Chambers’ demeanor in the huddle before the final drive. “We replicated that scenario so many times before leading up to this exact moment. So everyone was confident going into it.”

Chambers started the sequence with an 8-yard run and then threw a 24-yard strike to Joshua Cobbs, one of the eight different players he completed a pass to.

Before the game-winner, which came on a third-and-4, Welch had a feeling his Chambers would be targeting him to be the hero of the day.

“It’s a play that we’ve really been focusing on,” Welch said. “Before the play, I think Sean and I both knew I was going to be the first read on that. It was racing through my head for sure.”

Chambers and the Cowboys (1-0) saved their best for last. It’s a start.

PHOTOS: Pokes return to War Memorial Stadium with a 19-16 win over Montana

Pokes will be looking to make improvements before road trip to Northern Illinois.

Sophomore delivers as next cornerback up after starter Azizi Hearn was ejected in first quarter against Montana State.

A night to remember: Rewinding Cowboys' 2016 classic vs. Northern Illinois

Looking back at Wyoming's weather-delayed, three-OT thriller against Northern Illinois in 2016.

Wyoming players rush the field in celebration after defeating Montana State on Saturday at War Memorial Stadium in Laramie.

Wyoming's Xazavian Valladay score a touchdown in the fourth quarter of the Cowboys' victory over Montana State on Saturday at War Memorial Stadium in Laramie.