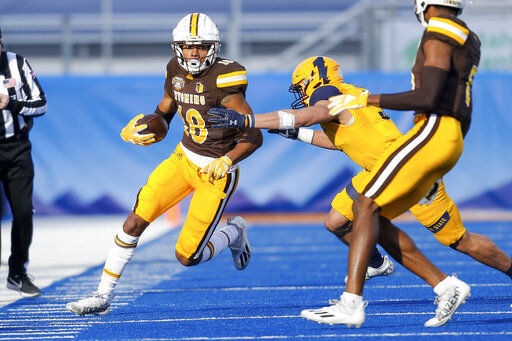 Wyoming wide receiver Joshua Cobbs turns up the sidelines after a reception as Kent State safety Dean Clark pushes him out of bounds during the Famous Idaho Potato Bowl on Dec. 21, 2021 in Boise, Idaho. 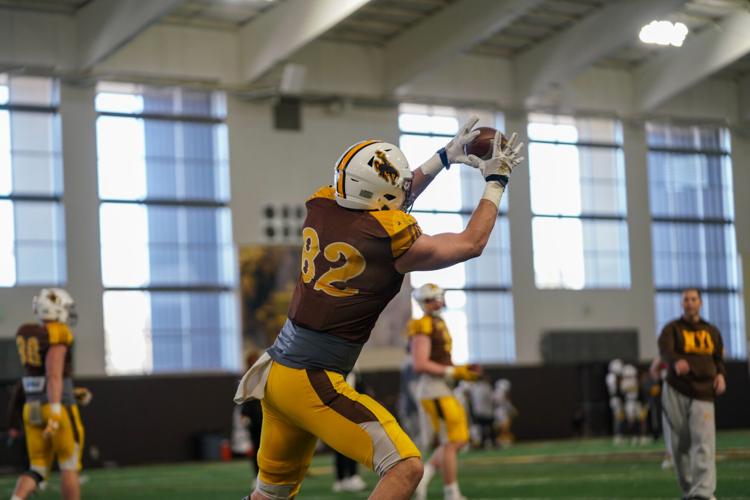 University of Wyoming tight end Jackson Marcotte catches a pass during spring camp on April 8 at the Indoor Practice Facility in Laramie. 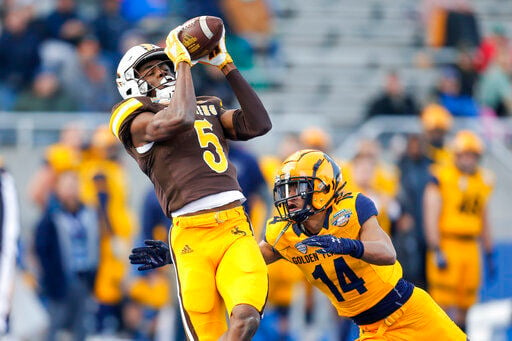 LARAMIE – It didn’t take Isaiah Neyor long to feel back at home again in his native Texas.

The former Wyoming wide receiver was a blur of burnt orange in the highlight reel during a 63-yard touchdown reception in the Longhorns’ spring game.

Now the Cowboys are left to wonder who will make the big plays for them in the passing game this fall.

UW is attempting to replace the dynamic Neyor – who led the team with 44 receptions for 878 yards (20.0 yards per catch) and 12 touchdowns before entering the portal – by committee.

During the Brown and Gold game, Joshua Cobbs had a team-high six receptions for 58 yards (9.7 ypc).

The 6-foot-4 sophomore from San Antonio, Texas, is expected to be the new No. 1 receiver after finishing second on the team with 25 receptions for 245 yards (9.8 ypc) and a touchdown playing in Neyor’s shadow last season.

“He has done a really good job in the room talking to the kids, being more vocal as a leader. He has always been a guy that really wants to do well,” wide receivers coach Mike Grant said of Cobbs. “I don’t have to say anything because he’s really hard on himself. He wants to do great things. So I have to even tone him down and say, ‘OK, we’ve got another play if something goes wrong with the first one.’ He has always had that effort and motivation and it shows now.”

Wyatt Wieland is in position to win the other starting spot after flashing with a couple clutch third-down catches late in the 2021 season after Ayden Eberhardt suffered a serious knee injury.

During the 2020 season, Wieland’s development was halted by a “pretty bad groin injury” that took about nine months to recover from before he felt comfortable running again. The 6-1 junior from Colorado Springs had four receptions for 60 yards last season and two receptions for 20 yards in the spring game.

“I felt horrible for Ayden. It was the worst thing that could have happened, but it did open up some opportunities for me, so I tried to make the most of it,” Wieland said. “He was one of the first dudes when I came in that took me under his wing. He had already been here for a few years, and we played against each other back in high school. He was one of the biggest guys in my development here, just always telling me how to do this without being mean about it.

“I owe the world to Ayden for that. He was just one of the best senior leaders that has been here.”

Wieland made a point to help lead the Cowboys through winter workouts after the program lost several key seniors to graduation and a list of talented players to the portal. He plans to fill the role Eberhardt, who had 21 receptions for 298 yards in eight games, had in 2021.

“It’s definitely a little bit of a different dynamic. The two dudes that we got the ball to the most are gone,” Wieland said. “But I’m really comfortable with the receivers we have now and where we’re at.”

Jaylen Sargent, who played well during fall camp but redshirted as a true freshman, is now wearing Neyor’s No. 5 jersey and caught a 35-yard touchdown in the spring game.

Alex Brown and Tyrese Grant are also competing for playing time at receiver.

“It has been a real pleasant surprise to me, their effort and hard work. I think they’ve come together,” Mike Grant said. “You don’t really see a lot of guys being selfish, and they’re working a lot harder than they have in the past in the run game and trying to dominate the perimeter, as well as finishing after catches. Those are the things we emphasized.

“If you’re not as talented or super-duper talented, it’s still going to come down to your fundamentals.”

Neyor was a rare talent, but in UW’s run-first offense he only averaged 3.4 catches per game. Mike Grant is confident the receiver room can collectively overcome the star’s departure to the Big 12.

Head coach Craig Bohl describes Gunner Gentry, who has not played the past two seasons due to injury, as the “X factor” in the equation. The 6-3 redshirt junior, who led the team averaging 21.7 yards per catch in 2019, will be cleared to begin working out with teammates this summer.

“Before he was injured there was some spark there. The light was coming on for him,” Mike Grant said of Gentry, the younger brother of former UW standout and current Buffalo Bills receiver Tanner Gentry. “If he can just get back to that form he can really add to that group there.”

This could also be the fall when the tight ends finally have their numbers called consistently in the passing game.

“Honestly, it’s just about developing as a group,” Marcotte said. “We’ve got a lot of experienced guys now that understand the offense. When that happens then we’re able to put a lot more on the tight ends and that opens up a lot in the passing playbook. Not that we haven’t been an option in the past, but there’s just more of an emphasis because when you understand coverages more that means you’re going to get more open.”

The addition of Utah State transfer quarterback Andrew Peasley should improve the Pokes’ efficiency in the passing game, even if Titus Swen and the run game remain the focal point.

“I’m excited about coaching these guys,” said Mike Grant, who also holds the titles of associate head coach and passing game coordinator. “We’re younger and the portal has made us that way, but I’m excited with what’s at stake and what we have the opportunity to do.”

Wyoming wide receiver Joshua Cobbs turns up the sidelines after a reception as Kent State safety Dean Clark pushes him out of bounds during the Famous Idaho Potato Bowl on Dec. 21, 2021 in Boise, Idaho.

University of Wyoming tight end Jackson Marcotte catches a pass during spring camp on April 8 at the Indoor Practice Facility in Laramie.