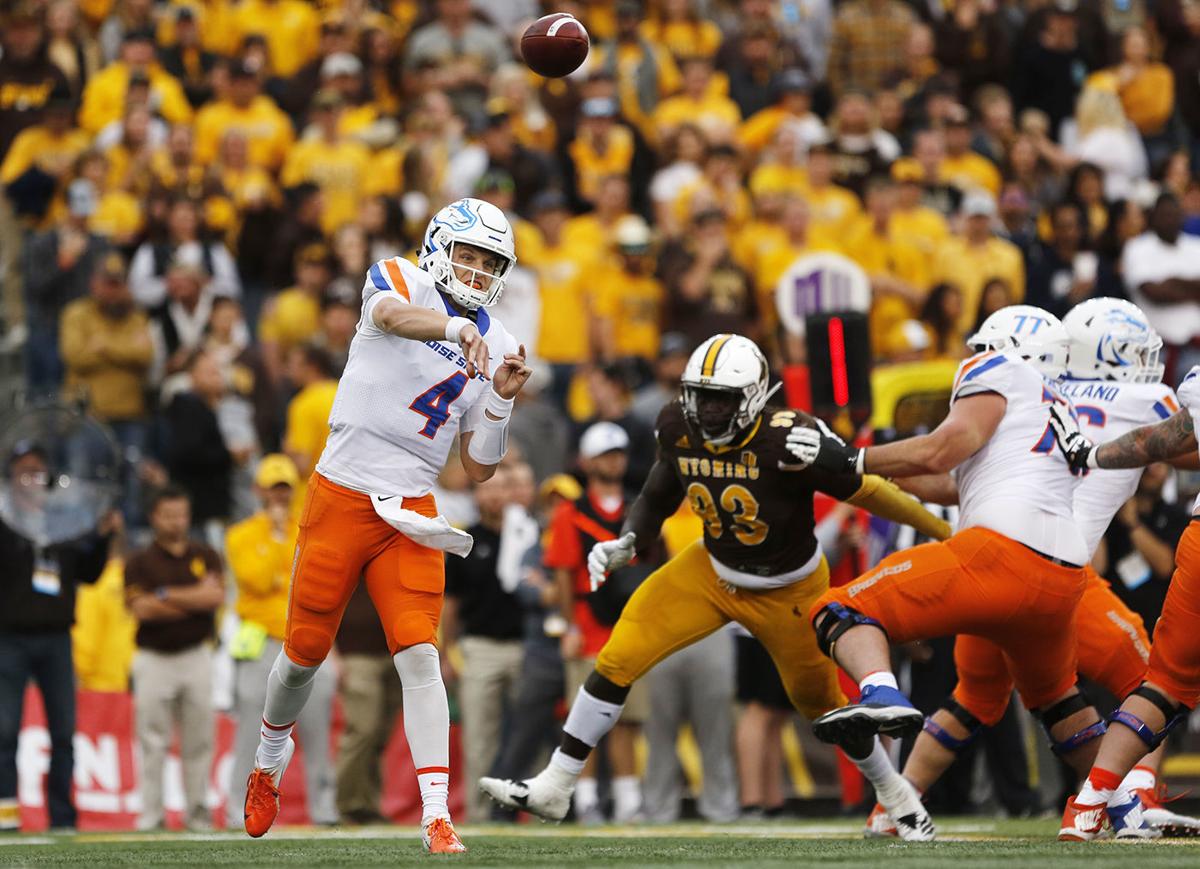 Boise State quarterback Brett Rypien throws a pass during the Broncos' game against Wyoming on Saturday at War Memorial Stadium in Laramie. 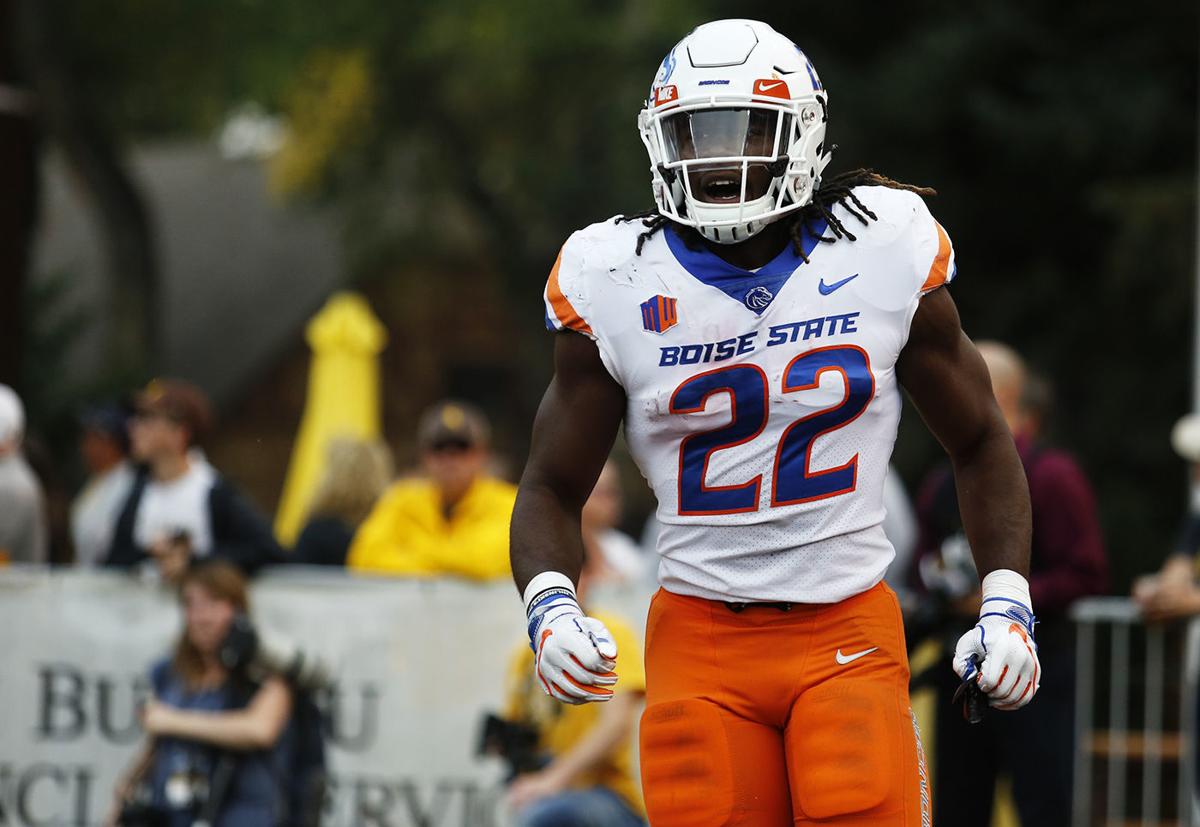 Boise State's Alexander Mattison reacts after scoring his team's first touchdown in the Broncos' game against Wyoming on Saturday at War Memorial Stadium in Laramie. 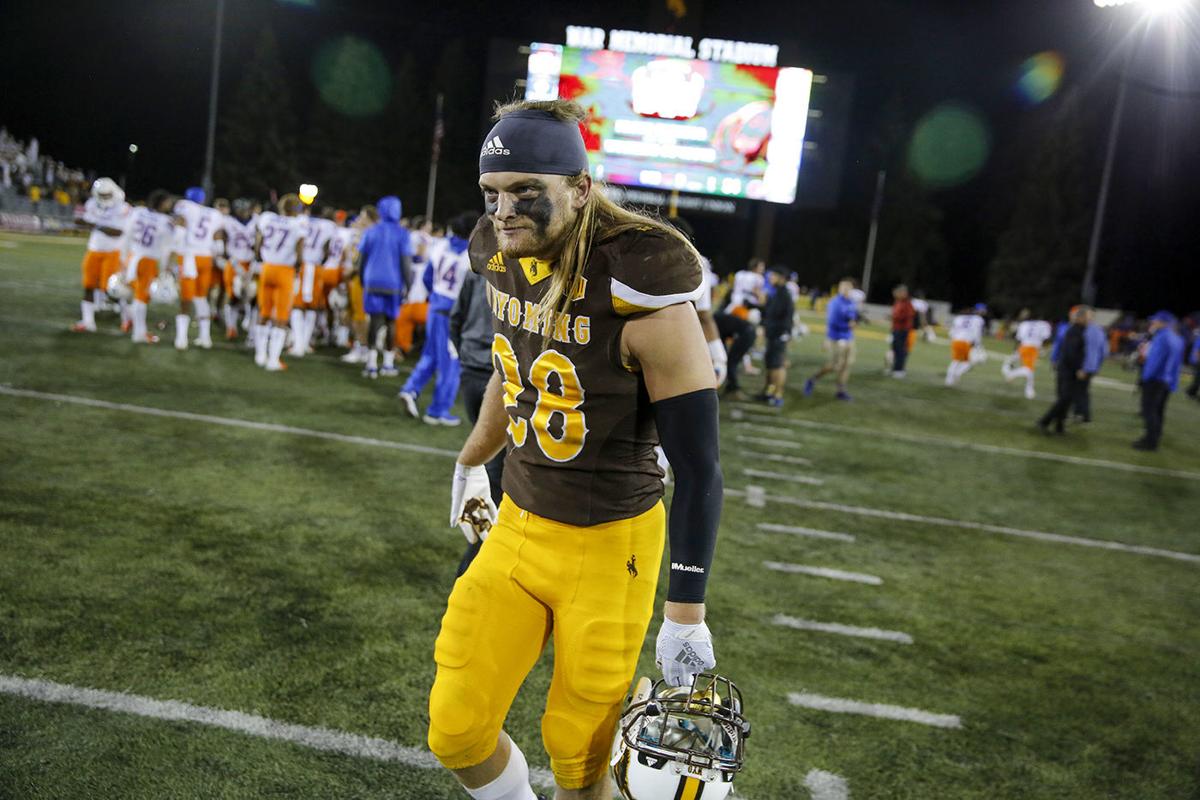 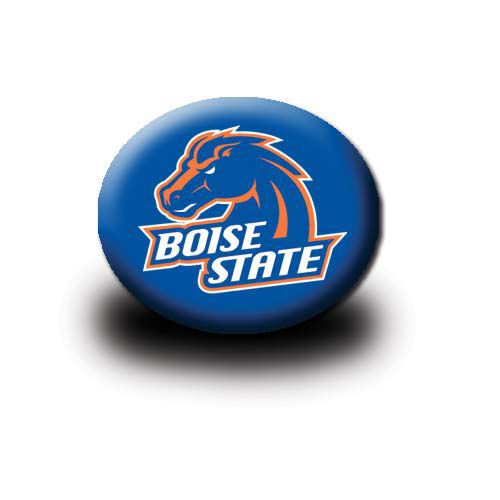 LARAMIE -- Wyoming coach Craig Bohl and his players talked throughout the week about how the Cowboys’ Mountain West Conference opener would give them a good idea of where they stood among the league’s elite.

Based on how it went, Wyoming has a lot of work to do.

Wyoming didn't measure up in any phase against the favorite to win the Mountain West on Saturday. Boise State (3-1, 1-0 MW) set the tone for a 34-14 rout by scoring on four of its first six possessions, held Wyoming to its lowest yardage output in a half all season and used a pair of special-teams gaffes by the Cowboys (2-3, 0-1 MW) to quickly take control.

A game that was supposed to be a measuring stick turned into a dud in front of 22,271 fans at War Memorial Stadium. The Cowboys not only suffered a loss in a Mountain West opener for the first time since 2015 but were handed their worst conference setback since a 56-35 loss at New Mexico two years ago.

“There’s just a lot of things we needed to do better, and we didn’t,” Bohl said. “Some of it is some self-inflicted mistakes on our part, but I also think that’s a really good football team we played. They were ready to go tonight.”

Wyoming trailed 24-0 at the half and was down by as many as 27 in the second half before Tyler Vander Waal connected with James Price for a 72-yard catch-and-run score, a career-long catch for the senior receiver that doubled as the Cowboys' longest pass play of the season.

The Cowboys grabbed some momentum on the first play of the second half when Nico Evans, who ran for 141 yards on just 12 carries in his first game back from bruised ribs that kept him out of game action for nearly a month, took the handoff and gashed the Boise defense for a 75-yard touchdown. It was the Cowboys' longest run of the season.

“I don’t like losing,” Evans said. “We needed something big. We told the offense we need to start off fast in the second half. I got the ball, saw daylight and just hit it.”

The Cowboys had a chance to keep that momentum going on Boise State's next possession, one that reached Wyoming's 35-yard line after the Broncos started the possession 4 of 4 on third down. Safety Marcus Epps cut in front of Brett Rypien's pass intended for Sean Modster, but dropped what would've been an interception inside the 10. Instead, the Broncos pushed their lead to 27-7 six plays later on Haden Hoggarth’s 33-yard field goal.

“We had a couple of opportunities for some interceptions tonight,” Bohl said. “Now they would’ve been some special plays, but we didn’t make any of those.”

It may not have mattered considering Wyoming’s offense was non-existent outside of its two scoring plays, mustering just 148 yards on their other 48 snaps. With Boise able to pin its collective ears back with such a large lead against a Wyoming offensive line that had to juggle its pieces -- left guard Keegan Cryder slid over to center for the injured Patrick Arnold while freshman Eric Abojei took over Cryder’s place -- the Broncos applied constant pressure and racked up seven sacks of Vander Waal, who went 15 of 25 for 215 yards.

“We certainly put blood in the water,” Bohl said.

Boise’s offense, on the other hand, didn’t have much trouble moving the ball, particularly in the first half with all but two of its scoring drives coming in the first two quarters. Rypien looked every bit like the NCAA’s active leader in passing yards and completions, finishing 28 of 42 for 342 yards and a pair of scores. Modster and A.J. Richardson were his most popular targets on a night when the senior completed passes to 10 different receivers. Richardson had a game-high 113 receiving yards, including a 21-yard score, while Modster had a game-high seven receptions for 88 yards.

The Broncos ran 89 plays and dominated time of possession, controlling the ball for 40 minutes, 13 seconds by keeping drive after drive alive on third down. Boise State finished 11 of 20 on third downs while Wyoming was just 2 of 11 in that category.

“We couldn’t get off the field on third down, and then there were a lot of things (we did) ourselves that helped them convert on third downs,” said linebacker Logan Wilson, whose taunting penalty helped keep an opening drive alive for Boise that ended in a touchdown. “That killed us.”

Wyoming’s punting game didn’t help matters. Tim Zaleski dropped the ball on one attempt and had another punt blocked, the latter of which led to a field goal that gave Boise a 24-point halftime lead the Cowboys never recovered from.

“If you go against a good team like Boise, you can’t start slow,” Evans said. “The one thing we told ourselves if we wanted to win was that we had to start off fast, and we just didn’t do that tonight.”

OVER EARLY: Boise State seized control of the teams' Mountain West opener in the first half and never relinquished it, scoring on four of its first six drives while holding Wyoming to its fewest yards in a half this season (73) for a 24-0 halftime lead. The Cowboys' first conference-opening loss since 2015 doubled as their worst league loss since a 56-35 setback at New Mexico in 2016.

How successful Wyoming’s fifth season under Craig Bohl was depends on the lens through which it’s viewed.

Saturday night’s matchup at Boise’s Albertsons Stadium between two of the top three teams in the Mountain West’s Mountain Division will pit strength against strength.

Boise State quarterback Brett Rypien throws a pass during the Broncos' game against Wyoming on Saturday at War Memorial Stadium in Laramie.

Boise State's Alexander Mattison reacts after scoring his team's first touchdown in the Broncos' game against Wyoming on Saturday at War Memorial Stadium in Laramie. 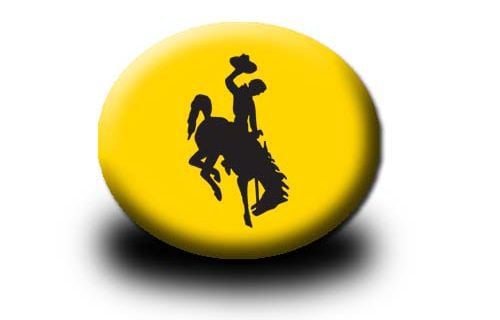