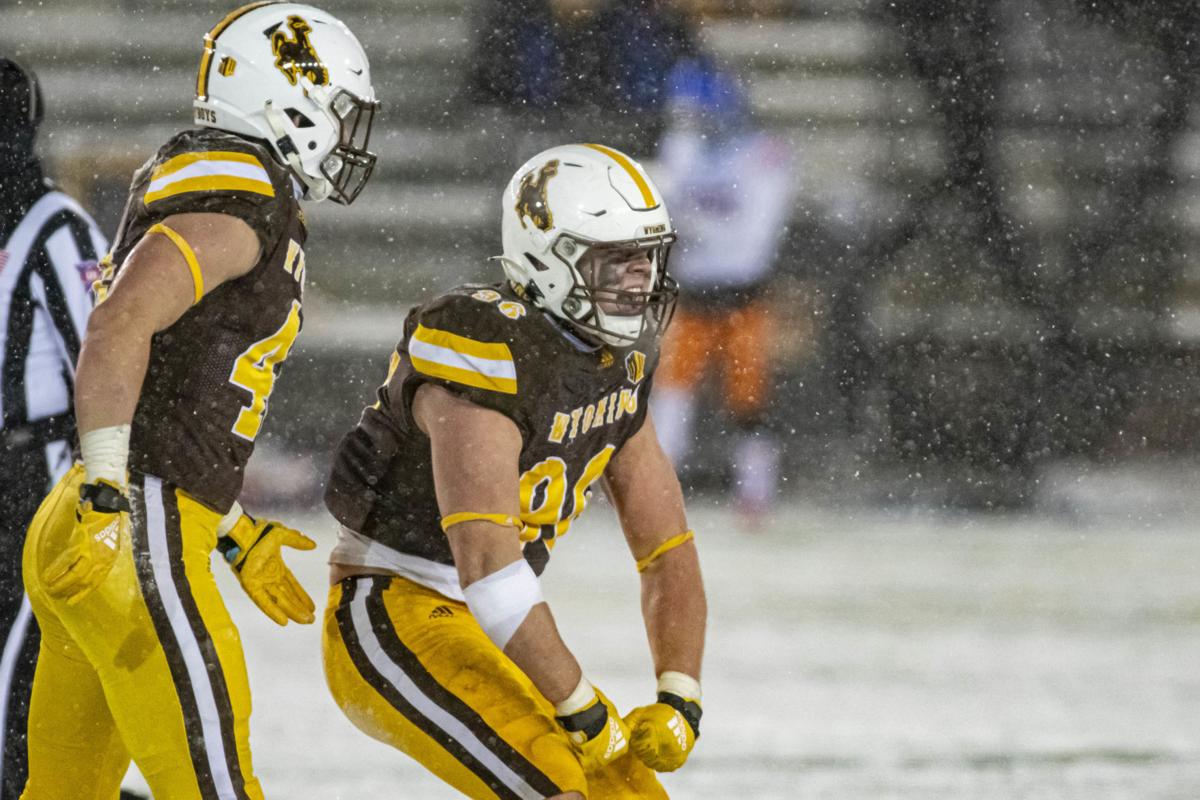 Wyoming defensive tackle Jordan Bertagnole celebrates following a play against Boise State on Dec. 12, 2020, at War Memorial Stadium in Laramie. The Casper native stepped in as a starter last season along a defensive line that will have more contributors back this spring. 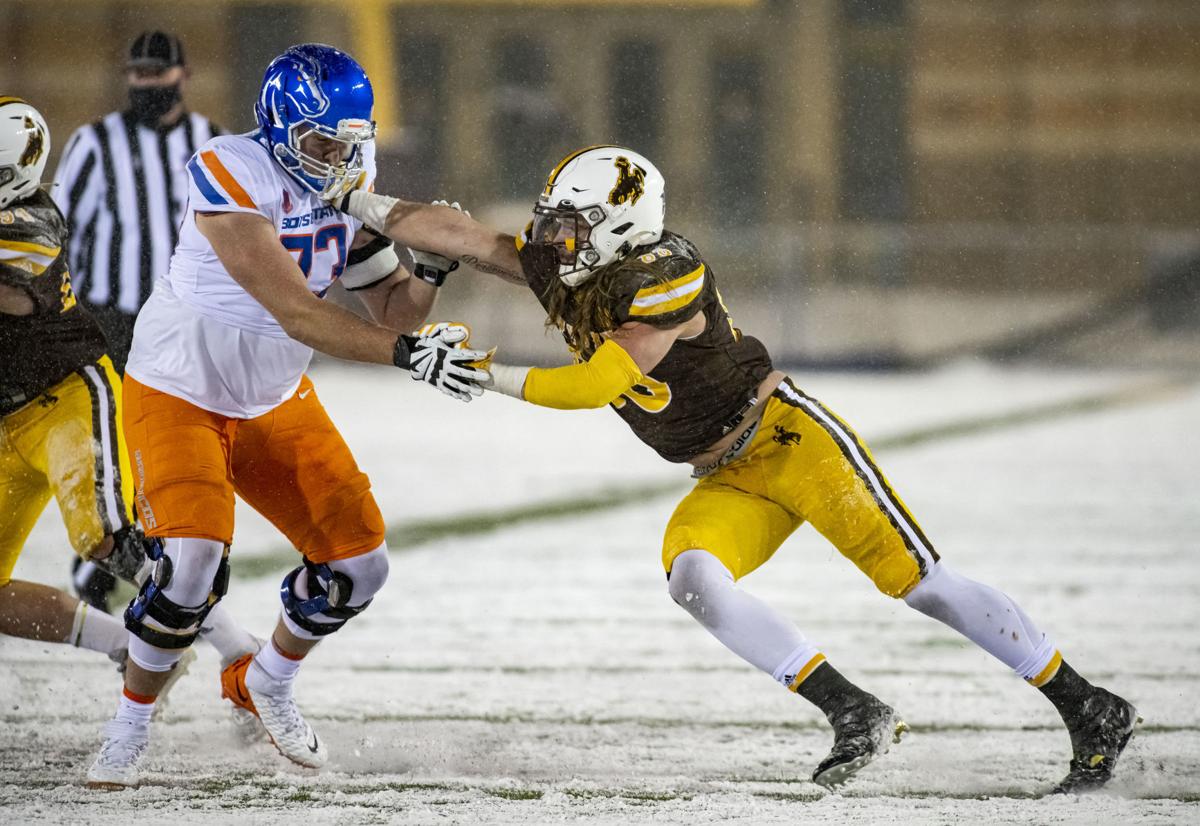 Wyoming defensive end Garrett Crall rushes against Boise State's Nick Crabtree on Dec. 12, 2020, at War Memorial Stadium in Laramie. Crall's decision to return for another season gives the Cowboys a boost on the edge heading into the spring.

LARAMIE — Wyoming’s defensive line made the best of a patchwork situation last season.

Between injuries and opt-outs amid the pandemic-shortened season, the Cowboys sustained their share of attrition up front. As a result, players who started low on the depth chart found themselves thrust into significant roles. UW ended the season with four freshmen in its two-deep along the defensive front, which included a pair of starters.

The group still managed to hold up, anchoring a defense that finished in the top 30 nationally in points and rushing yards allowed. But the Cowboys’ defensive line should get a boost this spring from being much closer to whole.

The unit received some good news this offseason when senior defensive end Garrett Crall decided to use the eligibility relief granted by the NCAA and return for a sixth season. The Cowboys’ active leader in career tackles and sacks, Crall has dealt with various injuries throughout his career and missed the first three games of last season because of it, though he’ll enter the spring with a clean bill of health.

UW coach Craig Bohl said earlier this offseason that all of the players who opted out last season have since returned to the team, meaning fellow defensive end Solomon Byrd is back in the fold. Byrd led UW with 6.5 sacks en route to freshman All-America honors in 2019 and should help bolster a pass rush the Cowboys had to get creative in producing last season. UW’s sack leader (Chad Muma, three) was a linebacker.

UW lost freshman defensive end Cameron Smith to the transfer portal following his suspension while reserve end Leevi Lafaele left the team after appearing in just three games the last two seasons. Another suspended lineman, Victor Jones, won’t participate in spring practice but could still rejoin the team in the fall, though Bohl said a decision on that won’t come until after the spring semester. Jones started the first three games at end last season but could play inside or out should he eventually return to the team.

Redshirt freshman Jaylen Pate is back after starting all six games at defensive end last season, and Davon Wells-Ross, another end who opted out last season, should immediately rejoin the rotation after serving as a backup two seasons ago. Sophomores Teagan Liufau and Jack Boyer and freshmen DeVonne Harris, Alonzo Hall, Braden Siders and Oluwaseyi Omotosho, a former three-star recruit, will also start competing for playing time on the edge this spring.

On the interior, the Cowboys are set to get another significant contributor back in Mario Mora, who started eight games at nose tackle as a redshirt freshman in 2019 before opting out last season. Sophomore Cole Godbout filled in for Mora at that spot and should create some competition this spring after finishing last season with 30 tackles and four tackles for loss, though Godbout is versatile enough to also play the 3-technique if needed.

Gavin Meyer is another option at the nose after getting one start there last season as a true freshman while Jordan Bertagnole will look to build on a breakout season at defensive tackle. Buried on the depth chart going into last season, Bertagnole, a walk-on from Casper, was thrust into the two-deep because of all the attrition and eventually took over as the starter alongside Godbout once Ravontae Holt went down with a season-ending ACL injury.

Bertagnole finished fourth on the team with 31 tackles while also notching 6.5 tackles for loss and 2.5 sacks and could very well remain on the two-deep this spring with Holt still limited following surgery. Bohl said in February that Holt, who’s coming off his second major knee injury in as many seasons, isn’t expected to be at full speed again until sometime this summer.

Signees Will Evans, JJ Uphold, Micah Young and Tyce Westland will join the competition once they arrive on campus this summer, but the Cowboys have another reinforcement back in the fold in sophomore defensive tackle Claude Cole, who also opted out last season. Freshmen Akili Bonner and Caleb Robinson will provide even more depth along a defensive line that will start putting itself back together this spring.

Join us each week for the Pokescast, a podcast about University of Wyoming athletics brought to you by the Star-Tribune.

This is the sixth in a 10-part series previewing each position for Wyoming heading into spring practice. A new position will be published each day leading up to the first day of practice April 6.

WELCOME BACK: UW is set to return four defensive linemen this spring who opted out last season, including freshman All-American Solomon Byrd.

STILL RECOVERING: Defensive tackle Ravontae Holt, who's coming off his second knee injury in as many seasons, is expected to be a limited participant this spring.

The Cowboys know what they have in their top two ball carriers, but what's behind them?

With Rome Weber set to return, the Cowboys have their top three safeties back this spring.

Wyoming defensive tackle Jordan Bertagnole celebrates following a play against Boise State on Dec. 12, 2020, at War Memorial Stadium in Laramie. The Casper native stepped in as a starter last season along a defensive line that will have more contributors back this spring.

Wyoming defensive end Garrett Crall rushes against Boise State's Nick Crabtree on Dec. 12, 2020, at War Memorial Stadium in Laramie. Crall's decision to return for another season gives the Cowboys a boost on the edge heading into the spring.