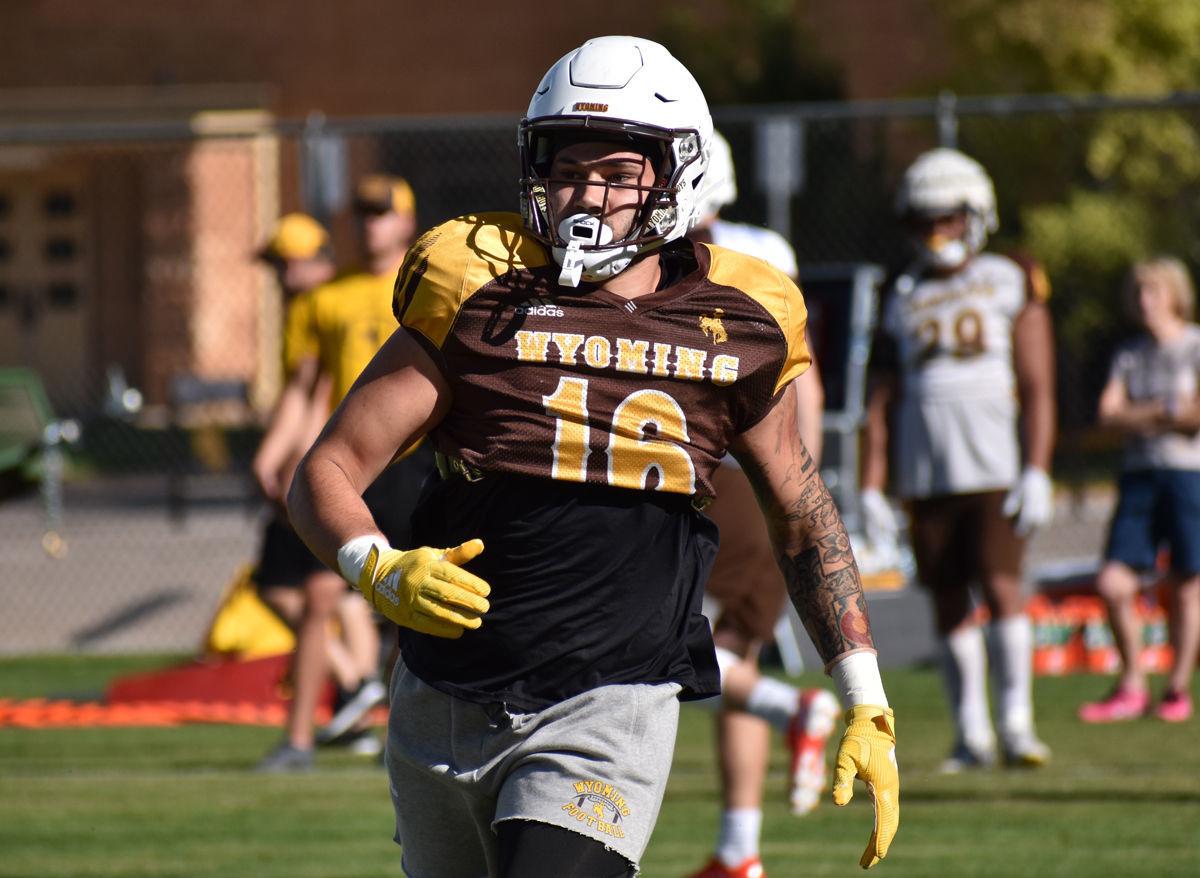 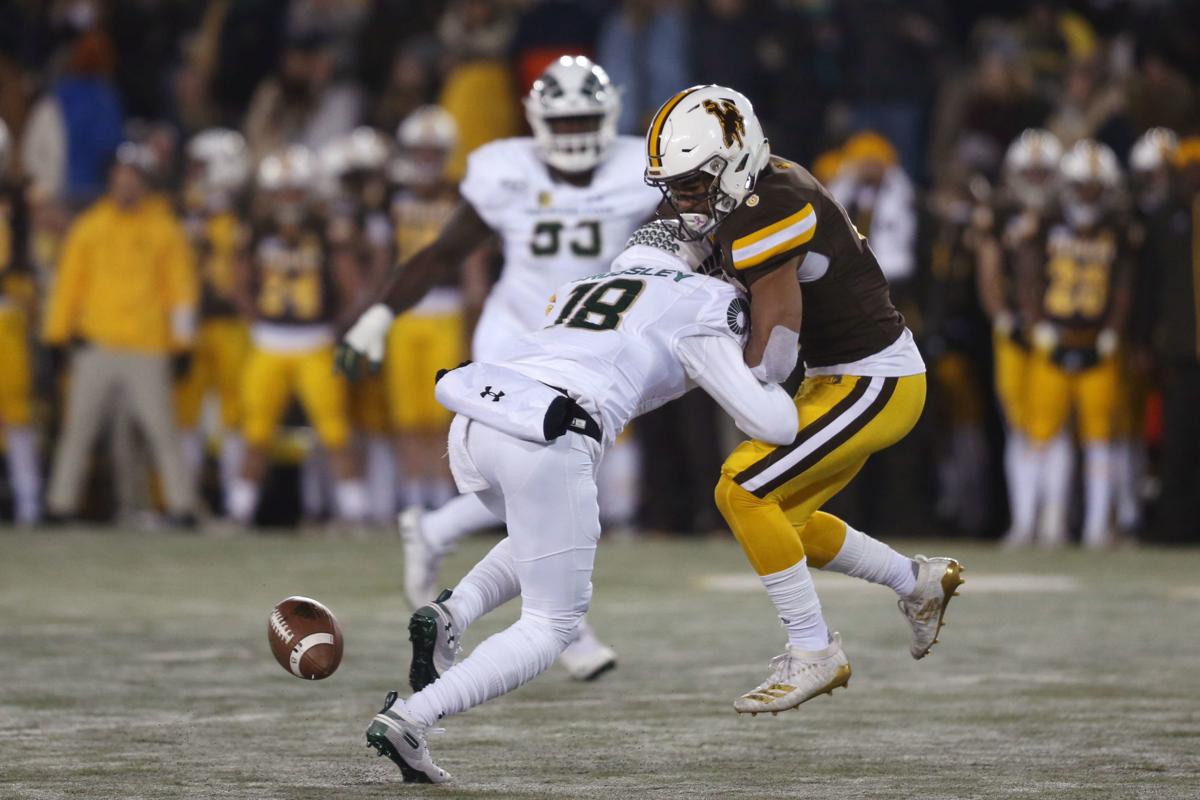 Wyoming wide receiver Dontae Crow drops a pass in the first half of the annual Border War game against Colorado State on Nov. 22, 2019 at War Memorial Stadium in Laramie.

LARAMIE — Part of the struggle has fallen on their shoulders. Some of it has been out of their control.

Nevertheless, Wyoming’s receiving corps enters the spring desperately seeking to become a more productive unit. And it’s a group that, in a way, is starting over.

UW has gone two straight seasons with one of the least effective passing games not only in the Mountain West but in all of college football. The Cowboys haven’t finished any better than 123rd out of 130 Football Bowl Subdivision teams in passing yards per game and ranked among the bottom six teams in completion percentage, failing to complete at least half their passes during that span.

Some of that has been inconsistency among the Cowboys’ quarterbacks in the post-Josh Allen era, and some of it has been a sheer lack of chances with UW opting to lean heavily on its running game while breaking in its young signal callers. Only Air Force (294) has attempted fewer passes in the MW the last two seasons than Wyoming (532), which hasn’t started a quarterback older than a sophomore in any of its last 25 games.

But the occasional drop has also played into the Cowboys’ inconsistency through the air while big plays on the outside have been few and far between as of late. There’s still some experience out wide, but any sort of pecking order among a somewhat new-look group is far from being settled.

That attrition leaves the Cowboys returning just 19 catches from last year’s receiving corps, though the holdovers have flashed some big-play potential. Upperclassmen Ayden Eberhardt, Gunner Gentry and Dontae Crow figure to start the spring atop the depth chart after being part of the rotation last season.

Eberhardt and Gentry, the younger brother of former UW standout receiver Tanner Gentry, combined for just 14 catches last season, but Eberhardt averaged 21 yards per reception and caught two touchdowns, including a 51-yard catch-and-run score in the Arizona Bowl. Gentry, at 6-foot-3 and 210 pounds, had the best per-catch average among the group last season at 21.6 yards.

The pair could be the favorites to take over on the outside. Crow was listed as Conway’s backup at the Z (outside) position throughout last season, but at 5-9 and 178 pounds, the Sheridan native could be an ideal fit in the slot after catching five passes for 70 yards last season.

But they will all have plenty of competition this spring. Wyatt Wieland will again be in the mix after spending most of his redshirt freshman season on the two-deep while another crop of freshmen will also get an extensive look.

Alex Brown and Isaiah Neyor bring bigger bodies to the position, a trend among UW’s receiver signees in recent recruiting classes. Both will be going through their first spring at UW while it will be the second for another redshirt freshman, Devin Jennings, who enrolled early last year.

All three of them are 6-2 or taller. They’ll be joined by a pair of 2020 signees this summer in Joshua Cobbs and Tyrese Grant, who go 6-4 and 6-0, respectively.

“What we find in the Mountain West sometimes is you can gain some mismatches when you have a big, physical body and deploy that guy,” Bohl said in February, referring to recruiting taller receivers. “Some of the defensive backs in our league sometimes don’t have the stature. So you’re trading off a little bit at times with speed for size. But I think we’ll have four really big receivers, and then we’ll integrate some other guys who are faster slot guys.”

Most of them will get a chance to start making their case for spots in the rotation this spring.

This is the fourth in a 10-part series previewing each position for Wyoming heading into spring practice, which has not yet been canceled in response to the coronavirus pandemic. UW has canceled all spring athletic competitions.

A UW spokesman told the Star-Tribune late last week the football team is still hoping to hold practice at some point, but a decision hasn't yet been made.

EXPERIENCED OPTIONS: Ayden Eberhardt and Gunner Gentry are back after being part of the rotation last season. The pair led the team in yards per catch a season ago.

LARAMIE — The number of wide receivers that signed with Wyoming during the 2020 recruiting cycle was small, but the group possesses a distinct…

Wyoming wide receiver Dontae Crow drops a pass in the first half of the annual Border War game against Colorado State on Nov. 22, 2019 at War Memorial Stadium in Laramie. 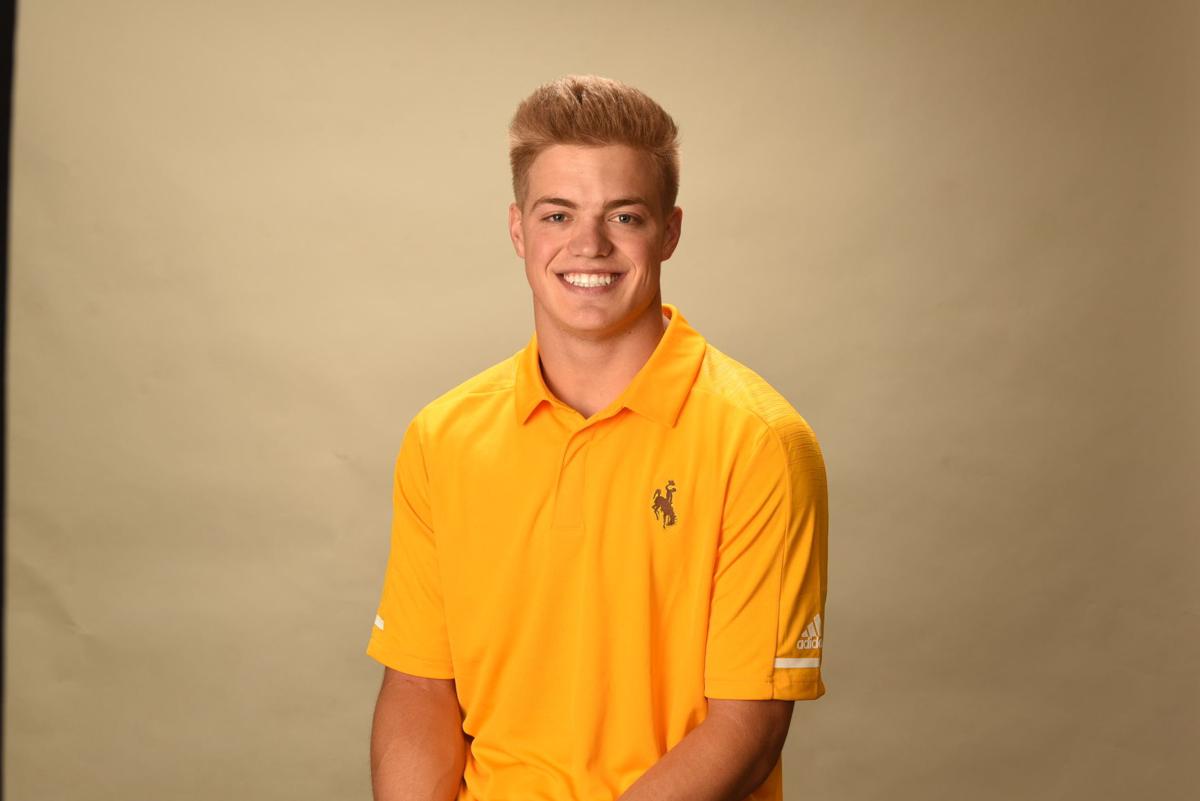