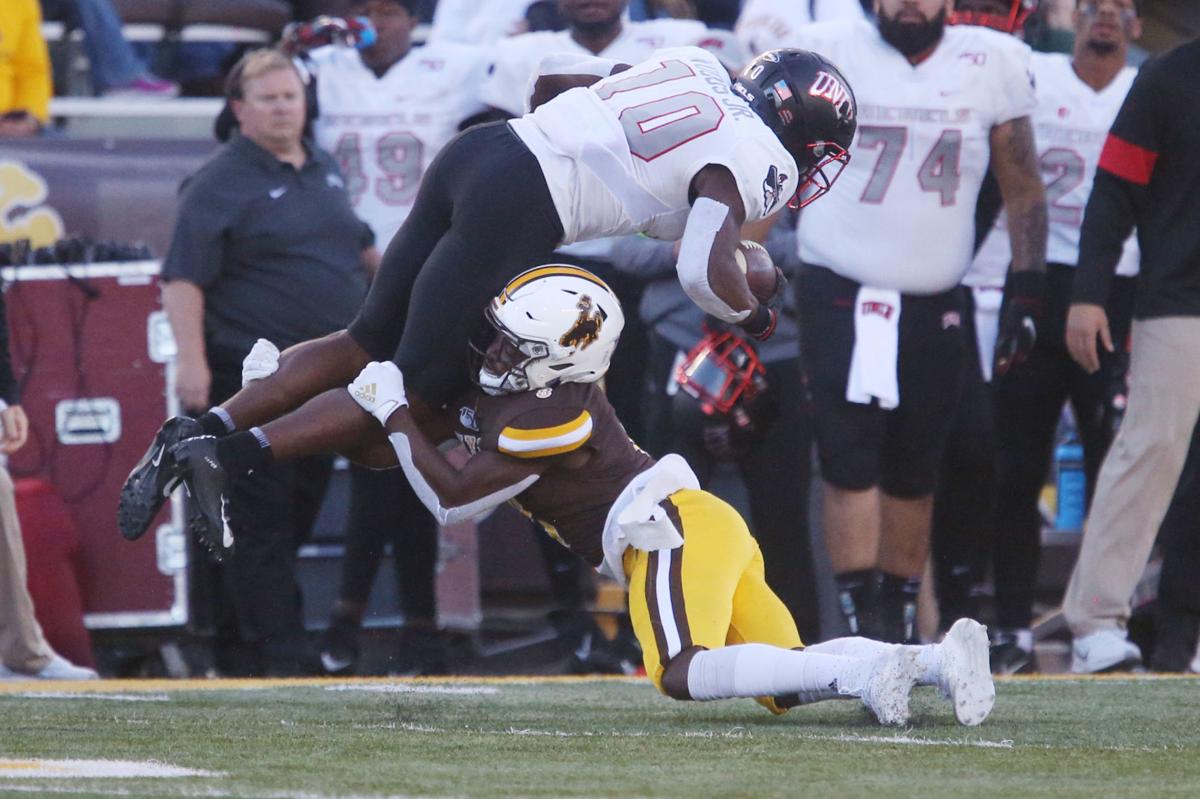 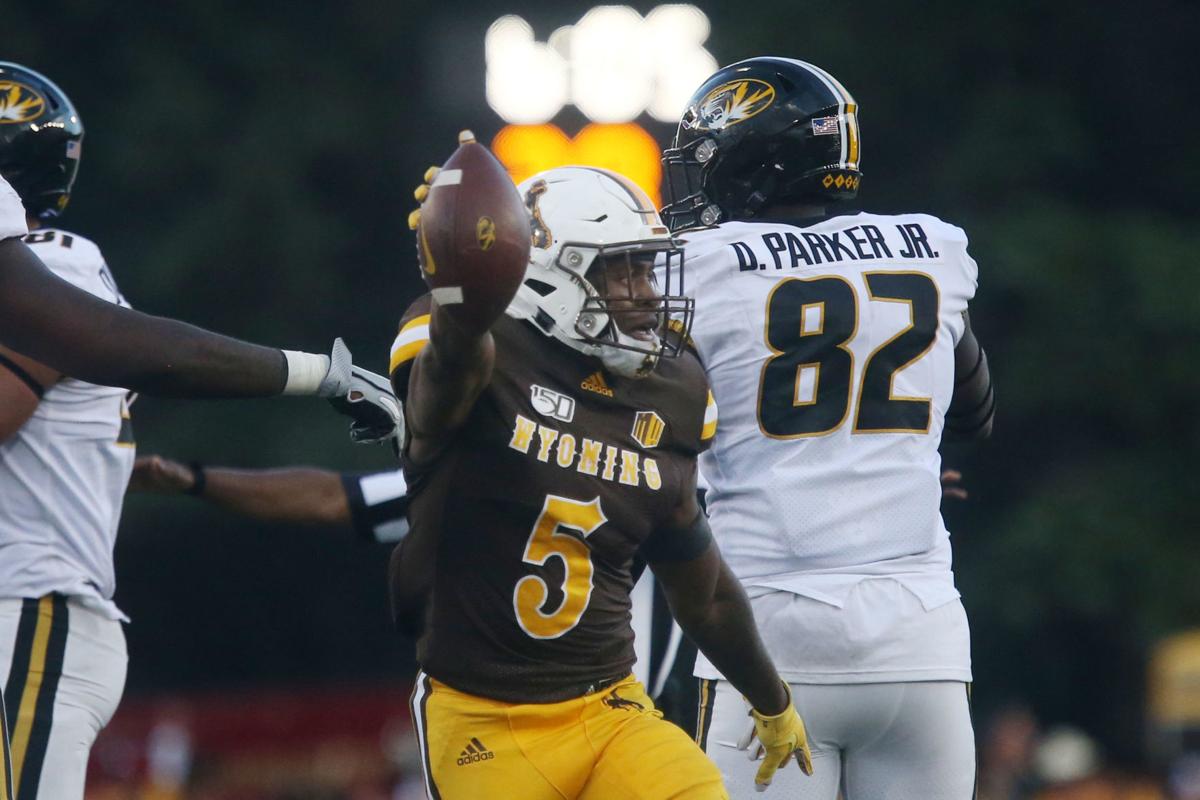 Wyoming safety Esaias Gandy reacts after a play against Missouri on Aug. 31, 2019 at War Memorial Stadium in Laramie.

LARAMIE — This time a year ago, Wyoming was tasked with replacing the most productive safety duo in program history with Andrew Wingard and Marcus Epps off to the NFL.

Now the Cowboys have another significant hole on the back end of their defense that has to be filled.

Alijah Halliburton stepped in for Wingard at strong safety and picked up right where his predecessor left off. The 6-foot-2, 190-pounder led the Mountain West with 130 tackles, becoming one of three UW players to earn first-team all-league honors last season.

It was also Halliburton’s first and only season as a full-time starter as he spent most of his career biding his time behind Wingard and Epps on the depth chart. With Halliburton out of eligibility and preparing for his own shot at the NFL, UW needs another replacement at that spot.

And much like Halliburton, the Cowboys have some more upperclassmen that may be primed to take over after waiting their turn.

Esaias Gandy spent most of last season as Halliburton’s primary backup and even got his first career start late in the season against Boise State. Gandy, who will be a senior in the fall, played in all but one game and finished with 24 tackles and two pass breakups.

He and Miles Williams have combined to play in 56 career games, though the 6-1, 199-pound Williams has yet to start one entering his junior season. Williams, who may be Gandy’s stiffest competition for the starting job at the position, played in all 13 games a season ago with most of his reps coming on special teams.

Another senior-to-be, Braden Smith, may also get a look at strong safety after getting beat out for the starting spot at free safety last season by Rome Weber, an emerging playmaker that finished with 38 tackles, four pass breakups and an interception as a redshirt freshman.

Smith spent last season backing up Weber and brings a wealth of experience to whichever safety spot he ends up playing next season. The 5-10, 185-pounder, who had 11 tackles and one pick a season ago, has played in 37 career games with one start. Cam Murray and walk-on Taylor Dodd are back to provide depth.

But the Cowboys also have some youngsters at the position who could push the veterans for playing time if not for spots at the top of the depth chart. This spring would be the first at UW for freshmen Keonte Glinton and Jerome Cooper, both of whom redshirted last season. Glinton, UW’s highest-ranked defensive back signee last year, played in a couple of games.

UW will also add two more safeties this summer in Keshaun Taylor and Isaac White, two of five defensive backs the Cowboys signed in this year’s recruiting class. The 6-0, 195-pound Taylor was ranked a three-star recruit by 247Sports coming out of Thomas Jefferson High in Denver.

The mixture of seasoned vets and young potential should make for a good variety of competition for first-year defensive coordinator Jay Sawvel, who will also be in charge of coaching UW’s safeties.

This is the eighth in a 10-part series previewing each position for Wyoming heading into spring practice, which has been postponed indefinitely in response to the coronavirus pandemic. Practice was scheduled to begin March 24.

SEASONED OPTIONS: Strong safety Alijah Halliburton is gone after leading UW with 130 tackles last season, but seniors Braden Smith, Esaias Gandy and Miles Williams are all options to take over there.

ROME-ING HIS TERRITORY: Rome Weber is back at free safety after starting 12 games as a redshirt freshman.

Wyoming safety Esaias Gandy reacts after a play against Missouri on Aug. 31, 2019 at War Memorial Stadium in Laramie. 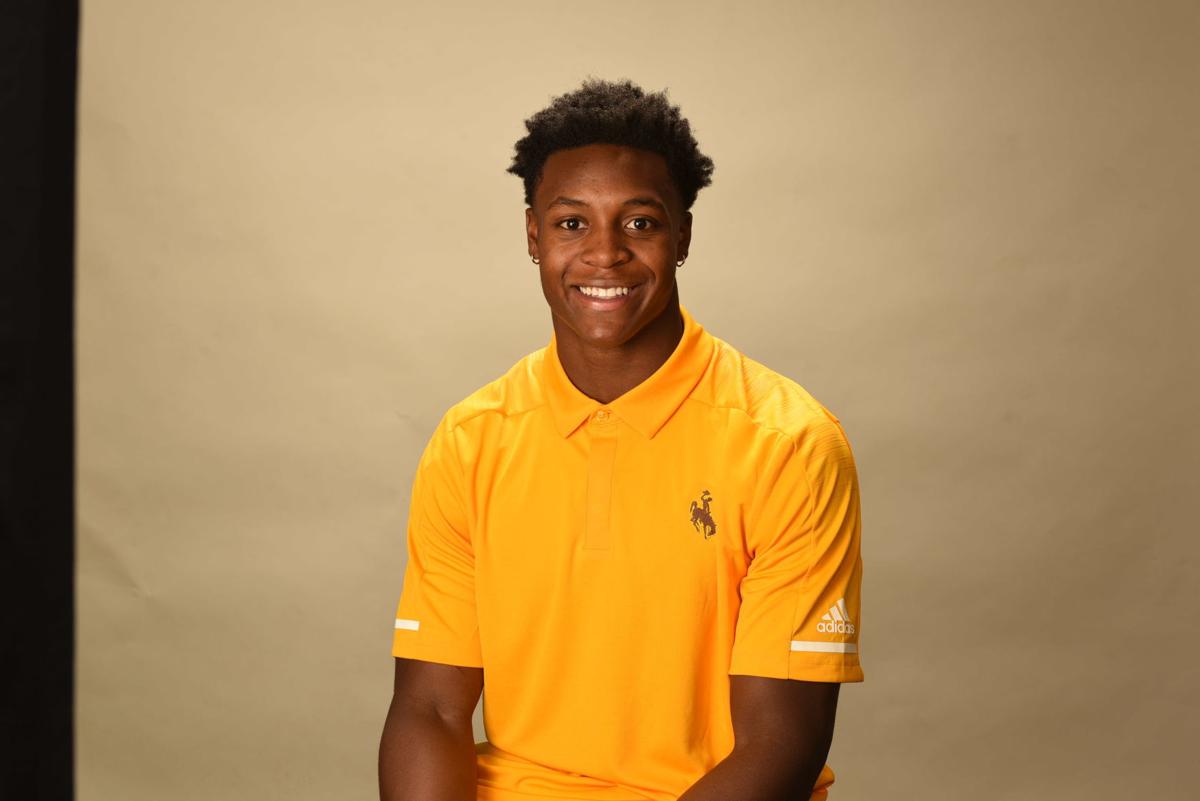