LARAMIE — With a little familiarity, Wyoming has filled out its defensive coaching staff.

Jay Sawvel has been hired as the Cowboys’ defensive coordinator while former UW assistant Marty English and Benny Boyd have also joined the staff, UW coach Craig Bohl announced Thursday. English, who was an assistant at UW under Joe Glenn and Dave Christensen from 2003-11, is returning to coach defensive ends. Boyd will coach cornerbacks.

The trio replaces Jake Dickert, A.J. Cooper and John Richardson, all of whom left last month to join Nick Rolovich’s staff at Washington State. Sawvel, who was out of coaching this past season, will take over the defense from Dickert, who’s taking the same position with the Cougars after one season as UW’s defensive coordinator.

“Jay comes from the great coaching tree of (former Minnesota coach) Jerry Kill and has a long relationship with Coach Kill,” Bohl said in a statement. “I’ve admired Jay’s work through the years. He’s an outstanding recruiter, a great secondary coach and an experienced coordinator.”

He will take over a UW defense that finished in the top 15 nationally in points and rushing yards allowed this season. The Cowboys are losing six defensive starters, including their top three tacklers in Alijah Halliburton, Logan Wilson and Cassh Maluia. But UW is set to return six of its top eight defensive linemen, including sack leader Solomon Byrd.

Sawvel, who played at Division III Mount Union in the early 1990s, has also coached at Northern Illinois and Southern Illinois.

“I am honored and excited to be a Cowboy,” Sawvel said in a statement. “Having an opportunity to work for a championship coach like Coach Bohl is something I am really looking forward to. The players here have been great to me as I’ve gotten a chance to meet them, and I can’t wait to start working with them daily.”

English returns to UW after spending the last two seasons as the defensive coordinator at Football Championship Subdivision member Northern Colorado, his alma mater. His time at UNC was preceded by a six-year stint as an assistant at Colorado State, the latter two spent as the Rams’ defensive coordinator and linebackers coach.

English spent the first six seasons of his first stint at UW as Glenn’s linebackers coach. He doubled as defensive coordinator and special teams coordinator under Christensen from 2009-11, helping the Cowboys to two bowl appearances during that time.

“Marty English enjoys a great reputation recruiting the Rocky Mountain area,” Bohl said. “He has spent time previously here at Wyoming, at Colorado State and at Northern Colorado. ... He has tremendous defensive experience. Marty will add great value on our defensive staff, and we look forward to his recruiting efforts in the state of Colorado.”

Boyd comes to UW after one season coaching cornerbacks and special teams at Eastern Illinois. Before that, Boyd spent four seasons in the same roles at Central Washington. The Illinois native has also had stints as an assistant at North Dakota and Aurora (Illinois) University, where he played from 1996-99.

“This is a tremendous opportunity, and I am humbled to join a program the caliber of the University of Wyoming,” Boyd said in a statement. “To be able to work with Coach Bohl and this coaching staff and to uphold the high standards that have been set here at Wyoming is a daunting task but is one I am extremely excited about.”

Said Bohl, “Benny is a very capable corners coach and special teams coordinator as well. He has demonstrated his skills by molding young men and doing an excellent job of mentoring many players over his long career.”

Bohl also announced the promotion of defensive tackles coach Pete Kaligis to defensive run-game coordinator, a title previously held by Cooper. Kaligis, the longest-tenured assistant at UW, is entering his 12th season on the Cowboys’ staff.

“His role will increase with these new responsibilities,” Bohl said of Kaligis. “He transitioned from being an offensive coach prior to joining our staff to becoming a very effective defensive coach who does a great job mentoring his players.”

FAMILIAR FACE: English is beginning his second stint as a UW assistant. He coached under Joe Glenn and Dave Christensen from 2003-11.

HE SAID IT: "I am honored and excited to be a Cowboy. Having an opportunity to work for a championship coach like Coach Bohl is something I am really looking forward to." -- Sawvel. 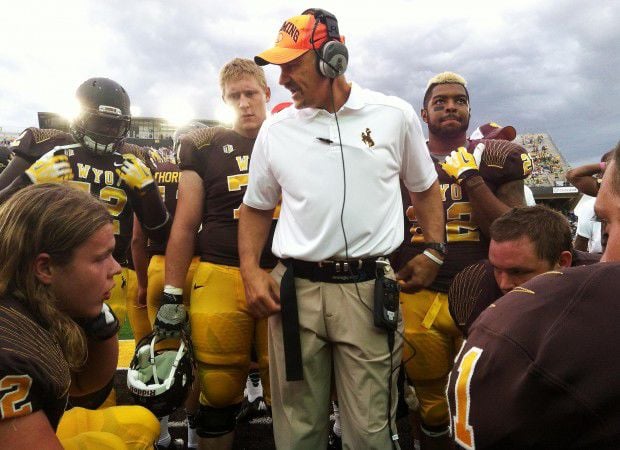 Wyoming assistant coach Pete Kaligis talks with Cowboys players during their game against Idaho on Sept. 7, 2013 at War Memorial Stadium in Laramie. 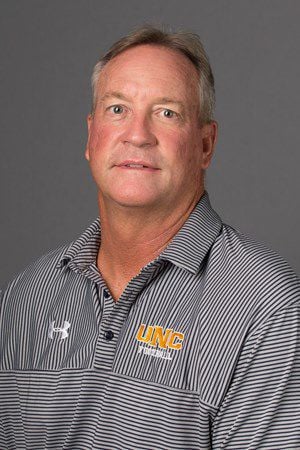