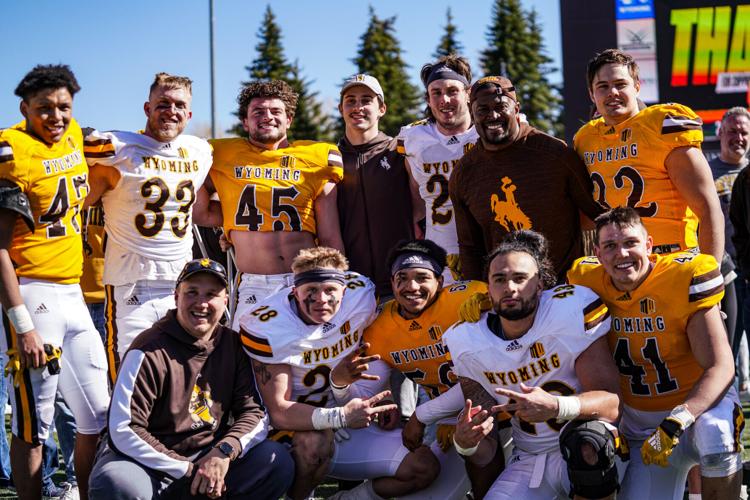 University of Wyoming linebackers pose for a group photo after the Cowboys' Brown and Gold Spring Game on April 30 at War Memorial Stadium in Laramie. Cody's Nic Talich is at the bottom right, with UW linebackers coach Aaron Bohl at the bottom left. 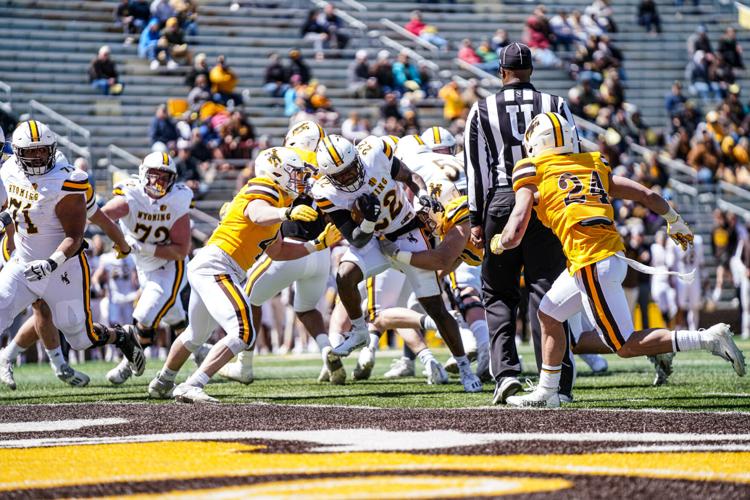 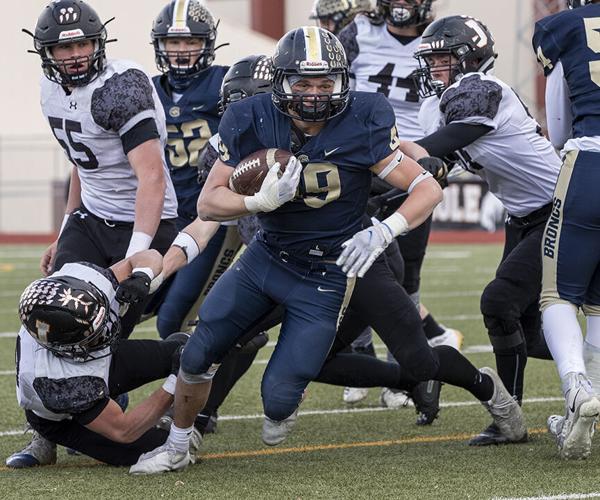 Cody's Nic Talich runs for yardage against Jackson in the Class 3A state championship game on Nov. 14, 2020 at Spike Vannoy Field in Cody.

LARAMIE – Craig Bohl is never going to allow last names on the back of jerseys.

But for Wyoming fans with a keen memory, No. 41 looked awful familiar during the spring game April 30 at War Memorial Stadium.

Nic Talich, a walk-on from Cody blessed with brown and gold football genes, led the Gold team with four tackles and 2.0 tackles for loss.

The 6-foot, 217-pound redshirt freshman joined the program as a safety, moved to linebacker this offseason and was thrown in at nose guard during the Brown and Gold Game.

When Talich was told by assistant coach Shannon Moore during the recruiting process that the staff was interested in him as a preferred walk-on, how did the son of legendary UW linebacker Jim Talich react?

“I think I told him I would be a water boy,” Nic Talich said with a laugh. “I was coming to school here. Wyoming is everything for me, so I always knew I was going to come here.”

Talich was the Star-Tribune’s Super 25 defensive player of the year after racking up 128 tackles to help the Broncs win the Class 3A state championship in 2020.

During his first season with the Cowboys, the transition to safety – a position Talich had never played before – did not go well.

“I think I was the worst player on the team as a safety. I was horrible,” Talich said. “Now they’ve got me back at linebacker and I feel pretty good about it. I’m just happy to be back on the field tackling people.”

As a Wyoming kid, Talich is well aware of the Logan Wilson story. The former Natrona County High standout also started out at safety before developing into an NFL starting middle linebacker during his career at UW.

Wilson, who is entering his third season with the Cincinnati Bengals, has reached out to Talich and even signed a jersey for him.

“Growing up in Wyoming you always know who is a good athlete, and I watched him in high school. He’s a stud,” Talich said. “His story is just crazy. It gives kids like us in Wyoming something to look up to. I mean, obviously he’s one of the greats, and it’s an inspirational story for kids like me.”

Jim Talich is also one of the greats. Originally a walk-on from Pine Bluffs, he finished his career (1993-97) with 440 tackles, which ranks third on UW’s all-time list behind Galand Thaxton (467) and Andrew Wingard (454).

Cory Talich, Jim’s older brother, played for the Pokes from 1990-93. Cory’s son, Nathanial Talich, will be joining the UW men’s basketball program as a walk-on this summer.

So it shouldn’t have been a surprise to see Nic Talich making plays in the spring game.

“I love that kid. He’s such a vital part of this team. All the Wyoming kids are, to be honest,” starting defensive tackle Jordan Bertagnole, a former walk-on from Casper, said of Talich. “We knew they only had two D-tackles on that Gold team and there were going to have to be some guys that stepped up. … Then we saw 41, Nic Talich, was in there at nose guard and three technique. I mean, he was throwing some moves on them and he was making plays.

“I just love seeing Wyoming kids out there making plays. It was good to see.”

The Wyoming natives helped Bohl and the staff stabilize the team after a restless offseason of transfer portal activity.

“You have heard a lot of the talk about people leaving, but for me it doesn’t even cross my mind,” Johnson said. “The people here are the people we’re going to play with and those are the dudes I want to be around right now and the ones I want to be talking about. …

“Everyone here wants to be here and one of the things (Bphl) really emphasized in our team meeting was that we’re playing for Wyoming, we’re not playing at Wyoming. I feel like everyone here is really buying into the team and playing for the right purposes, playing for the brothers around them, which really makes it a good environment.”

After one of the 14 spring practices, Bohl presented Talich with a football in front of the team to recognize his play.

Needless to say, No. 41 is ready to ride for the brand.

“That was crazy. I was not expecting that at all,” Talich said of catching the head coach’s eye with his fast development learning the middle and weak-side linebacker spots. “Coach Bohl is awesome. It’s great to play for him. He just puts us all in great position and he makes us all feel wanted. I gave the ball to my brother, Jacob, he’s a little fifth grader now, and he hung it on his wall.

“It means a lot to me and my family.”

Talich enters the state meet after winning gold in the 100- and 200-meter dashes and the long jump at last weekend's Class 4A West Regional meet.

University of Wyoming linebackers pose for a group photo after the Cowboys' Brown and Gold Spring Game on April 30 at War Memorial Stadium in Laramie. Cody's Nic Talich is at the bottom right, with UW linebackers coach Aaron Bohl at the bottom left.

Cody's Nic Talich runs for yardage against Jackson in the Class 3A state championship game on Nov. 14, 2020 at Spike Vannoy Field in Cody.