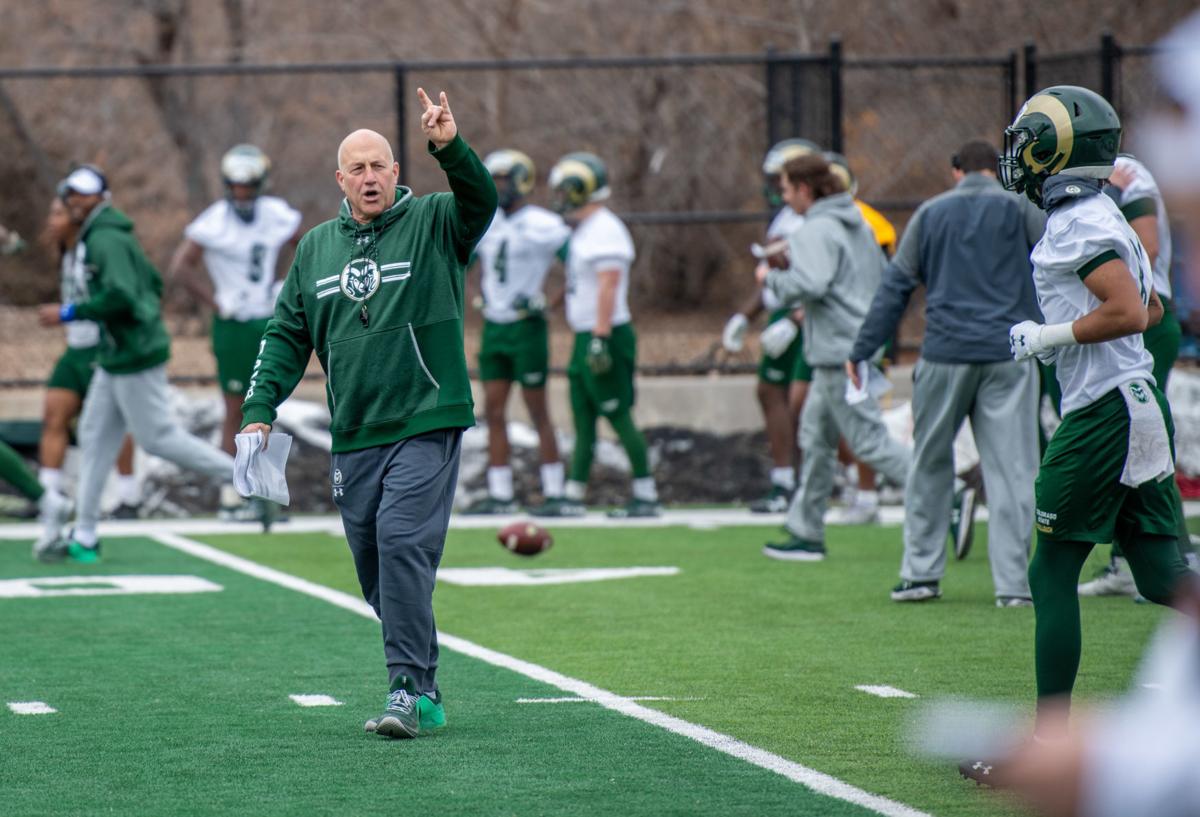 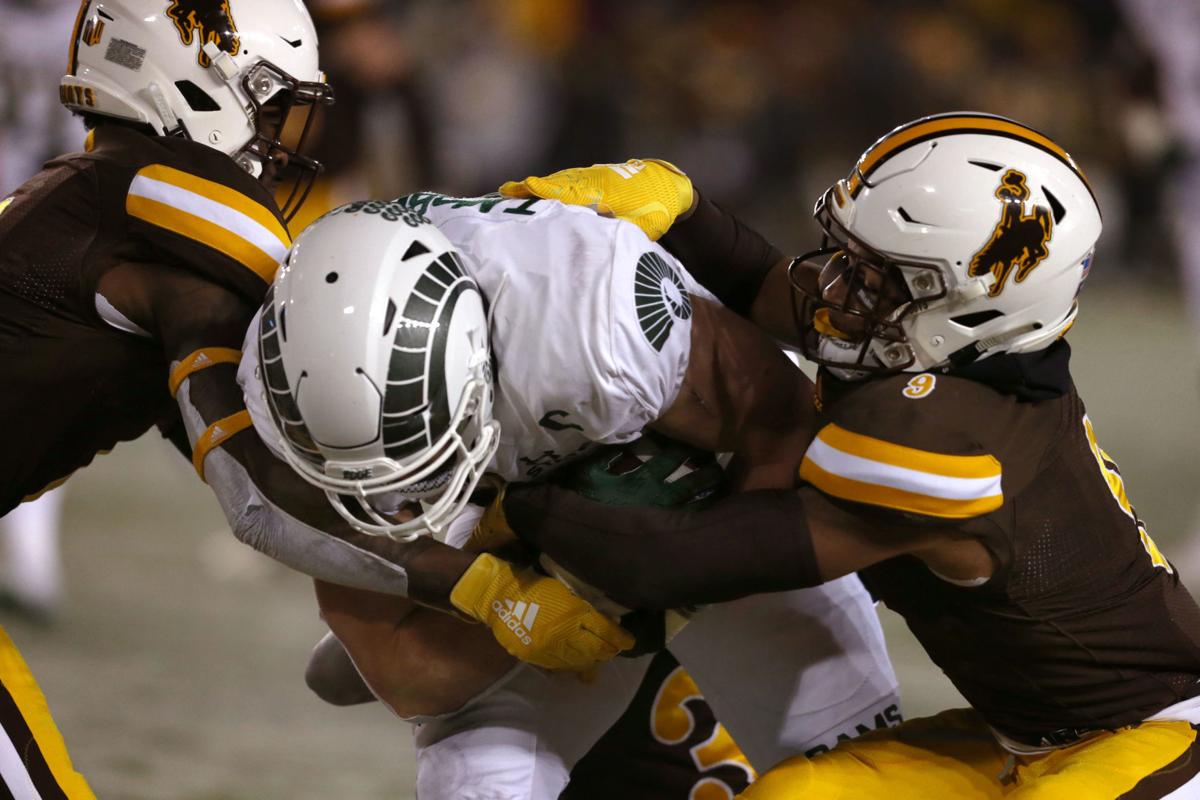 Colorado State tight end Trey McBride is brought down by Wyoming's Rome Weber, left, and Tyler Hall in the second quarter of their game Nov. 22, 2019 at War Memorial Stadium in Laramie.

The Star-Tribune is taking an early look at each of Wyoming’s opponents in the order they appear on the Cowboys’ 2020 schedule. Next up is Colorado State.

LARAMIE — The Border War will feature a new coach on the sideline this season.

Addazio had previous head coaching experience at Temple and, most recently, Boston College, but neither stop proved to be all that successful. Addazio’s overall head coaching record is 57-55, which includes a 44-44 mark during his seven-year tenure at Boston College. Addazio’s hire raised even more eyebrows given the Connecticut native’s lack of ties to the western United States.

Now Addazio is tasked with turning around a CSU program that’s combined to win seven games the last two seasons, finishing next to last in the Mountain West’s Mountain Division both years. The Rams also have lost four straight to Wyoming, which will try to make it five in a row when the teams renew their rivalry on Halloween at CSU’s Canvas Stadium.

With stints at Syracuse, Notre Dame and Florida as an offensive assistant preceding his time as a head coach, Addazio’s background is on the offensive side of the ball, particularly in the running game. CSU has some pieces Addazio can work with.

The Rams have an experienced quarterback in senior Patrick O’Brien, who led one of the MW’s most potent passing games last season.

O’Brien threw for 2,803 yards and 13 touchdowns for an offense that averaged 305.3 passing yards per game — third-most in the league — though O’Brien might have to fend off Temple graduate transfer Todd Centeio during preseason camp in order to keep his job.

CSU has one of the conference’s top targets back in 6-foot-6 matchup nightmare Warren Jackson (1,119 yards, eight receiving TDs), who’s primed to follow the likes of Michael Gallup and Rashard Higgins as the next elite receiver to go from CSU to the NFL. Freshman All-American Dante Wright, Nate Craig-Meyers, E.J. Scott and all-conference tight end Trey McBride also are returning, keeping the Rams’ top group of pass-catchers intact for whoever is taking the snaps behind center.

All of that returning production may force CSU to go to the air more than Addazio likes to, particularly early in the season.

Addazio, a former offensive line coach, is more fond of the ground game, but the Rams have lost their leading rusher, Marvin Kinsey Jr., as well as multiple starters along the offensive line. The Rams need to improve a running game that produced the third-fewest yards per game (132.2) in the league last season. Marcus McElroy Jr. and Jaylen Thomas are likely to duke it out to be the featured back after combining to rush for 592 yards a season ago.

Addazio and his coaching staff have plenty of work to do on the defensive side of the ball, too, particularly when it comes to the Rams’ ability to stop the run. Only San Jose State, Hawaii and Utah State allowed more rushing yards than CSU did last season (195.8 per game). Having Elison Hubbard (7.5 tackles for loss, team-high 5.5 sacks) and Manny Jones (team-high eight TFL, five sacks) back on the defensive line should help, and the Rams are getting more reinforcements up front with the addition of graduate transfer Scott Patchan, who will be immediately eligible after starting six games for Miami last season.

Leading tackler Jamal Hicks has exhausted his eligibility, but the Rams return three of their top four tacklers, including linebackers Dequan Jackson and Cam’ron Carter. Rashad Ajayi and Marshaun Cameron return at corner, and fifth-year senior Logan Stewart is back at safety after leading CSU with two interceptions a season ago, though turnovers are something the Rams could use more of after forcing just 13 all of last season.

And if CSU needs to flip the field, the Rams have as good a punter as any team in college football to do that in All-American Ryan Stonehouse, who averaged more than 46 yards a punt last season. Assuming the coronavirus outbreak doesn’t affect the college football schedule, CSU will be seven games into the Addazio era when he makes his Border War coaching debut.

CSU At A Glance

THE LATEST: A second straight losing season, which included a fourth consecutive loss to Wyoming in the Border War series, marked the end of the Mike Bobo era at Colorado State. Steve Addazio was hired as his replacement in December.

Football players from around the league are the latest to demand reform before returning to competition amid the coronavirus pandemic.

Big Sky still mulling whether or not to allow its teams to play non-conference games this fall.

Colorado State tight end Trey McBride is brought down by Wyoming's Rome Weber, left, and Tyler Hall in the second quarter of their game Nov. 22, 2019 at War Memorial Stadium in Laramie.