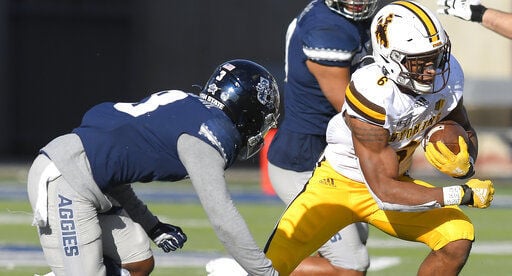 Wyoming running back Xazavian Valladay carries the ball as Utah State safety Troy Lefeged Jr. moves in for the tackle during their game last season in Logan, Utah. Lefeged is returning to the Aggies' defense after leading the team in tackles a season ago, though he's making the move to linebacker. 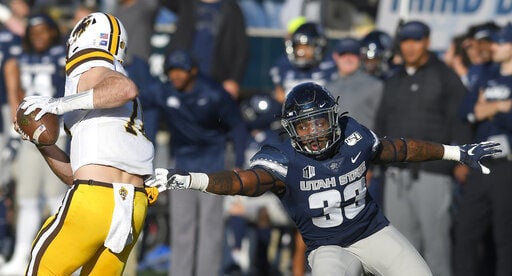 The Star-Tribune is taking an early look at each of Wyoming’s opponents in the order they appear on the Cowboys’ 2020 schedule. Next up is Utah State.

For the Aggies, the questions start at the most important position on the field: Who replaces Jordan Love?

Love may have been inconsistent during his time at Utah State — he mixed plus arm strength with questionable decision-making at times — but there was never a doubt about his raw talent as a quarterback. Love threw for 8,600 yards, 60 touchdowns and 29 interceptions in three seasons, developing himself into a first-round draft pick by the Green Bay Packers this year.

Wyoming will host Utah State on Nov. 7 assuming the schedule isn’t affected by the coronavirus outbreak, and who the Cowboys will see behind center for the Aggies when that time comes is anyone’s guess. The teams have split their last four meetings with three of them being decided by a single possession.

It looks like a four-man race among Henry Colombi, Andrew Peasley, Josh Calvin and Cooper Legas, though sheer experience may give Colombi the edge here. A fourth-year junior, Colombi (460 career passing yards, four TDs) has played in 13 career games, including limited snaps against UW last season in place of an injured Love. Peasley has seen action in four games; Calvin and Legas are both redshirt freshmen.

Some good news for whoever ends up winning the job is that he’ll have a fairly seasoned group of wideouts at his disposal. Jordan Nathan, Deven Thompkins and Savon Scarver, who doubles as an All-American kick returner, are all back after combining for 120 receptions and five receiving touchdowns last season.

The bad news is Siaosi Mariner, who led the Aggies in receptions (63), yards (987) and receiving touchdowns (10) last season, has exhausted his eligibility, leaving Utah State in need of a go-to playmaker on the outside. If Nathan, who was second on the team in catches (56) and yards (581), doesn’t fill that void, Utah State may look to junior college transfer Justin McGriff, an enticing target at 6-foot-6.

The Aggies also have to find a featured running back now that leading rusher Gerold Bright is out of eligibility. Jaylen Warren is the most likely candidate to take over that role after rotating with Bright a season ago, finishing with 569 yards and five rushing scores.

Attrition has also hit Utah State on the defensive side of the ball. Tackling machine David Woodward and pass-rush specialist Tipa Galeai are gone from the linebacking corps, and the Aggies have moved players to that position, namely Troy Lefeged Jr., to help out.

Lefeged was the Aggies’ leading tackler (104) last season at safety but is now getting a look at outside linebacker. So is former defensive end Nick Heninger, who tied Galeai for the team lead with five sacks a season ago.

Defensive end Justus Te’i is the only defensive lineman back that started every game last season, but the Aggies are counting on some newcomers to help out up front. UCLA transfer Marcus Moore should be part of the rotation right away even if he doesn’t claim the starting job at the other end spot, and junior college transfer James Hansen should help immediately, too.

On the back end, Utah State has to replace senior cornerbacks Cameron Haney and DJ Williams. Andre Grayson and Cameron Lampkin both saw playing time at the position last season, combining for two interceptions and eight pass breakups. Former Arizona State transfer Terin Adams should also factor in the competition there.

Senior safety Shaq Bond is back as leader of the secondary after leading Utah State with three interceptions last season, though the Aggies have to find a starter alongside him now that Lefeged has made the position change. The defense will be trying to improve after yielding more than 30 points a game last season and finishing in the bottom half of the league in most statistical categories.

Scarver, whose five career kickoff returns for touchdowns are tied for the ninth-most in NCAA history, gives the Aggies a legitimate threat on special teams, but Utah State has to replace another one in Dominik Eberle, who was one of the MW’s most consistent kickers last season with an 87.5-percent conversion rate on field goals.

It all makes the Aggies one of the league’s biggest wild cards heading into the new season.

Utah State At A Glance

THE LATEST: Utah State finished third in the MW Mountain Division last season and qualified for a bowl game for the third straight season.

LOVE IS GONE: QB Jordan Love was one of the league's most talented quarterbacks, but the Aggies are looking for his replacement after the Green Bay Packers took Love in the first round of the NFL Draft.

Cowboys turn the ball over four times in losing second in a row.

Wyoming running back Xazavian Valladay carries the ball as Utah State safety Troy Lefeged Jr. moves in for the tackle during their game last season in Logan, Utah. Lefeged is returning to the Aggies' defense after leading the team in tackles a season ago, though he's making the move to linebacker.