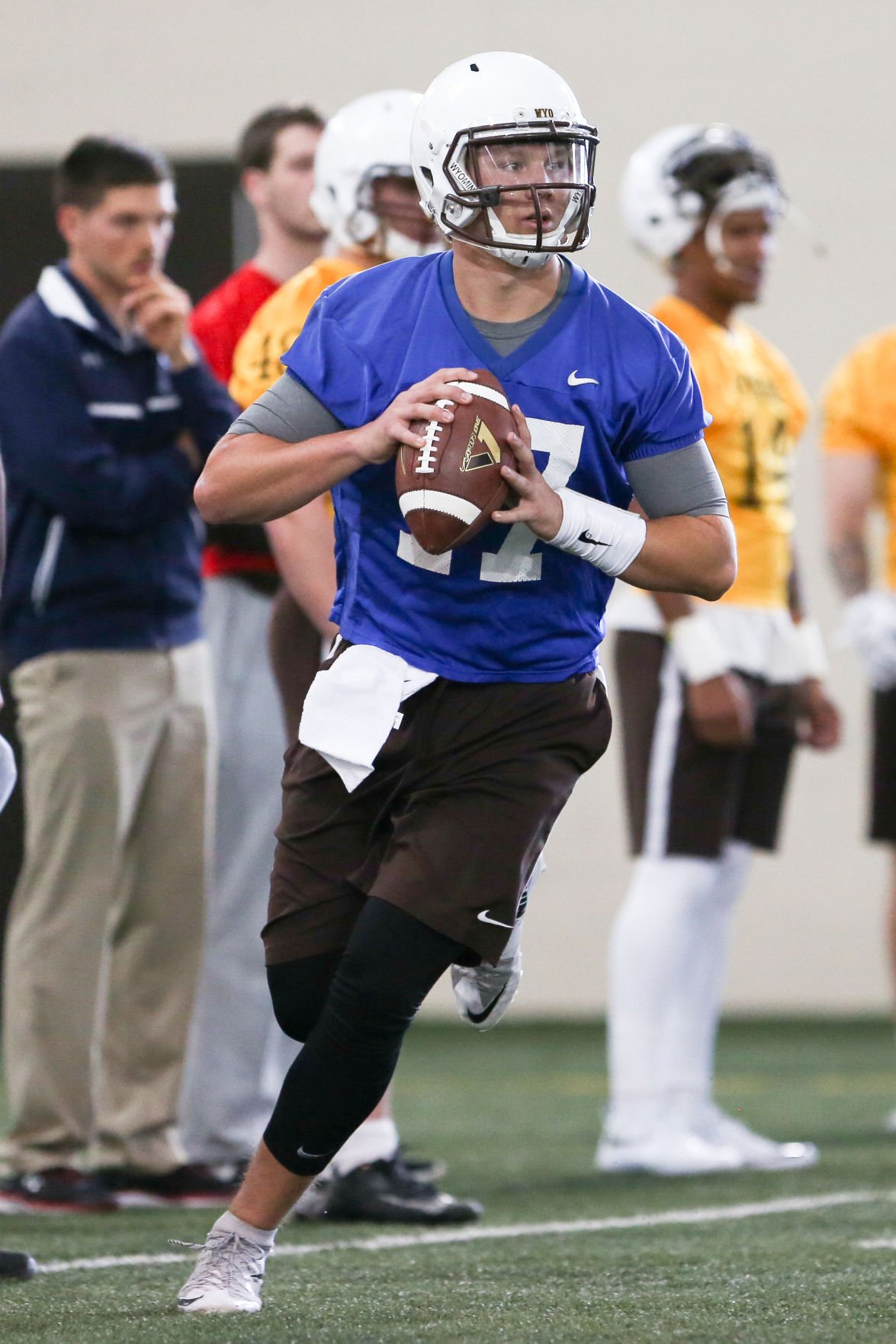 Quarterback Josh Allen (17) warms up with a few drills during the University of Wyoming spring football practice on Tuesday, March 22, 2016, inside the Indoor Practice Facility. 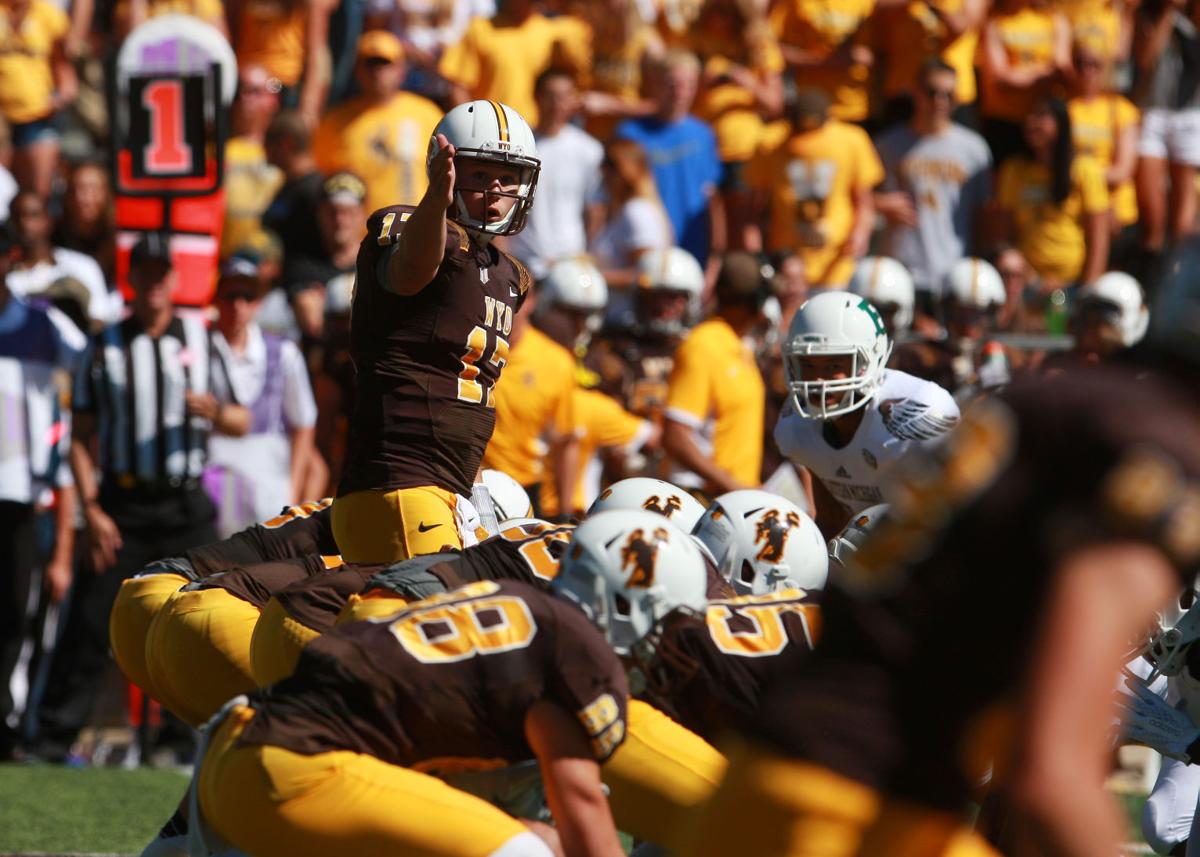 Wyoming quarterback Josh Allen sets up the offense against Eastern Michigan on Sept. 12, 2015 at War Memorial Stadium in Laramie. 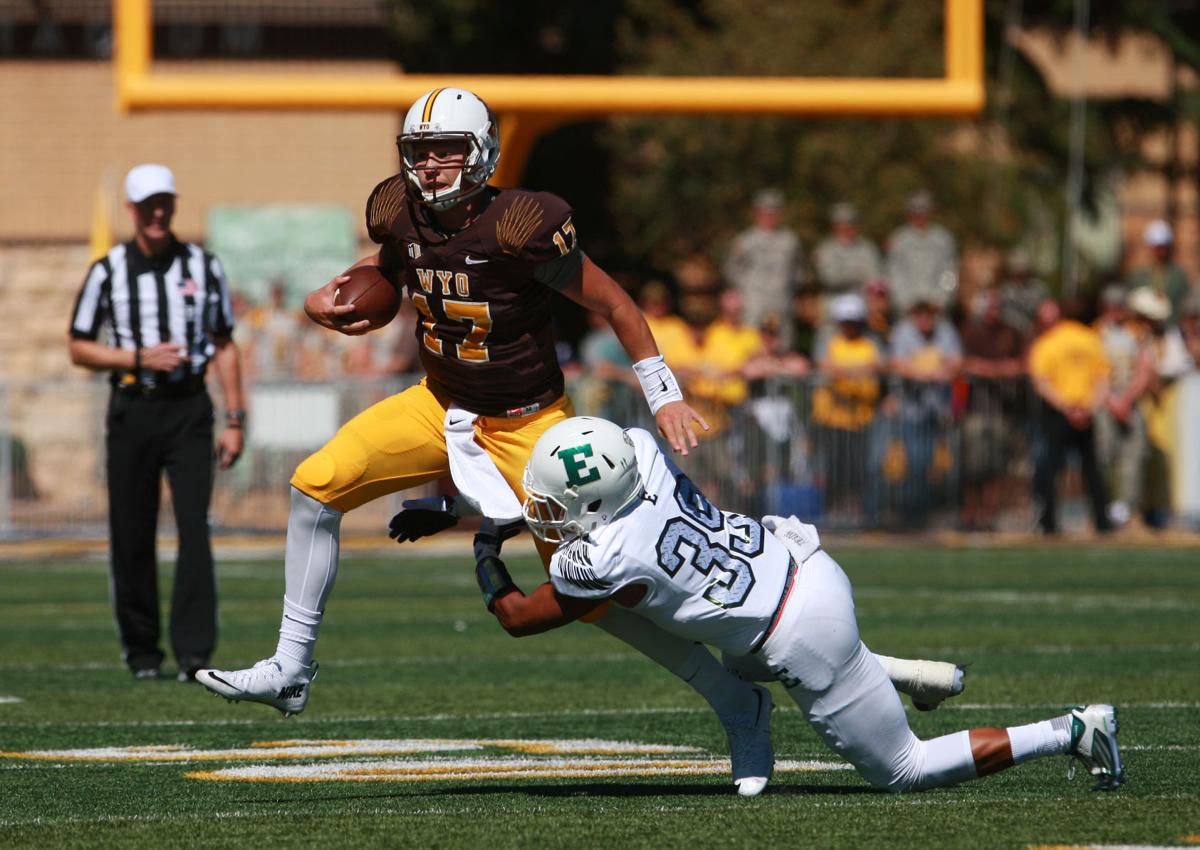 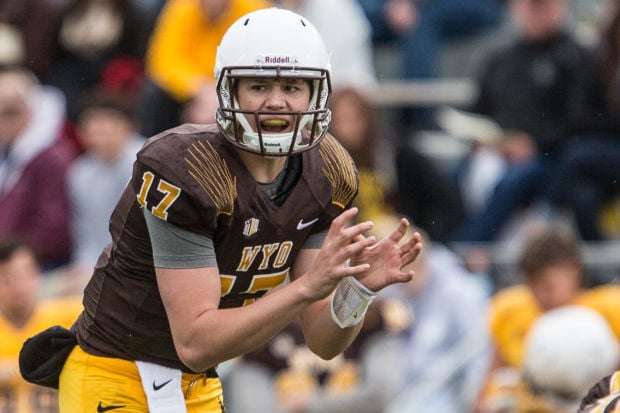 Josh Allen calls a play during the annual University of Wyoming spring football game on April 25, 2015, at War Memorial Stadium in Laramie.

An injury to senior Cameron Coffman thrust the 6-foot-5, 230-pound sophomore, who was primed to serve as Wyoming’s backup quarterback for 2015, into a starting role Sept. 12 against Eastern Michigan.

“Just going in there with all the excitement of starting your first Division I football game, it’s really something. It’s hard to grasp in the moment. You get on the field and your nerves are just going wild. You get that first snap and you just calm down. You settle down.”

Coming off a season-opening loss to North Dakota, Allen instilled a confidence — a perfect combination of swagger and self-belief — into the Cowboys’ offense that it had lacked the week before.

“He just brought a lot of energy to the huddle,” UW senior receiver Tanner Gentry said. “He was ready to play and got everyone else ready to play.”

But Allen’s first career start ended as abruptly as it had arrived.

He lasted 13 plays before suffering a broken right clavicle that ended his season.

Surgery and a few months of rehabilitation returned Allen to 100 percent.

Wyoming’s 15 spring practices, the first of which took place Tuesday, will afford Allen an opportunity to put his ability on display again.

Seven days after its second loss to a Football Championship Subdivision opponent in program history, Wyoming fans finally had something to clamor about: Allen.

So much for coach Craig Bohl’s grind-it-out, pro-style offense.

On his first series as starter, Allen needed just eight plays to drive the Cowboys 84 yards on their way to a 7-0 lead — their first of the year.

“I was definitely feeling very confident, and that comes from being prepared,” Allen said. “(UW quarterbacks coach Brent) Vigen did a great job with me that week. I just took a different focus once I knew Cam wasn’t going to be the guy that week.”

It showed again over his next four plays, as he marched Wyoming into Eastern Michigan territory again.

He fit the part: a tall, mobile quarterback with a big cannon for an arm.

It felt right to Allen.

Allen’s 13th play covered 24 yards on a scramble down the middle of the field.

It ended with a big collision, and it left Wyoming scrambling for depth at quarterback.

“I was running into him more than he was running into me,” said Allen, who completed 3 of 4 passes for 32 yards and ran for 40 yards on three carries in the game. “I just kind of moved my head to the side and his head went straight into that area where there’s no protection.

“I thought it was a stinger, thought it was a bruise. I got up and kind of moved it around and I knew something didn’t feel right, so I stuck my hand in my shoulder pads and I could feel my bones sticking out. I put my hand down, walked over to the sidelines and took a knee.”

After Allen left the game, Wyoming failed to score from first-and-10 on the Eastern Michigan 20-yard line. And then the Pokes gave up 38 unanswered points.

EMU won its first nonconference road game since the 1980s, and Wyoming eventually dropped to 0-6 for the first time since 1939.

All the while, Allen worked feverishly to return to the practice field.

By the first week of November, Allen could throw 40 yards in effortless fashion.

“We initially thought it was (broken in) two or three places,” Allen said. “When I went in for surgery, the doctor said I broke it in seven places. So I’ve got eight screws and a plate in there now. It doesn’t bother me at all to throw. It’s definitely back to 100 percent health.

“I’m not really sure (why I recovered so quickly). Dr. (Mark) McKenna was a little amazed at how quickly my collarbone was healing.”

It allowed Allen to return to practice for the final three weeks of the season, even though he wouldn’t be used in order to keep his medical hardship waiver request intact.

With that extra year of eligibility, Allen’s injury could be viewed as a blessing in disguise. But it doesn’t take away the pain of regret, or more accurately, the pain of what might’ve been.

“I’d definitely like to think that’s what would’ve happened if I would’ve stayed in, that we would’ve been able to keep the offensive success going and whatnot,” Allen said. “You can’t tell. You can’t go back and see. You just take it with a grain of salt. I’ve got to prepare harder now."

Added Vigen: “He was on a nice trajectory leading into him getting injured last fall. You can’t worry about where that trajectory would’ve went, but it’s nice to get him back on track. He was back with us a little bit at the end of the season, so you knew that he would be healthy and ready to go (this spring).”

Allen can’t explain why he can throw with such velocity.

“I don’t know what it is,” he said. “I’m not the biggest guy and I can’t lift the most, but there’s just something in my mechanics that I just grew up throwing the ball. I feel like that correlated into arm strength. I don’t know.”

But one thing is clear: Allen can really throw with velocity.

It’s something his teammates have never seen elsewhere.

“I swear, when he throws the ball, smoke will come out,” senior running back Shaun Wick once said. “It’s unreal.”

Said Gentry: “There’s times when we have to tell him to not throw it so hard because none of us can get to the ball. But it’s nice to have someone that can sling it like that.”

Allen needs to improve in many of the same areas as did Wentz, who many have dubbed the top quarterback prospect for the 2016 NFL Draft.

“Arm strength-wise, I think there’s a lot of comparison between the two,” Vigen said. “I know going back to Carson’s progression as a quarterback, he kind of went through that same deal: What can you get away with? What should you be able to get away with? And really at the end of the day you have to trust your timing, so that’s trusting your feet and knowing I shouldn’t make deep throws late, just having that as a constant reminder. Ultimately, you force yourself to trust your timing. And that’s what it has to come down to, and it’s not there yet, but we have to get to that point for sure for Josh.”

On his first depth chart of the spring, Bohl listed his starting quarterback as either Allen or fellow redshirt sophomore Nick Smith, who ended 2015 fall camp behind both Coffman and Allen.

And that’s been a welcomed sight for Allen.

“It’s definitely a competition, and I wouldn’t want it any other way,” he said. “Competition makes people better. If I can push Nick and Nick can push me, that just makes it all the better. Just taking every rep with the first team not for granted, making sure I execute well and am able to put the right reads in.”

Allen is still somewhat raw and inexperienced at the FBS level. But, albeit briefly, he’s already shown the ability to lead Wyoming to success.

And so the Eastern Michigan game, and even this spring, could be just the beginning.

“... While he got some experience last fall camp and the first couple weeks, that was certainly cut short, so we’ve got some making up to do this spring for sure.”

BACK TO BUSINESS: Allen started against Eastern Michigan on Sept. 12 in place of injured senior Cameron Coffman. He led two impressive drives before suffering a broken right clavicle, which ended his season. Now he's back at 100 percent for spring drills.

HE SAID IT: "He was on a nice trajectory leading into him getting injured last fall. You can’t worry about where that trajectory would’ve went, but it’s nice to get him back on track." — UW offensive coordinator and quarterbacks coach Brent Vigen

THURSDAY: Wyoming will hold its second of 15 spring practices.

True freshman went from walk-on to one of the top placekickers in the Football Bowl Subdivision.

Quarterback Josh Allen (17) warms up with a few drills during the University of Wyoming spring football practice on Tuesday, March 22, 2016, inside the Indoor Practice Facility.

Wyoming quarterback Josh Allen sets up the offense against Eastern Michigan on Sept. 12, 2015 at War Memorial Stadium in Laramie.

Josh Allen calls a play during the annual University of Wyoming spring football game on April 25, 2015, at War Memorial Stadium in Laramie.