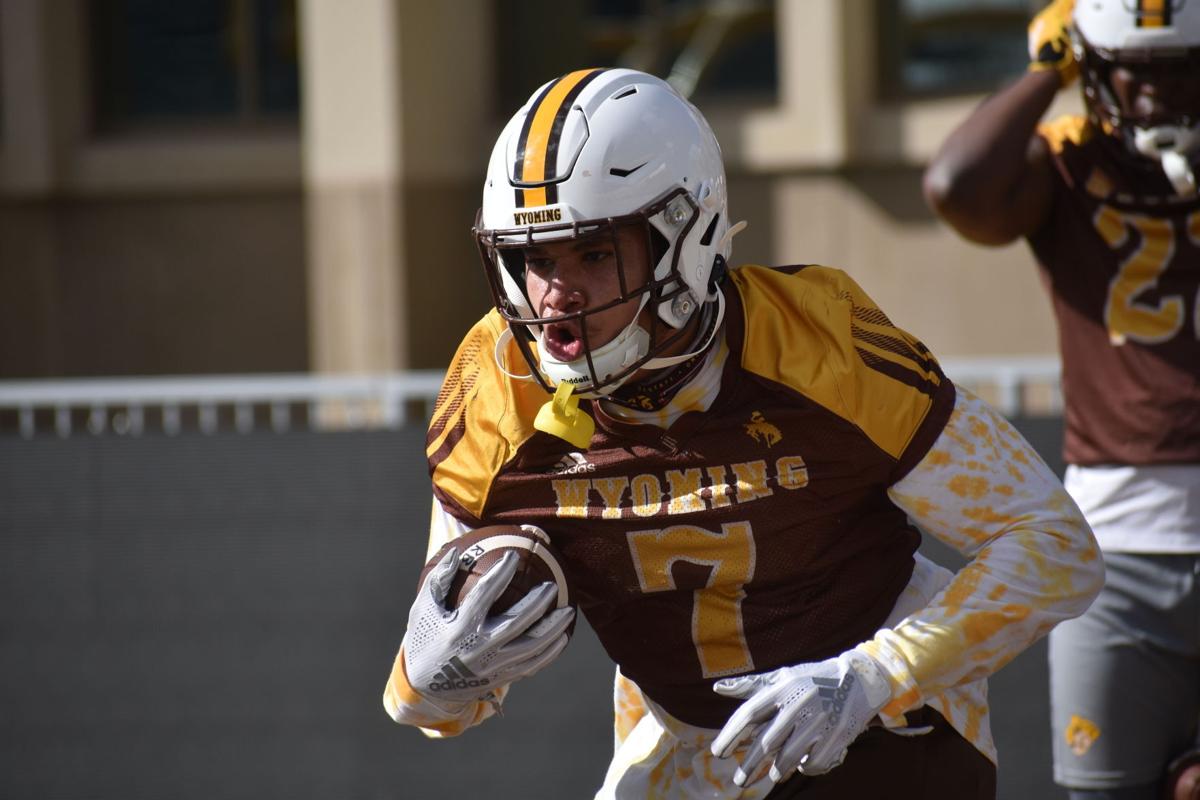 Wyoming running back Trey Smith runs through a drill during spring practice April 8 at War Memorial Stadium in Laramie. Smith is entering his seventh year in college with hopes of still making it to the NFL. 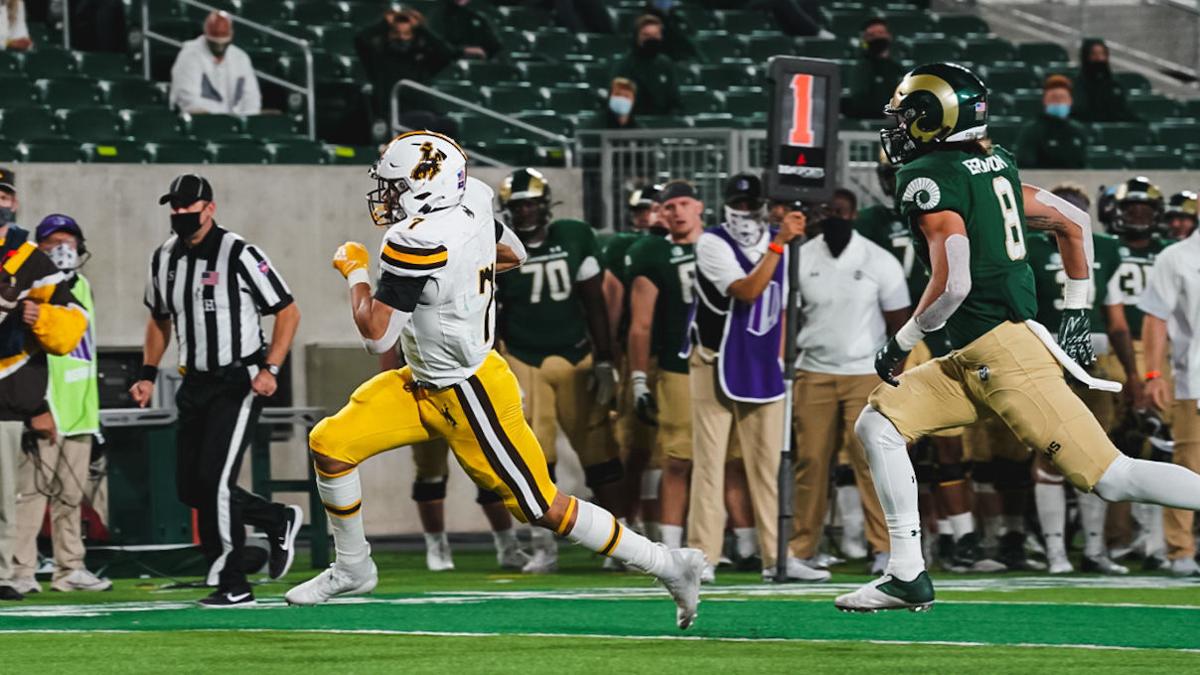 LARAMIE — Trey Smith can’t say he ever expected this.

After signing with Louisville six years ago out of Madison Central High School in Mississippi, Smith’s initial hopes weren’t much different than those of many other Division I football players: Three years and then off to the NFL. Even when Smith arrived at the University of Wyoming in 2019 as a graduate transfer, he expected it to be a one-year pit stop before moving on.

Two years later, he’s still at UW as a 25-year-old running back embarking on his seventh collegiate season. He’s easily the oldest player on UW’s roster, and his teammates rarely pass up an opportunity to remind him of that, though Smith said he’s used to the good-natured ribbing at this point.

“Everything I hear, I hear my age brought up in some form or fashion, so I just embrace it and try to disburse all my wisdom to all the young guys,” Smith said. “I just look at it from a positive aspect.”

Smith said it hasn’t always been that easy to take things in stride, particularly when it comes to pursuing his ultimate goal of continuing his family’s lineage in the NFL. His father, Jimmy Smith, played 13 seasons in the league and was an All-Pro receiver for the Jacksonville Jaguars in the late 1990s.

The younger Smith admitted it was a tough pill to swallow watching younger teammates at Louisville pass him by in a shorter amount of time while he was buried on the depth chart. Following a redshirt year, he got just 82 carries in three seasons with the Cardinals before leaving for UW after the 2018 season.

“I feel like I was kind of getting left behind for a while,” Smith said. “That just made me more motivated.”

What Smith thought would be his lone season in Laramie lasted just four games after an ankle injury against Tulsa in September of 2019 cut it short, but Smith received a medical hardship waiver granting him a sixth year of eligibility. He used that last season, but Smith got another unexpected chance to extend his eligibility when the NCAA gave all fall student-athletes a free season amid the uncertainty of the coronavirus pandemic last year.

Smith’s age combined with the typically short shelf life running backs have in the NFL left him with a more pressing decision than other college seniors at his position. From 2010-2014, the average tenure of a running back no longer in the league was 5.2 years, according to The Washington Post. And heading into the 2020 season, more than half of the NFL’s 32 starting running backs were Smith’s age or younger, though he said all he’s looking for at this point is a chance to make a roster.

“That’s still my No. 1 dream since I was a young child,” Smith said. “Just trying to follow my dad’s footsteps and try to be better than he was in the league. Hopefully I get that opportunity.”

By the time next year’s NFL Draft rolls around, Smith will be 26. He’s not naive to the fact his age may give pause to some teams at the next level. But after consulting with his father, Smith decided to put it off one more time.

“He was like, ‘If you perform, then the age really doesn’t matter,’” Smith said. “He played well into his 30s, so I just keep that mindset. I’ve just got to take care of my body, which I’m doing a great job of right now. I’m feeling great, better than I ever have before.

“I just have to take my dad’s advice and just throw away all of that anger of trying to get to the NFL early in my 20s. Because at the end of the day, age is just a state of mind. I love playing this game, and I want to play it as long as I can at a high level.”

Plus, there’s unfinished business Smith feels like he needs to handle before leaving UW. He’s on track to receive his master’s degree in American Studies in December, which is another reason why Smith wouldn’t have believed anyone who told him he’d still be in college in 2021.

Smith is the first to admit he’s never been crazy about the student part of being a student-athlete. But as a graduate student, Smith has had to maintain a 3.0 grade-point average to be eligible to play, which he said he’s done thanks to more effort and focus academically.

“We vetted Trey quite a bit,” UW coach Craig Bohl said. “And sometimes when guys come in and transfer, it’s a good solution. Other times, it’s not. So we tried to do a lot of things on the front end. He’s been very, very open about his desire to play in the NFL. His father played in the NFL. But it’s been encouraging, too, that he’s taken advantage of his time here academically and really done well in school.”

On the field, UW’s latest season left a sour taste in Smith’s mouth. The Cowboys had their first losing season since 2015, which included their first Border War loss to rival Colorado State since that season.

Smith wants to be part of engineering a turnaround, and a full season’s worth of contributions should help not only the Cowboys but also his draft prospects. Between his injury-shortened season and the pandemic limiting UW’s season to six games last fall, Smith has only played in 10 games during his time at UW.

Last season was his most productive in college. As part of a rotation with all-conference back Xazavian Valladay, the 6-foot, 213-pounder averaged 5.5 yards on 88 carries and scored five touchdowns. He showed the ability to carry the load if needed when Valladay went down with his own leg injury late in the season, putting together back-to-back 150-yard games against UNLV and New Mexico.

Smith is still going to share carries this fall with Valladay, who’s back for his fifth season. Titus Swen, UW’s third-leading rusher as a freshman in 2019, is also back in the mix after opting out last season, but Smith again sees a positive in the situation. Not only could having all options available help keep him healthy, but he also acknowledged it can maximize the backfield’s production.

There are also other ways Smith could get involved in first-year coordinator Tim Polasek’s offense.

“I feel like my role is just whenever I step foot on the field, whether it’s blocking for X or blocking for whoever gets the ball, make sure I get my block in and create alleys for other people,” Smith said. “And whenever it’s my turn to run the ball, I’ve got to do damage. I’ve got to make each carry count.”

So does that mean there are times Valladay and Smith will be on the field simultaneously?

“I’m not going to give that away, but it’s very possible,” Smith said. “Anything can happen. It’s going to be a lot of surprises.”

Smith said he wants to display more versatility for NFL teams in hopes of increasing his chances of landing with one of them a year from now, but he recently showed some of them that he’s got plenty of speed for the position. Back in March, Smith and some of UW’s other 2022 draft hopefuls worked out for a handful of scouts at UW’s indoor practice facility, where Smith said he ran the 40-yard dash in 4.5 seconds flat.

“I know he’s a little bit older, but I think he’s got a long shelf life.”

If the NFL doesn’t come calling, Smith said he’ll likely stay involved in the game in a coaching or scouting capacity, but he’s used to making the future wait. Smith isn’t exactly in a rush to leave a place he’s grown fond of over unexpected time.

“I just love being here and playing here for this great town, these great people and a great team,” Smith said. “We just have a great overall renewal for toughness, Cowboy tough, so I just love being a part of that and this foundation.”

ONE LAST TIME: RB Trey Smith is back for his third and final season at Wyoming. This fall will be his seventh collegiate season after he started his career at Louisville.

BEST WAS LAST: Smith ran for 488 yards and five touchdowns on 88 carries last season, all career-highs.

HE SAID IT: "At the end of the day, age is just a state of mind. I love playing this game, and I want to play it as long as I can at a high level." -- Smith.

Wyoming running back Trey Smith runs through a drill during spring practice April 8 at War Memorial Stadium in Laramie. Smith is entering his seventh year in college with hopes of still making it to the NFL.