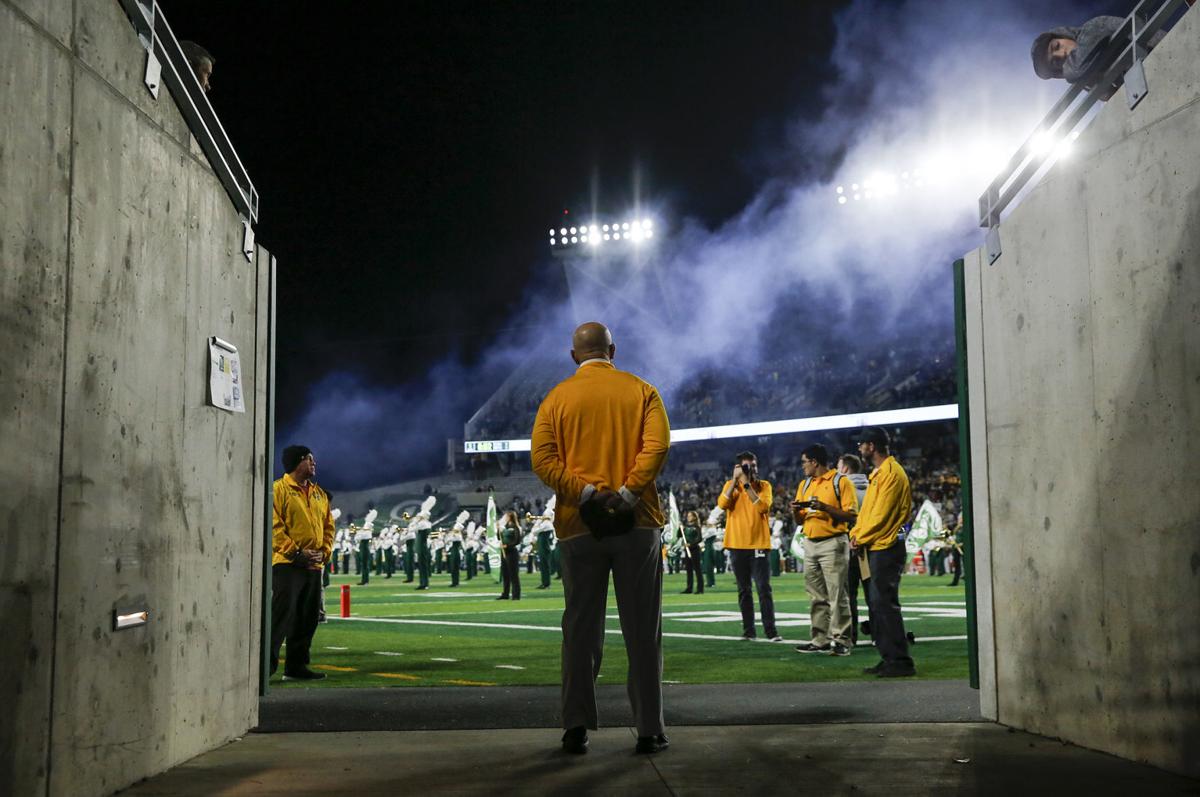 Wyoming head coach Craig Bohl steps out onto Canvas Stadium before the Cowboys' game against Colorado State on Oct. 26, 2018 in Fort Collins, Colorado. The rivals will play on Friday again this coming season in Laramie as part of the Mountain West's national television package. 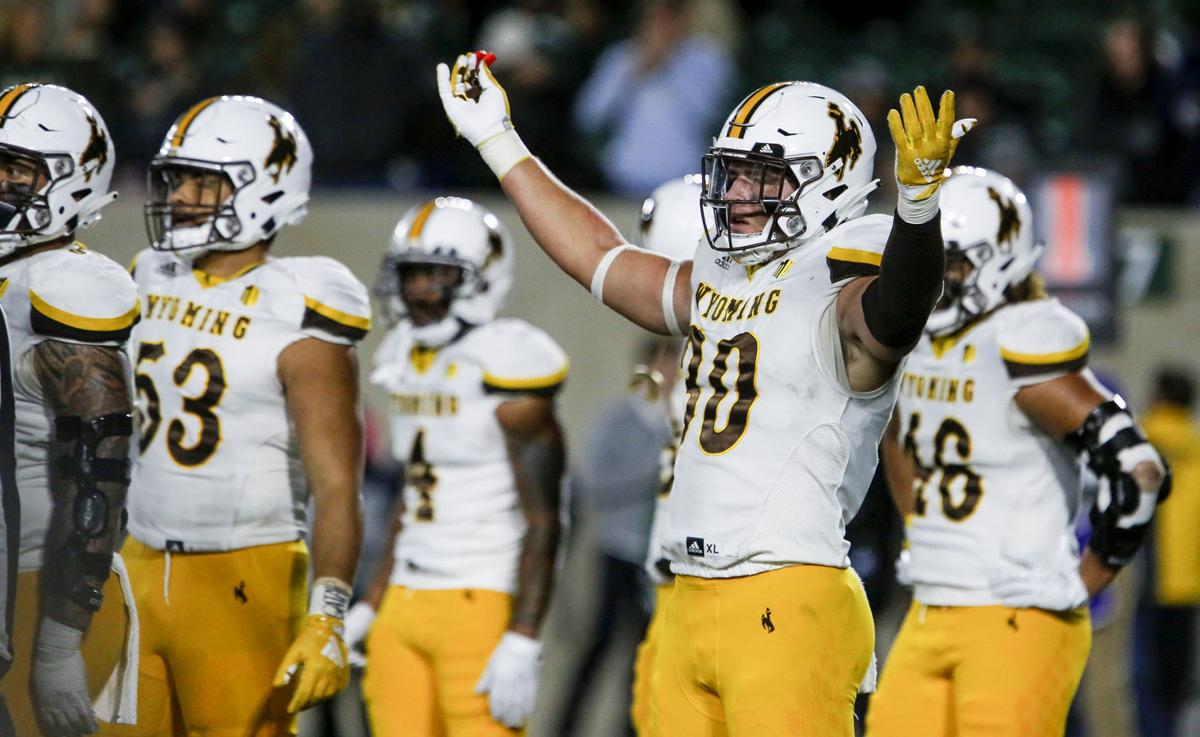 Wyoming linebacker Logan Wilson reacts after a call by a referee during the Cowboys' game against Colorado State last season at Canvas Stadium in Fort Collins, Colo.

LARAMIE — Tom Burman knew it was coming, though he didn’t have to like it.

Shortly after the Mountain West’s annual spring meetings in Arizona earlier this month, the league’s national television schedule for the upcoming football season was released. With that came the news that Wyoming’s Border War matchup with rival Colorado State had been moved to Nov. 22 at War Memorial Stadium.

It’s a primetime 7:30 p.m. slot on ESPN2, but in order to draw a national television audience, the game will now be played on a Friday for the second straight year. For the majority of season ticket holders not already living in Laramie or just down the road in Cheyenne, that means a multi-hour drive that would require leaving work early or taking the full day off if they want to make it in time for kickoff.

Burman said he understands the dilemma. He even apologized for it. But Wyoming’s athletic director also knows it could’ve been worse.

“I wasn’t happy,” Burman said. “We almost ended up with two Friday night games at home. We did not, thank goodness. That’s a real disadvantage when your fan base travels so far.”

It’s the reality of every school in the Mountain West since they are included in the revenue stream that comes from the league’s television contract. Everybody gets an annual cut of $1.1 million as part of a contract in which CBS Sports and ESPN are the main players.

The contract puts the schools at the mercy of the networks when it comes to game times and dates. CBS, which picked up Wyoming’s Aug. 31 opener against SEC foe Missouri as well as the Cowboys’ home conference game against UNLV on Sept. 28, has long been the MW’s primary rights holder and gets the first pick of games it wants to televise followed by ESPN, which will televise Wyoming’s games at San Diego State (Oct. 12), Boise State (Nov. 9) and Utah State (Nov. 16) on its family of networks.

Start times for just three of Wyoming’s games have been announced so far, but the Cowboys’ 5:30 p.m. kick against Missouri is the only one of those that’s starting earlier than 7 p.m. local time. The San Diego State game won’t kick until 8:30 p.m. in the Mountain time zone.

“Do (the networks) work with us? Yes, to a point,” Burman said. “Game times, there’s a little bit of movement you can press, but you can probably only play that card once a year.”

The TV revenue is chump change compared to what the Power Five conferences are raking in. The payout to schools in the SEC, Big Ten, Big 12, ACC and Pac-12 are in the tens of millions. Even the American Athletic Conference, a fellow Group of Five member, upped the ante earlier this year by agreeing on a 12-year contract with ESPN that will net roughly $83 million per year — approximately $7 million per school — beginning in 2020.

But a majority of those schools have budgets that creep into the hundreds of millions — far exceeding what schools in the MW can spend — while the AAC is home to a handful of major media markets, including Houston, Philadelphia (Temple), Dallas-Fort Worth (Southern Methodist University), Tampa-St. Petersburg (South Florida) and Orlando (Central Florida). Wyoming’s athletic department budget is approximately $40 million with Burman estimating that number ranks in the middle of the pack in the league.

The question looming for each MW school is with no big-name schools and few major media hubs, is it realistic to expect that slice to get bigger in the future? Could it even get smaller?

The league is in the process of negotiating a new TV contract with its current one set to expire next summer. CBS Sports opened an exclusive negotiating window in April. The MW could then engage in renewal discussions with ESPN and AT&T SportsNet and talk to other networks after that.

One school that won’t be affected as much as the rest by the outcome is Boise State. The BCS-busting Broncos were appealing to other conferences looking to expand five years ago and were all but set to join the Big East. In an effort to keep Boise State from bolting, the MW gave the school the power to create a TV deal separate from the league that nets it an additional $1.8 million annually out of the conference’s pockets.

Burman said the league is weighing all of its options for the new contract as it tries to get more money for the rest of its members, too.

“Everything is on the table from all the traditional outlets from CBS, ESPN, FOX, NBC, and then there’s all the digital options that are available now,” said Burman, who serves on a committee that will consider network offers and run them by the rest of the league’s athletic directors before recommendations are made to school presidents and chancellors.

One way to ensure more revenue would be to follow the AAC’s lead and agree on a lengthier deal, though Burman said he’s opposed to that because of the uncertainty of how people will be consuming their sports five years from now. Younger generations are already cutting the cable cord and turning to streaming services that offer those digital platforms such as ESPN+ and Stadium.

“I think that puts us at a competitive disadvantage,” Burman said. “(The AAC) has done a really good of branding themselves, and they’ve performed. But we have a lot to sell, so I think we’re going to see significant growth. There was a time two years ago that I was worried about the future of television just because everybody was unplugging. Sports is still an important asset for these media companies, and we’re going to get paid more than we are. We have to.”

Budgets will almost certainly be larger in a decade while TV rights could also be worth more by then, another reason other athletic directors don’t see the league locking itself into a long-term deal.

“That’s what blew me away, that 13 years from now they’re still going to be getting $7 million per school knowing what things cost today and what they might cost in 13 years,” SDSU athletic director John David Wicker told the San Diego Union-Tribune last month in reference to the AAC’s contract. “I would be surprised if we got locked into something like that. I think that’s too long.”

In response to questions from the Star-Tribune as to how long of a contact the conference may be seeking or how long negotiations are expected to last, MW Commissioner Craig Thompson said in a statement the league will not comment on negotiations "until such a time as we are prepared to make an announcement." Burman said he would be “shocked” if a new contract wasn’t announced early this fall.

In the meantime, Wyoming and the rest of the member schools have a decision to make: take less money and give themselves more control over start times or strike as lucrative a deal as possible and leave it fully in the hands of the networks. Even if means playing on Friday night, being placed into a primetime slot by a network comes with a level of national exposure that many of these schools wouldn’t otherwise get.

At Wyoming — a program that does almost all of its recruiting outside the state given its small population and lack of FBS-level talent — it’s particularly important.

“If you don’t have games on television,” Burman said, “you’re not going to recruit.”

A solution that pleases everybody is going to be hard to find. It may be more about finding the right amount of give and take at this point.

“It’s what we signed up for in college athletics,” Burman said. “We’ve been able to keep the numbers down, but many schools are playing one to two of those (weekday games) a year in the Mountain West. We don’t want to do that. We recognize this disadvantages our ticket buyers, and at the end of the day, we’re in the business of trying to make them happy. But you’ve got to balance television, recruiting, ticket sales, all of it.”

LARAMIE -- Wyoming's rivalry game against Colorado State next season will be played in front of a national television audience.

LARAMIE — Players, coaches and media members will convene at the Green Valley Ranch Resort in Henderson, Nevada, this week for Mountain West M…

FOX takes ESPN's place as one of two of the league's primary rights holders.

Wyoming head coach Craig Bohl steps out onto Canvas Stadium before the Cowboys' game against Colorado State on Oct. 26, 2018 in Fort Collins, Colorado. The rivals will play on Friday again this coming season in Laramie as part of the Mountain West's national television package.

Wyoming linebacker Logan Wilson reacts after a call by a referee during the Cowboys' game against Colorado State last season at Canvas Stadium in Fort Collins, Colo.