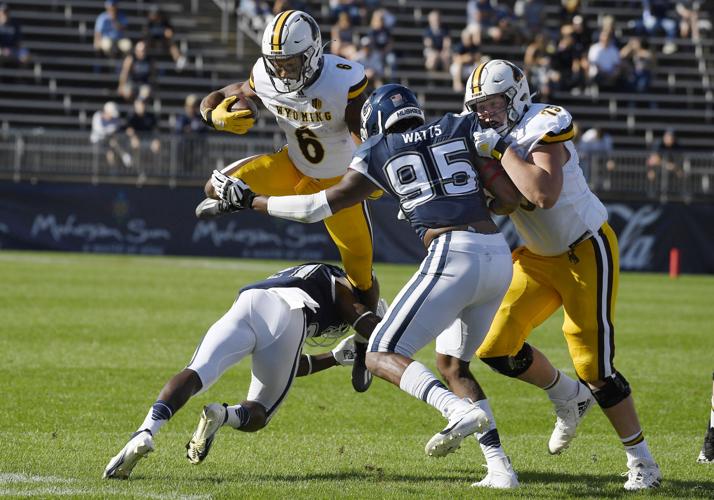 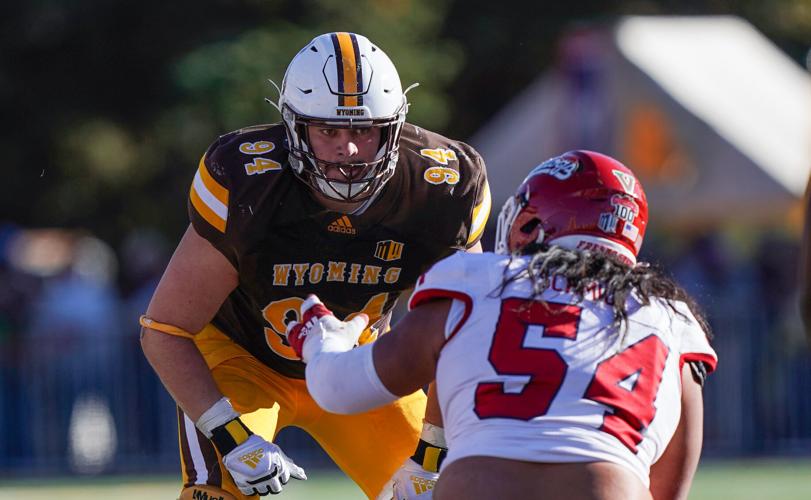 LARAMIE – Wyoming is only four weeks away from opening the 2022 season.

The Pokes put the pads on for the first time during Friday’s fall camp practice as preparation for the Aug. 27 game at Illinois continues to ratchet up.

“It was pretty aggressive,” UW head coach Craig Bohl said. “I really was pleased with our first offensive line. I thought they probably executed, it was significantly better than the twos. Encouraged with that.”

The offensive line will be led by Eric Abojei, who has moved from left guard to left tackle, and Frank Crum, who is entering his third season as the starting right tackle.

Sophomore Nofoafia Tulafono has taken over the starting center spot with Latrell Bible’s decision to leave the team. Junior Zach Watts and redshirt freshmen Emmanuel Pregon and Jack Walsh are the leading candidates to start at the guard positions.

Bohl said one of the key position battles during camp will be finding a reliable backup behind the two pillars on the line.

“We’re developing a couple prospects at offensive tackle for depth,” Bohl said. “We need to find a third guy behind them.”

Bohl has mentioned the first-string O-line as a unit performing well a couple times during the first three post-practice interview sessions, but that doesn’t mean the coach isn’t pleased with the progress on the defensive line.

Nose tackle Cole Godbout and defensive tackle Jordan Bertagnole are two of the best interior linemen in the Mountain West and will be in the mix to be team captains.

“For us to generate some pressure with our down guys is going to be important. We can’t (just) continue to stunt,” Bohl said. “I’m confident that we’re going to see some more productivity from that spot, which we’ll need.”

The roster attrition has been well documented with 15 players entering the portal and nine transfers arriving since the end of the 2021 season.

Bohl had to hire two new assistants, defensive tackles coach Oscar Giles and offensive line coach Joe Tripodi, but both coordinators are back.

“It helps us a lot,” Bohl said. “As a head coach, if you’re a CEO head coach, that really means a lot. For those guys to know the program is really important, to know the players. Much more of a comfort zone.”

“The level of intensity certainly was different.” — Bohl.

FRIDAY: Wyoming's third practice of fall camp was its first with the pads on.

O-LINE STANDS OUT: UW head coach Craig Bohl has been impressed with the work of the offensive line early n camp.

HE SAID IT: “I really was pleased with our first offensive line." -- Bohl.

Chevan Cordeiro, who led Hawaii to a blowout win over Wyoming last season at War Memorial Stadium, returns to Jonah Field in October after transferring to San Jose State.

Quarterback battle, improved locker room vibe were on display as the Pokes conducted their first practice of fall camp Wednesday.

New Nevada coach Ken Wilson inherits the least-experienced team in the FBS after Jay Norvell left for Colorado State and took a chunk of the Wolf Pack roster with him.

Following a jarring winter of roster turnover, the young Pokes return to practice in Laramie looking to exceed low outside expectations.

The Aztecs could be a candidate to join the Pac-12, but Brady Hoke is focused on winning the Mountain West after last year's disappointing loss to Utah State.

The Cowboys' defensive line won the day, but Monday's practice was designed to put the offensive line and quarterbacks under duress.

Boise State head coach Andy Avalos believes Hank Bachmeier's experience at quarterback and improved depth on the defensive line will lead to a bounce-back season after a 7-5 finish in 2021.