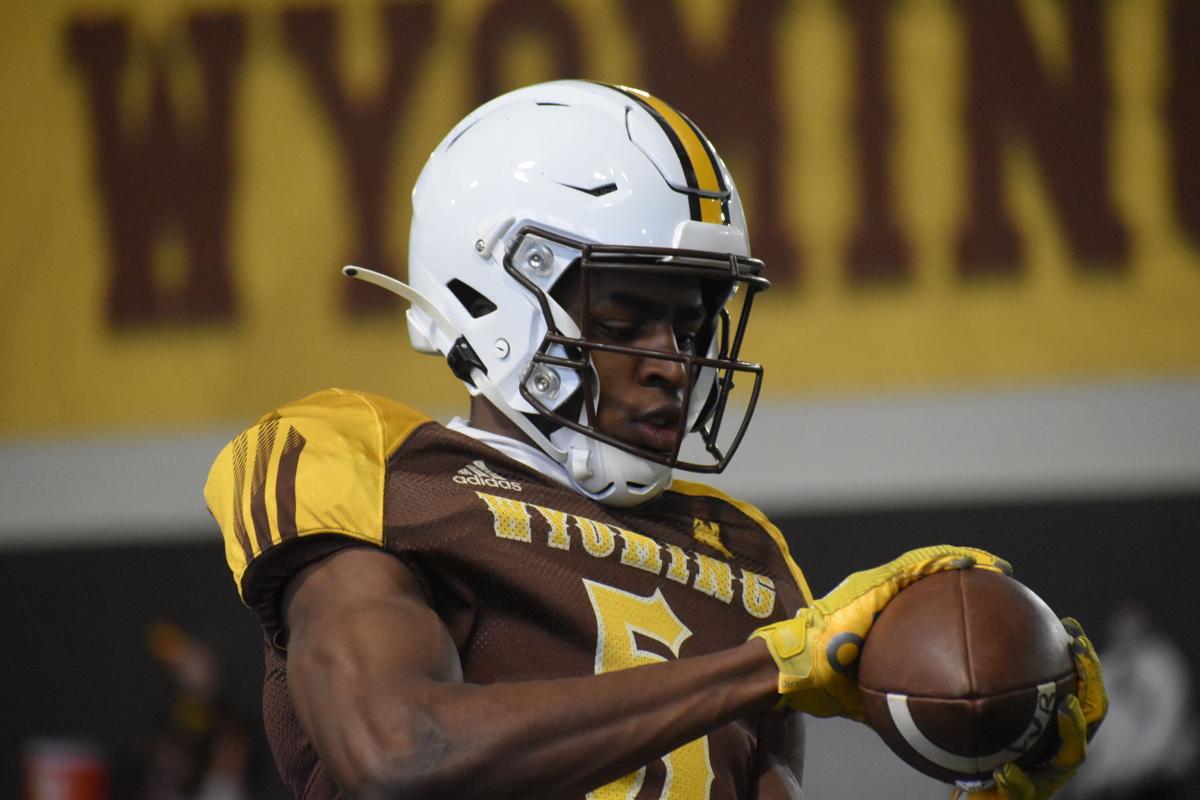 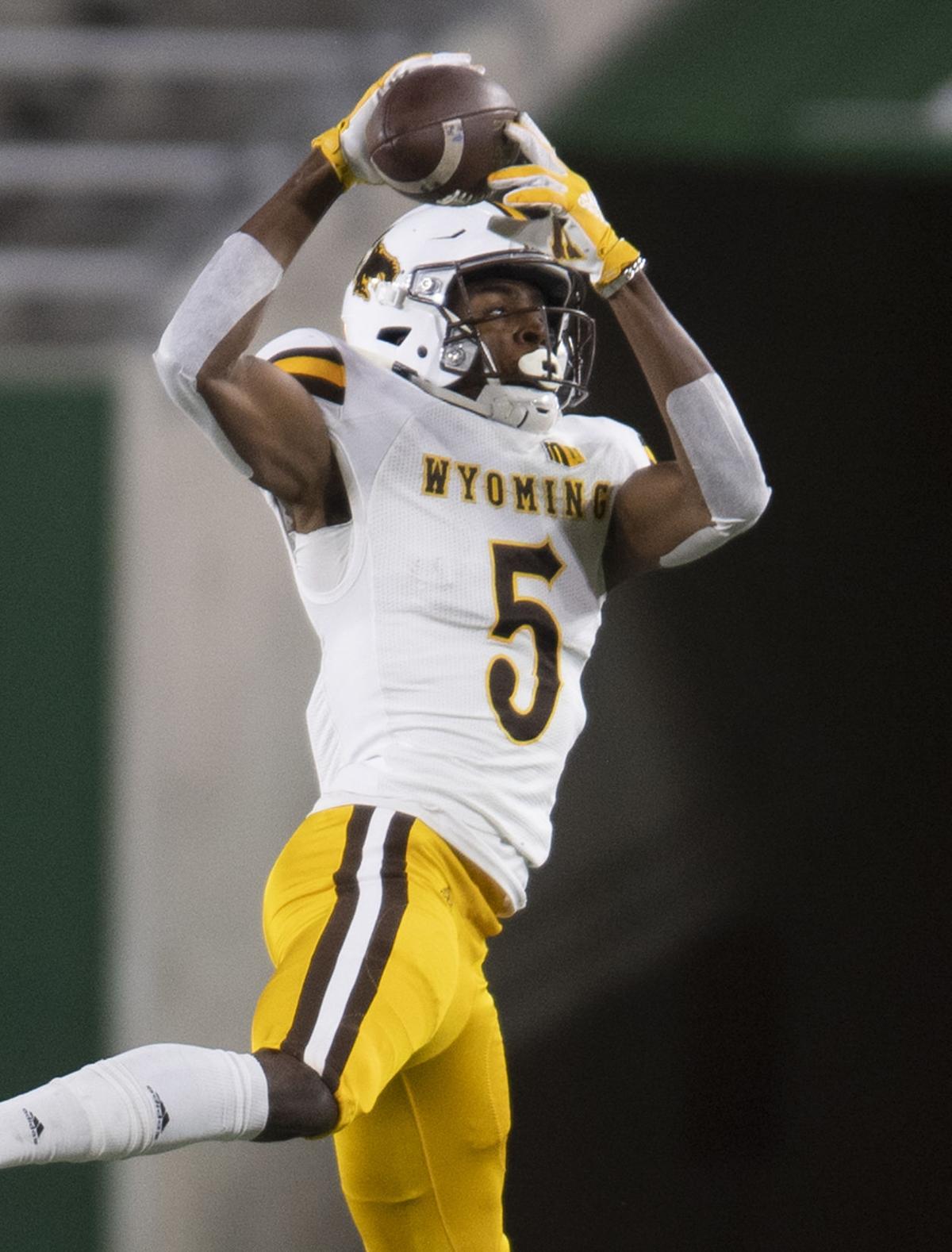 His first collegiate catch was a deep ball in which the 6-foot-3, 210-pound receiver jumped to extend over bracket coverage from Nevada’s Tyson Williams and Jojuan Claiborne, fending off both defenders to haul in the 45-yarder. Defenses didn’t contain him much from there.

A redshirt freshman last season, Neyor burst onto the scene as the Cowboys’ most lethal vertical threat on the rare occasion when UW’s run-heavy offense was able to take advantage of defenses’ aggressiveness over the top. Neyor averaged a whopping 31 yards per catch on his way to all-Mountain West honorable mention honors, which was on pace to lead all Football Bowl Subdivision wideouts.

Problem was, Neyor only caught eight balls all season, which wasn’t enough for him to qualify among statistical leaders. Still, his big-play ability quickly earned him a certain reputation.

“I think he’s the best deep-ball receiver in the country. The numbers don’t lie,” fellow receiver Ayden Eberhardt said. “And if he’d had a couple more catches here or there, then he would’ve been in (the running). I think that’s pretty obvious.”

Neyor’s explosiveness wasn’t limited to the air. He hauled in a 54-yard bomb against New Mexico, too, but UW dialed up some trickeration later in that game with an end around for Neyor. He turned his lone carry of the season into a 58-yard gallop.

His knack for big plays has carried over into the spring. As part of UW’s punt return team, Neyor broke through to block a punt during the Cowboys’ first scrimmage last weekend. Neyor said he’d missed a couple of back-to-back chances at a block during practice leading up the scrimmage.

“So I was like, ‘Dang.’ I had to go back and get it,” Neyor said. “Scrimmage time came, I got my start right and got the punt blocked.”

But Neyor’s primary focus this spring has been on rounding into a more complete receiver. While using his size and athleticism to go deep against smaller defensive backs has always been his specialty — “That’s something I’ve been doing since high school,” he said — Neyor is out to show there’s versatility to his game.

“Overall, just working on the little things,” Neyor said. “Working on the quick game passing, being more complete and running with the football. Being the best I can possibly be all-around.”

Neyor is one part of the equation when it comes to his success in the passing game. Another is quarterbacks Sean Chambers and Levi Williams, who coaches insist are still deadlocked in competition to be the starter.

UW coach Craig Bohl has given varying assessments of the quarterbacks’ touch and accuracy throughout the spring as the Cowboys work to improve a passing game that’s been among the least productive in the country in recent years. But as far as the chemistry between the quarterbacks and receivers, Neyor said it’s much more in sync 11 practices into the spring.

UW will hold its second scrimmage Saturday, the final one before next weekend’s spring game.

“Things kind of started off a little slow,” Neyor said. “The chemistry wasn’t really there, but as time went along, we worked through that. Things have been getting better. I’ve noticed a lot of improvement in both of those guys.”

Neyor, whose name has been consistently brought up by coaches and teammates as a receiver who’s stood out this spring, is already a veteran among the group in a way. Despite having just those eight catches to his name so far, they’re tied for the second-most of any wideout on UW’s roster.

With the strides Neyor has already made this offseason, Eberhardt said he expects the youngster to take another step in his development come this fall.

Neyor said the offense as a whole is getting more comfortable with first-year coordinator Tim Polasek’s system. The Cowboys’ pro-style offense figures to be more multiple and aggressive under Polasek than it was under former coordinator Brent Vigen, which could lead to more passes coming the receivers’ direction than in years past.

At least that’s the hope from Neyor, who admitted the lack of passes thrown his way given his level of production last season was frustrating. He intends to be a bigger threat from any spot on the field.

“As far as this year, just looking forward to getting in the mix more and making more plays, doing what I can and playing my game,” Neyor said. “As long as I feel like I’m doing what I can do to help contribute to the team’s success, that’s all that matters.”

SPRING FOCUS: The focus for Neyor this spring has been to become a more complete wideout.

HE SAID IT: "I think he’s the best deep-ball receiver in the country." -- WR Ayden Eberhardt on Neyor.

There's experience out wide, but only one receiver still on the Cowboys' roster has more than eight career receptions.