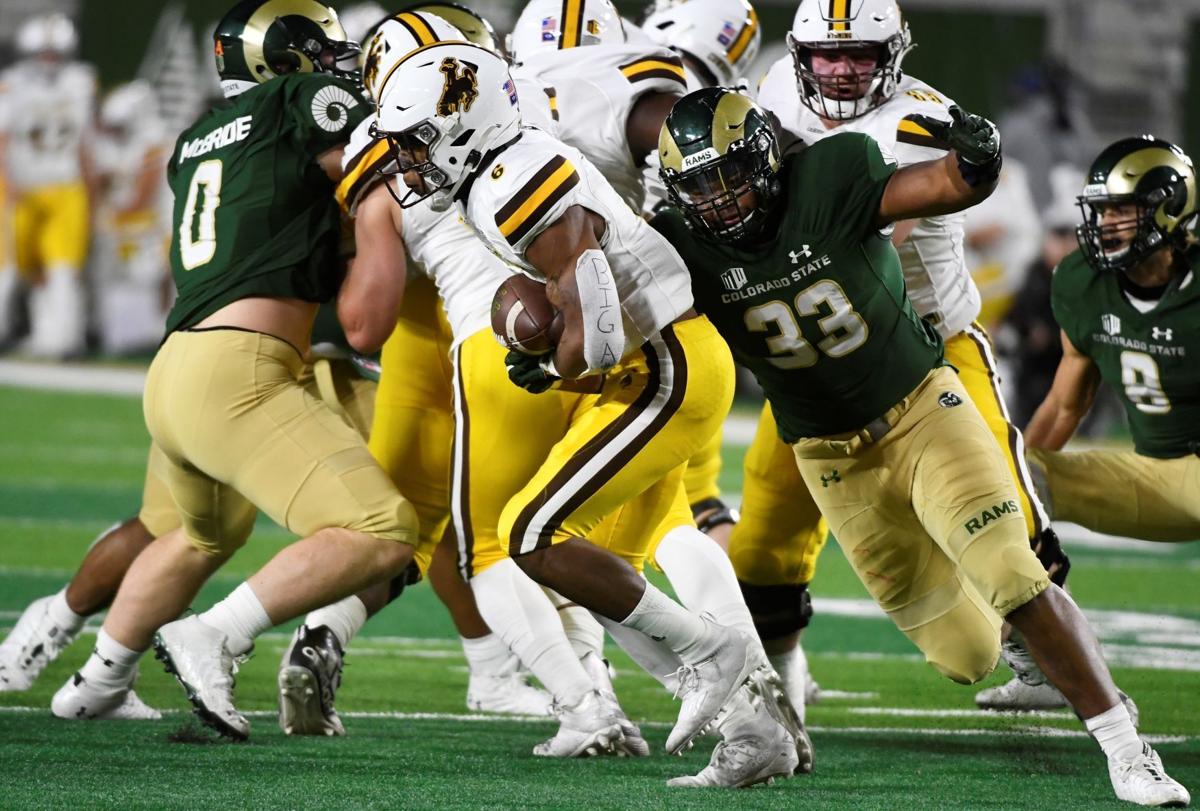 Wyoming's Xazavian Valladay is tackled by Colorado State's Manny Jones during their game on Nov. 5 at Canvas Stadium in Fort Collins, Colo. The Cowboys are looking to improve a third-down conversation rate that ranks 107th in the Football Bowl Subdivision entering Thursday's game against Utah State. 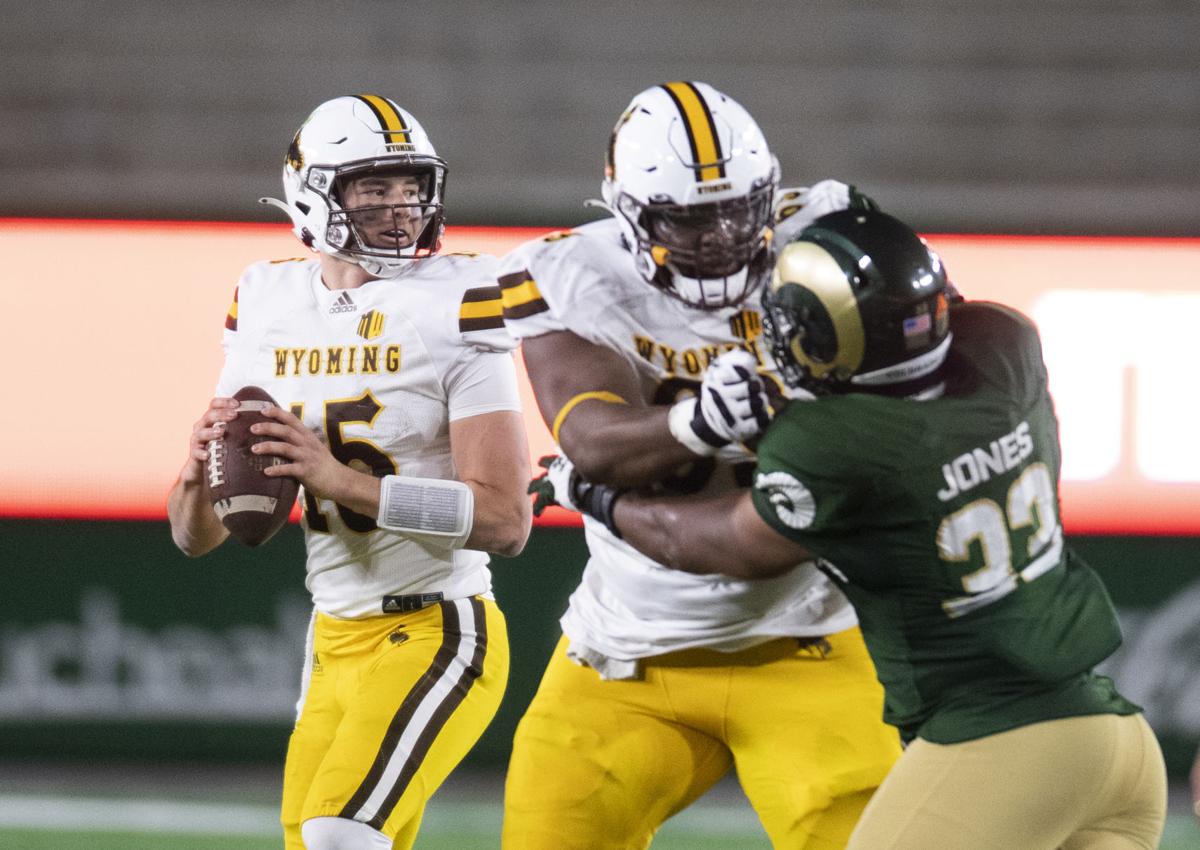 LARAMIE — Manny Jones broke through the line and dropped Xazavian Valladay for a 2-yard loss on Wyoming’s first offensive snap.

Two plays later, knowing the Cowboys had to go to the air facing third-and-12, Marshaun Cameron stepped in front of Levi Williams’ pass and returned the interception 30 yards for a touchdown to put Colorado State ahead early. It set the tone for a night in which UW’s offense routinely went backward in a 34-24 loss to the Rams its last time out.

UW (1-2, 1-2 Mountain West) finished just 3 of 16 on third down, which wasn’t all that surprising considering just how often the Cowboys found themselves behind the chains. Whether it was a lack of push from the offensive line or penalties, the average distance UW needed to convert on the money down was 10.5 yards. UW faced third-and-9 or longer nine times and only converted one of those.

Yet a closer look at the numbers shows it’s not just distance contributing to the third-down struggles, a trend UW will try to get going in the opposite direction Thursday when the Cowboys host Utah State (0-4, 0-4).

UW ranks 10th in the Mountain West and 107th in the Football Bowl Subdivision with a 32.6-percent conversion rate on third down, and third-and-long situations that favor the defense have certainly played their part in that. The Cowboys’ run-first offense is just 2 of 14 this season when facing third-and-9 or longer.

“We’re not made for that,” UW coach Craig Bohl said. “We’ve got to correct some of that and be more effective on first and second down. I don’t think that’s any secret to anybody out there.”

But even more manageable distances have been an issue. UW is converting just 40.6 percent of the time when needing 8 yards or fewer to keep drives alive (13 of 32). Even when the Cowboys need 3 yards or fewer to stay on the field — scenarios that would seem to be more advantageous for Valladay, Trey Smith and UW’s experienced offensive line — they’re barely converting half the time (7 of 13).

The Cowboys’ offensive line hasn’t been itself in more ways than one. Widely considered one of the top units in the Mountain West coming into the season, the group lost right tackle Alonzo Velazquez to a shoulder injury in the preseason. Redshirt freshman Latrell Bible then supplanted incumbent Rudy Stofer at left tackle after one game, and senior right guard Logan Harris has been out indefinitely with a medical issue that’s not coronavirus-related.

Center Keegan Cryder and left guard Eric Abojei are seasoned upperclassmen, and even the replacements, right tackle Frank Crum and right guard Zach Watts, each had multiple starts worth of experience heading into this season. But the line struggled to push back against CSU’s active defensive front, yielding six sacks and 14 tackles for loss in addition to a handful of penalties that kept UW’s offense going in reverse.

“They pretty much just had their guys in the right spots, and we weren’t really able to make the right corrections,” Abojei said. “We always look back to those type of things and figure out how to improve all that stuff. Making sure we have the right corrections when we do come off the field in a case like that and being able to adjust to something like that.”

Coaches and players said pass protection has been a focus for UW, which has already given up nine sacks this season. But the lack of execution isn’t exclusive to the guys up front.

Bohl said there have been times where Williams has held the ball too long while trying to find an open receiver, adding the Cowboys used their unexpected bye week to work on progressions in the passing game and Williams’ timing in the pocket. UW needs all of it working together to not only create more manageable third downs but also to convert them more regularly.

“Hopefully we aren’t going to have to access a lot of third-and-long calls, but we’ve worked hard in that area,” Bohl said.

When Williams has been able to get rid of the ball, the passing game has been explosive enough to help the Cowboys overcome their inconsistency in sustaining drives. The redshirt freshman is 12th nationally in yards per completion (15) in helping UW average 29.7 points per game, which ranks in the top half of the Mountain West.

Meanwhile, Utah State has been one of the worst defenses in the league through the first half of the season. The Aggies are yielding the fifth-most yards in the FBS (525.8 per game) and allowing the second-most points in the Mountain West (37.3 per game), so there figures to be more big-play opportunities for UW.

That is if the Cowboys’ offense can stay on the field.

“We’ve just got to be better on first and second down and mix it up a little bit,” Williams said. “We’re going to mix it up on them and we’re going to do some things that hopefully put us in second-and-mediums and third-and-shorts, which are going to help our offense a lot.

“I think we were almost 30 percent or something like that against CSU (on third-down conversions), which is unacceptable. A lot of them were third-and-long, but we’re still expected to make those and we have to.”

THREE AND (MOSTLY) OUT: Wyoming's offense is converting on third down at a 32.6-percent clip, third-worst in the Mountain West and 107th nationally.

HE SAID IT: "We’ve got to correct some of that and be more effective on first and second down. I don’t think that’s any secret to anybody out there." -- UW coach Craig Bohl.

Wyoming's Xazavian Valladay is tackled by Colorado State's Manny Jones during their game on Nov. 5 at Canvas Stadium in Fort Collins, Colo. The Cowboys are looking to improve a third-down conversation rate that ranks 107th in the Football Bowl Subdivision entering Thursday's game against Utah State.