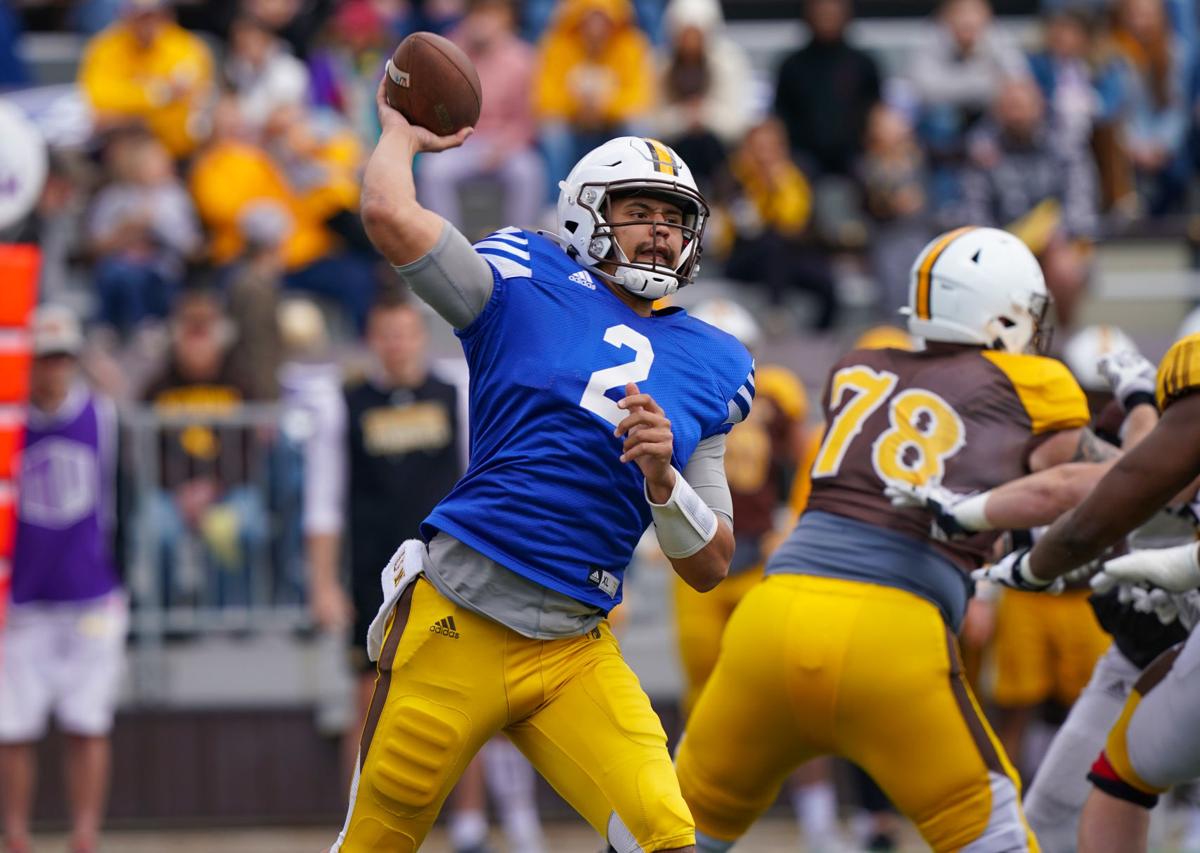 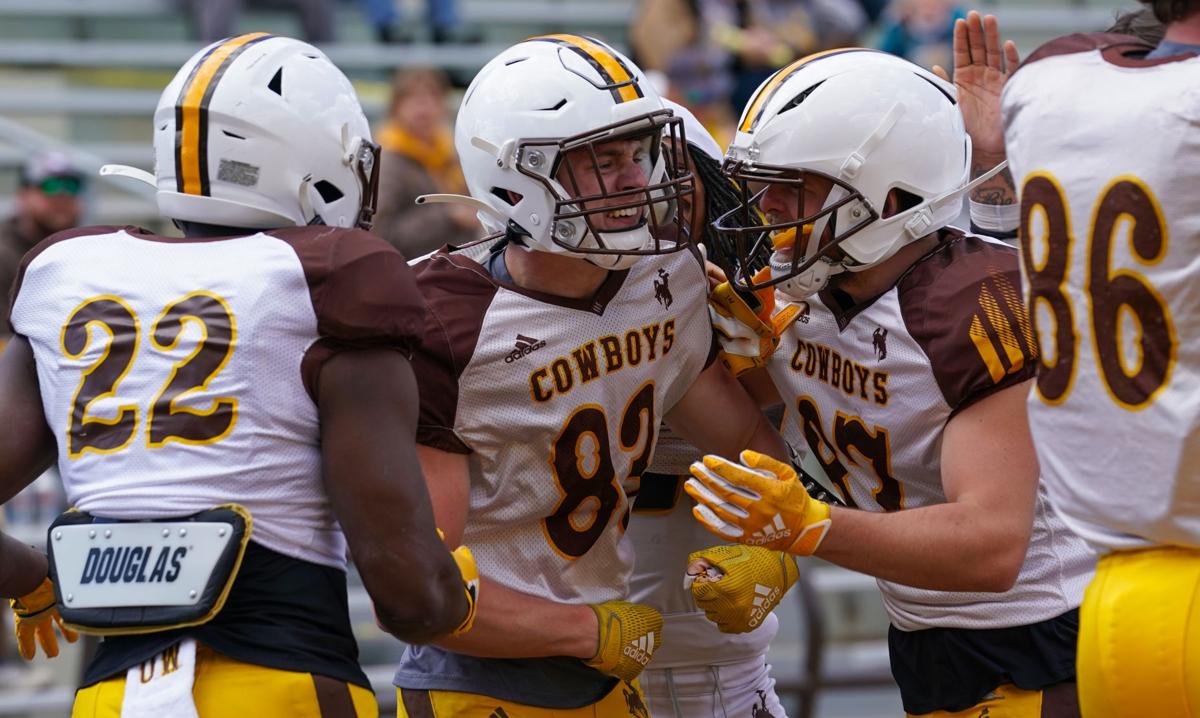 Wyoming wide receiver Will Pelissier (83) celebrates a touchdown for the Gold team during the Cowboys' spring game Saturday at War Memorial Stadium. 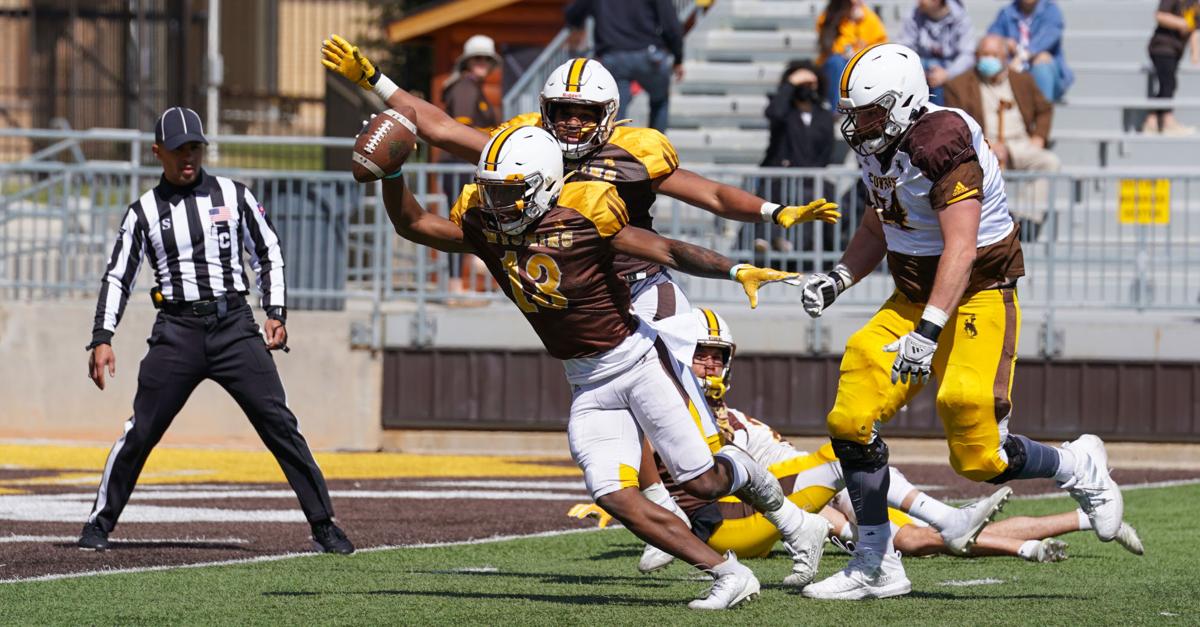 Wyoming cornerback Zaire Jackson (13) strips the ball and scores for the Brown team during the Cowboys' spring game Saturday at War Memorial Stadium.

LARAMIE — If Wyoming’s spring game was any indication, consider the Cowboys’ offense re-engineered.

Highlighted by the kind of efficiency and explosiveness rarely seen out of the passing game in recent years, the Brown team beat the Gold, 30-17, in Saturday’s scrimmage at War Memorial Stadium to cap the spring. It was the first public glimpse of what the Cowboys’ offense may look like under first-year coordinator Tim Polasek, who called his share of downhill and perimeter runs but also plenty of play-action passes and straight dropbacks out of a variety of formations, including empty sets (five receivers).

Polasek even dialed up some trickery with a throwback pass to offensive tackle Alonzo Velazquez, though the senior lineman was dropped for a loss at the end of a play called Midnight Rider.

“I’m going to fire (Polasek),” UW coach Craig Bohl said jokingly. “What the hell is Midnight Rider, throwing it to a tackle and losing 15 yards? But outside of that, there were some good things. We certainly tried to throw the ball better.”

The Cowboys did more than that.

The passing game continues to be a point of emphasis after UW turned in a completion percentage in the 40s for the third straight season last fall. The last time UW played a game in its own stadium, the Cowboys didn’t find the end zone and mustered just 146 yards in a 17-9 loss to Boise State to close out the abbreviated 2020 season. Bohl had seemingly seen enough, leading to talk from UW’s eighth-year coach this offseason about “re-engineering” how the Cowboys would operate their offense under Polasek.

UW’s top two quarterbacks, Sean Chambers (leg) and Levi Williams (shoulder), both dealt with injuries last season, but both returned with a clean bill of health this spring and turned in solid performances Saturday. Chambers, who quarterbacked the Gold team, finished 8 of 13 passing for 172 yards and a pair of touchdowns while Williams led the Brown’s offense by going 10 of 17 for 132 yards and a score.

It made for a combined 60% completion rate between the two, who have been competing throughout the spring for the starting job. Bohl said a post-spring depth chart will likely be released sometime in the coming week but that it won’t be “etched in stone,” meaning the battle between Chambers and Williams could continue into the fall regardless of that pecking order.

“You want the best for (Chambers), but at the end of the day, I’m a competitor and I want to play,” Williams said. “I know Coach (Polasek) is going to put in the best guy, and tht’s all that matters. He’s going to play the hot. If that’s me or that’s him, it doesn’t really matter.”

It wasn’t like the Cowboys spent all afternoon dinking and dunking either. Add Jayden Clemons’ scoring toss to Wyatt Wieland for the Gold team in the second half, and all but one of UW’s four touchdown passes covered at least 19 yards (UW had just one passing touchdown all of last season). The longest play from scrimmage came on a 71-yard screen pass from Chambers to sophomore running back Titus Swen, who helped his quarterback out by breaking a tackle near the line of scrimmage before busting loose down the sideline.

“We were dedicated and committed to changing this narrative about us, and I think that was on display today,” Chambers said of the passing game. “But I know we can’t stop here. This is against our team. We’ve got to implement this in the fall against other teams.”

Yet Chambers nor Williams were perfect. Getting his first game-like reps since last season’s opener at Nevada on Oct. 24, Chambers tried to force a ball into traffic in the second half and was intercepted by freshman Cameron Stone. Williams suffered the same fate when he underthrew a pass on the Gold team’s ensuing possession.

“A little bit of a mixed bag,” Bohl said of the quarterbacks. “I thought some of the throws that I thought should’ve been fairly easy completed balls were not, and then there were some challenging throws either the receiver made a play or (the quarterbacks) made a couple of nice throws as well.

“We’re improving. We’ve talked about improving our passing game. The efficiency on some of the shorter stuff needs to improve, but I certainly saw some explosive plays in the passing game.”

The lone touchdown on the ground came from Swen, who again broke several tackles late in the fourth quarter en route to a 55-yard scoring run. Freshman defensive back Zaire Jackson also got in on the scoring for the Brown team with a strip after a muffed punt into the end zone late in the third quarter.

John Hoyland and Luke Glassock each connected on their lone field-goal attempts. Bohl said there was the occasional clock-management issue that will have to get cleaned up, but there wasn’t much for UW’s coach to complain about Saturday, particularly on the offensive side of the ball.

“Our guys have been competitive and disciplined. Now it’s time to take the next step forward,” Bohl said. "But overall I would give this a pretty doggone good grade compared to my 18 years as a head coach.”

DIFFERENT AIR: QBs Sean Chambers and Levi Williams combined to complete 60% of their passes (18 of 30) for 304 yards and three touchdowns in Wyoming's spring game.

EXPLOSIVE PLAYS: Four of the game's six touchdowns covered at least 19 yards, including a 55-yard run by Titus Swen.

HE SAID IT: "We were dedicated and committed to changing this narrative about (our passing game), and I think that was on display today." -- Chambers.

Wyoming wide receiver Will Pelissier (83) celebrates a touchdown for the Gold team during the Cowboys' spring game Saturday at War Memorial Stadium.

Wyoming cornerback Zaire Jackson (13) strips the ball and scores for the Brown team during the Cowboys' spring game Saturday at War Memorial Stadium.