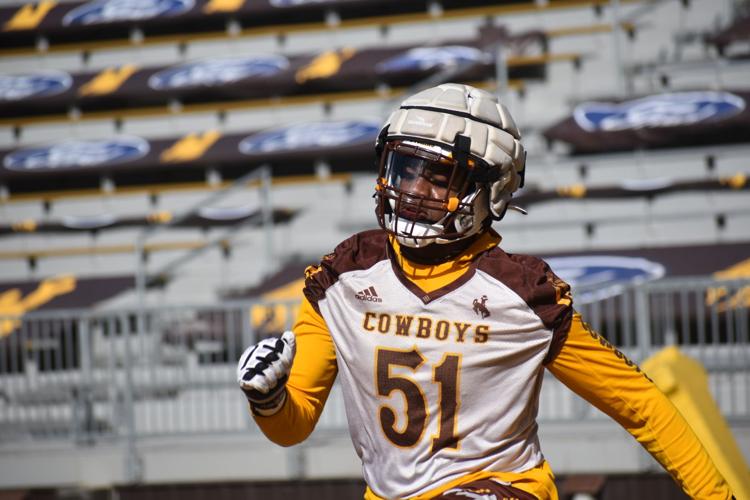 Wyoming defensive end Solomon Byrd runs through a drill during spring practice April 8 at War Memorial Stadium in Laramie. Byrd is one of a handful of players back with the team this spring after opting out of the 2020 season amid the coronavirus pandemic. 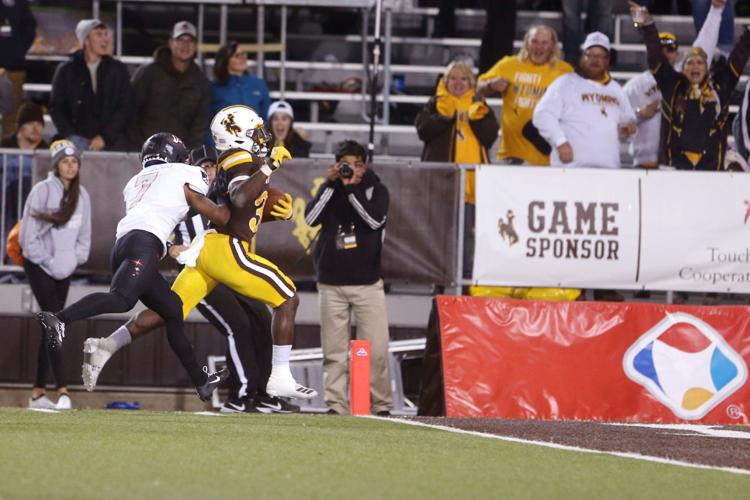 Wyoming running back Titus Swen carries the ball into the end zone for a 44-yard touchdown against UNLV on Sept. 28, 2019, at War Memorial Stadium in Laramie.

LARAMIE -- Wyoming has gotten a boost in talent and depth this spring with the return of many of the players it didn’t have at its disposal last fall, including those who chose to opt out.

But given those six players hadn’t played football in six months, the Cowboys are tempering expectations for them. At least for now.

Solomon Byrd, Rome Weber, Mario Mora, Titus Swen, Davon Wells-Ross and Claude Cole are back taking part in spring practices after opting out of last season because of health concerns related to the coronavirus pandemic. It’s their first time back on the practice field since their opt-outs became official in September.

Practices and games weren’t the only activities the opt-outs missed out on while they weren’t with the team. The decision to not participate also required those players to stay away from all team facilities, so they couldn’t even get in workouts or film sessions on campus. Any of that had to be done on their own.

It wasn’t until the team’s winter conditioning program started in January that they officially rejoined the team, a welcomed lift for the defense in particular. Swen, a sophomore running back, was the only opt-out on the offensive side of the ball.

For most of them, UW’s first spring practice on April 6 marked their first on-field workout since the 2019 season. Now eight practices in, defensive coordinator Jay Sawvel said, all things considered, he’s been pleased with what he’s seen from Weber, Byrd, Mora and the other defensive players who’ve returned from their opt-outs.

But Sawvel added those players returning to their form from two years ago isn’t going to happen overnight.

“That’s a day-to-day thing,” Sawvel said. “You’ve got to have a realistic expectation. Now there’s good things that they do, and you see that. But football is not a lifetime sport. You don’t go out in your driveway and pass-rush people or cover people. It takes a little time to get back in the full flow of things.”

Although the Star-Tribune has requested interviews with each player who opted out last season, UW has yet to make them available to the media this spring. But Weber, who started all but one of the Cowboys’ 13 games at free safety in 2019, took to Twitter earlier this month to express his emotions on his return.

“Feels good to be back on that field,” Weber tweeted on April 8.

As for how their teammates felt about them rejoining the team after sitting out of UW’s 2-4 abbreviated season last fall, they’ve been unanimous in echoing Muma’s sentiment. Every player asked about the situation this spring has been adamant that there were no hard feelings toward those who felt like opting out was best for their situation.

Feels good to be back on that field 🏈#8Ball 🎱 pic.twitter.com/TKv5gy3Qcc

“It’s everybody’s decision, and it’s out of all respect,” senior offensive lineman Logan Harris said. “I know a lot of guys, they had family members that they were living with at the time that were dealing with underlying conditions and couldn’t get (COVID-19). There’s nothing against those guys at all.”

And given the roles they played and the production they had pre-COVID, why wouldn’t their coaches and teammates be giddy about having them back in the fold?

Mora, a sophomore nose tackle, joined Weber as a starter on that 2019 defense that finished in the top 11 in the Football Bowl Subdivision in points and rushing yards allowed. Byrd was in line to take over as a starting defensive end opposite Garrett Crall last fall after leading the Cowboys in sacks in 2019 en route to freshman All-America honors. The three of them accounted for 105 tackles, 15 tackles for loss, 9.5 sacks, four forced fumbles and an interception that season.

Wells-Ross, a junior end, and Cole, a sophomore tackle, provide even more experienced bodies along a defensive line that was stretched thin last season because of all the attrition. Both were a part of the rotation two seasons ago as key backups up front.

“It’s pretty exciting to see all the depth we have,” Crall said. “Every day is a competition now.”

Meanwhile, Swen finished as UW’s third-leading rusher (337 yards) in his only collegiate season so far. He also averaged 5 yards per carry as a true freshman.

“We’re all a team at the end of the day,” senior safety Esaias Gandy said. “Everybody had personal reasons (to opt out). That’s fine. As long as you’re willing to come back, work and win a Mountain West championship, that’s all we could ask for.”

With competition in abundance this spring, UW coach Craig Bohl made it clear the opt-outs will have to earn their spots on the depth chart just like everybody else.

Weber, whom Sawvel said is working at strong safety this spring, is competing with last season’s starters on the back end of the defense, Gandy and fellow senior Braden Smith. Byrd is back with a group of defensive ends that’s got more seasoning with freshmen Jaylen Pate and DeVonne Harris getting plenty of game reps in his absence. Sophomore Cole Godbout and freshman Gavin Meyer are the primary competition for Mora at nose tackle after rotating at that spot last fall, and Swen is likely competing to be the No. 3 back again with veterans Trey Smith and Xazavian Valladay once again at the top of the backfield depth chart.

Sawvel said it may take some of the opt-outs longer than others to shake off all of the rust depending on their position, but he’s confident it will happen eventually. It will just require some patience.

Unit still finished last season in the top 45 nationally in points and yards allowed despite mass attrition, but the Cowboys want more in Year 2 under coordinator Jay Sawvel.

Five players won't play for the Cowboys this fall because of health concerns amid the coronavirus pandemic.

Senior's strong spring has him ahead of Rome Weber after losing out on starting job in 2019.

After opting out last season, the Cowboys' sophomore safety is back with added responsibility and more motivation following the recent birth of his first child.

Wyoming defensive end Solomon Byrd runs through a drill during spring practice April 8 at War Memorial Stadium in Laramie. Byrd is one of a handful of players back with the team this spring after opting out of the 2020 season amid the coronavirus pandemic.

Wyoming running back Titus Swen carries the ball into the end zone for a 44-yard touchdown against UNLV on Sept. 28, 2019, at War Memorial Stadium in Laramie.