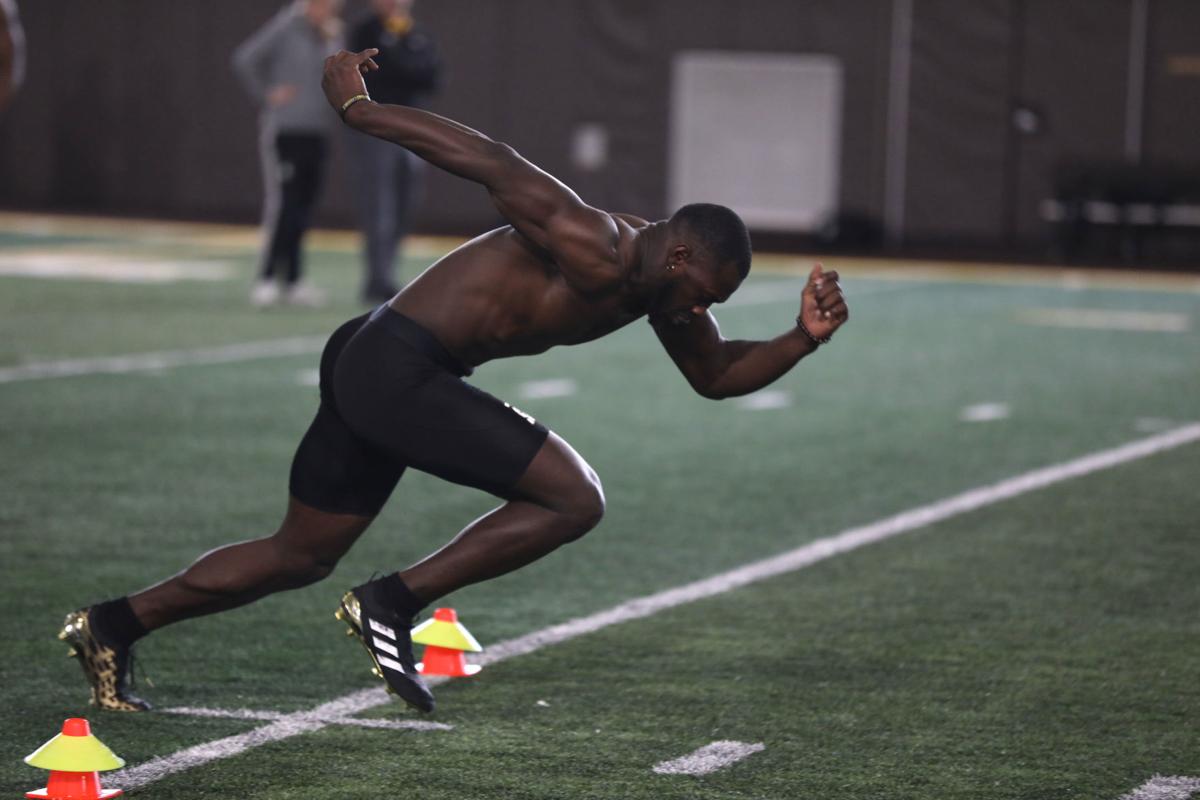 Former Wyoming safety Alijah Halliburton pushes off his starting position to propel himself into the 40-yard dash at UW's Pro Day on Tuesday at the Indoor Practice Facility in Laramie. 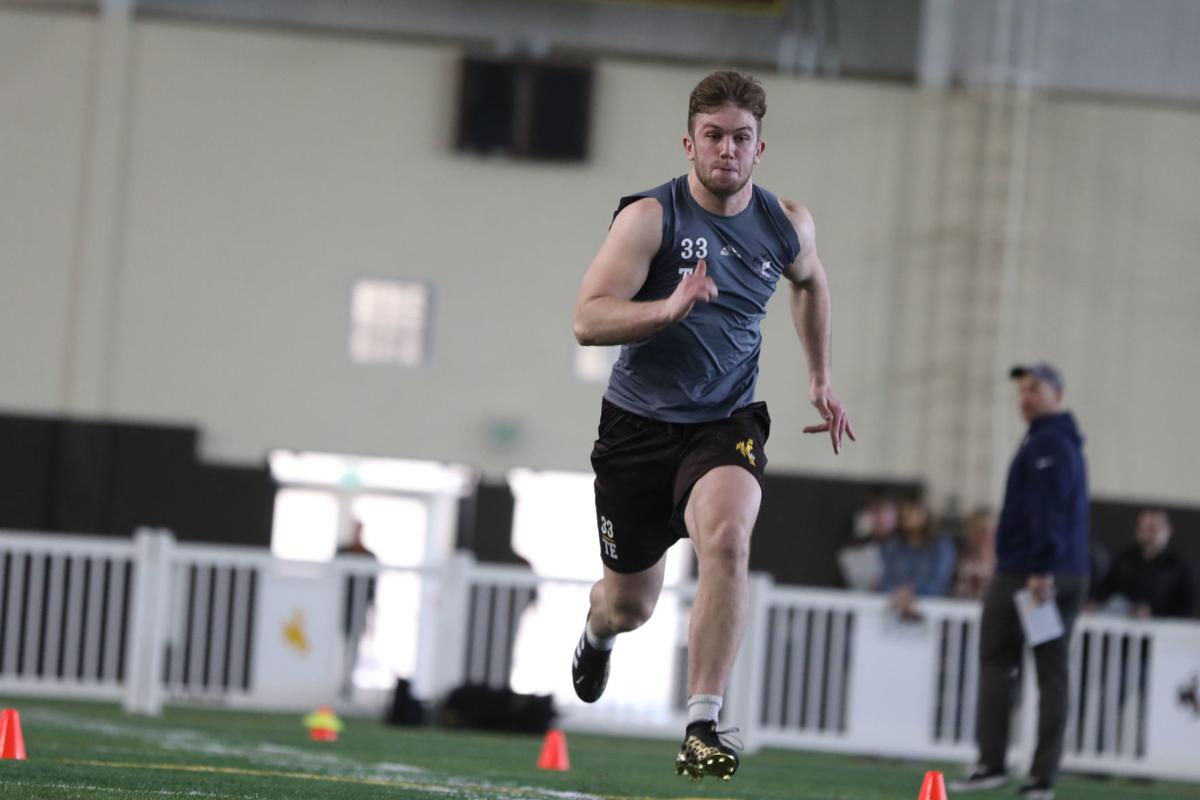 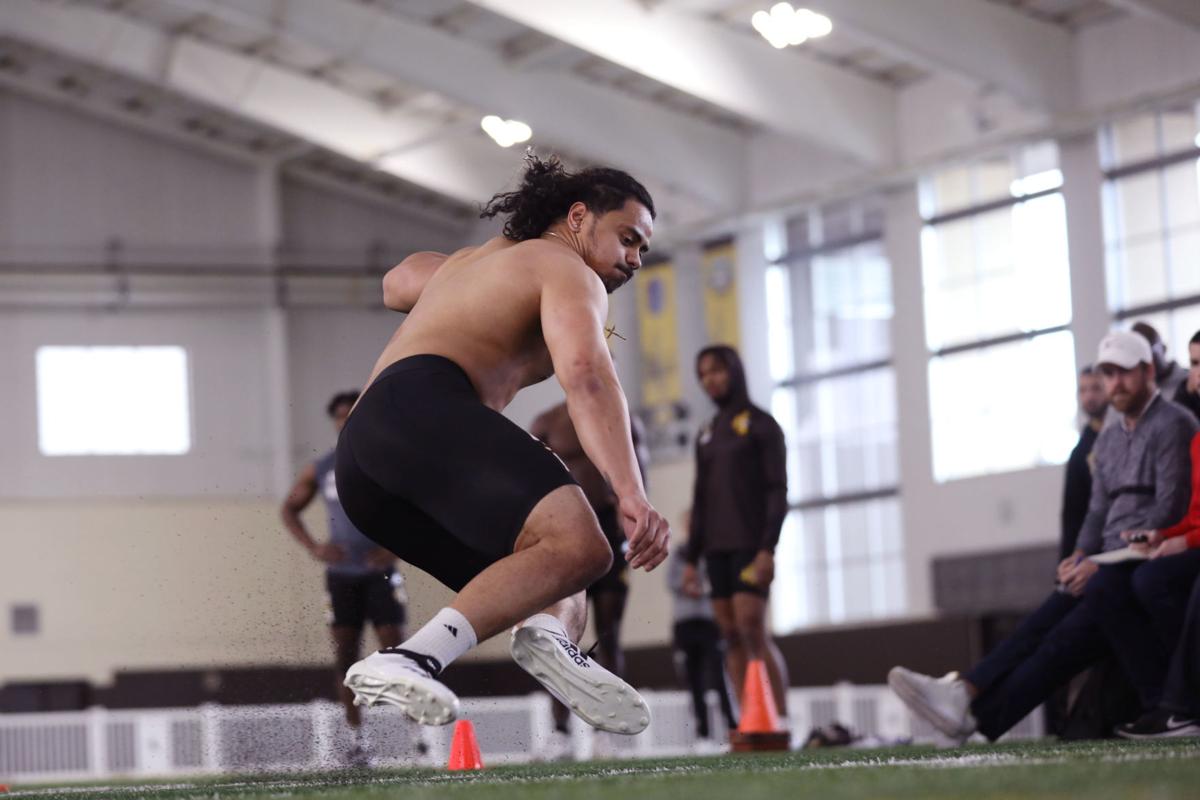 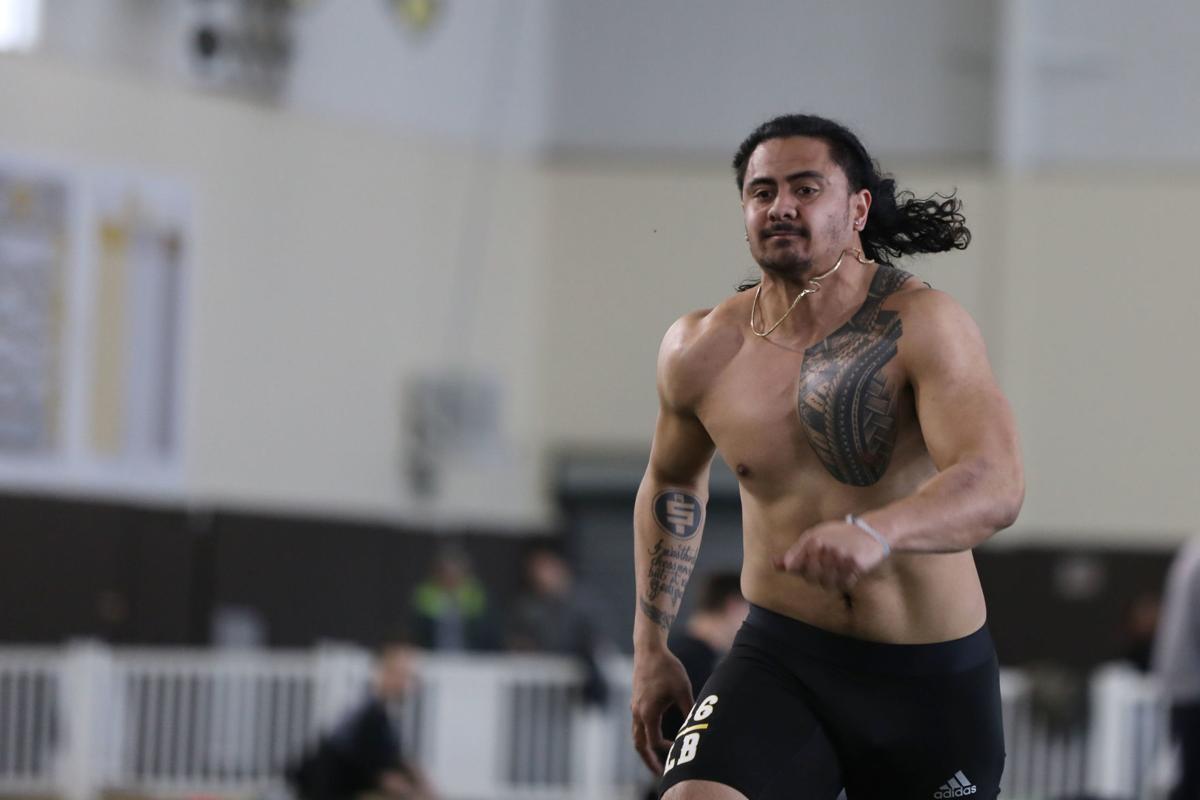 Former Wyoming linebacker Cassh Maluia runs through a drill at UW's Pro Day on Tuesday at the Indoor Practice Facility in Laramie. 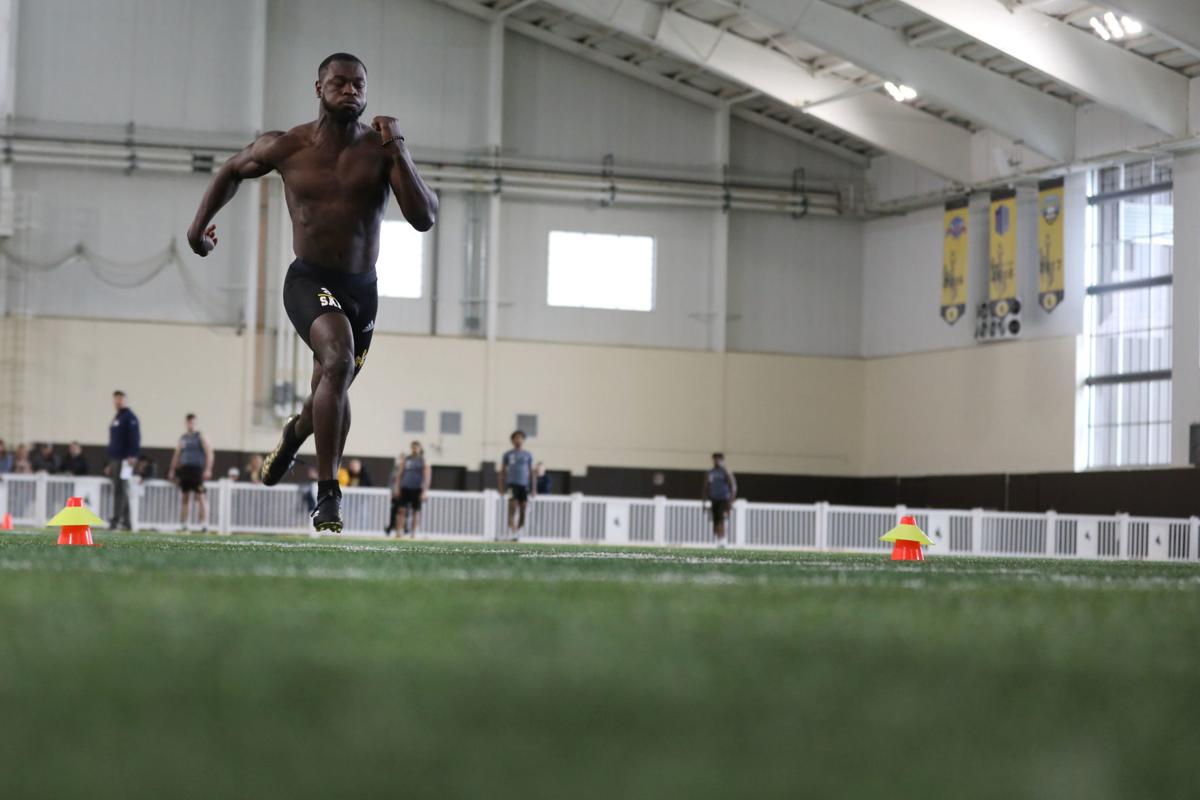 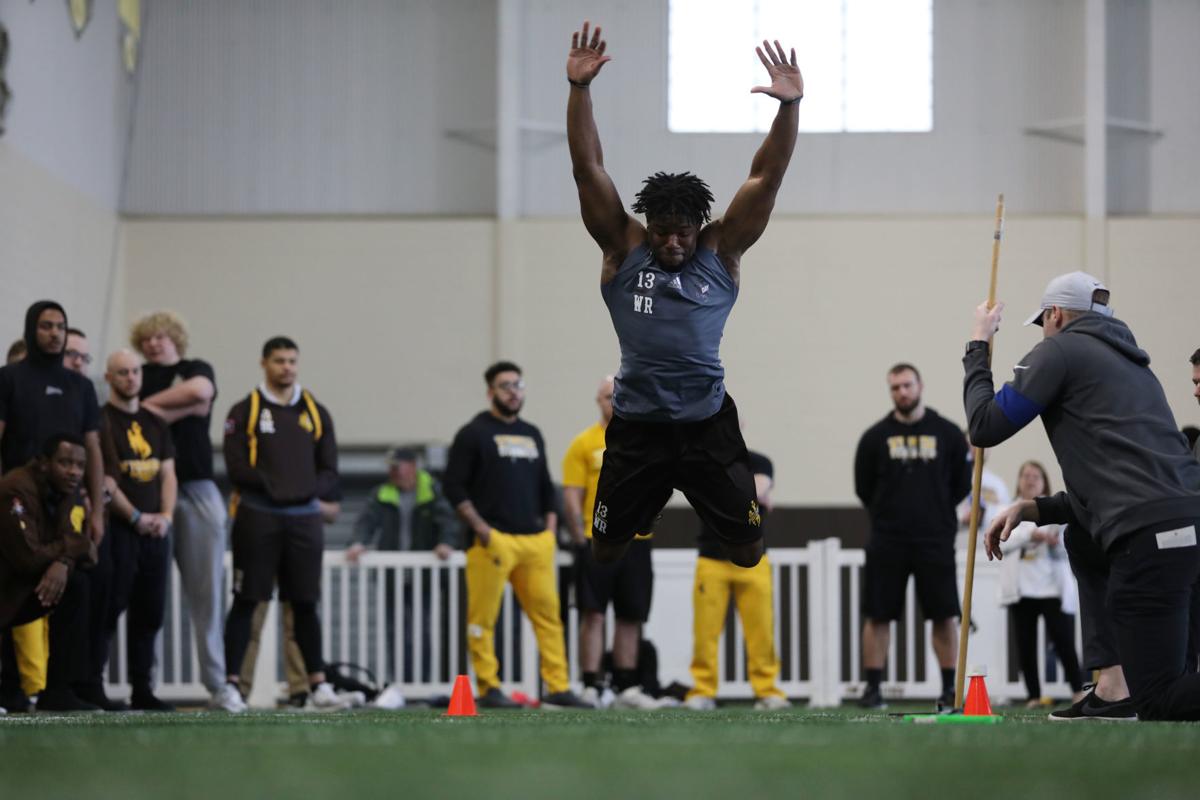 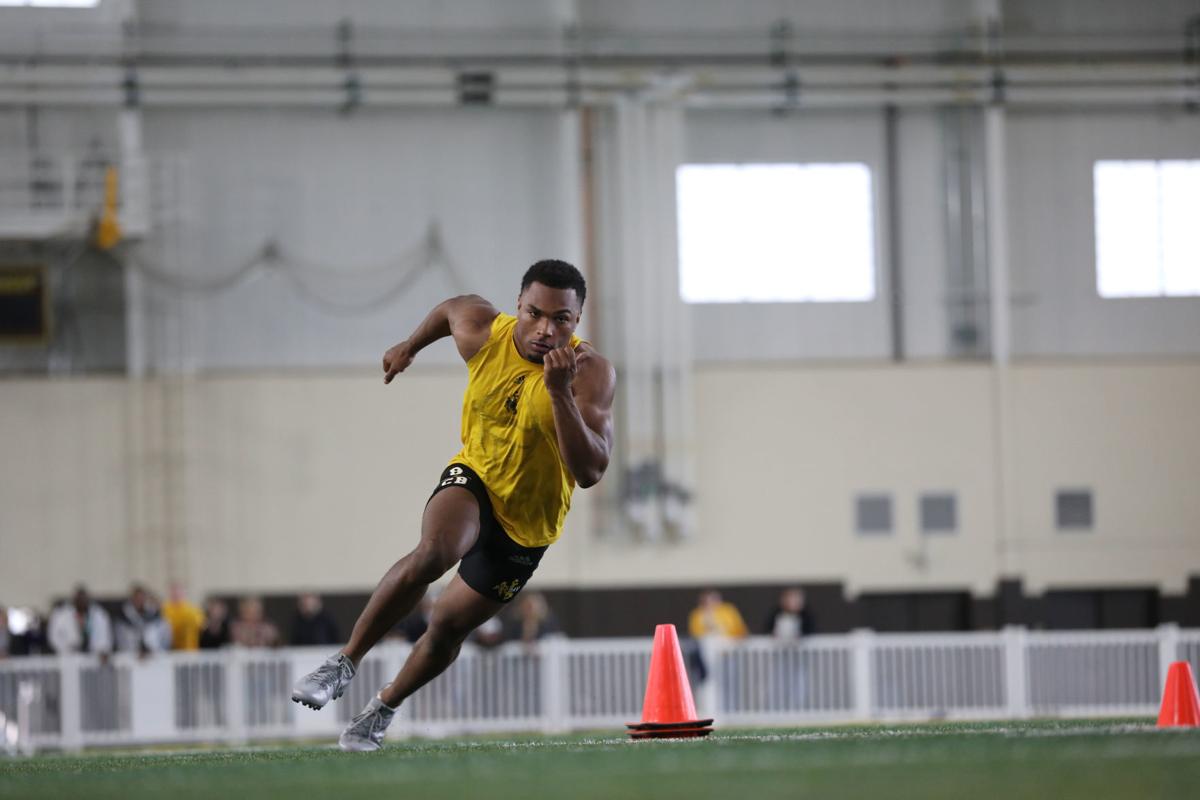 Former Wyoming cornerback Tyler Hall sprints around a cone set up for UW's Pro Day on Tuesday at the Indoor Practice Facility in Laramie.

LARAMIE — For some NFL draft hopefuls, working out at their school’s annual Pro Day is just the latest chance to impress league scouts during the pre-draft process.

For others, it’s the only one.

Wyoming had plenty of draft-eligible players looking to take advantage of their lone opportunity Tuesday. With 23 NFL teams in attendance, 10 former Cowboys worked out at UW’s indoor practice facility. For seven that were not invited to a postseason all-star game or the NFL Scouting Combine, it was their chance to showcase their talent for the next level.

“It is nerve-wracking, but at the same time, I feel like I can’t let that moment get too big because when you let the moment get too big, that’s when you try to compromise and do stuff that you don’t usually do,” said receiver Rocket Ismail Jr., who led the Cowboys in receptions (23) and receiving yards (355) last season. “I just treated it like I was getting ready for a game. Like we were fixing to play Colorado State.”

Ismail, a junior college transfer who played just two seasons at UW, said he was primarily focused on displaying his speed for the teams in attendance and added he was pleased with the times he posted in the 40-yard dash and agility drills, none of which are released publicly. So was linebacker Cassh Maluia, who said he even surprised himself with how well he ran. Maluia said he heard from multiple scouts that he ran anywhere from the low 4.5s to the high 4.4s in the 40.

“My goal was the 4.5 area, but I didn’t realize it was going to be that fast,” said Maluia, a three-year starter who earned all-Mountain West honorable mention honors this past season.

Having not gone through any sort of showcase event before Tuesday, Maluia said he sought advice from fellow linebacker Logan Wilson, who returned to campus for Pro Day after playing in the Senior Bowl and, most recently, participating in the NFL Scouting Combine. Maluia’s Pro Day performance, which included position drills, earned him meetings with the Los Angeles Rams and New England Patriots afterward.

“(Wilson) said it’s just like a regular workout,” Maluia said. “Just playing football and doing you. And I tried to go out there and do that.

“I’ve listened to some Samoan music from back home to just clear my mind and ease my body. And then just amp it up this morning.”

Perhaps UW’s most surprising omission from any sort of postseason showcase was safety Alijah Halliburton, a first-team all-MW selection who led the league with 130 tackles last season.

“That gave me a big chip on my shoulder just to be overlooked,” Halliburton said. “After everything that I’ve done, I just expected a little bit more.”

At 6-2, Halliburton is rangy for the position, but he said he figured some NFL teams wrote him off for his wiry frame after watching him playing last season right at 180 pounds. Halliburton weighed in Tuesday at 198 pounds and said his primary objective was to show teams he can still be an explosive athlete with the extra weight.

Halliburton locked out just 10 repetitions of 225 pounds on the bench press but had the highest vertical jump of the day at 38.5 inches. He said he ran the 40 in the 4.5 range, which he added was his goal. Halliburton said he’s hoping to receive an invite from the Denver Broncos to participate in their local pro day before the NFL Draft in late April. But whether it’s through the draft or free agency, Halliburton believes his pro-day performance helped him in his efforts to be picked up by a team.

“When it comes to me, I always hope for the best,” Halliburton said. “I always think that I am going to make a team, get on a team and get on a roster. I just wanted the opportunity, that shot. That was today. We’ll see what happens.”

Tight end and Casper native Josh Harshman, defensive end Josiah Hall, receiver John Okwoli and punter Ryan Galovich joined Halliburton, Maluia and Ismail as the players who were working out in front of NFL personnel for the first time. They all share the hope that they took advantage of it enough to catch at least one team’s eye.

“That’s all I’m looking for is just one opportunity,” Ismail said. “Regardless if I got to go to the combine or the (East-West) Shrine (Game), I’m grateful to even be able to have a pro day. I remember at one point in my career I didn’t have it in me anymore and I just didn’t want to keep going. To make it this far is a blessing.”

GETTING THEIR SHOT: Of Wyoming's 10 participants at the school's annual Pro Day on Tuesday, seven went through workouts in front of NFL personnel for the first time.

HE SAID IT: "I just wanted the opportunity, that shot. That was today. We’ll see what happens." -- Halliburton

Former Wyoming safety Alijah Halliburton pushes off his starting position to propel himself into the 40-yard dash at UW's Pro Day on Tuesday at the Indoor Practice Facility in Laramie.

Former Wyoming linebacker Cassh Maluia runs through a drill at UW's Pro Day on Tuesday at the Indoor Practice Facility in Laramie.

Former Wyoming cornerback Tyler Hall sprints around a cone set up for UW's Pro Day on Tuesday at the Indoor Practice Facility in Laramie.