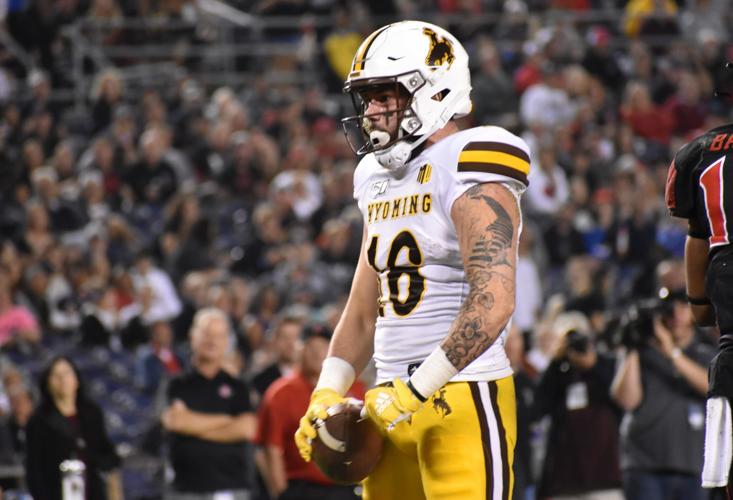 Wyoming wide receiver Gunner Gentry reacts after catching a pass against San Diego State during their game on Oct. 12, 2019 at SDCCU Stadium in San Diego, Calif. 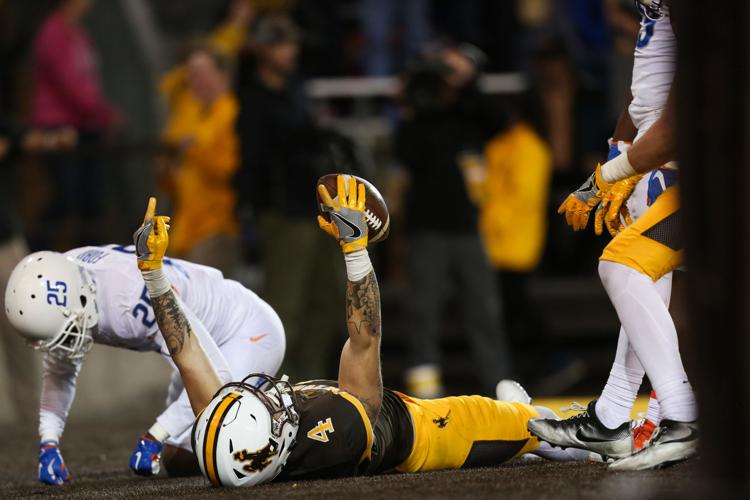 Wyoming's Tanner Gentry celebrates in the end zone after a touchdown in the fourth quarter against Boise State on Oct. 29, 2016, at War Memorial Stadium.

LARAMIE – There was a 2016 flashback during Wyoming’s practice on Friday inside War Memorial Stadium.

Gunner Gentry reminded witnesses of what the Pokes’ offense, which has struggled with the forward pass in recent seasons, looked like six years ago when Josh Allen was creating a surreal highlight reel with Gunner’s older brother, Tanner Gentry.

“He made a big-time catch today, which was great,” UW head coach Craig Bohl said of Gunner Gentry. “It was a fade, and he made a great contested play, and that’s what we’re looking for.”

Gunner sat in the stands for every game in 2016 as Tanner finished his senior season with 72 receptions for 1,326 yards and 14 touchdowns before starting his NFL career with the Chicago Bears.

Sean Chambers and Levi Williams threw a total of 15 touchdowns last season with Isaiah Neyor catching 12 of them before taking his talents to Texas.

After the spring game, Bohl said Gentry would be an “X factor” for the Cowboys in 2022, if the 6-foot-3, 202-pound redshirt junior was able to recover from two surgeries.

Gentry tore the patellar tendon in his left knee during spring practice in 2021 and again last September. He hasn’t appeared in a game for the Pokes since the 2020 season when he caught the only touchdown pass thrown by UW during the bizarre pandemic-shortened campaign.

“It was a long process, but I’m glad to finally be over the hump and playing again,” Gentry said. “The (second injury) was an unfortunate event. We were just trying to see what the leg could hold and it wasn’t really ready for the kind of strain we put it through. It just kind of snapped.

“We definitely took a smart approach to the second rehab and made sure we took our time with things. I wasn’t trying to rush it.”

Gentry was cleared to practice in the spring, but was held out as a precaution. He was also taken out of a practice early this fall early due to soreness.

Everyone in the receiver room was excited to see Gentry make his presence felt in the competition.

“Gunner had a really good catch on the left sideline,” Merritt said. “My favorite part about that is everybody celebrates when somebody makes a play like that. It’s a great culture here.”

Gentry witnessed the chemistry on the 2016 team, which beat rivals Air Force and Colorado State and knocked off then-No. 13 Boise State and then-No. 24 San Diego State during the regular season.

Last fall Gentry watched the home games from a window in the High Altitude Performance Center as the Pokes suffered exasperating losses to Fresno State, New Mexico and Hawaii during a 2-6 MW finish.

“One thing is just staying perseverant,” Gentry said of the perspective gained from his bird’s eye view. “I definitely saw that we could get down on ourselves kind of easy. So just being able to be gritty and keep pushing through and fighting through hard stuff is kind of a big takeaway.”

Neyor was one of 15 players to transfer out of the program from the time the regular season ended until the players began summer workouts with a lot of new faces.

“I’ve been sitting out so long that when I get back I’m not looking for personal accolades,” Gentry said of his role. “I just want to make sure that we’re out there trying to win football games. Whatever I have to do out there to help our team get to that point, whether that’s me catching 10 balls a game or going out there and blocking all game, whatever it takes.

“At this point. I’m just really happy to be back and leading the young guys and playing my role.”

Gentry has spent time learning the nuances of the position while training with Tanner, who is currently trying to make the Buffalo Bills’ roster for the third consecutive season.

Little brother has also had opportunities to catch passes from Allen, the Bills’ superstar, during the offseason.

“I’m kind of an honorary member at this point,” Gentry said of Bills Mafia. “It’s cool to see what they’ve done with their careers and the point that they’re at. It helps me to see it’s possible and something I can look at and say I’ve seen the blueprint and know exactly what they did.

“If I can follow it and make sure I do all the right things, I have a shot.”

UW will be a run-first offense as long as Bohl is the head coach, but there is also an emphasis in camp on identifying receivers who can make splash plays in the vertical passing games when the defense loads the box to stop Titus Swen.

Perhaps the offense can strike a balance that will lead to a 2016 throwback season. The Pokes were picked to finish last in the Mountain Division that year and ended up hosting the MW championship game.

BACK IN THE MIX: After missing all of last season with a torn patellar tendon, wide receiver Gunner Gentry has returned to the Cowboys' rotation in fall camp.

HE SAID IT: “It was a long process, but I’m glad to finally be over the hump and playing again.” -- Gentry.

The Pokes were their own worst enemy in key moments last season, but OC Tim Polasek believes fewer mistakes and a more efficient passing game can turn the offense around.

Oluwaseyi Omotosho didn't play high school football until his junior year, but the redshirt freshman is developing into an impactful defensive end for the Pokes.

During Wyoming's football media day Wednesday, head coach Craig Bohl challenged his players to work together to hang a Mountain West championship banner before next year's event in the Indoor Practice Facility.

Wyoming assistant Gordie Haug, who was recently promoted to "Executive Director of Recruiting for Cowboys Football," says the program will continue to use transfer portal but will still focus on developing players from high school ranks.

Andrew Peasley is the favorite to be Wyoming's starting quarterback this season, but Evan Svoboda is doing his best to make it a difficult decision for the staff.

Keonte Glinton is the favorite to be UW’s starting nickelback, but true freshman Malique Singleton and redshirt freshman Buck Coors are pushing for playing time.

This Pokescast looks ahead to Wyoming's Week 0 opener at Illinois

Alabama transfer Keelan Cox's first season at Wyoming is likely over after the defensive end suffered a fractured hip.

Wyoming running back D.Q. James is driven by the memories of his brother Savon Bell and former recruiting classmate Tony Evans Jr., both of whom died of gun violence.

Wyoming receiver Gunner Gentry will miss his second consecutive season due to knee injuries after getting injured on a non-contact play in practice.

Wyoming wide receiver Gunner Gentry reacts after catching a pass against San Diego State during their game on Oct. 12, 2019 at SDCCU Stadium in San Diego, Calif.

Wyoming's Tanner Gentry celebrates in the end zone after a touchdown in the fourth quarter against Boise State on Oct. 29, 2016, at War Memorial Stadium. 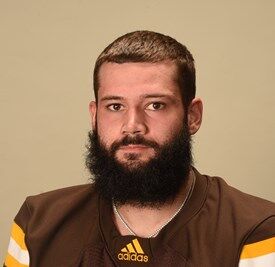