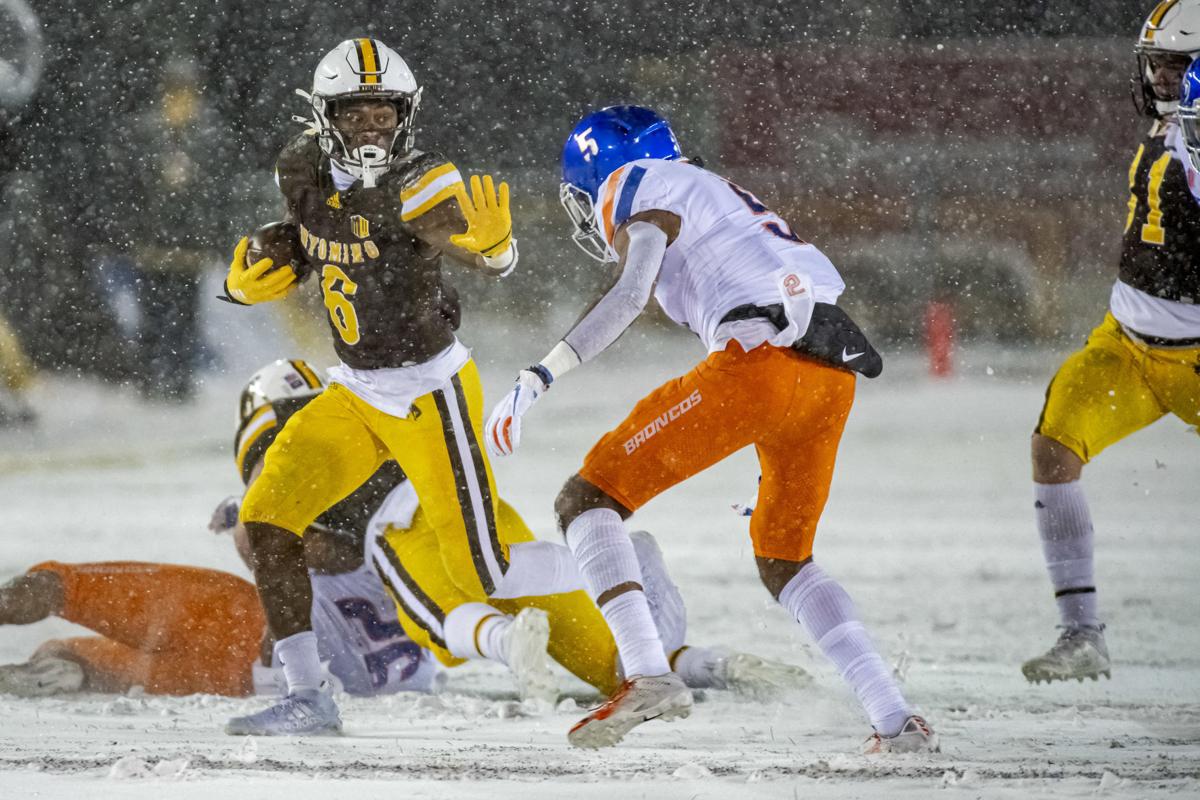 Wyoming running back Xazavian Valladay looks to escape Boise State's Evan Tyler during their game Dec. 12 at War Memorial Stadium in Laramie. Valladay is back as the headliner of a deep Cowboys backfield. 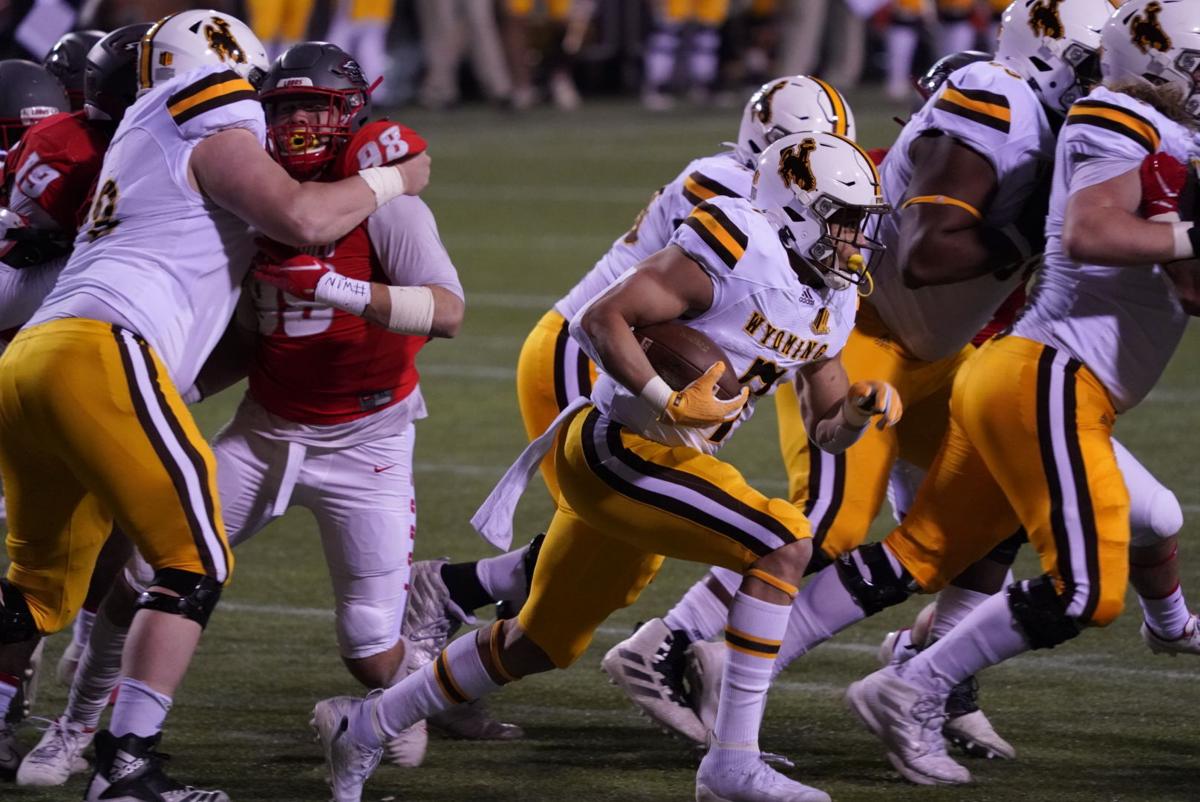 Wyoming running back Trey Smith looks for an opening against New Mexico during their game Dec. 5 at Sam Boyd Stadium in Las Vegas.

LARAMIE — At the beginning of last season, Xazavian Valladay was Wyoming’s unquestioned RB1. By the end of it, Trey Smith held that distinction.

The Cowboys once again have a backfield duo that’s virtually interchangeable in that role.

At first, there was a chance Valladay would be the only half of that pairing to return to UW for another season. But Smith, who had already been in the program for two years after transferring from Louisville, decided to use the free year of eligibility granted to seniors by the NCAA and run it back at UW.

It gives the Cowboys’ running game one of the Mountain West’s top 1-2 punches heading into the spring.

Valladay, a redshirt junior last season, led the league in rushing on a per-game basis in 2019 before finishing third in the conference in rushing yards (550) during the Cowboys’ pandemic-shortened season last fall. A late-season injury forced him to miss a game and limited him to just 17 carries in the final two games he played, but UW’s production on the ground didn’t drop off much thanks to Smith.

More of a bruiser than Valladay, Smith stepped in to rush for 164 yards in a blowout win over UNLV and 154 in a loss to New Mexico. He racked up nearly 500 yards on 88 carries for the season, averaging 5.5 yards a tote.

With Smith’s six years of college experience and Valladay’s 2,575 career all-purpose yards, the Cowboys know exactly what they have in those two. The biggest task this spring for running backs coach Gordie Haug and the rest of the offensive staff may be figuring out the depth chart behind them in a backfield that has no shortage of options.

Redshirt freshman Dawaiian McNeely emerged as the Cowboys’ No. 3 back last season, but that was without Titus Swen in the fold. Swen, UW’s third-leading rusher as a true freshman in 2019, opted out of last season because of health concerns related to the coronavirus pandemic, but UW coach Craig Bohl said all of UW’s opt-outs have since rejoined the team.

Swen averaged 5.2 yards per carry during that ‘19 season while McNeely averaged 3.9 last season, though with Valladay, Smith and quarterback Levi Williams (UW’s third-leading rusher last season) getting a bulk of the carries, McNeely’s role as the third back was extremely limited. He finished with 60 yards on just 14 carries.

Still, that’s more experience than the rest of the Cowboys’ scholarship running backs have at this point. Freshmen Alphonzo Andrews Jr. and Joey Braasch, who redshirted last season, have one career carry between the two of them. Brett Brenton (Casper) is an experienced walk-on who’s also an option.

UW signed two more running backs in its 2021 recruiting class in Jordon Vaughn and D.Q. James, but the Texas products won’t join the mix until the summer. The Cowboys also have to find a replacement for departed senior Skyler Miller at fullback, a position that will still be utilized in Tim Polasek’s offense.

The spring will give UW its first chance to start sorting all of that out.

This is the second in a 10-part series previewing each position for Wyoming heading into spring practice. A new position will be published each day leading up to the first day of practice April 6.

1-2 PUNCH: With Trey Smith's decision to return for another season, the senior will pair with Xazavian Valladay to give UW one of the Mountain West's top rushing duos entering next season.

QUALITY DEPTH: The Cowboys have four other scholarship backs on the roster this spring, including Titus Swen, who was UW's third-leading rusher in 2019 before opting out of last season.

The redshirt freshman could join the Cowboys' backfield rotation as early as this week.

Cowboys' sophomore signal caller, who's working his way back from another season-ending injury, has been cleared for activity.

Cowboys want to get the position more involved in the passing game in Tim Polasek's offense.

Wyoming's offensive line has no shortage of seasoned options

Cowboys in line to return more than 140 combined starts up front.

Wyoming getting closer to whole again along the defensive line

Contributors who opted out last season are set to return this spring, but the Cowboys are still dealing with some injuries up front.

Cowboys return their full two-deep at linebacker, including three of their top six tacklers from last season.

The Cowboys' all-conference tailback is healthy again this spring after nagging injuries slowed him down at times the last two seasons.

Wyoming running back Xazavian Valladay looks to escape Boise State's Evan Tyler during their game Dec. 12 at War Memorial Stadium in Laramie. Valladay is back as the headliner of a deep Cowboys backfield.

Wyoming running back Trey Smith looks for an opening against New Mexico during their game Dec. 5 at Sam Boyd Stadium in Las Vegas.