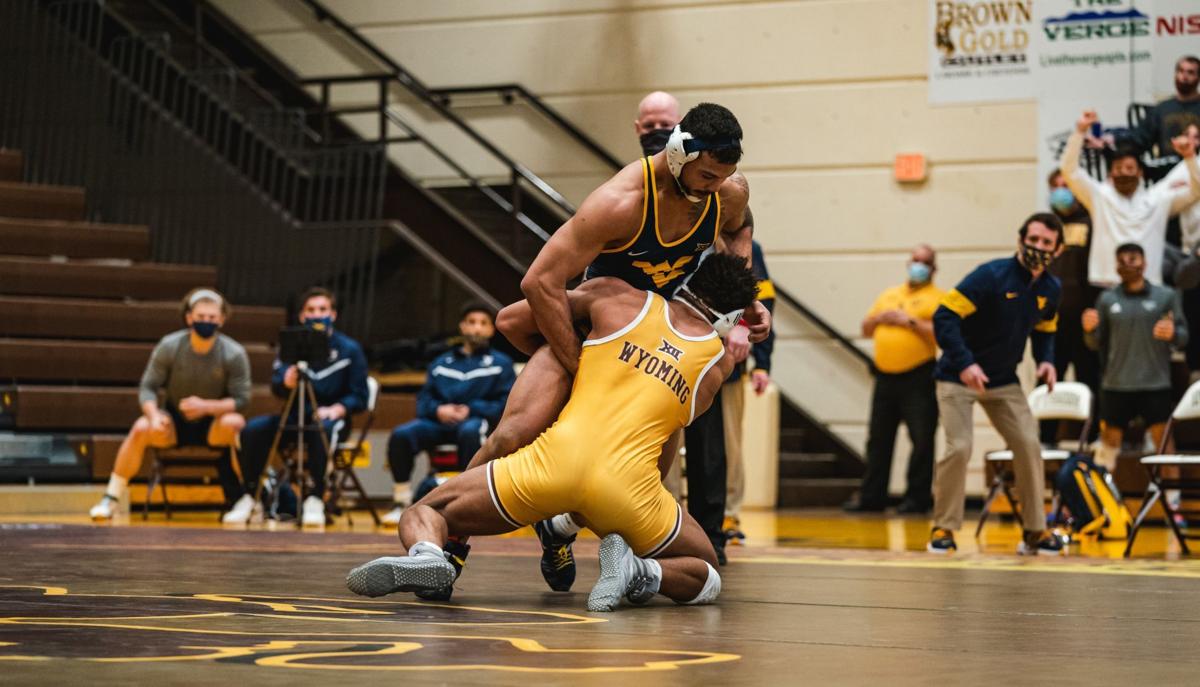 Wyoming's Stephen Buchanan, front, wrestles West Virginia's Noah Adams on Feb. 6 at the UniWyo Sports Complex in Laramie. Buchanan's upset of Adams has been one of the highlights of the season for the Cowboys, who've tweaked their workout regimen over the last couple of seasons. 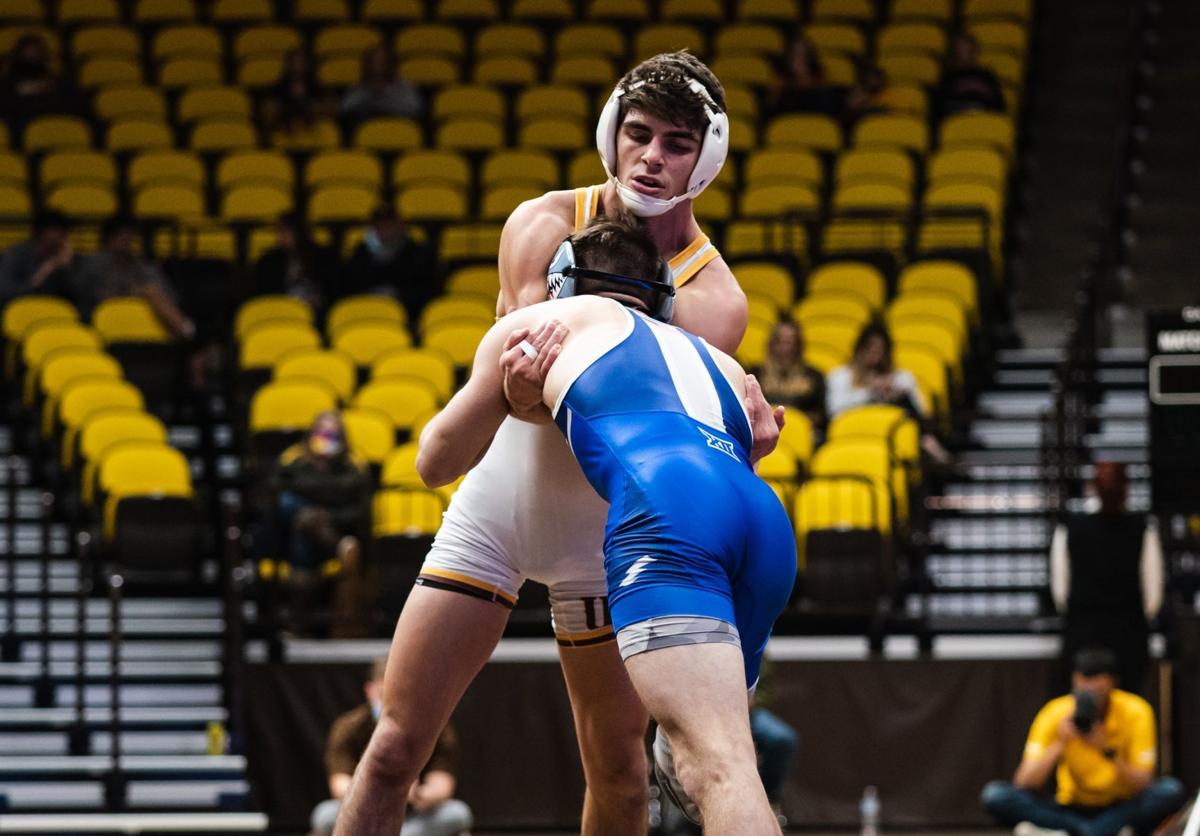 LARAMIE — Stephen Buchanan was chomping at the bit.

Buchanan, Wyoming’s 197-pound wrestler, entered his match against West Virginia’s Noah Adams on Feb. 6 as a heavy underdog. Adams, the nation’s top-ranked wrestler in that weight class at the time, was undefeated on the season and riding a 39-match winning streak, which included a couple of victories over Buchanan the previous season.

Buchanan put up as much of a fight against Adams as anybody. Those two wins came by a combined four points, which Buchanan admitted left a sour taste in his mouth.

“I knew I could wrestle better,” Buchanan said. “Just coming into that weekend, I just had the confidence and I just knew I could do it. So I went and did it.”

Buchanan was on his home mat this time inside the UniWyo Sportsplex, but the rematch was just as competitive as their previous meetings. Buchanan took an early lead before Adams fought back to go in front.

But Buchanan came on strong down the stretch, notching an escape and a takedown to tie the score. Buchanan then tallied the decisive takedown with just seconds left in the match to pull out an 8-7 victory.

“Leading up to that, I think we all were talking to him about, ‘This is going to be fun. This is your match. He’s here. He’s in Laramie. You’re going to wear him out,’” UW wrestling coach Mark Branch said. “And that’s exactly what he did.”

It took all three rounds for Buchanan to notch the win, but it could be argued that kind of signature victory has been months in the making as a result of a workout regimen within the Cowboys’ program that’s undergone some alterations.

Branch, who’s in his 13th season as head wrestling coach, has long been actively involved in UW’s strength and conditioning program. But when the athletic department was looking for a sports performance coach in 2019 to oversee strength training for wrestling, soccer and women’s golf, Branch was intrigued by the opportunity to bring in a different kind of help than he’d been used to.

One of the applicants was Josh Brewer, a former football player and coach who was the head strength coach at Garden City (Kansas) Community College at the time. A Greeley, Colorado, native who played collegiately at Northern Colorado, Brewer, who’s also spent time as an assistant strength coach at Florida Atlantic University, is certified as a functional range conditioning mobility specialist, which specializes in maximizing the range of motion in joints during workouts.

It’s an approach Branch said he had never seen from any strength coaches he’d worked with previously. He wasn’t sure what the other programs thought about Brewer’s training methods, but given how applicable they were to wrestling, Branch said he strongly recommended Brewer for the job.

“A lot of weight coaches are really looking just at strength, and a lot of times, the more strength you have, the less flexibility you have,” Branch said. “And so, as a strength coach, he is a functional range specialist, and that’s his concern. We don’t want to lose any mobility in the joints.”

Branch got his wish, and Brewer has been implementing his version of strength training into the workouts for UW’s grapplers ever since. It includes Olympic lifts and power lifts that incorporate full body movement rather than more traditional weightlifting that often utilizes just one movement and can become mechanical.

“As people in my field tend to hit certain lifts like bench press for instance, you start to get an imbalance in the joint where everything shifts to the training of that movement,” Brewer said. “With bench press in particular, it’s a horizontal abduction movement, where you’re constantly moving in the same plane of motion. The joint gets used to that, the joint adapts to that, and then the joint is limited to that.

“We, in our profession, want to maximize the body and its ability to perform in the sport, especially in a sport like wrestling where they’re put in every position possible and have to activate certain tissue or muscles.”

Explosion and stamina are critical when having to last for long periods of time in a sport like wrestling, so the lower body is emphasized in workouts. The Cowboys go through three hour-long lifting sessions each week in addition to daily afternoon practices, which last roughly two and a half hours. UW also typically holds morning practices twice a week that run about an hour, Branch said.

“Intense I think is a good word,” said redshirt freshman Job Greenwood, a 133-pounder. “You definitely have to love the sport and come in with a positive mindset to get better every day. Otherwise it can get hard. And I think you kind of see it with some guys. Sometimes if I’m not focused on getting better, sometimes it’s hard to get through a practice because it’s definitely intense every day.”

Branch has been implementing rope pulls into his team’s strength training for years, which may be the most grueling workout of them all. Using each hand, wrestlers grab the bottom of two ropes hanging from the ceiling and gradually pull themselves all the way to the top before letting themselves back down.

UW’s wrestlers usually have to do three sets to complete the workout. One set requires going up and down the rope three times in a row without any part of their body touching the floor.

Grapplers in all 10 weight classes have to do them, though the heavyweights get to use shorter ropes. Branch said some wrestlers, particularly newcomers who’ve never done the exercise, aren’t able to pull themselves up the rope on their first few attempts. Even some who’ve been in UW’s program for years struggle with it at times.

But like every other part of the Cowboys’ workouts, the exercise serves a purpose specific to the sport. The wrestlers also do pull-ups to help with grip as well as hand and arm strength.

“So much of what we do is pulling, especially on our feet when we get in our shots and we’re pulling legs and we’re trying to control that at a close range,” Branch said. “Everybody is using their grip and their pulling, but some use it a lot more than others.”

But as UW hits the home stretch of what’s been a solid season to this point, Branch said he’ll likely lighten the workload on his grapplers in an effort to keep them fresh for their most important competitions. The Cowboys (5-3), whose season was delayed until January because of the coronavirus pandemic, finished the dual-meet portion of their schedule two weeks ago with a split against nationally ranked opponents West Virginia and Arizona State.

UW has an extended break before the Big 12 Championships are scheduled to start March 6 in Tulsa, Oklahoma. After that, it’s the NCAA Championships, which nobody got to compete in last spring since the event was canceled in response to the pandemic.

“I’m not saying there’s not another purpose out there, but these guys are used to having the purpose of wrestling and of trying to accomplish their goals,” Branch said. “They’ve had that, most of them, for probably 10- or 15-plus years. To not have that now has been tough, so it’s nice that we’re back in the room, we’re back training, we’re back competing, and now these guys have purpose back in front of them again, which helps really I think keep them in a good place and on track and doing good things.”

The Cowboys had four individual champions at Oklahoma State’s Cowboy Challenge last weekend, the most of any competing team. But none of UW’s grapplers are entering the postseason with more momentum than Buchanan, who knocked off Adams for the second time in as many weeks.

Each Big 12 weight-class champion will automatically qualify for the NCAAs.

“We’re going to peak here at the end of the season,” Greenwood said. “Some guys are really turning it on, and everyone is just getting better every week.”

The Cowboys can’t help but think their training has something to do with that.

“It just took some time to get used to your legs being sore all the time and then having to have to go to like a two-and-a-half hour practice with sore legs, but it just really helps you in your matches,” Buchanan said. “When time is coming down to the end and you’re tired, you can just really push through all that pain.

“We’re working the hardest (of any team) in the country, and we should just believe it.”

Cowboys will play Aggies on the road before hosting Runnin' Rebels.

Cowboys' first-year coach tossed late in the first half, but UW uses six double-figure scorers to respond with first win since Jan. 24.

Cowboys' youngsters come through down the stretch to help UW avoid ending up on the wrong side of the Mountain West's biggest comeback this season.

Wyoming's Stephen Buchanan, front, wrestles West Virginia's Noah Adams on Feb. 6 at the UniWyo Sports Complex in Laramie. Buchanan's upset of Adams has been one of the highlights of the season for the Cowboys, who've tweaked their workout regimen over the last couple of seasons.