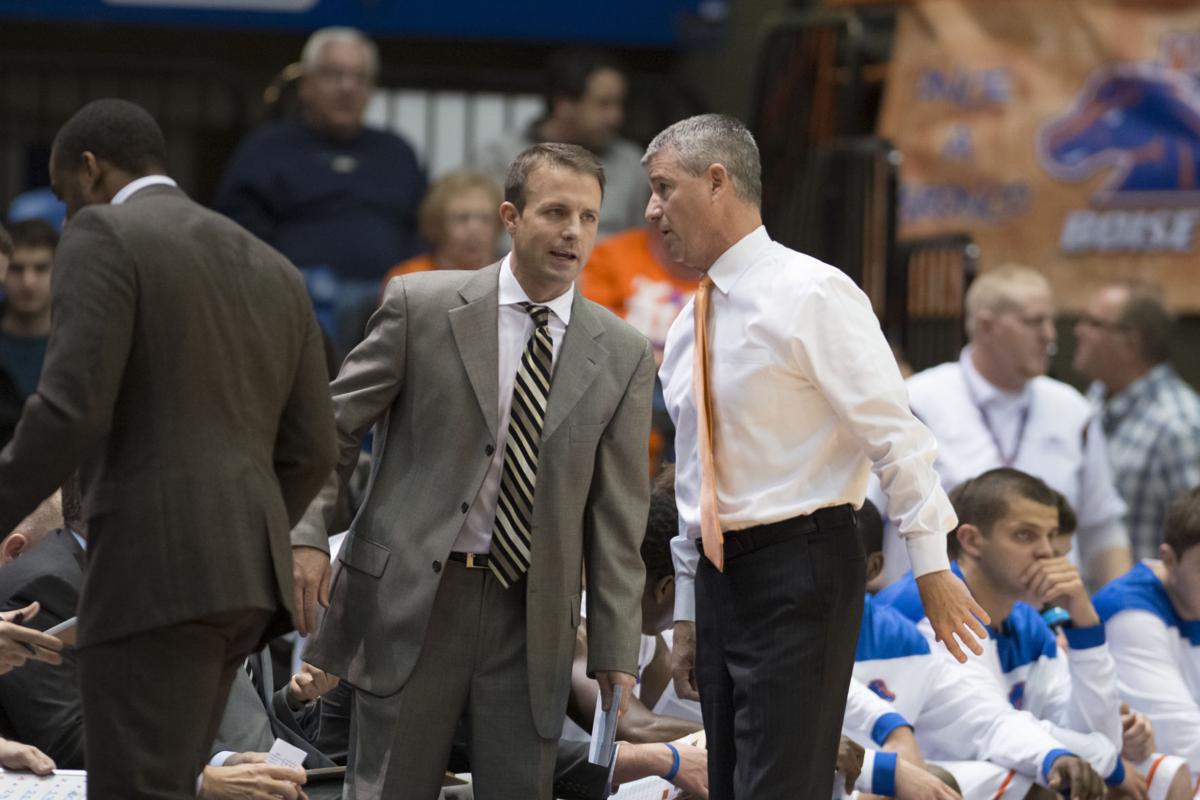 Jeff Linder, then an assistant at Boise State, talks to Boise State head coach Leon Rice, right, during the Broncos' game against Utah State on Jan. 18, 2014, at Taco Bell Arena in Boise, Idaho. Linder and Rice will coach against each other for the first time Monday when Wyoming begins a two-game series against Boise State at the Arena-Auditorium. 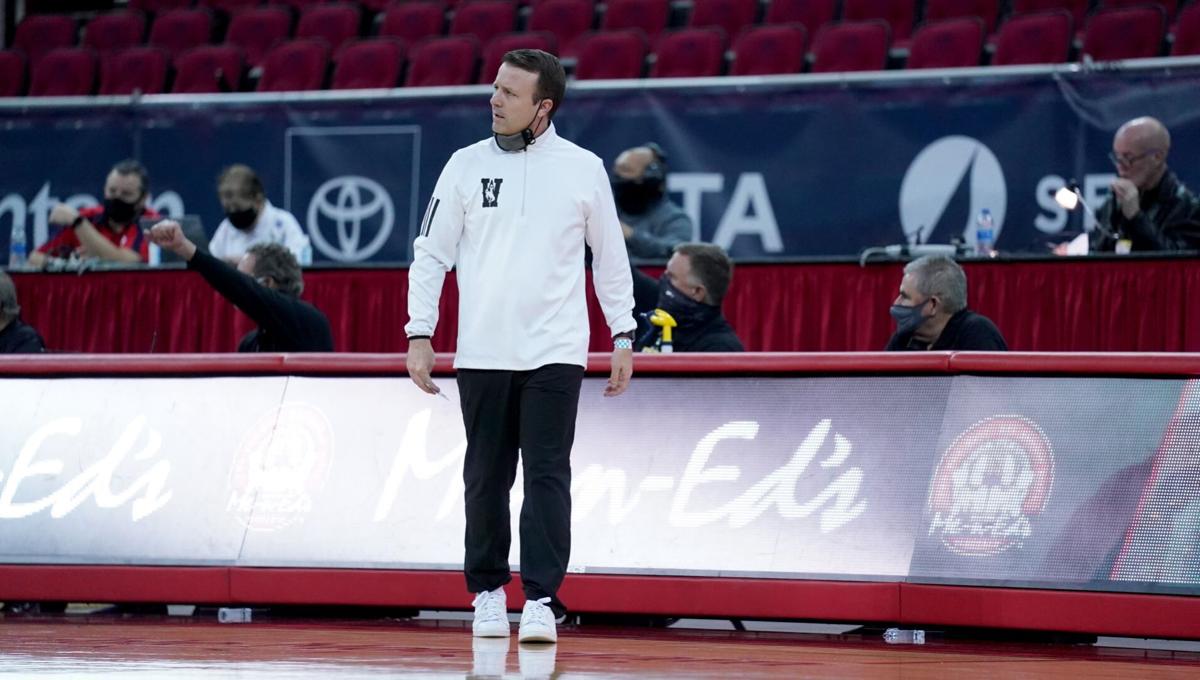 Jeff Linder, who has led Wyoming to a 7-2 record through his first nine games at the helm, spent six seasons as an assistant at Boise State.

LARAMIE — Jeff Linder plans on having some fun with his former boss’s team this week.

Wyoming’s first-year men’s basketball coach is well aware of the strategies Boise State veteran coach Leon Rice is using in preparation for the teams’ two-game series. Having made his share of trips to Laramie as part of Rice’s coaching staff, Linder knows Rice will bring beet juice, a common remedy for altitude sickness. Linder also figures Rice will try to trick some of Boise State’s new players into believing they’re using climate-time machines in practice in order to get acclimated to the 7,220 feet of elevation awaiting them.

“I know all the tricks he’s going to pull,” Linder said. “I’m just going to make sure the altitude sickness sign is in the (visitor’s) locker room. As they walk in, they’re going to see 7,220.”

When UW (7-2, 1-1 Mountain West) and Boise State (10-1, 6-0) begin their two-game series at the Arena-Auditorium on Monday, it will mark the first time Linder and Rice have coached against each other since Linder left Rice’s staff five years ago. Linder spent six seasons at Boise State before taking his first head coaching job at Northern Colorado and eventually finding his way back to the Mountain West Conference.

While the two will be competing against each other over the next three days — the series finale is scheduled for Wednesday — Linder and Rice remain good friends. Linder recently reflected fondly on his time at Boise State, which helped put his head coaching career on the fast track.

Linder said he certainly wouldn’t be the offensive coach he is without Rice’s decision to give Linder autonomy over the Broncos’ offense once Rice hired him in 2010 when Boise State was still a member of the Western Athletic Conference. His teams now well-known for their positionless basketball that often spaces the floor with five shooters, Linder first implemented that European style at Boise State, where Rice put Linder in charge of the Broncos’ offensive game plans.

Boise State finished in the top 3 in scoring in the WAC and the Mountain West in all but one season with Linder on staff. The Broncos also made a pair of NCAA Tournament appearances during Linder’s time in Boise, including their most recent one 2015.

“The biggest thing from Leon was, which is hard for a lot of head coaches, Leon is very comfortable knowing that he doesn’t know everything,” said Linder, who spent his last three seasons at Boise State as associate head coach. “He’s done an unbelievable job of hiring assistant coaches that fill in in terms of making up for things that he’s not as good at.

“He had no ego. And it’s not like when he gives you the offense or defense, he’s looking over your shoulder 24/7. He gives it to you, he lets you do it, and it doesn’t matter whether that’s in a regular-season game, a Mountain West game or whether that’s the NCAA Tournament game in Dayton. And then after the fact, he’s not going to sit there if things go wrong and point blame.”

Rice, who’s in his 11th season at Boise State, has led the Broncos to eight 20-win seasons. Three of those have come since Linder left to take the Northern Colorado job in 2016, and the Broncos look primed for another. Boise State, which is still unbeaten in Mountain West play, will bring a 10-game winning streak into Monday’s matchup.

It’s a string of success that Rice isn’t sure would’ve been possible without the influence of Linder, whom Rice called “very, very creative offensively.”

“I’ve known Jeff for a long, long time and I’ve respected what he’s done throughout his career not just here at Boise but prior to that,” Rice told the Star-Tribune before the season. “So when I got the job at Boise, he was one of my first calls to get him here, and he was huge in laying the groundwork for this program and for what I’ve been able to do here.”

Linder joked that he’s not necessarily looking forward to coaching against his friend given the discrepancy in the teams’ roster makeups. Whether it’s high-major transfers or players who’ve been in the program for multiple years, Boise State is a veteran squad led by NBA prospect Derrick Alston, the Mountain West’s preseason player of the year. Meanwhile, UW, which underwent heavy roster turnover following the coaching change last spring, starts two true freshmen (Marcus Williams and Jeremiah Oden) and has five newcomers in its regular rotation.

In fact, Linder said this year’s group of Cowboys reminds him of his second year at Boise State when a much younger Broncos team was transitioning to the Mountain West during the 2011-12 season.

“We had some ups and downs, but the biggest thing was the experience those guys gained during that year which allowed us to get an at-large big in the NCAA Tournament the following year when the Mountain West got five teams,” Linder said.

Linder said his current players getting those minutes against a much more seasoned team is one thing he’s looking forward to this week. He would also like to beat his friend once or twice along the way, as strange of an experience as it might be.

“It’s going to be different seeing Leon down on the other side,” Linder said.

A REUNION: Five years after leaving Leon Rice's staff at Boise State, Wyoming's Jeff Linder will coach against Rice for the first time this week.

HE SAID IT: "It’s going to be different seeing Leon down on the other side." -- Linder.

Only two Mountain West teams picked to finish lower than the Cowboys heading into 2020-21 season.

The Broncos, who've won 10 straight games, are one of two unbeatens left in Mountain West play.

Jeff Linder, then an assistant at Boise State, talks to Boise State head coach Leon Rice, right, during the Broncos' game against Utah State on Jan. 18, 2014, at Taco Bell Arena in Boise, Idaho. Linder and Rice will coach against each other for the first time Monday when Wyoming begins a two-game series against Boise State at the Arena-Auditorium.

Jeff Linder, who has led Wyoming to a 7-2 record through his first nine games at the helm, spent six seasons as an assistant at Boise State.