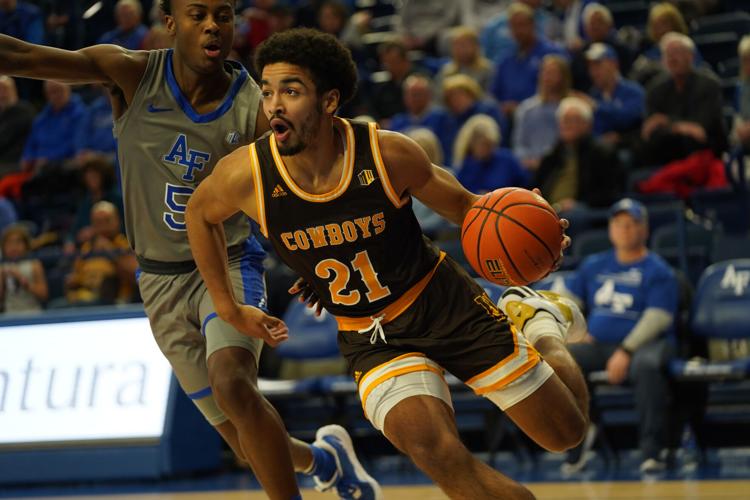 Wyoming's Noah Reynolds drives to the basket in the Cowboys' game against Air Force on Tuesday at Clune Arena in Air Force Academy, Colo. 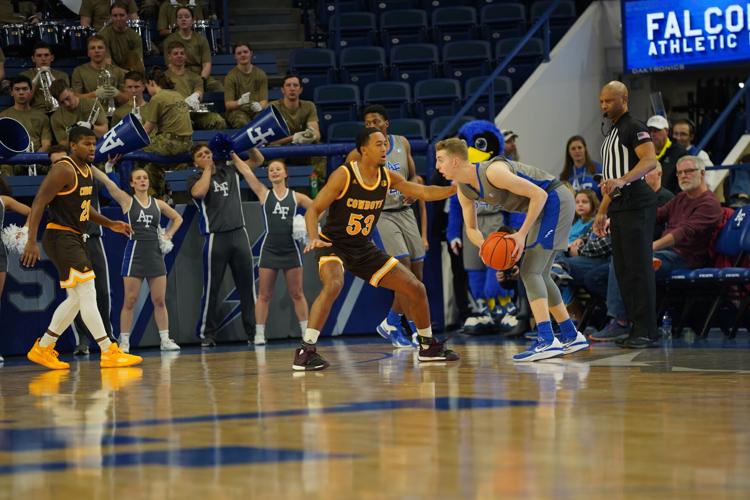 U.S. AIR FORCE ACADEMY – The Pokes’ 13th starting lineup of the season was not the charm.

Wyoming, which was without five players, including Hunter Maldonado and Graham Ike, wilted in the second half and fell 82-74 to Air Force on Tuesday night at Clune Arena.

“I was exhausted,” Ethan Anderson said after the undermanned visitors gave up 50 points in the second half. “Air Force runs a very good offense and it’s designed to get you tired. They use the entire shot clock and when you’ve got six or seven guys it’s bound to happen.

“We’re missing Maldo and Graham, that’s Wyoming basketball right there in a nutshell.”

Head coach Jeff Linder inserted 7-footer Nate Barnhart into the starting lineup for the first time. The freshman finished with 11 points on 5-for-5 shooting and five rebounds.

Barnhart’s counterpart, Beau Becker, who was averaging 5.1 points and had made seven 3s all season, finished with a career-high 23 points with five made 3s to lead the Falcons (12-7, 3-3).

Sagging on Becker and protecting the paint was the scouting report Barnhart was asked to stick to.

“He did tremendous, and he was a guy that played 30 minutes and did not look tired the entire time,” Linder said of Barnhart. “That’s a guy that hadn’t been on the floor for a lot of minutes. So, for him to come out on the floor and do what he did was tremendous. He was the key to what we were trying to do defensively and those threes that his man got that was the game plan.”

UW shot 54.9% from the field but allowed Air Force to recover from a slow start by shooting 65.4% in the second half.

Barnhart responded on the other end with a bucket and Reynolds completed a three-point play to tie the score 43-43.

Air Force started to pull away with a 9-0 run. Becker hit back-to-back shots to give the Cadets a 10-point lead and a 3 by Ethan Taylor made the score 73-62.

“The first half we were really guarding, the second half they started knocking down some shots,” Barnhart said.

The Cowboys led by as many as 12 points but settled for a 36-32 cushion at the intermission despite shooting 56% from the field and holding the Falcons to 40.7%.

Reynolds had 16 points at the break but had his shot blocked on UW’s final possession, which led to a 3 by Camden Vander Zwaag with four ticks left.

The Cowboys had a 22-12 scoring edge in the paint and a 17-11 rebounding advantage in the first half.

Barnhart had four quick points and three rebounds to help UW get off to a 10-4 lead before the first media timeout.

The Falcons missed 11 consecutive 3s and the Pokes took advantage of the cold shooting by extending the lead to 22-10 on a deep 3 by DuSell with 8:41 remaining in the first half.

After a steal and layup by Vander Zwaag cut Air Force’s deficit to six points, Jake Kyman hit a timely 3 to make the score 31-22.

Kyman missed a 3 in transition and then lost Vander Zwaag, who swished an uncontested shot behind the arc to get the Falcons within 33-29 with 51 seconds remaining.

Reynolds was fouled on a 3 and made all three free throws to give UW a seven-point lead before the sloppy final sequence.

Maldonado, who hit the game-winning layup high off the glass and finished with 31 points in UW’s 63-61 win here last season, made the trip but did not suit up due to a rib injury.

The super senior from Colorado Springs left Saturday’s loss to Boise State early and was having trouble breathing afterwards.

“There’s no doubt in my mind if Graham Ike laces his shoes up we’re top two in the conference again,” Anderson said. “But I love this team we’re playing with now, this group of guys, and I will continue to give everything I have.”

Cowboys' super senior was "struggling to breathe" in the locker room after a hard fall in the final minutes of UW's loss to Boise State on Saturday night.

Wyoming Cowboys are patiently waiting for Graham Ike's return, but could have Noah Reynolds back for Boise State game Saturday night at the A-A.

The Pokes drop their sixth consecutive game and fall to 0-4 in Mountain West play with 83-63 loss at Utah State.

Pokes are looking to end eight-game losing streak with a win over Border War rival Colorado State on Saturday at the Arena-Auditorium.

Wyoming Cowboys can climb out of Mountain West basement at UNLV

The Pokes, who snapped an eight-game losing streak with a 58-57 win over Colorado State, will try to build on first Mountain West win against UNLV.

Wyoming's Noah Reynolds drives to the basket in the Cowboys' game against Air Force on Tuesday at Clune Arena in Air Force Academy, Colo. 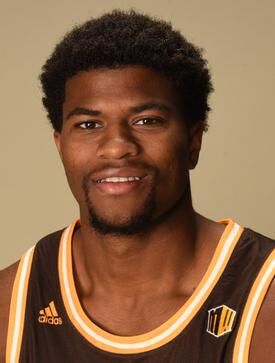