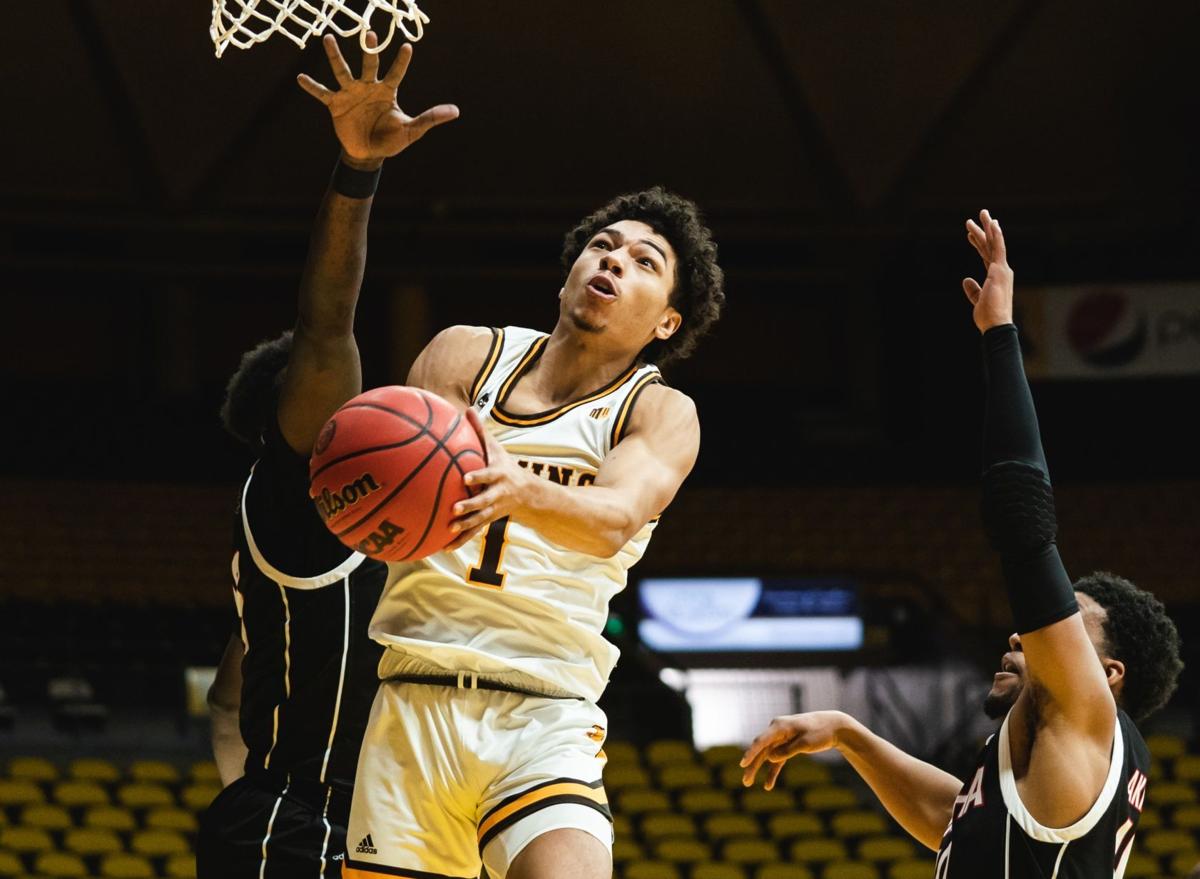 Wyoming freshman guard Marcus Williams goes up for a shot against Omaha on Dec. 17 at the Arena-Auditorium in Laramie. 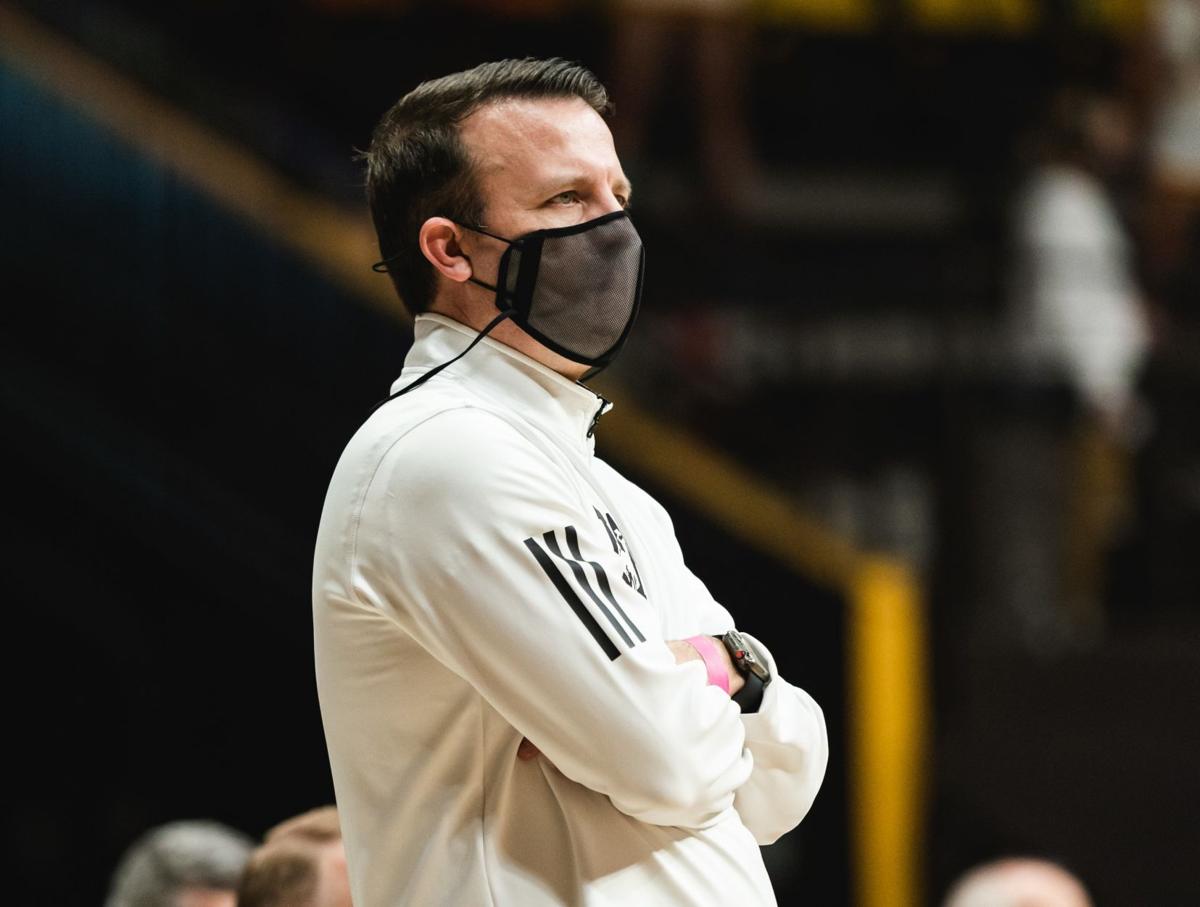 Wyoming coach Jeff Linder looks on during the Cowboys' game against Mississippi Valley State on Nov. 28 at the Arena-Auditorium in Laramie. Linder was previously an assistant under Boise State head coach Leon Rice.

But with the Cowboys entering the teeth of their Mountain West schedule, they will soon get a more accurate gauge of just how legitimate their record is. Consider Boise State the first real litmus test.

UW (7-2, 1-1 Mountain West) has won seven of its first nine games, a far cry from the struggle it’s been the past two seasons when the Cowboys failed to notch double-digit wins in either one. But not yet having faced a team in the top 190 of the NET rankings, UW’s level of competition hasn’t exactly been top notch.

That’s going to change in a hurry.

Starting with their two-game series against Boise State beginning Monday, the Cowboys will play 10 games against the top five teams in the Mountain West standings over the next month. Those include road series at preseason league favorite San Diego State and Utah State and home series with Colorado State and Nevada.

And Boise State (10-1, 6-0) may be the best of the bunch. The Broncos are playing like it, at least. Boise State dropped its season opener to No. 11 Houston but hasn’t lost since, ripping off 10 straight wins to find itself tied with Utah State atop the Mountain West standings.

“Our young guys, they get a really good gauge of what it’s like to play against a top 100, top 75 or in this case, Boise, you’re talking about probably a top 25 team,” Linder said. “It’s a good measuring stick.”

The league’s preseason player of the year, stretch forward Derrick Alston, is averaging 17.8 points per game, but the Broncos are far from a one-tricky pony.

A handful of high-major transfers has given Boise State more size and athleticism, particularly in the frontcourt. Oregon transfer Abu Kigab is averaging 12.9 points and six rebounds per game while 6-foot-9 wing Emmanuel Akot, a transfer from Arizona, is contributing nine points and 4.5 boards a night, complementing other double-digit scorers Marcus Shavers Jr. (14 points per game) and RayJ Dennis (11.6).

It doesn’t help that UW will again be without forward Eoin Nelson, who’s out indefinitely with a lower leg injury. UW split its conference-opening series at Fresno State but ended it on a sour note, suffering its worst loss of the season in a 20-point setback on Jan. 4.

This week’s series will be a matchup of the highest-scoring teams in the Mountain West, but the Cowboys had their worst shooting performance of the season in the series finale against Fresno State. But Linder is more concerned about UW’s defense against the Broncos, who also lead the conference in field-goal percentage (47.3) and have the third-best rebounding margin (plus-8.2).

UW is bottom 3 in the Mountain West in field-goal percentage defense (45.5) and rebounding margin (minus-3.4), making it critical for the Cowboys to be able to convert high-percentage shots and limit Boise State’s chances for the same.

Linder has more familiarity with Boise State than most other Mountain West teams having spent six seasons as an assistant on Leon Rice’s staff from 2010-16. The Cowboys will look for any advantage they can get as their schedule strengthens considerably.

“I know what they’re going to do, but it’s a matter of can you stop it?” Linder said. “That’s what it’s going to boil down to.”

STEPPING UP THE COMPETITION: Four of Wyoming's next six Mountain West series are against teams in the top 70 of the NET rankings. UW has yet to play a team in the top 190.

HE SAID IT: "Our young guys, they get a really good gauge of what it’s like to play against a top 100, top 75 or in this case, Boise (State), you’re talking about probably a top 25 team." -- UW coach Jeff Linder

Cowboys will largely stick to their man defense despite the struggle to defend opposing teams' bigs in the post.

After sharing bench with him for 6 seasons, Wyoming's Linder set to coach against Boise State's Rice for first time

Linder developed his offense and put his head coaching career on the fast track during his time as an assistant at Boise State.

Wyoming freshman guard Marcus Williams goes up for a shot against Omaha on Dec. 17 at the Arena-Auditorium in Laramie.

Wyoming coach Jeff Linder looks on during the Cowboys' game against Mississippi Valley State on Nov. 28 at the Arena-Auditorium in Laramie. Linder was previously an assistant under Boise State head coach Leon Rice.