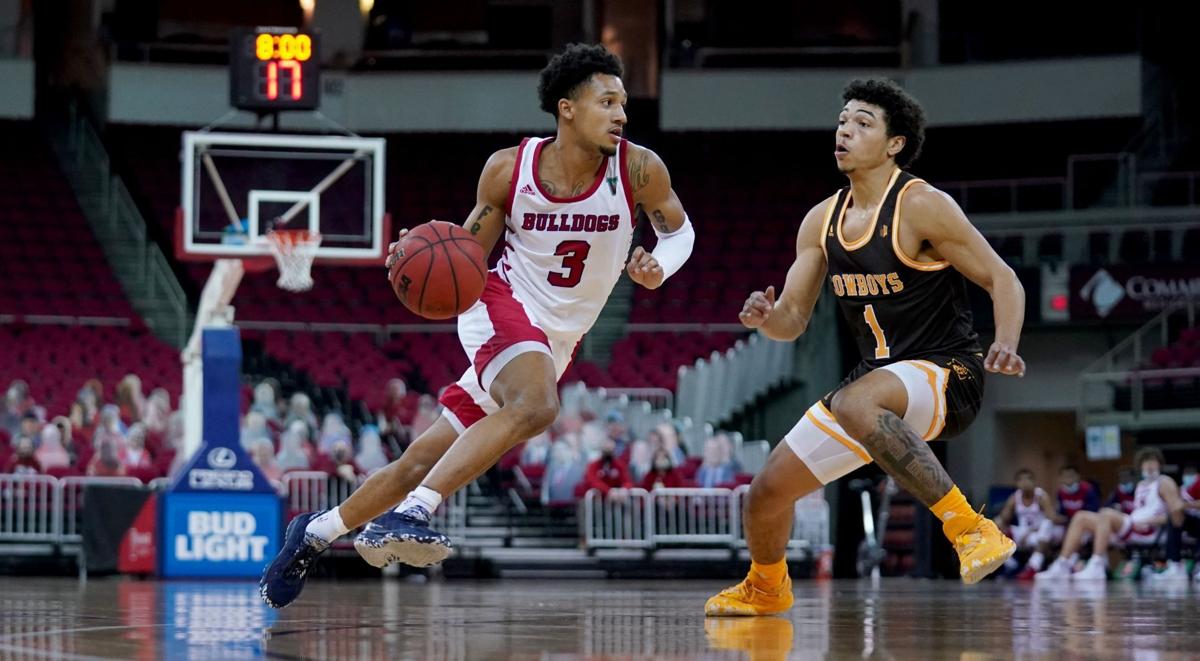 Wyoming's Marcus Williams defends Fresno State's Isaiah Hill during their game Saturday at the Save Mart Center in Fresno, Calif. UW won the game 78-74 before losing the series finale against the Bulldogs on Monday, which ended the Cowboys' six-game winning streak. 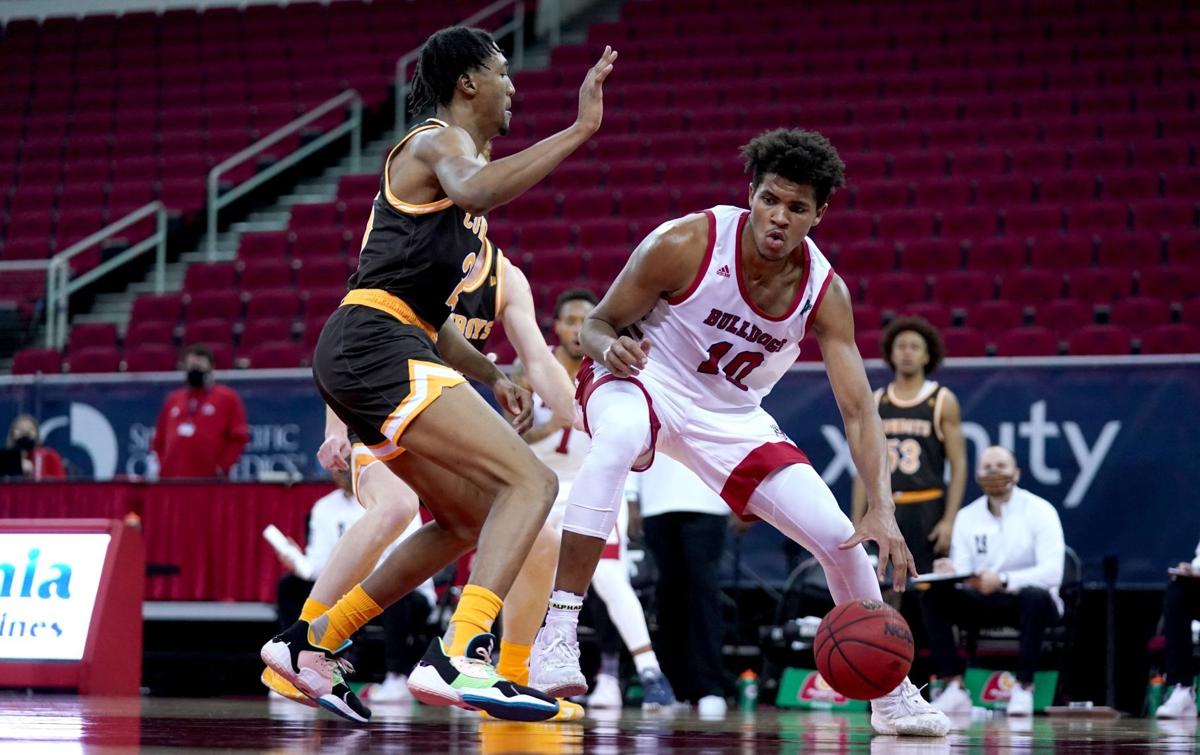 Wyoming's Jeremiah Oden defends Fresno State's Orlando Robinson during their game Saturday at the Save Mart Center in Fresno, Calif.

LARAMIE — Orlando Robinson was the latest big to have a field day against Wyoming.

Technically, Fresno State’s sophomore forward had a career day in the teams’ series finale Monday, finishing with a career-high 33 points and 13 rebounds. Robinson’s dominance went a long way toward ending UW’s six-game winning streak in a convincing 81-61 win for the Bulldogs.

Fresno’s 7-footer is also a rare talent. With his ability to score inside and out, defend the rim and clean up the glass, Robinson, the only player in the Mountain West averaging a double-double for the season, is a bonafide NBA prospect.

“Not every team in this league has an Orlando Robinson,” UW coach Jeff Linder said.

UW (7-2, 1-1 Mountain West) has faced a couple of unique bigs already this season. Utah Valley’s Fardaws Aimaq, who went for 27 points and 20 rebounds in UW’s 93-88 win back on Dec. 12, is the nation’s leading rebounder. But regardless of the skill level, teams have made it a point to attack the Cowboys’ lack of girth and experience on the interior all season.

UW forward Eoin Nelson’s status is uncertain after he missed both games against Fresno with a lower leg injury while freshman center Graham Ike (ACL surgery) is still waiting to be medically cleared for competition, but many of those performances came with Nelson in the rotation.

UW has given up 342 points in the paint this season, which has played a major part in opponents shooting 45.5% from the field against the Cowboys, the third-highest clip in the Mountain West this season.

UW has largely overcome that by shooting the second-highest clip in the league (46.4%), but is Linder concerned with his team’s post defense? Not exactly.

“We’re not going to be San Diego State right now defensively,” Linder said after Omaha’s frontcourt duo of Wanjang Tut and Matt Pile went for 44 points and 17 rebounds in UW’s 82-78 win on Dec. 17. “That’s just not who we are, and that’s what we’re going to be. I could sit there and try to beat that into them, but you know what, we’re going to have to be a little different right now. … Sometimes you’ve got to give up some things in order to take away some things.”

Having a rotation that allows UW to often spread teams out with five shooters on the floor — Nelson and fellow forward Hunter Thompson are the only UW players taller than 6-foot-8 — Linder is OK with post players scoring a bulk of the opponents’ points against UW’s man defense, which the Cowboys have rarely deviated from. Even with Robinson shooting 12 of 16 from the floor Monday, the Cowboys played him one-on-one almost exclusively.

UW occasionally ran a second defender at him in the latter stages of the game, but that was the extent of the Cowboys’ defensive variation. UW could’ve mixed in a zone and collapsed on the bigger Bulldogs, but Linder said that’s not something he’s all that interested in as the Cowboys’ first-year coach continues to work on implementing his style of play.

“Last time I checked, other than Syracuse, not too many teams have won league championships and won games in the NCAA Tournament by playing zone,” Linder said. “So at the end of the day, we’ve got to build a foundation. And our foundation is going to be a man-to-man defensive team, and we’re not going to sacrifice trying to throw in a zone here or there.”

That doesn’t mean UW can’t do more to try to slow down opponents’ bigs moving forward. Linder said doubling the post may be something the Cowboys look at doing more frequently as teams continue to try to pound the ball inside, but primarily playing teams straight up on the defensive end allows UW’s wings and guards to stick to shooters on the perimeter, which, in theory, is the tradeoff.

Opposing post players may get their points, but UW’s idea is to limit everyone else’s scoring, particularly the farther away they are from the basket. The plan has largely worked as the Cowboys have allowed the second-fewest 3-point shot attempts in the league and are holding teams to 34% from beyond the arc.

UW’s problem its last time out was its inability to keep the other Bulldogs in check. Fresno made a living taking the Cowboys off the bounce and getting high-percentage shots in the lane, drawing fouls or both. Guard Christian Gray complemented Robinson’s efforts by scoring a career-high 17 points on 7 of 9 shooting without attempting a single 3, and fellow guard Deon Stroud added 11 points and five rebounds.

Of Fresno’s 56 field-goal attempts, 38 of them came inside the 3-point line. The Bulldogs finished with 46 points in the paint, and it didn’t help that UW was uncharacteristically off the mark with its own shots. The highest-scoring team in the Mountain West, the Cowboys also had their share of high-percentage looks but converted just 42% of their attempts from 2-point range (17 of 40) en route to their worst shooting performance of the season (39%).

In other words, it wasn’t just Fresno’s interior presence that sent UW to the loss column for the first time since November. The Cowboys have lost just twice despite yielding almost 40 points a game in the paint and getting outrebounded by 3.4 boards on average.

“I was at Boise State back in the day (as an assistant coach), and they had a really good post player at Saint Mary’s in Brad Waldow,” Linder said. “And he had about 35 against us, but we ended up beating Saint Mary’s by about 10. I know what we do works, but at the end of the day, you’ve got to be able to sit down and guard and be able to rebound. I’m more worried about our rebounding than whether a post player goes and scores 30 points on us.”

UW is hoping Nelson’s injury isn’t anything serious while Ike should be ready for his first game action later in the conference season. Still, it’s not going to get any easier as the league slate heats up.

Next up for the Cowboys is a series against Linder’s former team, Boise State, beginning Monday at the Arena-Auditorium. The Broncos (9-1, 5-0), who’ve won nine straight heading into their game Friday against Air Force, feature another NBA prospect in 6-9 wing Derrick Alston (17.7 points per game) and 6-10 forward Mladen Armus (6.9 rebounds per game).

There are more quality bigs UW will have to contend with in Mountain West play, including San Diego State’s Nathan Mensah, Colorado State’s David Roddy and Utah State’s Neemias Queta, a preseason all-conference selection. UNLV freshman center Jhaylon Martinez could also join the list should the Cowboys’ series against the Runnin’ Rebels be rescheduled as expected.

They’re all likely to get theirs against UW, too. But Linder can live with the Cowboys taking their lumps down low for now in order to continue developing his program’s long-term defensive identity.

“These young guys have to know that you’ve got to sit down and guard, and you’ve got to be able to do the right things. You’ve got to build those habits through the possessions of the game,” Linder said. “I could throw a 2-3 zone out there for 25 possessions. Well, that’s not going to get (freshman guard) Marcus Williams any better in terms of trying to beat San Diego State, Boise State or Utah State. We’ve got to develop habits, and that’s what we’re going to continue to do.”

INSIDE STRUGGLE: With teams making a point to work the ball inside against Wyoming's smaller, inexperienced frontcourt, the Cowboys are allowing nearly 40 points per game in the paint.

HE SAID IT: "Our foundation is going to be a man-to-man defensive team, and we’re not going to sacrifice trying to throw in a zone here or there." -- UW coach Jeff Linder.

Cowboys' first loss since Nov. 30 was their worst in almost a full calendar year.

Fresno State's 7-footer goes for 33 points and 13 rebounds while the Cowboys shoot a season-low 39% from the field.

Cowboys' sophomore big will miss his second straight game Monday as UW awaits word on the severity of his injury.

The Broncos, who've won 10 straight games, are one of two unbeatens left in Mountain West play.

Cowboys, who have lost the rebounding battle in all but three of their games, are coming off a minus-24 deficit on the glass in their series-opening loss to Boise State.

Wyoming's Marcus Williams defends Fresno State's Isaiah Hill during their game Saturday at the Save Mart Center in Fresno, Calif. UW won the game 78-74 before losing the series finale against the Bulldogs on Monday, which ended the Cowboys' six-game winning streak.

Wyoming's Jeremiah Oden defends Fresno State's Orlando Robinson during their game Saturday at the Save Mart Center in Fresno, Calif.