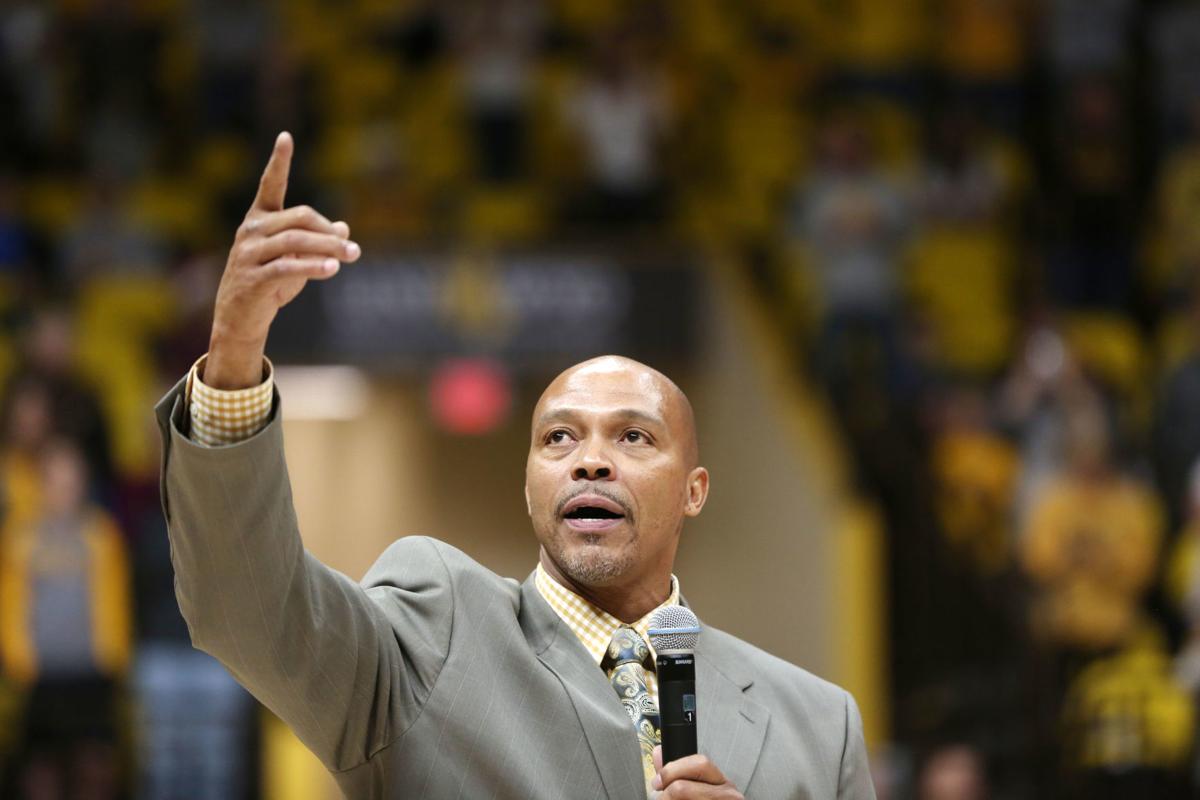 Fennis Dembo points to his retired number 34 jersey in a halftime ceremony in his honor Saturday, December 7, in Laramie. 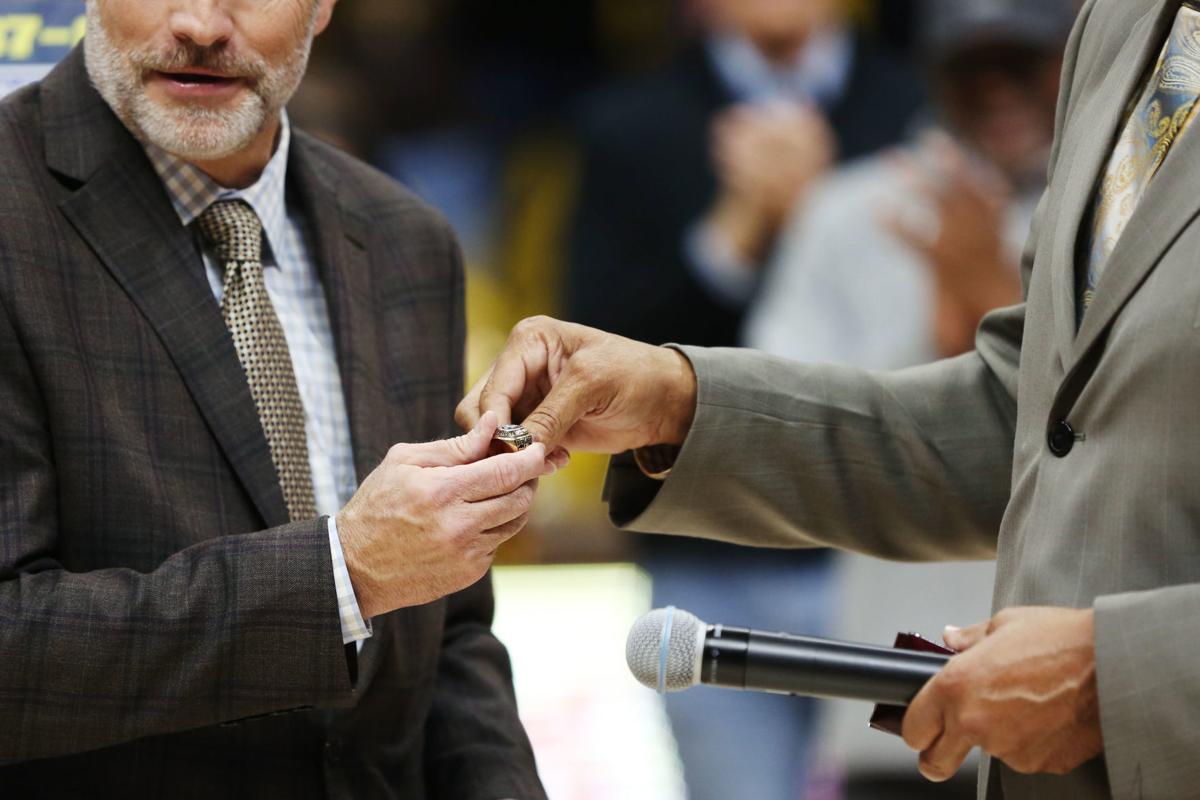 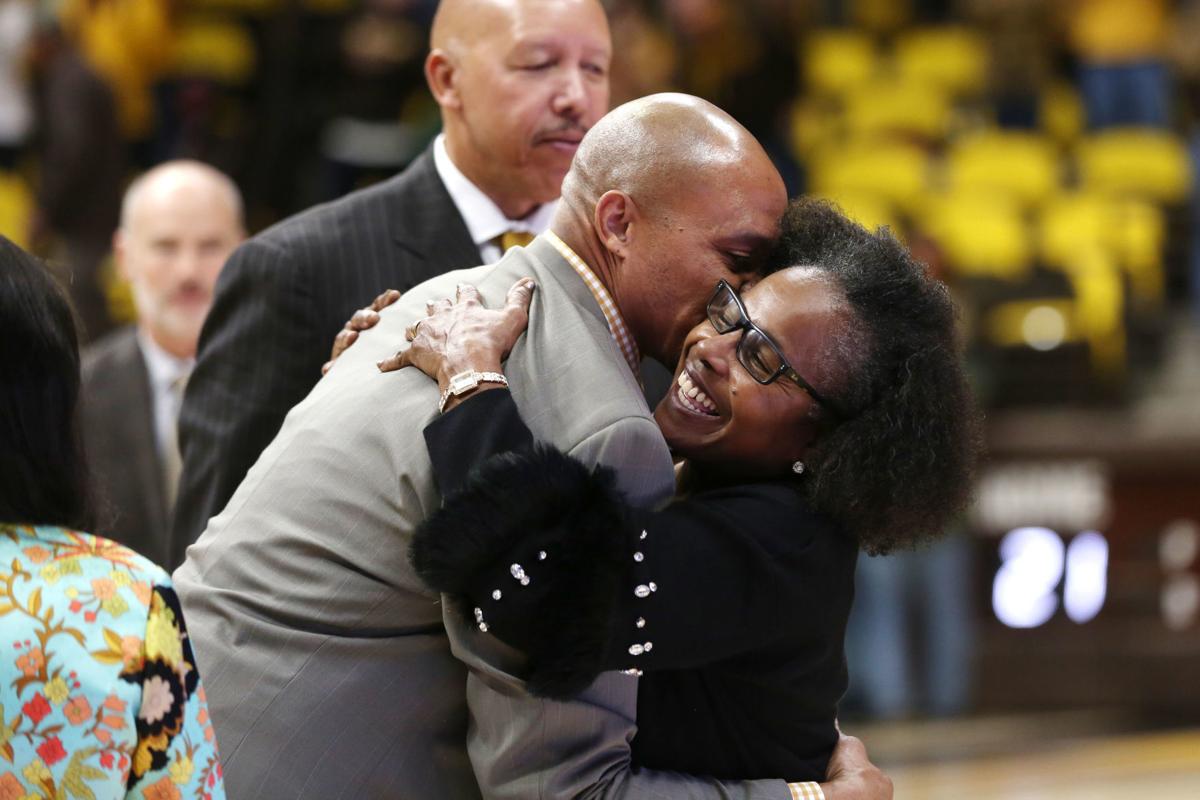 Fennis Dembo hugs his mother after his No. 34 jersey is retired in a ceremony during halftime of Wyoming's game against New Mexico Saturday, December 7, in Laramie.

LARAMIE — The memories are still fresh for Fennis Dembo.

There was the run to the Sweet Sixteen as a junior — the furthest Wyoming’s basketball program has ever advanced in the NCAA Tournament. There was the time he graced the cover of Sports Illustrated’s college basketball preview magazine heading into his final season with the Cowboys complete with the title, “A Dazzling Dude.” And that the run to the National Invitation Tournament final during his sophomore season, which produced the lasting image of Dembo sitting on the rim in celebration following a quarterfinal win over Clemson that punched Wyoming’s ticket to New York City.

“Most of all, sitting up on the rim and things like that,” Dembo said with a laugh. “As fans and players, we shared a lot of memories here through the years.”

He was better known as “The Electric Man” to the Wyoming faithful who watched his sheer athleticism and high-flying acts help him score 2,311 points during his four years with the Cowboys. It’s fitting given the atmosphere Saturday inside the Arena-Auditorium, where Dembo returned to make another memory.

Dembo’s No. 34 jersey was retired during halftime of the Cowboys’ game against New Mexico on Saturday. Flanked by Wyoming athletic director Tom Burman, family, friends and some of his former teammates, Dembo stood near midcourt as the jersey he used to wear was lifted into the rafters while many of the 3,659 fans in attendance gave him a standing ovation.

He joins Kenny Sailors, the creator of the jump shot, as the only Wyoming players to have their numbers retired.

“It’s a great honor to come back home and to have my jersey retired next to Kenny Sailors,” Dembo said. “I tell people all the time that Kenny, he’s on a different universe than I could ever be on. So it’s a great honor just to be up there in the rafters next to him.”

Inducted into the UW Athletics Hall of Fame in 1993, Dembo was a three-time first-team all-Western Athletic Conference selection and was named the WAC Player of the Year in 1987. Nobody in Wyoming men’s basketball history has scored more points in a career than Dembo, and he also used to hold the program record for rebounds (954, which currently rank third in school history) and free throws (second).

Dembo helped lead the Cowboys past Florida and into the NIT final during that 1985-86 season before Wyoming fell to Ohio State in the championship game. During Wyoming’s Sweet Sixteen run the following year, one in which Dembo dropped 41 points in the Cowboys’ second-round upset of the Reggie Miller-led UCLA Bruins, he was the tournament’s leading scorer at 27.8 points per game.

“One day, I walked into the arena, I sat down, I started looking at Kenny Sailors’ jersey, and I’m thinking, ‘What can we do to honor somebody like Fennis?’” Burman said. “He transformed a generation of basketball at Wyoming. He wasn’t just a really good player, but he was personality. He had a charisma and a style that we’ve never seen before or since at the University of Wyoming.”

A native of Mobile, Alabama, who got to Wyoming by way of San Antonio, Dembo was taken by the Detroit Pistons with the 30th overall pick in the 1988 NBA Draft and won a championship in his only season with the Pistons. But his status as arguably the greatest basketball player in Wyoming history is what had him back at his old stomping grounds inside the Arena-Auditorium, where he had a surprise waiting for Burman.

Dembo reached in his jacket pocket toward the end of the halftime ceremony and pulled out the championship ring he’d won with Detroit. He gave it to Burman, calling it a marriage between he and Wyoming’s athletic department.

“We don’t get many NBA champions that come through 7220, but we’ve got one right here,” Burman said. “And we’re thrilled to have him.”

Wyoming basketball great Fennis Dembo looks on as his No. 34 jersey is lifted into the rafters at the Arena-Auditorium during halftime of the …

Fennis Dembo points to his retired number 34 jersey in a halftime ceremony in his honor Saturday, December 7, in Laramie.

Fennis Dembo hugs his mother after his No. 34 jersey is retired in a ceremony during halftime of Wyoming's game against New Mexico Saturday, December 7, in Laramie.