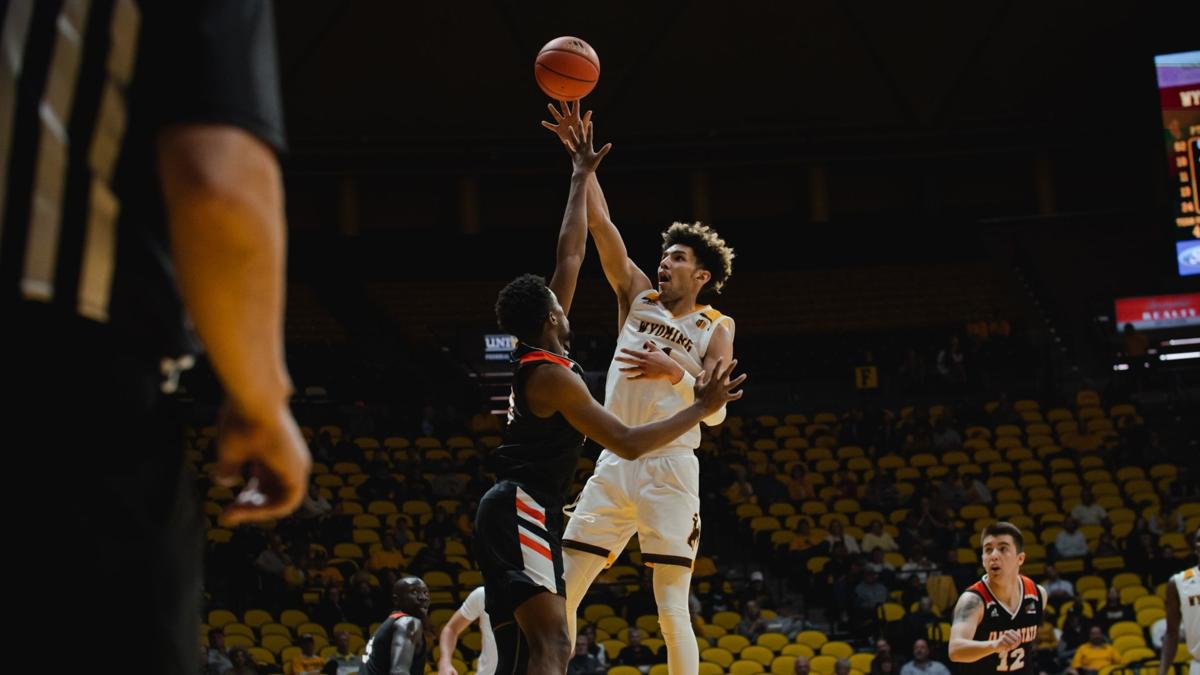 Wyoming's Hunter Maldonado shoots over an Idaho State defender during their game Tuesday at the Arena-Auditorium in Laramie. 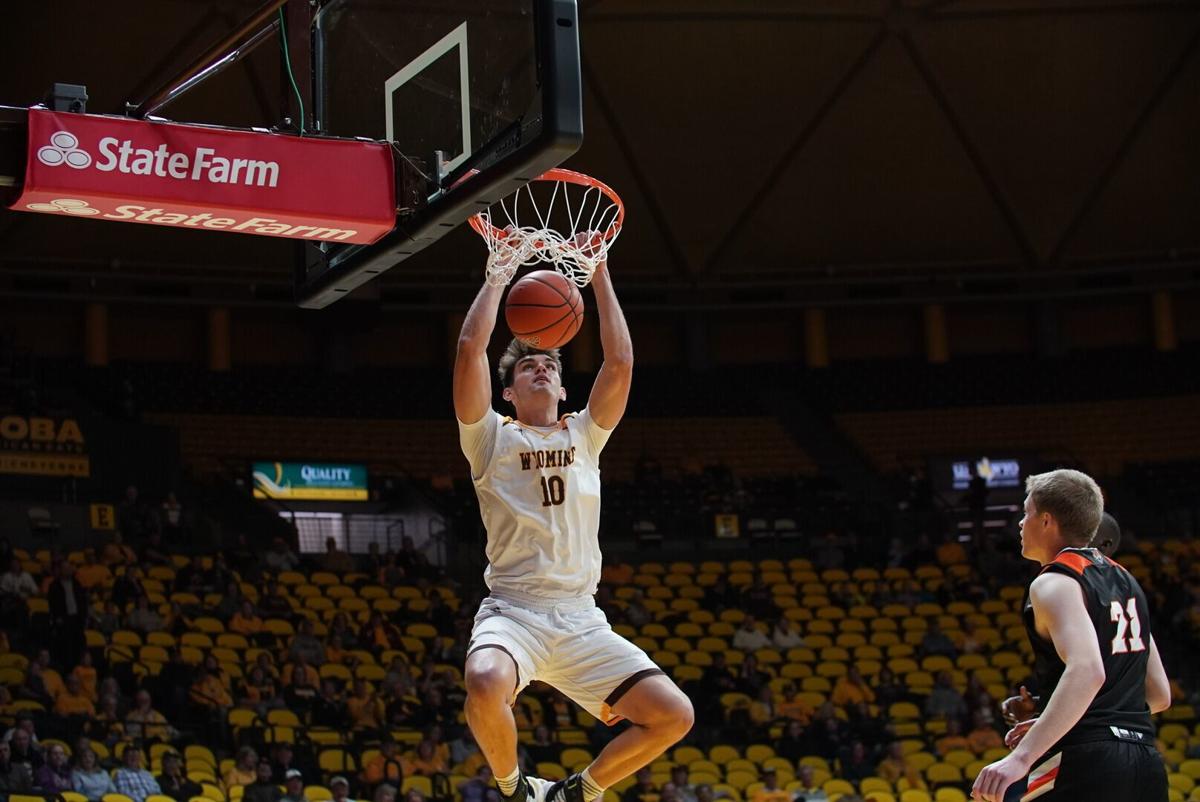 Wyoming's Hunter Thompson dunks in the Cowboys' victory over Idaho State on Tuesday at the Arena-Auditorium in Laramie.

Idaho State found out out Tuesday night just how good Wyoming's sophomore guard is feeling heading into this season.

Maldonado scored a career-high 32 points to lead the Cowboys to a 54-40 win in both teams’ season opener at the Arena-Auditorium. Playing in just his second game since being shut down with back and knee injuries last December, Maldonado scored 28 of his points in the second half to help the Cowboys pull away for their first season-opening win since 2017.

Wyoming shot 51.4 percent from the field despite no other Cowboy scoring more than six points. The Cowboys held ISU to just 31.9 percent shooting, including a 16.7-percent clip (4 of 24) from 3-point range, in allowing their fewest points to a Division I opponent in a season opener since a 42-39 win over Montana State to start the 1949-50 season.

Wyoming used an 11-0 run midway through the second half to take a 35-21 lead and led by as many 15. Maldonado had nine of those points, and after ISU got within six after a quick 8-0 run with 6:16 left, he came off the bench after a brief breather to stop it with another basket.

"If we've got a hot hand, we're going to give it to the hot hand," forward Austin Mueller said. "So going forward, if someone is heating up like that, we'll feed it to them."

After scoring 23 points in Wyoming's exhibition win last week, senior guard Jake Hendricks got up just three shots and finished with four points. That was largely a result of ISU extending its man defense on the Cowboys' top 3-point shooter as well as big man Hunter Thompson, who attempted just three more shots after scoring the Cowboys' first four points of the season.

Whether it was on the perimeter or in the post, that left Maldonado isolated with more room to operate. Maldonado, whose previous career-high was 21 points against Grambling last November, shot 12 of 19 from the field and 8 of 10 from the free-throw line. Malik Porter led ISU with nine points and eight rebounds.

"I thought it was collective," Wyoming coach Allen Edwards said. "One will look at Maldo and say, '32 and there wasn't a lot of other scoring.' But having Jake Hendricks on the floor and the way they wanted to play Jake, take him away and how they hugged up on Thompson kind of opened up the floor a little bit more spacing-wise for Maldonado to be effective."

While the Cowboys’ offense struggled to find much rhythm outside of Maldonado, Wyoming’s defense was there from the start in helping the Cowboys to a 21-18 halftime lead. It was the fewest first-half points allowed by Wyoming in Edwards’ four seasons at the helm.

The Bengals had more turnovers (4) than field goals (3) through the first 12 minutes and change. Wyoming held ISU without a bucket for nearly 10 full minutes of game time until Porter’s dunk with 4:41 left in the half ended the drought.

The Cowboys will get a different test when they hit the road Sunday to face their first high-major opponent in South Carolina, but they're holding opponents to 32.7 shooting from the field counting their exhibition.

"That's obviously a point of emphasis with our team is the defensive end of the floor," said Mueller, who had a team-high seven rebounds. "To hold a team to 40 points, that's setting yourself up for success no matter who the team is."

A 3-pointer from Hendricks and back-to-back baskets from Maldonado sparked a 10-1 run that gave the Cowboys their biggest lead of the half at 16-8, but Wyoming didn’t create any real separation until Maldonado got hot down the stretch.

"I definitely feel better," Maldonado said. "Definitely feel like it's starting to be more smooth and in rhythm. At the same time, I've still got a lot of things I've got to get better at."

HOT AND COLD: Hunter Maldonado scored 28 of his career-high 32 points in the second half, and Wyoming yielded the fewest points against a Division I opponent in a season opener since the 1951-52 season.

Wyoming is setting the tone with defensive mindset

Cowboys have struggled to find scoring beyond Hunter Maldonado through the first two weeks of the season.

Wyoming's Hunter Maldonado shoots over an Idaho State defender during their game Tuesday at the Arena-Auditorium in Laramie.

Wyoming's Hunter Thompson dunks in the Cowboys' victory over Idaho State on Tuesday at the Arena-Auditorium in Laramie.