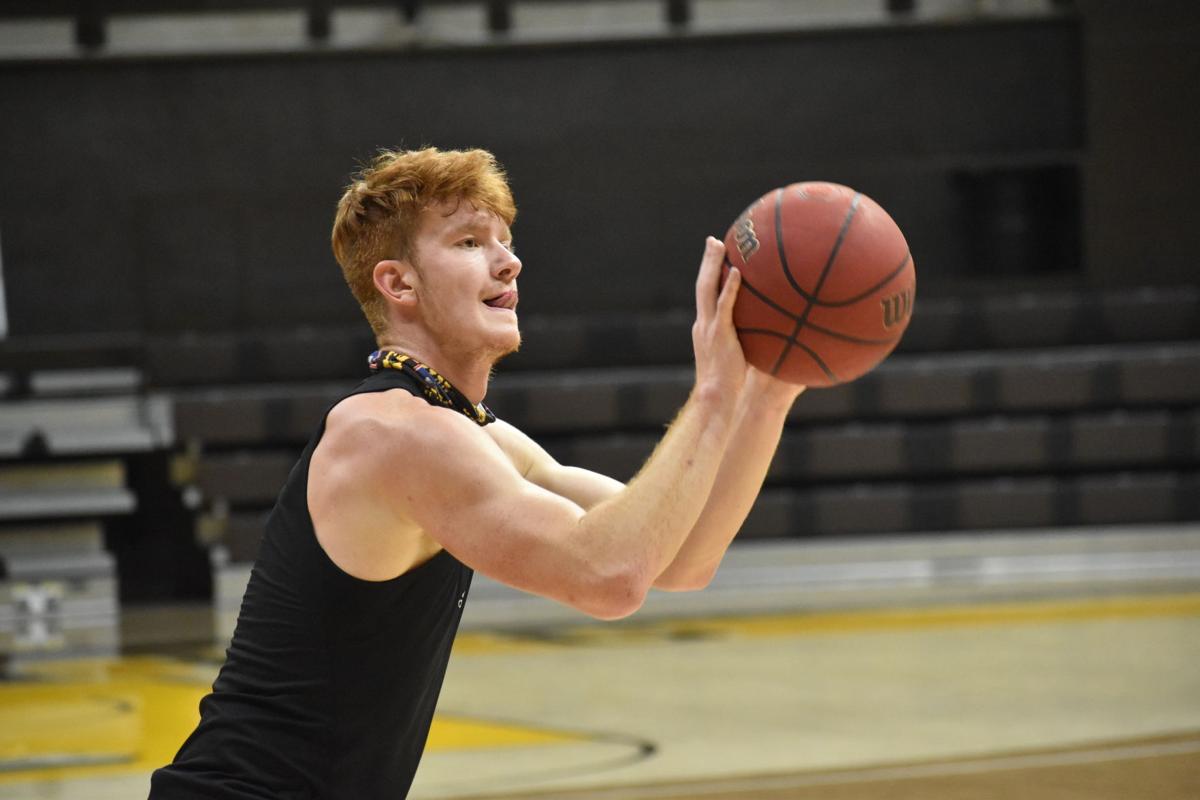 Wyoming guard Kenny Foster lines up a shot during a summer workout at the Arena-Auditorium in Laramie. Foster averaged just 4.4 points and shot less than 34 percent from the field during his freshman season, but the arrival of first-year coach Jeff Linder has helped boost Foster's confidence. 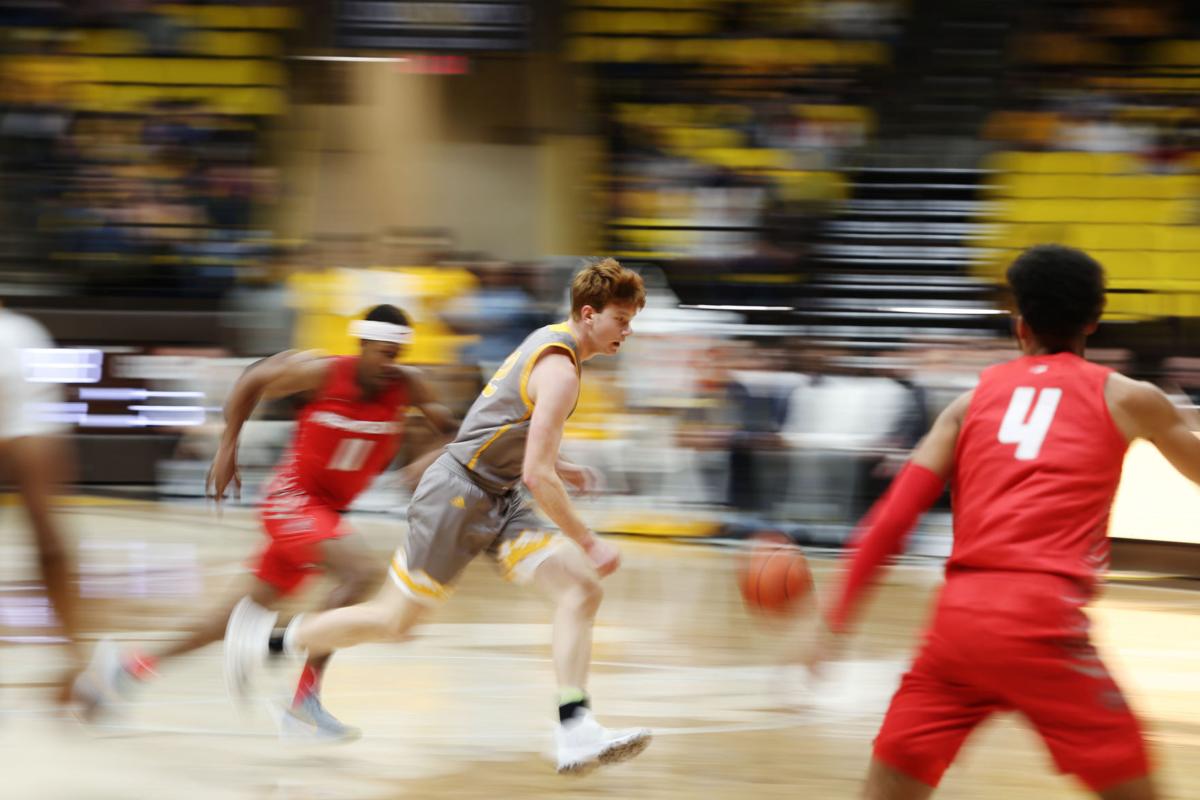 Wyoming's Kenny Foster brings the ball down the court in the Cowboys' game against New Mexico on Dec. 7, 2019 in Laramie.

LARAMIE — There was a time when one of the gems in Wyoming’s 2019 recruiting class thought he might be one and done as a member of the Cowboys’ basketball program.

To say Kenny Foster’s freshman season didn’t go as planned would be an understatement, and things only got worse in the spring. UW made a Cinderella run to the Mountain West tournament semifinals in early March, but it wasn’t enough to save Allen Edwards’ job.

Edwards was fired after UW fell to the bottom of the conference standings with its second straight single-digit win season — the worst stretch of UW basketball in nearly half a century. With the coach whom he’d signed to play for gone, Foster briefly wondered if a change of scenery might also do him some good, though his heart wanted to give the next coach a chance.

“I think in the back of my head, there was definitely a thought to enter the transfer portal,” Foster said. “But I wanted to see who was going to get hired here because I love the school. I love the people. I love the community of Laramie even more.”

What happened next took Foster by surprise.

On March 17, nine days after Edwards was let go, Jeff Linder was hired to replace Edwards after a highly successful four-year stint at Northern Colorado, a program Linder directed to three straight 20-win seasons. The same day he was hired, Linder made the drive to Denver and the surrounding area to re-recruit three of UW’s current players that call that part of the state home — leading scorer and rebounder Hunter Maldonado, Kwane Marble II and Foster, who played his prep ball at Smoky Hill High in Aurora, Colorado.

Linder’s effort to prioritize him just hours into his new job was all the convincing Foster needed to remain a Cowboy.

“As a returning player, you feel like with a coaching change that that coach doesn’t want you. He just wants new guys,” Foster said. “So seeing him get hired, come down and talk to us first and foremost and want to get our opinion on him and where we stand, that was huge for me.”

With Foster a part of the Cowboys’ plans going forward, the objective now is to get the 6-foot-5, 190-pound combo guard back to playing like the prized prospect Edwards and his staff coveted during Foster’s recruitment.

Foster was a scoring machine for Smoky Hill, finishing his high school career with 1,784 points. The stats were particularly eye-popping during a senior season in which he averaged 27.1 points, 10.8 rebounds, 4.8 assists and 1.8 blocks. Foster was a three-star recruit ranked as Colorado’s No. 4 overall prospect in 247Sports’ composite ratings, and he capped his prep career by being named Colorado’s Gatorade Player of the Year.

Edwards often cited Foster’s ability to score at all three levels (3-pointers, mid-range jumpers and at or close to the rim) as the reason for his offensive proficiency. And for a UW team that finished 321st out of 351 Division I teams in scoring during the 2018-19 season, the prevailing thought was Foster would make an immediate impact on that end of the floor.

As can often be the case for true freshmen, though, the transition from high school to the Division I level was both humbling and frustrating for Foster. He was part of the Cowboys’ regular rotation from Day 1 and averaged 20 minutes per game, but Foster scored eight points or less in UW’s first 12 games and was held to single digits in all but five of the 32 games he played.

“I think it’s hard as a freshman,” Linder said. “It’s hard sometimes when you don’t kind of know where your shots are coming from to be consistent.”

Foster’s struggle to consistently find his stroke became as much of a mental hurdle as anything he was trying to correct physically. He shot 33.6 percent from the field and just 22.1 percent from the 3-point line, a far cry from the kind of numbers he was used to as a prolific high school scorer.

“I didn’t have the season that I wanted, and I don’t think I had the season people were expecting me to have,” Foster said. “But I think the biggest thing I’ve been working on this year, more than just impacting the craft of my game and all of that, the thing I had the biggest trouble with last year was just the confidence level I had in myself with the speed and that change in the game.

“I had a shooting slump like halfway through the season where I just couldn’t get out of it, and I think that was the biggest attribution to the lack of confidence I had in myself.”

Foster ended his first collegiate season on a high note, knocking down 4 of 7 3-pointers en route to a season-high 18 points in UW’s Mountain West semifinal loss to Utah State. And with the arrival of Linder and a new offensive philosophy, Foster has started regaining more of that confidence.

“That run-and-gun kind of offense that Coach Linder likes, I think that fits me perfectly.”

One of Linder’s top priorities upon landing his new gig was to recruit more shooters for a UW team that’s ranked in the bottom half of the Mountain West in 3-point field-goal percentage three straight years. The Cowboys brought in what figures to be immediate help in that department with sharpshooter Drake Jeffries, who shot 44.8 percent from deep for Indian Hills Community College last season, and fellow junior college signee Drew LaMont, a stretch forward who knocked down nearly 41 percent of his 3s for Indian River State College a season ago.

But the Cowboys are also counting on Foster to help improve their efficiency from long distance.

In fact, leading up to the official start of practice earlier this week, Linder said Foster proved to be one of UW’s most consistent shooters during the offseason. The team got up more than 30,000 shots during summer workouts, all of which were charted, Linder said.

“And he’s a guy that basically shot 80 percent shooting spot-up shots,” Linder said. “I think it’s just one of those things where, as a freshman, sometimes it can be sporadic and you can lose some confidence. Just kind of getting him to get back and to believe that he can make shots and be a good player. That’s really what we’ve been focusing on. It’s not just what he’s doing on the court but mentally getting him back in the frame of mind where he can be a guy that can impact the game.”

Said Foster, “That has definitely been the most recent biggest (aspect of my game) that I’ve had to focus on just knowing how bad I shot from the 3-point line last year. That was the first step I needed in building my confidence was the shooting part of my game.”

But it’s not just putting the ball in the basket that UW is expecting more of from Foster this season. He’s a cerebral player who understands spacing. And as his high school stats show, Foster is just as capable of creating scoring opportunities for teammates and helping out on the boards from time to time, all of which are important facets to the kind of game UW wants to play under its new coach.

“He’s our best player in terms of moving without the basketball,” Linder said. “He makes the game a lot easier for those other guys, especially when teams start ball watching. He’s got a natural ability to know how to cut and get easy baskets, and so I just want to see how he continues to develop hopefully once we start playing games.”

Everyone involved is eager to see what Year 2 will bring starting with Foster himself.

“The game is slowly coming back to me,” Foster said, “and I’m feeling a lot more confident about who I am now.”

STILL HERE: After briefly contemplating a transfer in the offseason, Wyoming guard Kenny Foster is back for his sophomore season with the Cowboys

HE SAID IT: "I’m feeling a lot more confident about who I am now." -- Foster.

Wyoming gets practice underway, continues to work on non-conference slate

Cowboys, who held their first official practice Thursday, are tentatively scheduled to start the season in a multi-team event in late November.

Cowboys struggled from distance the past couple of seasons.

Wyoming guard Kenny Foster lines up a shot during a summer workout at the Arena-Auditorium in Laramie. Foster averaged just 4.4 points and shot less than 34 percent from the field during his freshman season, but the arrival of first-year coach Jeff Linder has helped boost Foster's confidence.

Wyoming's Kenny Foster brings the ball down the court in the Cowboys' game against New Mexico on Dec. 7, 2019 in Laramie. 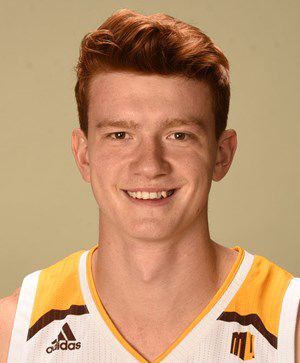