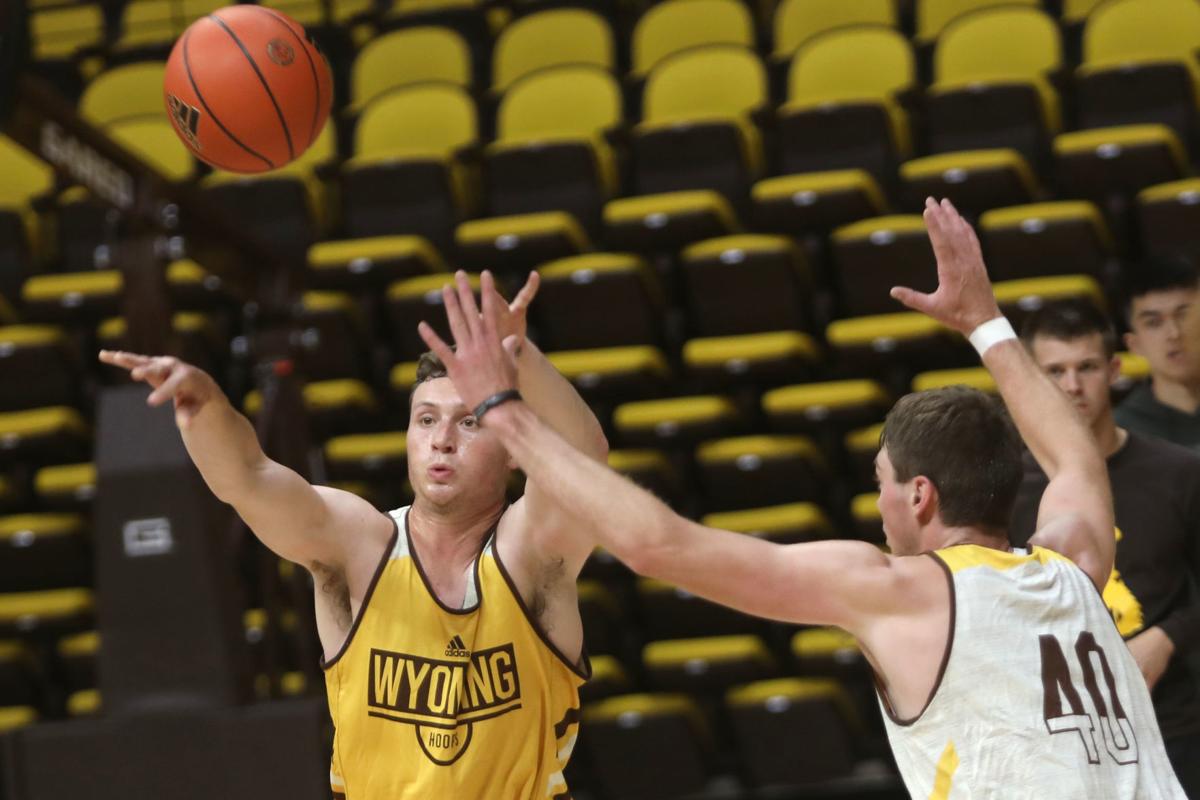 Wyoming's Austin Mueller passes the ball while being guarded by Haize Fornstrom during a drill at practice on Oct. 2, 2019, at the Arena-Auditorium in Laramie. 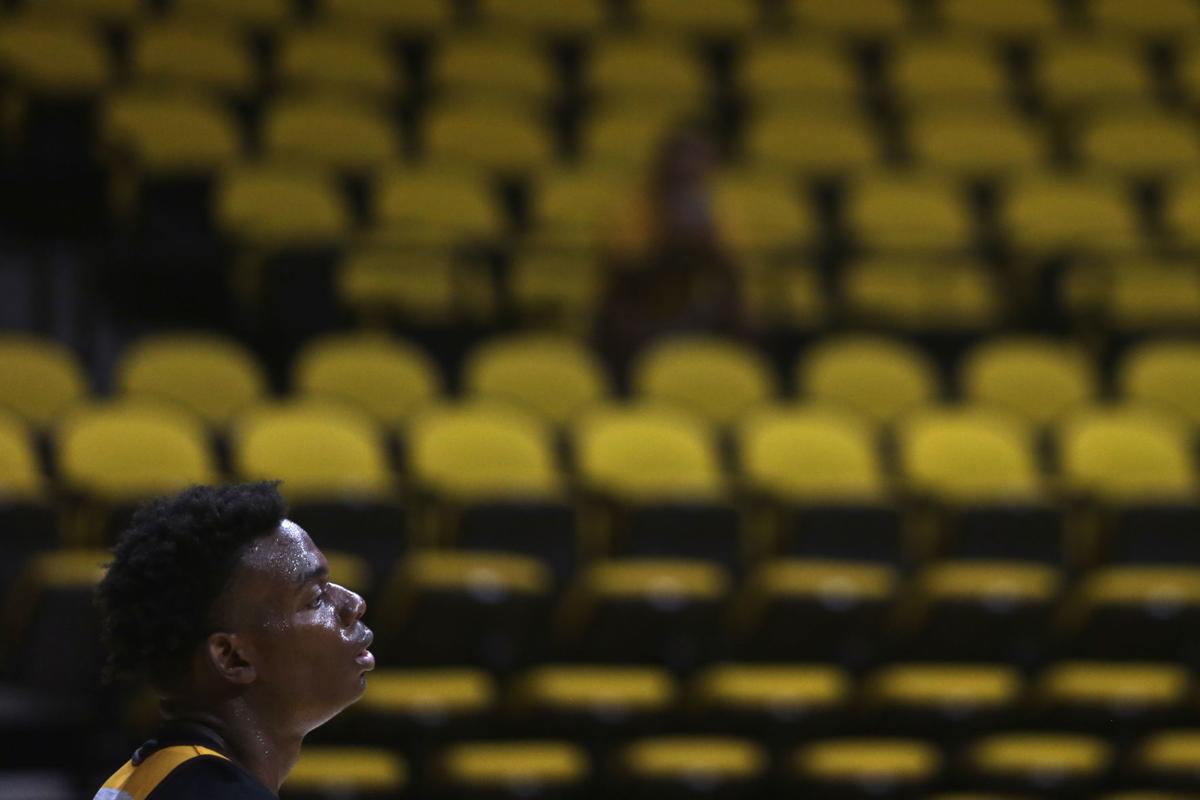 Wyoming's Tyler Morman catches his breath while listening to instructions from a coach during practice Oct. 2, 2019, at the Arena-Auditorium in Laramie.

Forwards Austin Mueller and Tyler Morman will be sidelined for an extended period of time if not for the rest of the season, Wyoming coach Allen Edwards said Monday. The news came two days before the Cowboys, who are still seeking their first win in Mountain West play, get perhaps their biggest test all season from No. 7 San Diego State — one of two unbeatens left in college basketball — Wednesday at the Arena Auditorium.

It could end up being a second straight season-ending injury for Mueller, who is having his right knee scoped, Edwards said. It’s the same knee in which the 6-foot-6 sophomore sustained a torn ACL last December. Mueller, who’s averaged 1.3 points and 1.3 rebounds in the 12 games he’s played this season, has watched the Cowboys’ last two games from the bench.

Edwards said Mueller will be out six to eight weeks, a timeline that would have him returning in mid-February at the earliest. But Edwards wasn’t optimistic about Mueller or Morman playing again this season.

“We’re planning not to have either one for the rest of the year,” Edwards said.

Morman has played in just two games after sustaining a concussion in Wyoming’s exhibition win over Northwest Nazarene on Oct. 30. A junior college transfer, the 6-9, 220-pound Morman quickly impressed with his rebounding and interior defense after arriving on campus and averaged 2.5 rebounds in his limited action this season.

He made his season debut against Utah Valley on Dec. 18 and logged a season-high 20 minutes at Denver on Dec. 21, but symptoms from the concussion continued to persist. Morman hasn’t played in Wyoming’s last two games, and given his history with the injury, Edwards said the Cowboys aren’t going to chance it at this point.

“That’s going down the road of a medical redshirt because of previous concussions before he got here and how quickly he had the concussion coming back,” Edwards said.

That leaves Hunter Thompson, sophomore Brandon Porter and true freshman Javier Turner as the Cowboys’ viable options in the frontcourt, though Porter, who’s started the last three games, logs most of his minutes on the perimeter. Turner, at 6-11, has played a total of 10 minutes in three games this season.

Wyoming dropped a 72-61 decision at Colorado State its last time out to fall to 0-4 in MW play. The Cowboys have lost 19 of their last 23 league games dating back to last season.

Wyoming's Austin Mueller passes the ball while being guarded by Haize Fornstrom during a drill at practice on Oct. 2, 2019, at the Arena-Auditorium in Laramie.

Wyoming's Tyler Morman catches his breath while listening to instructions from a coach during practice Oct. 2, 2019, at the Arena-Auditorium in Laramie. 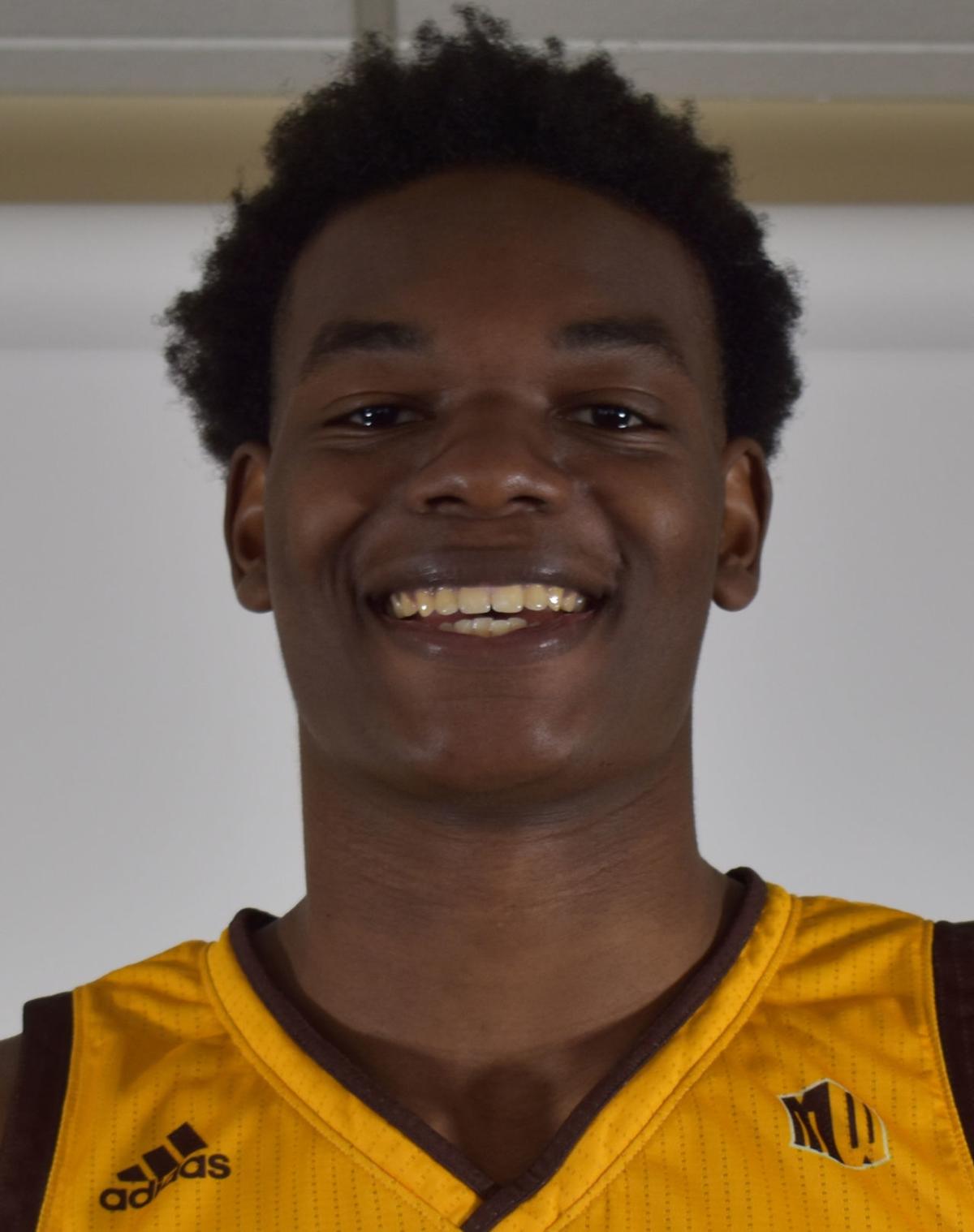