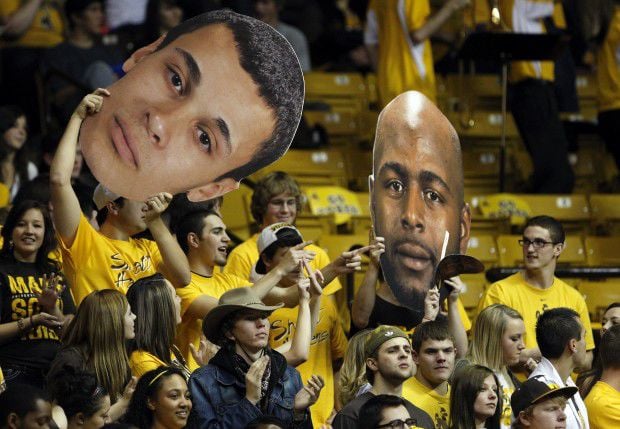 Wyoming fans hold up cutouts of players Larry Nance Jr., left, and Leonard Washington during a game against San Diego State on Jan. 19. 2013 at the Arena-Auditorium in Laramie. 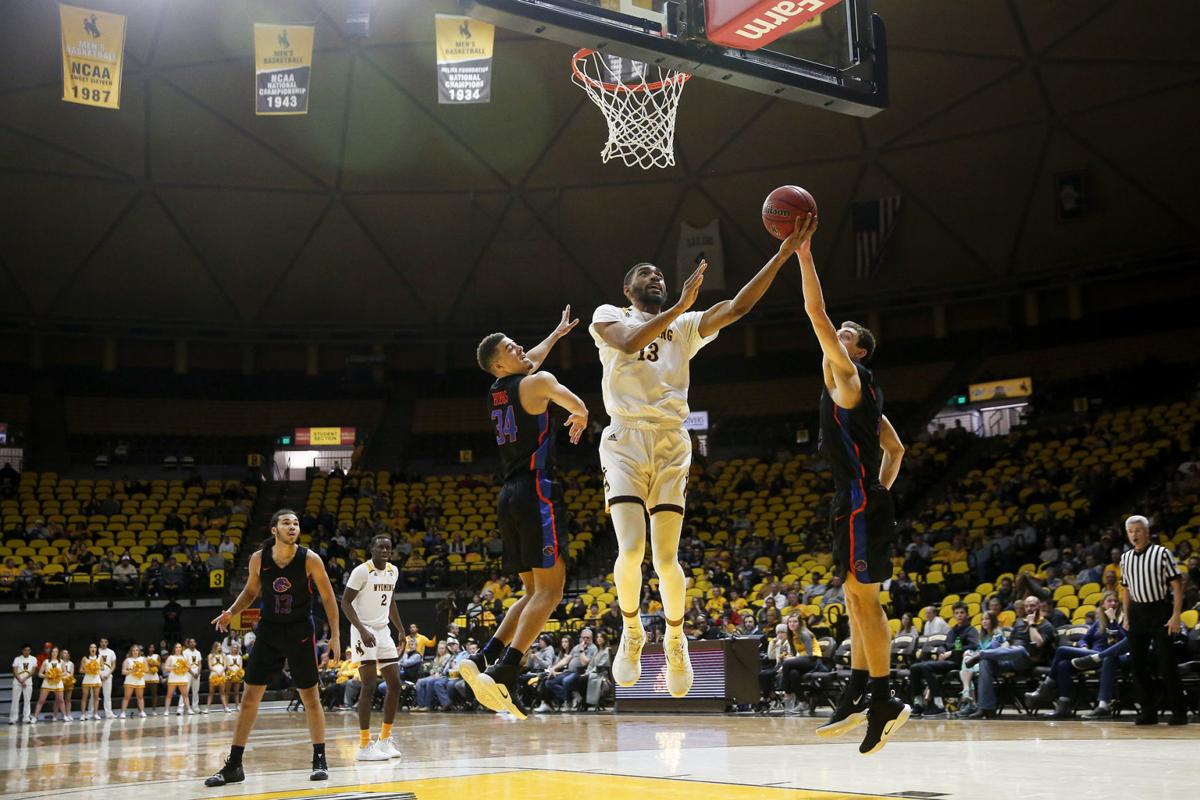 Wyoming's TJ Taylor drives to the basket during the Cowboys' game against Boise State on Jan. 2, 2019, at the Arena-Auditorium in Laramie. The Cowboys have averaged just 3,562 fans in attendance the last two seasons. 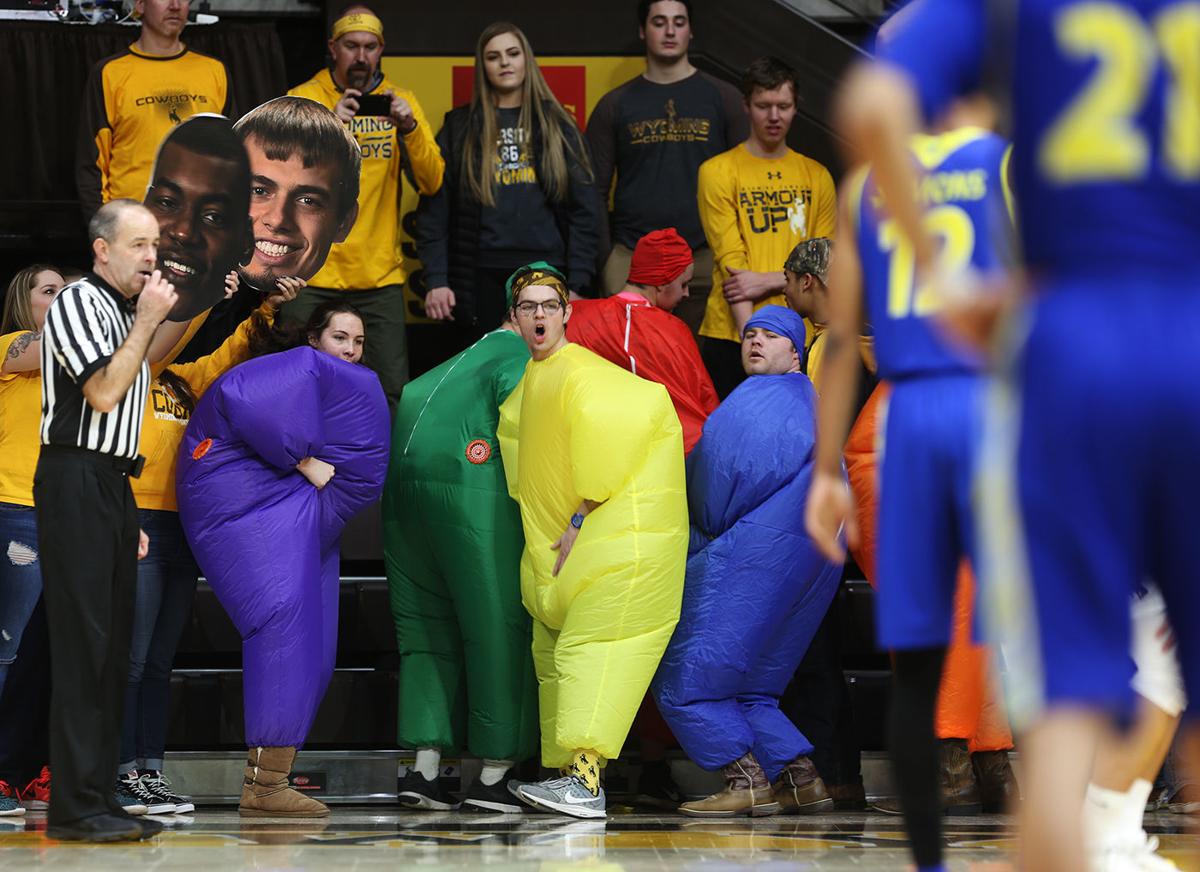 Wyoming fans try to distract San Jose State players during a free-throw attempt on Feb. 17, 2018, at the Arena-Auditorium in Laramie.

LARAMIE — Instead of getting ready to embark on his fifth season at Northern Colorado, Jeff Linder is preparing for his first at Wyoming.

The primary reason for that is a familiar one in the results-based business of being a Division I college basketball coach: Winning. Or in UW’s case, a lack thereof.

Linder’s success at UNC made him a prime target for UW, which hasn’t experienced much of it the last two seasons. Linder, who won 61.5 percent of his games with the Bears (80-50) before being hired at UW last week, is taking over a program that’s won just 17 games the last two seasons.

The Cowboys, who finished last in the Mountain West standings this season for the first time since joining the league in 1999, has posted back-to-back single-digit win seasons. That hasn’t happened since UW won just 13 games from 1972-74.

But Linder isn’t exactly preaching patience when it comes to turning things around.

“I wouldn’t have left my situation there (at UNC) if I didn’t feel like we could have a winning team here from Day 1,” said Linder, who signed a five-year contract that will pay him $485,000 ($225,000 in base salary and $260,000 in additional guaranteed compensation) in the first year. “The core group that’s in place and the experience they got last year, you add some pieces to those players, I think it’s not unrealistic to do some great things. It’ll take a lot of hard work, and guys are going to have to adjust to a different system. But I do believe with what we have right now and by adding a few pieces that we can get there.”

Another reason Linder feels that way is the building he’ll be coaching in, one that comes with the organic advantage of being perched at the highest altitude in college athletics.

The 7,220 feet of elevation is as synonymous with UW athletics as the Black 14; Josh Allen; or the creator of the jump shot, Kenny Sailors. The school markets it inside and out of many of its athletic facilities, including the Arena-Auditorium.

“I believe we should have the best home-court advantage of any team in the country,” Linder said.

The 11,612-seat basketball arena is nicknamed the Dome of Doom because of UW’s general success in its own building — the Cowboys have won 71 percent of their games at the Arena-Auditorium — and the respiratory challenge it can present players making the trip from sea level, though that’s hardly been a doomsday scenario for opposing teams as of late.

UW has won just 30.3 percent of its home games the last two seasons. This season, the Cowboys won just four times at the Arena-Auditorium and went winless in their own building in nine games against MW competition. Attendance has plummeted during that time with the Cowboys drawing an average of 3,164 fans this season — the lowest home attendance of Edwards’ four-year tenure.

Linder’s UNC team attributed to those struggles this season. The Bears traveled to Laramie on Dec. 14 and handed the Cowboys a 74-53 loss, UW’s second-largest margin of defeat at home all season. Only an announced crowd of 3,083 was there to see it.

But Linder remembers when the environment was much more intimidating. Before his time at UNC, Linder spent six seasons as an assistant at Boise State, where he sat on the visitors’ bench whenever the Broncos made the trip to the Arena-Auditorium.

With players like Riley Grabau, Josh Adams and Larry Nance Jr. coming through the program at that time, UW had four winning seasons from 2010-16 and made its most recent NCAA Tournament appearance in 2015 after winning the MW Tournament. The Cowboys averaged 5,309 fans at home during that span and topped out at 6,310 during that 2014-15 season, according to the NCAA men’s basketball Division I attendance summary.

“When I was at Boise State and coach (Larry) Shyatt was here with the team they had competing for a Mountain West championship, I saw how the arena was rocking and rolling,” Linder said. “That was a big thing for me in making the move. There are just so few universities in colleges now around the country where people really truly care about college athletics and college basketball. There are just so many things going on, and you’re seeing a decline in attendance because it’s easy to watch on TV or watch on your phone. I just think the University of Wyoming, it’s the only show in the state. In Colorado, it’s the Denver Broncos. Well in Wyoming, the Wyoming Cowboys are that.”

Trying to use the altitude to their advantage doesn’t necessarily mean Linder’s Cowboys are going to get up and down the court at warp speed to try to leave opponents gasping for air. Linder said he’s more concerned about efficiency than tempo, particularly when it comes to operating from beyond the arc.

“It’s not necessarily about playing fast,” Linder said. “We’re going to play fast, but we’re not going to play stupid either. We’re going to make sure we get the right shots. There’s a lot of different ways to take advantage of the altitude and elevation.”

However UW does it, Linder knows the Cowboys will need to win far more than they’ve done the last two seasons in order to revive the energy inside the Arena-Auditorium that Linder vividly remembers.

“That’s what really excited me is just that people really care and have pride about the University of Wyoming,” Linder said. “That’s something we have to build on. I know if we can get people back in the stands and win some games, we can have as good of a home-court advantage as anybody in the country.”

Wyoming fans hold up cutouts of players Larry Nance Jr., left, and Leonard Washington during a game against San Diego State on Jan. 19. 2013 at the Arena-Auditorium in Laramie.

Wyoming's TJ Taylor drives to the basket during the Cowboys' game against Boise State on Jan. 2, 2019, at the Arena-Auditorium in Laramie. The Cowboys have averaged just 3,562 fans in attendance the last two seasons.

Wyoming fans try to distract San Jose State players during a free-throw attempt on Feb. 17, 2018, at the Arena-Auditorium in Laramie.