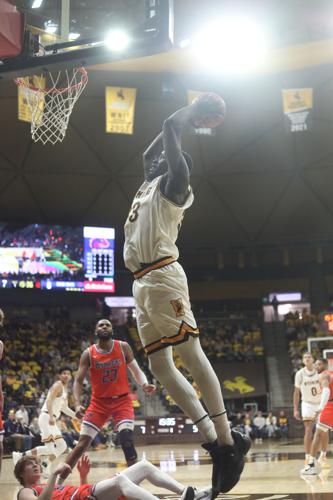 Wyoming's Graham Ike goes up for a dunk during the Cowboys' 72-65 victory over Boise State on Feb. 3 at the Arena-Auditorium in Laramie. 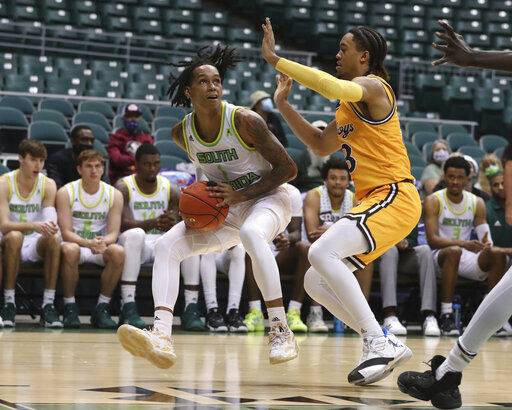 LARAMIE – Hunter Maldonado is coming back to play for the Pokes with fellow super senior Hunter Thompson.

And Wyoming will be among the hunted in the Mountain West in 2022-23.

The Cowboys, picked to finish tied for eighth last season, will likely receive first-place votes in the MW preseason poll and votes in The Associated Press preseason top 25 in October.

Maldonado and fellow all-MW first team selection Graham Ike will lead one of the deepest rosters in program history after the Pokes finished 25-9 overall last season with an NCAA Tournament appearance.

Colorado State star David Roddy, the reigning MW player of the year, has until Wednesday to decide whether to keep his name in the NBA draft.

The Pokes have an abundance of starting experience in the backcourt (Xavier DuSell, Brendan Wenzel, Kenny Foster) and at the forward spots (Jeremiah Oden, Thompson) beyond their two headliners.

San Diego State is still the presumed MW favorite with the return of all-conference second-team selection Matt Bradley and defensive player of the year Nathan Mensah.

CSU will obviously be a serious contender if Roddy keeps his talents in Fort Collins. The Rams return veterans Isaiah Stevens, John Tonje and James Moors but have lost key role players Kendle Moore (Missouri State) and Dischon Thomas (Montana) to the portal.

The Broncos will try to reload around MW freshman of the year Tyson Degenhart and all-MW second-team selection Marcus Shavers.

One team that could be a surprise contender, like UW was last season, is New Mexico under second-year head coach Richard Pitino.

The Lobos are expected to return the dynamic backcourt dup of Jaelen House and Jamal Mashburn Jr. and have upgraded their front court with the addition of transfers Morris Udeze (Wichita State) and Josiah Allick (Kansas City).

Fresno State, Nevada, UNLV and Utah State are rebuilding after losing their star players to the draft and/or the portal. Air Force and San Jose State are projected to remain at the bottom of the MW pecking order.

He's back: Hunter Maldonado, Wyoming's all-time assists leader, has withdrawn from the NBA draft to make one last ride with the Cowboys

The sixth sense: After testing the NBA draft waters, Hunter Maldonado is back in Laramie preparing to lead the Pokes as a super senior.

Pokes in the pros: Wyoming Cowboys sharpshooter Drake Jeffries expects to get an opportunity to play in the NBA, even if his name is not called in Thursday's draft.

Wyoming's Graham Ike goes up for a dunk during the Cowboys' 72-65 victory over Boise State on Feb. 3 at the Arena-Auditorium in Laramie.